Small cell lung cancer (SCLC) accounts for approximately 13% of bronchogenic carcinomas (1). According to a report from the World Health Organization, there will be 287,683 new cases of SCLC globally in 2020 (2) and 29,660 new cases in the United States (3). Compared with non-SCLC (NSCLC), SCLC has higher metastatic potential and poorer survival outcomes. For patients with limited-stage SCLC, chemo-radiotherapy has been the standard treatment since the early 1970s based on two prospective randomized clinical trials from the Medical Research Council in 1973 (4) and the Lung Cancer Study Group in 1994 (5), which demonstrated that surgery had no benefit for patients with SCLC. After 2000, with a number of retrospective studies indicating potential benefits on 5-year survival in patients with SCLC who underwent surgery (6-9), surgical treatment combined with chemotherapy is recommended in patients with limited disease without lymph node metastasis (10,11). Thus, the role of surgery for SCLC is being reevaluated. However, studies reevaluating the status of surgery are retrospective studies or small-scale phase II clinical trials, and the indications for surgery were also uncertain, ranging from the most stringent standard of stage I (12,13) or “peripheral small lesions” (14) to the broadest standard of “refer to the surgical principles of NSCLC” (15) or limited-period SCLC (Tx-4Nx-2M0) (16).

In view of the fact that these retrospective studies have defects, such as lack of suitable control groups (6,7,17,18), indiscrimination in treating different stages of SCLC separately (6,7,15), and the large time span of patients in these studies (6,7,19,20), they do not provide high-quality evidence. Therefore, surgery with adjuvant chemotherapy is recommended for the treatment of clinical stage T1–2N0M0 SCLC in National Comprehensive Cancer Network guidelines (21). Furthermore, because of lack of surgical samples from patients with severe SCLC, to date, more studies are needed to evaluate the role of surgery in multidisciplinary treatment for patients with stage IIIA SCLC.

We present the following article in accordance with the STROBE reporting checklist (available at http://dx.doi.org/10.21037/jtd-20-3047).

The study was conducted in accordance with the Declaration of Helsinki (as revised in 2013). The study was approved by ethics board of K20-196Y and individual consent for this retrospective analysis was waived.

Survival was compared between patients who underwent CRT and those who underwent S+C. A survival analysis was performed using the Kaplan-Meier method. Multivariate Cox regression models were used to identify relevant variables affecting survival. All clinically significant variables were included in the model.

A two-sided P value of <0.05 was considered statistically significant. The statistical analysis was performed using SPSS 23.0 (SPSS Inc., Chicago, IL, USA), and survival curves were drawn using GraphPad Prism 6.0 (GraphPad Software, San Diego, CA, USA). The primary outcome was overall survival (OS). OS was defined as the time from diagnosis to death or final follow-up. Patients who were not deceased were censored on the date they were last known to be alive. Patient outcomes were measured up until June 30, 2017.

Comparisons of patient characteristics between patients with clinical stage IIIA SCLC who underwent S+C and patients who underwent CRT were performed using the Student’s t-test for continuous variables and Pearson’s χ2 test or the Mann-Whitney U test for categorical variables. 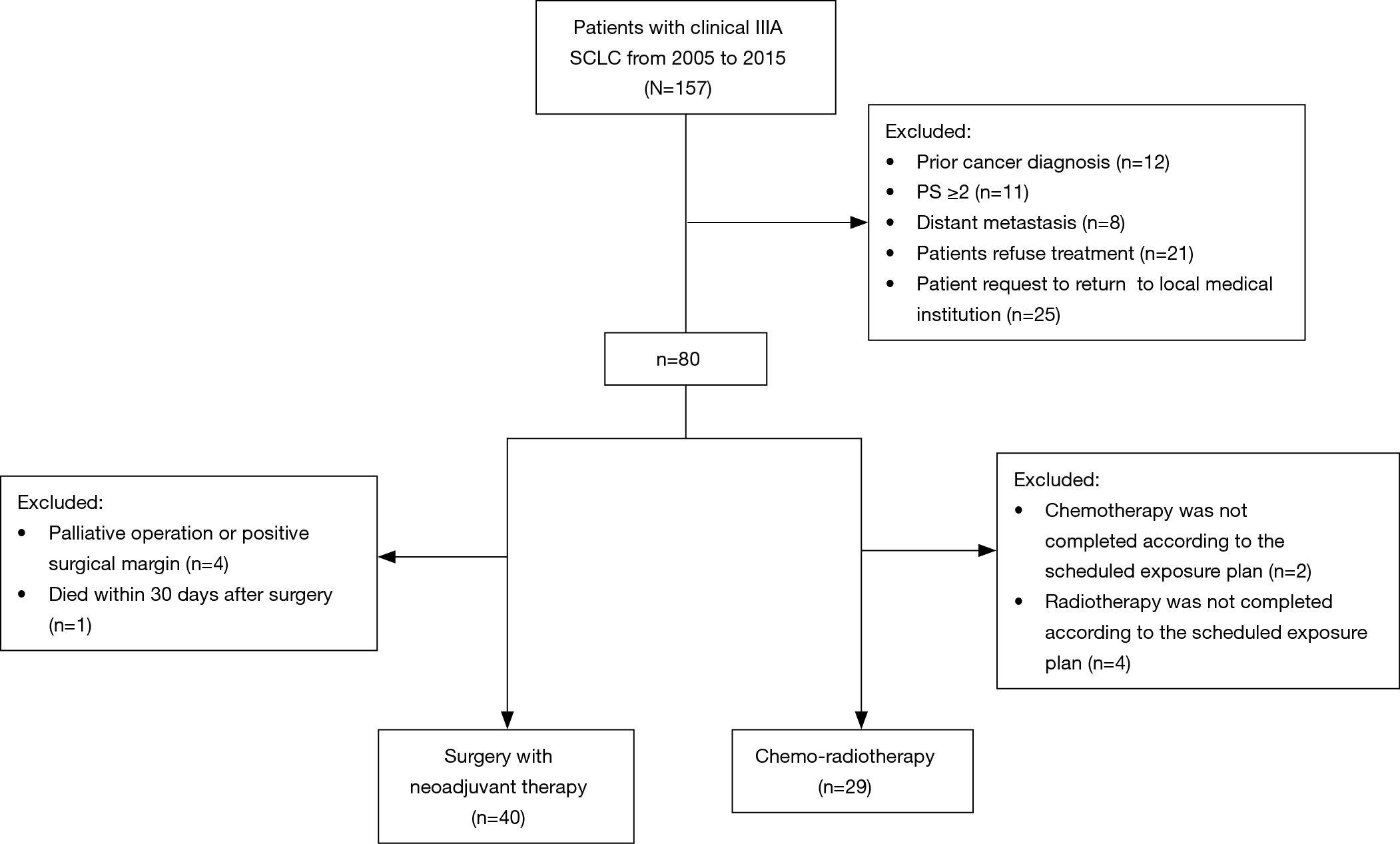 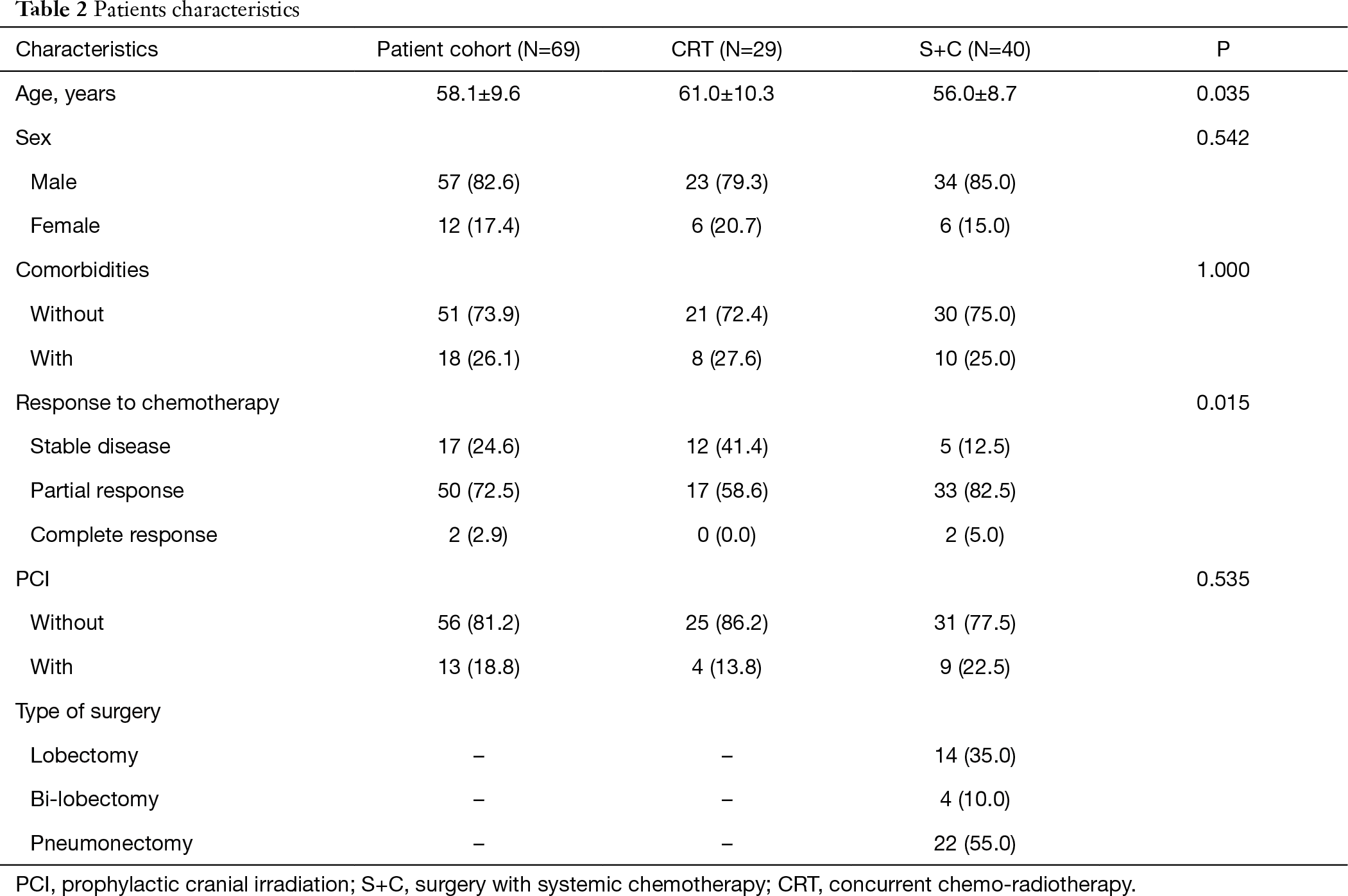 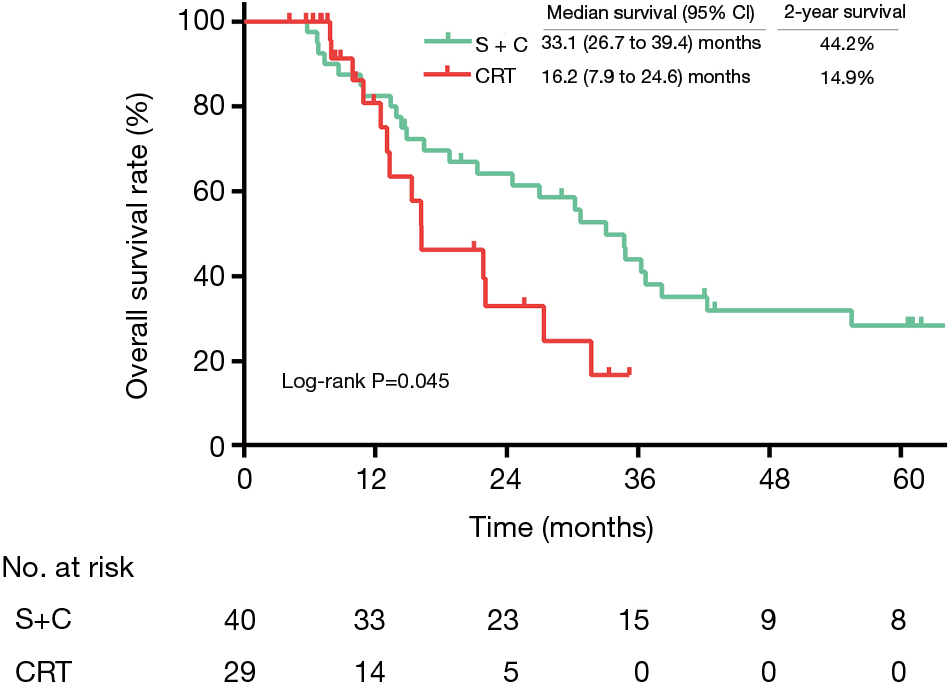 To our knowledge, surgery is still controversial in patients with SCLC, particularly in patients with severe SCLC, as shown in two prospective randomized studies (4,5). However, these two studies had some limitations. First, they lacked use of modern imaging staging methods, such as CT, PET-CT, and MRI, and modern mediastinal lymph node staging methods, such as EBUS-TBNA; thus, SCLC staging might be inaccurate. Second, both of these studies excluded patients with SCLC with peripherally isolated lesions without lymph node metastasis, for whom surgery would have had the most benefit. Third, patients in the surgery group did not achieve complete surgical resection. Specifically, some patients underwent open-chest exploration only or palliative resection. Fourth, neither of the studies used a platinum-based chemotherapy regimen, which might limit the effect of neoadjuvant chemotherapy and postoperative chemotherapy. Therefore, due to the difficulty in conducting prospective studies for patients with SCLC due to the limited number of patients with SCLC undergoing surgery, high-quality retrospective studies with comparisons between groups are essential to advance our understanding of the role of surgery for SCLC.

From current National Comprehensive Cancer Network guidelines (21), chemoradiotherapy with adjuvant PCI is suggested as an initial treatment for patients with limited stage IIIA SCLC. Stinchcombe et al. found that OS in older patients was 17.8 months, and OS in younger patients was 23.5 months (23). Hara et al. found that OS for patients with stage IIIA SCLC with CRT was 14 months (19). In our study, OS in the CRT group was 20 months, which is consistent with the literature (19,23). The 30 years when chemotherapy was the first-line therapy for SCLC (24), as well as the EP (cisplatin + etoposide) and EC (carboplatin + etoposide) schemes, laid the foundation for chemotherapy for SCLC (25-27). However, the OS of patients with SCLC has now reached a bottleneck.

In our study, OS in the S+C group was 32.5 months, which was significantly different compared with the CRT group (20.0 months, P=0.045). In 1995, Hara et al. found that OS in patients with stage IIIA SCLC who underwent surgery and chemotherapy was 16.5 months, while the non-surgery group had an OS of 14.0 months (19). Recently, with the application of adjuvant chemotherapy and the video-assisted thoracic surgery (VATS), the OS of patients with SCLC has prolonged. Zhang et al. showed a 5-year survival rate of 36% (28). Wang et al. showed a 5-year survival rate of 46.5% (29). The main purpose of surgical treatment is to remove the primary tumor, prevent recurrence, and reduce tumor burden. As part of the multidisciplinary treatment for SCLC, the role of surgery is becoming increasingly obvious.

There are several limitations in the present study. First, due to the inherent properties of retrospective studies, selection bias may exist; specifically, patients in the S+C group were younger than patients in the CRT group, and the longer OS of patients in the S+C group might have been caused by their younger age. Patients in the S+C group also had a better response to induction chemotherapy. However, after adjusting for age and chemotherapy response, S+C was still an independent factor associated with OS. Second, the setting of exclusion criteria in the CRT group should be more considerable because all the patient candidates to the treatment should be included, regardless of their completion, which could lead a longer OS in the CRT group. Third, since pathological staging in the medical treatment group is difficult to obtain, this study used clinical staging, which is less accurate than pathological staging. Fourth, this study selected patients from 2005 to 2015, with the last follow-up in 2017, because of the high loss ratio of follow-up after 2017. Further follow-up may help to get more accurate conclusions

Patients with clinical stage IIIA SCLC treated with surgical resection plus chemotherapy were associated with longer OS compared with those who underwent CRT. This conclusion needs further confirmation in prospective studies in the future.

Reporting Checklist: The authors have completed the STROBE reporting checklist. Available at http://dx.doi.org/10.21037/jtd-20-3047

Conflicts of Interest: All authors have completed the ICMJE uniform disclosure form (available at http://dx.doi.org/10.21037/jtd-20-3047). The authors have no conflicts of interest to declare.

Ethical Statement: The authors are accountable for all aspects of the work in ensuring that questions related to the accuracy or integrity of any part of the work are appropriately investigated and resolved. The study was conducted in accordance with the Declaration of Helsinki (as revised in 2013). The study was approved by ethics board of K20-196Y and individual consent for this retrospective analysis was waived.