Lung cancer is a major cause of cancer death worldwide (1). Globally, there were 20 million new cases of tracheal, bronchial, and lung cancer and 1.7 million deaths from these conditions in 2016, representing a 28% increase in incidence between 2006 and 2016 (2); thus, new developments in lung cancer treatment are essential.

According to a database of patients who underwent surgery in Japan (3), the 5-year survival rates of patients with stage IIA, IIB, and IIIA disease (reclassified with respect to clinical stage from the TNM classification seventh edition to the eighth edition) were 60.2%, 58.1%, and 50.6%, respectively. Distant metastasis was the most common form of recurrence in patients who had undergone complete resection, indicating that control of micrometastases at the time of resection improves prognosis of these patients. Therefore, adjuvant chemotherapy is the accepted standard of care, largely based on the results of several randomized trials and meta-analyses (4-6). Adjuvant vinorelbine plus cisplatin is widely accepted as a standard regimen for completely resected non-small cell lung cancer (NSCLC). Although a subgroup analysis (7) of the LACE study (6) reported an 8.9% 5-year survival improvement compared to surgery alone, the adjuvant therapy completion rate was 43% due to patient refusal and adverse events. Adverse events sometimes require reduced chemotherapy doses or even discontinuation. Among patients with stage I-III NSCLC, it has been reported that 42% of patients were expected to receive chemotherapy at a relative dose intensity (RDI) <85% of the standard dose due to dose-limiting toxicities, but 63% of patients actually received an RDI <85% (8). The inability to provide patients with a sufficient amount of drug may limit their survival outcomes.

S-1 is a tegafur-uracil-based, second-generation anticancer agent that contains tegafur, gimeracil (an inhibitor of dihydropyrimidine dehydrogenase, which decomposes fluorouracil), and oteracil (which inhibits the phosphorylation of fluorouracil in the gastrointestinal tract, thus decreasing associated gastrointestinal toxicity) in a 1:0.4:1 ratio (9). Administration of S-1 monotherapy following complete resection of stage IB-IIIA NSCLC has been shown to be safe, with adequate compliance (10). A randomized phase 3 study in Japanese patients with advanced NSCLC (11) demonstrated that survival associated with S-1 plus cisplatin was not inferior to that of docetaxel plus cisplatin, and both adverse events and quality of life were superior among patients who received S-1 plus cisplatin. To sufficiently enhance the efficacy of chemotherapy, it is necessary to administer a sufficient amount of anticancer drugs. Despite the introduction of new agents and regimens, 5-year survival had improved <10%, and new treatment strategies and drugs are required to further improve the prognosis of patients with resectable NSCLC.

The objective of this study was to investigate the acceptability and feasibility of using 4 courses (5-week cycles) of combination therapy with S-1 and cisplatin as postoperative adjuvant chemotherapy following complete resection of pathological stage II-IIIA NSCLC.

We present the following article in accordance with the TREND reporting checklist (available at http://dx.doi.org/10.21037/jtd-20-3293).

This study was a multicenter phase 2 clinical trial, for which registration started in February 2013 in five centers in Japan. The study was conducted in accordance with the Declaration of Helsinki (as revised in 2013). This study was approved by the ethics committee of Toho University Omori Medical Center (approved number: M17050) and was registered on the UMIN clinical study registration site (protocol ID: UMIN000016191) (Retrospectively registered). Written informed consent was obtained from all patients. Patients were treated with S-1 twice daily for 21 days at an initial dose determined by body surface area (BSA) [BSA <1.25 m2: 40 mg/dose (80 mg/day); 1.25 ≤ BSA <1.5 m2: 50 mg/dose (100 mg/day); BSA ≥1.5 m2: 60 mg/dose (120 mg/day)] followed by a 14-day drug holiday, during which they were also given cisplatin 60 mg/m2 on day 8. This 35-day period constituted 1 cycle, and treatment was repeated for 4 cycles. Pre- and post-treatment hydration and antiemetics were administered in accordance with the standard methods employed at each site. The study was continued, except in the following situations: when 21 days had elapsed after the scheduled start date of treatment, when the dose needed to be reduced due to a further adverse event after the two-step dose reduction of S1, when recurrence was observed, when the patient requested withdrawal of treatment, or when the attending physician judged that the trial should not be continued for any other reason. 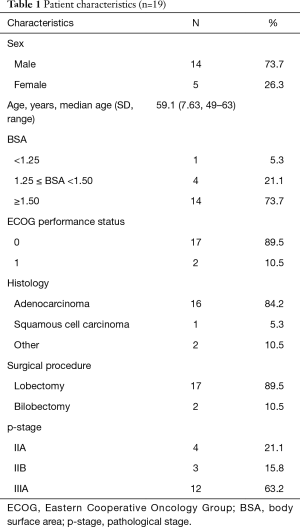 Patients in this study underwent a total of 60 cycles. The completion rates and implementation status are shown in Table 2. Fourteen (68.4%) patients completed 4 cycles. Three patients discontinued the study due to adverse events, which included grade 3 gastrointestinal symptoms (nausea) in all cases during the first cycle. Those patients refused to continue in the trial without accepting a dose reduction in the next cycle. Recurrence was detected after the completion of 2 cycles in 1 patient (the sites of recurrence were the lung and the brain) and after the completion of 3 cycles in 1 patient (the patient developed carcinomatous pleurisy). Furthermore, 1 patient discontinued treatment during the second cycle due to another disease (ruptured aortic aneurysm). The administration status of S-1 plus cisplatin is described in Table 3. Among patients who received more than 2 cycles, planned dose reduction was required in only 2 cases, with the doses of both S-1 and cisplatin reduced in 1 patient and only the dose of S-1 reduced in the other patient; both of these patients completed 4 cycles. The median RDI was 79%±32% for S-1 and 80%±32% for cisplatin. Overall, 68.4% of patients achieved an actual RDI ≥85%. 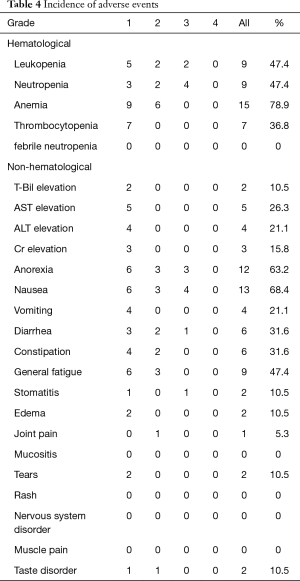 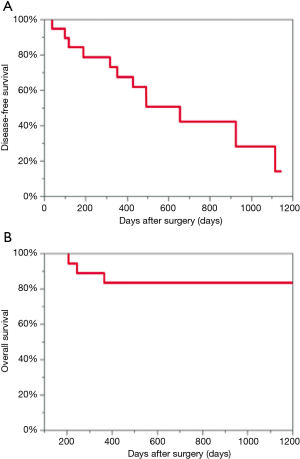 This study demonstrated the feasibility of combination therapy with S-1 plus cisplatin as postoperative adjuvant chemotherapy following complete resection of pathological stage II–IIIA NSCLC. The 4-cycle completion rate, the primary endpoint of this clinical trial, was 68.4%, and no grade 4 adverse events or deaths occurred throughout the 4 cycles. The most common grade 3/4 adverse events were neutropenia and gastrointestinal adverse events including nausea, vomiting, anorexia, and diarrhea. In addition, febrile neutropenia (FN) was not observed in any patient. 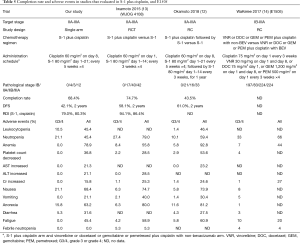 Table 5 Completion rate and adverse events in studies that evaluated in S-1 plus cisplatin, and E1505
Full table

Neutropenia is the major dose-limiting toxicity of many chemotherapy regimens. FN is defined as neutropenia with fever, usually indicative of infection, and can be fatal. The mortality rate associated with FN has been estimated to be 9.5% (15). In a nationwide prospective cohort study in the United States (8), FN occurred in 6.4% of patients in the first cycle of myelosuppressive chemotherapy, and cumulative events occurred over 4 cycles in 11% of patients. The JBR.10 study (inclusion period, 1994–2001) (4) and the ANITA study (inclusion period, 1994–2000) (5), which were analyzed in the LACE trial and led to the wide acceptance of the adjuvant vinorelbine plus cisplatin regimen, reported 73% and 85% rates of grade 3 and 4 neutropenia, respectively, and 7% and 9% rates of grade 3 and 4 FN, respectively. Recently, the results of the E1505 trial (inclusion period, 2007–2013) (14) were published. This study was a phase 3 randomized trial that compared the combination of vinorelbine, docetaxel, gemcitabine, and pemetrexed plus cisplatin with and without bevacizumab (BEV) as postoperative adjuvant chemotherapy after resection of pathological stage IB-III NSCLC. Not only was the addition of BEV ineffective in improving prognosis, but grade 3–5 adverse events occurred more frequently in the BEV arm. Rates of grade 3–5 neutropenia were 33% and 37% in the non-BEV arm and the BEV arm, respectively, and FN rates were 4% and 6%, respectively. Thus, this study demonstrated that BEV should not be included in postoperative adjuvant chemotherapy regimens. Nevertheless, we gained important clinical value from that trial, because it was a cisplatin-based study with patient enrollment occurring from 2007–2013, and the precautionary measures and management methods for adverse events used were similar to those of the study. Although the use of granulocyte-colony stimulating factor (G-CSF) was not reported, the incidence of adverse events is useful for comparison with those associated with S-1 plus cisplatin regimens (Table 5).

To sufficiently enhance the efficacy of chemotherapy, it is necessary to administer sufficient amounts of anticancer drugs. However, adverse events sometimes necessitate a reduction in the dosage of the drug and may require drug discontinuation. As mentioned in the Introduction, among patients with stage I–III NSCLC, it has been reported that 42% of patients are expected to receive chemotherapy at an RDI <85% of the standard dose due to dose-limiting toxicities, but 63% of patients actually received an RDI <85% (8). In the study, 53% of patients were able to receive the planned dose, and 32% of patients received an overall actual RDI <85%. Thus, S-1 plus cisplatin appears to be a highly safe adjuvant chemotherapy regimen when administered using current standard precautionary measures for adverse events.

Finally, based on the results of two previous studies (12,13) and our study, S-1 plus cisplatin is a safe regimen with a low risk of death due to treatment. However, further development of postoperative chemotherapy regimens is necessary to achieve lower adverse events and a better prognosis.

Reporting Checklist: The authors have completed the TREND reporting checklist. Available at http://dx.doi.org/10.21037/jtd-20-3293

Conflicts of Interest: All authors have completed the ICMJE uniform disclosure form (available at http://dx.doi.org/10.21037/jtd-20-3293). AI serves as an unpaid editorial board member of Journal of Thoracic Disease from May 2019 to Apr 2021. The other authors have no conflicts of interest to declare.

Ethical Statement: The authors are accountable for all aspects of the work in ensuring that questions related to the accuracy or integrity of any part of the work are appropriately investigated and resolved. The study was conducted in accordance with the Declaration of Helsinki (as revised in 2013). This study was approved by the ethics committee of Toho University Omori Medical Center (approved number: M17050) and was registered on the UMIN clinical study registration site (protocol ID: UMIN000016191) (Retrospectively registered). Written informed consent was obtained from all patients.