Non-small cell lung cancer (NSCLC) accounts for 80–90% of lung cancers and is the leading cause of cancer death in man and women worldwide (1). Approximately half of all patients diagnosed with NSCLC present metastatic disease at the time of diagnosis, with a 5-year overall survival (OS) of only about 18% (2). Immunotherapy (IO) has been used to treat patients with advanced NSCLC through enhancing the immune response to tumor, allowing good clinical outcomes (3). Expression of PD-1 ligand (PD-L1) in tumor cells is the best established biomarker for response to IO but it has been addressed the variability between expression of the PD-L1 and the clinical response to IO in patients with advanced NSCLC (4,5). Besides, there is a lack of evidence about which patients will present a durable response to IO and which will have increased risk of immune-related adverse effects (irAEs). All these facts justify the need to identify additional biomarkers of response to IO.

The eosinophil count in peripheral blood seems to be a promising prognostic marker in several cancers (6,7). However, paradoxical data has emerged regarding the role of these cells. In fact, recent studies have shown evidence that eosinophils may have both immunostimulatory and immunoinhibitory functions in tumor growth, according to the type of cancer and different stimuli in the tumor microenvironment (TME) (8,9). A high eosinophil count in peripheral blood has been related with a better prognosis in several cancers (10,11). Nevertheless, an association between eosinophils and a non-beneficial prognosis has also been described (12,13).

The aim of this study was to identify the impact of peripheral blood eosinophil count on prognosis of patients with NSCLC receiving IO. Additionally, we also evaluated if eosinophilia per se is associated with an increased risk of irAEs.

We present the following article in accordance with the STROBE reporting checklist (available at http://dx.doi.org/10.21037/jtd-20-3525).

Radiological response was evaluated 2 months after IO initiation and thereafter every 3 months. In cases of suspected tumor pseudoprogression, radiological reassessment was performed in 1–2 months.

This study was conducted in accordance with the Declaration of Helsinki (as revised in 2013) and was approved by the institutional Ethics Committee of Centro Hospitalar de Vila Nova de Gaia/Espinho. The requirement for written consent was waived because of the retrospective nature of the study.

Tumor radiological response to IO was evaluated by computed tomography according to the Response Evaluation Criteria in Solid Tumors (RECIST), version 1.1.

Adverse events were diagnosed and graded according to Common Terminology Criteria for Adverse Events (CTCAE) version 5.0. The grade recorded refers to the highest grade of irAEs that each patient developed. In all consultations, patients collected blood tests and were asked about symptoms and possible adverse events.

Descriptive statistics of the variables were expressed as absolute and relative frequencies, mean ± standard deviation (SD) (if variable with normal distribution) or median and range (if variable without normal distribution). Groups comparisons were carried out by t-test or Mann-Whitney test for continuous variables and by the Chi-square test and Fisher test for categorical variables, according to the expected frequencies. The binomial test was used to assess equality of proportions between groups. Survival analysis was estimated using Kaplan-Meier method and differences in OS and PFS were evaluated using the log-rank test. Cox proportional hazard regression model was applied to estimate hazard ratio (HR) and 95% CI. The level of significance was set to 0.05. The statistical analysis was conducted using SPSS 22.0 (IBM Corp., Armon, NY, USA).

A total of 131 patients with advanced NSCLC were included in the study. Among them, 10 patients were excluded because they were not evaluable for radiological response assessment. We didn’t exclude patients being treated with low dose of systemic corticosteroids at the IO initial prescription (≤10 mg prednisolone or equivalent). Therefore, 121 patients were included in the analysis. The demographic and clinical characteristics of these patients are shown in Table 1. The most frequent histological type was adenocarcinoma. Analysis of PD-L1 expression in tumor specimens was available in 114 (94.2%) patients and mutational status was known in 86 (71.1%) patients. Among patients who presented peripheral eosinophilia, only one had a past medical history of asthma and no patient had allergic rhinitis or skin disease. Three patients had regular follow-up by a rheumatologist because of rheumatologic disease (Raynaud’s disease under investigation, juvenile arthritis and symmetric polyarthritis suspected to be a paraneoplastic disorder). 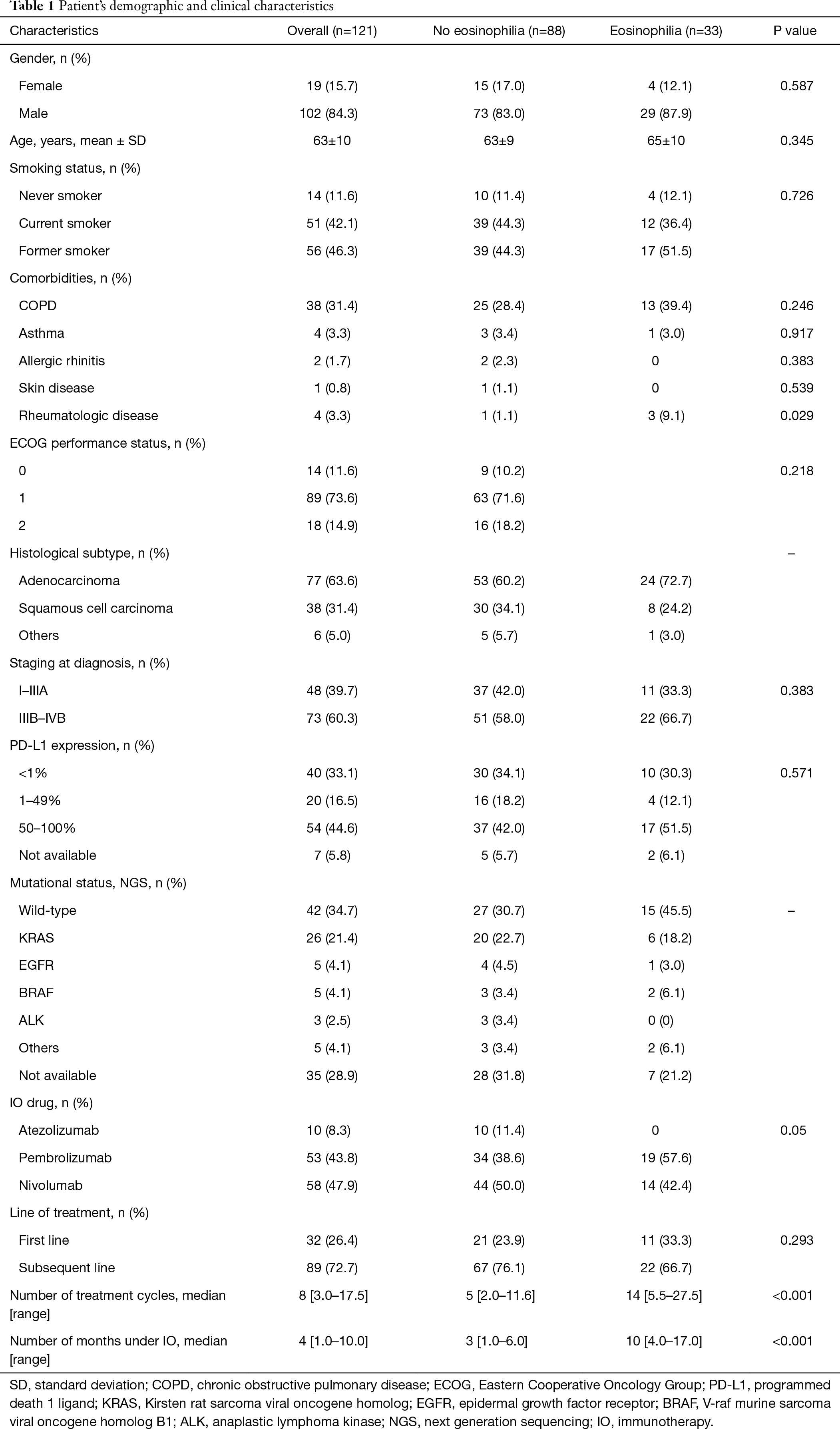 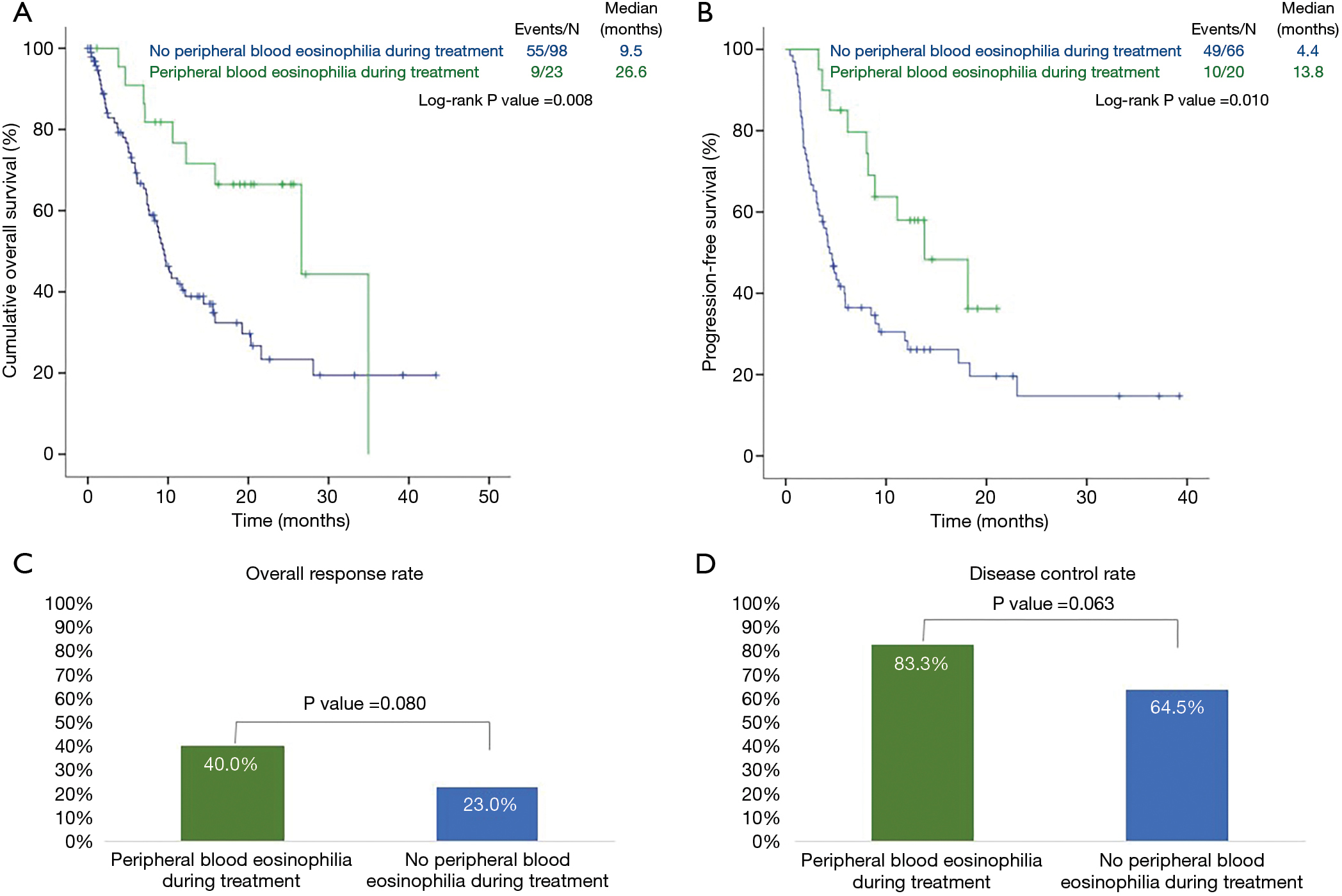 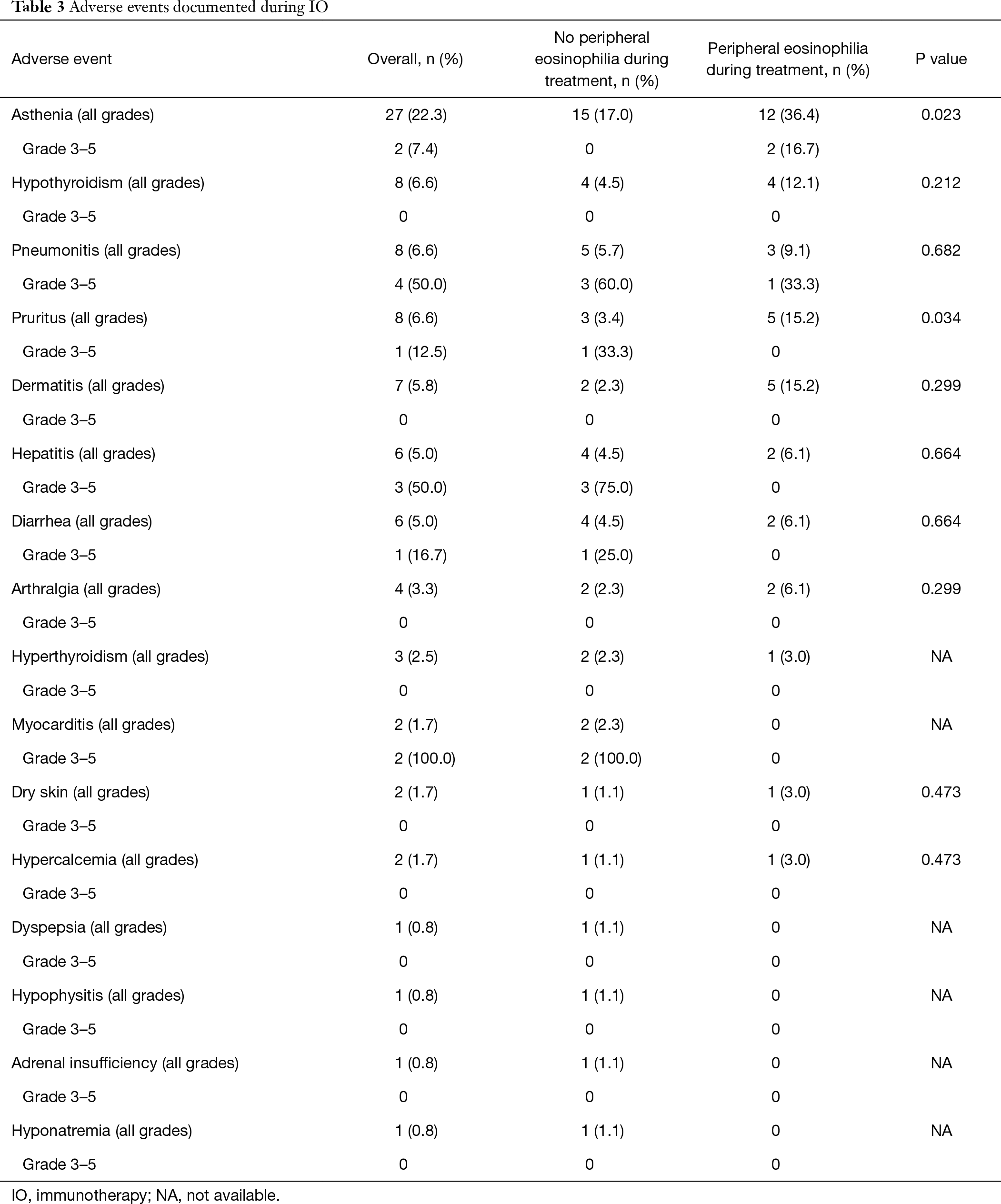 The prevalence of ECOG 2 was three times higher among patients who did not develop eosinophilia during treatment than in those who developed it (18.2% vs. 6.1%, P>0.05). The meaning of this finding is uncertain. Interestingly, these patients with no peripheral eosinophilia tended to be younger and had a lower proportion of advanced disease at diagnosis than those who experienced eosinophilia during treatment. However, patients without peripheral eosinophilia received IO more frequently in subsequent treatment lines than the other group (76.1% vs. 66.7%, P>0.05). We can speculate that the worse performance status in patients without eosinophilia may be the result of previous lines of treatment, namely with chemotherapy, which may have impaired the ability of the bone marrow to produce white blood cells, including eosinophils.

Our study reports a positive association between peripheral blood eosinophilia during IO treatment and favorable outcomes in NSCLC patients. Accordingly, we found that patients with peripheral eosinophilia were treated with IO over a longer period of time compared to those without peripheral eosinophilia, suggesting that eosinophilia may be potentially associated with more sustained and effective response to IO. Previous studies suggested that eosinophils play antitumor functions as they produce a plethora of chemokines which recruit CD8+ T cells into the TME (22). Depletion of eosinophils was associated with reduced CD8+ T cell infiltration which may weaken the effectiveness of immune response against tumor cells (23). Also, it has been described that eosinophils can exert direct cytotoxic effects against tumor cells by releasing granular content and apoptosis inducing protease granzyme B (23,24). Additionally, angiogenesis, an essential process for tumor growth, may be normalized or suppressed by eosinophils (22,25). IO has yielded good outcomes in cancer patients and peripheral blood eosinophilia has previously been associated with positive response to this treatment (5,7). In a study including metastatic melanoma patients, a positive association between the induction of eosinophilia upon IO and survival has been described and eosinophilia at some point in the course of the disease seemed to be a favorable prognostic marker, even in IO-naive patients (7). In small cell lung cancer, it has been verified a significant inverse correlation between peripheral eosinophil count and metastases, suggesting a protective role of eosinophils in the immune response against this tumor (26). In NSCLC, a high absolute eosinophil count in peripheral blood along with a high absolute lymphocyte count and a low absolute neutrophil count at treatment initiation with nivolumab was significantly associated with a better PFS and OS and may be an independent biomarker (5).

It is not clear whether the predictive role of eosinophilia also applies to patients treated with chemotherapy. In a retrospective study including patients with stage I–III breast cancer, 552 patients out of 930 received neoadjuvant and/or adjuvant chemotherapy. The authors observed that a higher relative eosinophil count (using a cut-off of 1.5%) at baseline was associated to a better prognosis, especially in patients not treated with chemotherapy or with anti-HER2 drugs (27). These results are in line with a previous study in advanced melanoma, according to which a baseline relative eosinophil count ≥1.5% reduced the risk of mortality in patients receiving IO, but had no prognostic value for patients treated with chemotherapy (28). The authors hypothesized that chemotherapy effects on bone marrow leads to a lower production and differentiation of white blood cells, reducing the number of circulating eosinophils during anticancer treatment.

Interestingly, in our study peripheral blood eosinophilia was associated with an increased risk of irAEs. We might speculate that if eosinophils may contribute to boost inflammatory response against tumor cells, these cells may at the same time be involved in the constellation of inflammatory toxicities associated with immune checkpoint inhibitors. Nevertheless, most irAEs were mild and in most cases there was no need of IO cessation. Of note, although irAEs were more common in patients with peripheral eosinophilia, these patients still had better outcomes. In fact, we found that irAEs themselves were associated with a better PFS. Previous studies reported that irAEs may be predictive of IO response in several cancers, including NSCLC. In most of these studies, the occurrence of irAEs was also associated with improvements in PFS, OS and ORR (29-31). More recently, it has been documented that a baseline feature of high peripheral blood eosinophil count (≥0.125×109 cells/L) was associated with an increased risk of immune-related pneumonitis and with an improvement in PFS (32). It is possible that the increased risk of irAEs we found in the group of patients with peripheral eosinophilia may be explained by the longer duration of IO treatment described in these patients, which would mean a longer exposure time. On the other hand, it is also questionable whether irAEs are the cause or the consequence of peripheral eosinophilia. More studies are needed to further clarify the relationship between eosinophilia and irAEs.

This study documents a link between eosinophils, response to IO and irAEs in NSCLC patients, reporting that peripheral eosinophilia may be associated with better and more sustained response to IO even though an increased risk of irAEs. However, there are some limitations to the present study. First, this is a retrospective observational study lacking a control group of patients who did not receive IO. Second, there is no consensus in literature regarding the ideal cut-off for peripheral eosinophilia, so the definition of more than 500 eosinophils/µL may not be the best peripheral eosinophils predictor cut-off value. Third, a larger sample size could potentially allow to draw more definitive conclusions.

In conclusion, this study reports a positive association between peripheral blood eosinophilia during IO and improved response to this treatment, although other factors may be involved in this association, namely the general health status of the patients and the occurrence of irAES. Further studies including a larger number of patients are needed to better understand the role of eosinophils in NSCLC patients treated with IO. Our data suggests that peripheral blood eosinophils count may be an additional, easily measured and accessible prognostic biomarker in NSCLC patients under IO. In addition to its prognostic role, eosinophils could also potentially be the specific target of future NSCLC therapies.

The authors are grateful for the statistical support provided by João Cachulo.

Reporting Checklist: The authors have completed the STROBE reporting checklist. Available at http://dx.doi.org/10.21037/jtd-20-3525

Ethical Statement: The authors are accountable for all aspects of the work in ensuring that questions related to the accuracy or integrity of any part of the work are appropriately investigated and resolved. This study was conducted in accordance with the Declaration of Helsinki (as revised in 2013) and was approved by the institutional Ethics Committee of Centro Hospitalar de Vila Nova de Gaia/Espinho. The requirement for written consent was waived because of the retrospective nature of the study.