Lung adenocarcinoma is the most common histologic type of primary lung cancer (1). According to the 2015 World Health Organization (WHO) classification of lung tumors, adenocarcinoma is classified into several subtypes (2). In the histologic classification system, the components of adenocarcinoma are classified into 5 major histopathologic categories on the basis of the growth pattern of the tumor cell: lepidic, acinar, papillary, micropapillary, and solid (3). Many studies adopting the 7th edition of the tumor node metastasis (TNM) staging system (TNM-7) reported correlations between subtypes (histopathologic components of adenocarcinoma) and disease prognosis in early-stage lung cancer (4-9). However, it is not well studied whether histologic subtypes also impact prognosis in early-stage lung cancer according to the 8th edition of the TNM staging system (TNM-8).

In TNM-8, tumor size measurement, which applies to the “T” description, has changed from TNM-7 (10-12). Previously, in TNM-7, total tumor size was measured and T-stage was determined by the maximum size of the total tumor. However, in TNM-8, T-stage is determined by the maximum size of the invasive component without the lepidic component. Therefore, since only the size of the invasive component (acinar, papillary, micropapillary, and solid components) reflects the T-stage in TNM-8, the prognostic effect of subtypes may not be the same as previously considered. We wanted to know if the effect of subtypes of adenocarcinoma on prognosis is still valid in the same stage of lung adenocarcinoma when adopting the criteria of TNM-8.

The purpose of this study was to evaluate the effects of adenocarcinoma subtypes on prognosis of stage I lung adenocarcinoma (according to TNM-8) after curative surgical treatment. Simply, we attempted to confirm whether the subtype of adenocarcinoma is still a significant prognostic factor in TNM-8, which adopted the invasive component size as the descriptor of the “T” category.

We present the following article in accordance with the STROBE reporting checklist (available at http://dx.doi.org/10.21037/jtd-20-3509).

The study was conducted in accordance with the Declaration of Helsinki (as revised in 2013). This study was approved by the institutional review board of Seoul St. Mary’s Hospital at the Catholic University of Korea and individual consent was waived (Referral number: KC19RNSI0103). From 2010 to 2017, 1,630 consecutive patients at a tertiary hospital in Korea were diagnosed with non-small cell lung cancer (NSCLC) and underwent curative resection. Of those patients, 1,196 were diagnosed with lung adenocarcinoma. In none of the patients studied was resection incomplete or was preoperative chemotherapy or radiotherapy administered. Patients who had synchronous lung cancer were excluded from the study. We retrospectively enrolled 788 patients who were judged, according to the pathologic criteria listed in TNM-8 (pTNM), to have stage I lung adenocarcinoma including adenocarcinoma in situ (AIS), minimally invasive adenocarcinoma (MIA), and 5 major subtypes (lepidic, acinar, papillary, micropapillary, and solid-predominant) (2). We compared the recurrence-free survival (RFS) and disease-specific survival (DSS) rates among predominant subtypes of adenocarcinoma. We analyzed the risk factors for recurrence in stage I lung adenocarcinoma (according to TNM-8) after curative resection.

Histological evaluation and re-staging according to TNM-8

All pathological specimens were re-examined by pathologists and their observations were recorded. Each case was reviewed for tumor size, location, lymph node status, pleural invasion, and lymphovascular invasion (LVI). To describe the histologic patterns of tumors, the occupancy ratio of each histologic component (lepidic, acinar, papillary, micropapillary, and solid) in the total tumor area was measured and recorded semi-quantitatively in 5% increments according to the 2015 WHO classification of lung tumors (2). We used the TNM staging system (pTNM) to establish the pathologic stage for each patient (13). To classify the “T” category using TNM-8, the tumor size was re-measured by the pathologist and the greatest dimension of the invasive component on pathologic study was recorded (10).

The Kaplan-Meier method was used to calculate the interval from surgery until the final follow-up visit, and the RFS and the DSS rates were calculated using confirmed recurrences and cancer-related deaths. We compared the clinicopathological characteristics of subtype groups. The student’s t-test or Wilcoxon rank-sum test was used for continuous variables and Fisher’s exact test or the χ2 test was applied for categorical variables. The RFS and DSS between both groups were compared using the log-rank test. In a multivariate analysis, the Cox proportional hazard model was used to determine the risk of recurrence for all patients. A P value less than 0.05 was considered statistically significant. Statistical analyses were performed using SPSS 24.0 software (IBM Corp., Armonk, NY, USA).

The clinicopathological characteristics of all 788 study patients are shown in Table 1. The mean age was 63.4 (±10.1) years, and there were more female (59.5%) than male patients. Sublobar resection was conducted in 206 patients (26.1%) and lobectomy (or bilobectomy) was conducted in 582 patients (73.9%). Most surgery was performed using video-assisted thoracoscopic surgery (91.0%). The postoperative complication rate was 12.8%. The postoperative mortality rate was 0.1%.

There were 49 cases of stage migration from TNM-7 to TNM-8 (Table 2). Each of the stage migrations was a down-stage of the “T” category. The changes were due to reductions in tumor size from total tumor size (including lepidic component) to invasive component size. 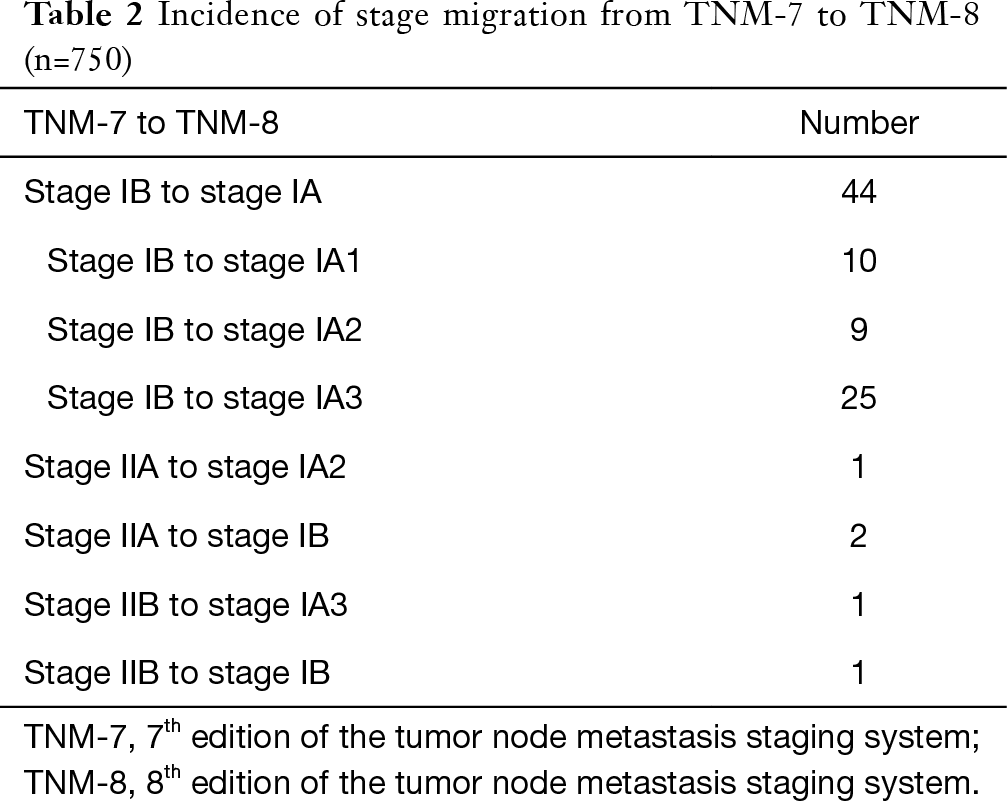 We compared the clinicopathological characteristics of the LAP group and the MS group to evaluate factors that might influence survival difference in the two groups (Table 4). In the MS group, more male patients and more former or current smokers were included; pulmonary function was poorer in the MS group. More mediastinal lymph node dissection was performed in the LAP group. In terms of pathological characteristics, the MS group had more patients with high T-stages. Total tumor size was not significantly different between the two groups, but invasive tumor size was smaller in the LAP group (1.5 vs. 2.3 cm, P<0.001). The incidences of visceral pleural invasion (VPI) and LVI were also more frequent in the MS group (P=0.008 and P=0.001, respectively). As a result, the MS group had more factors that affected poor prognosis. 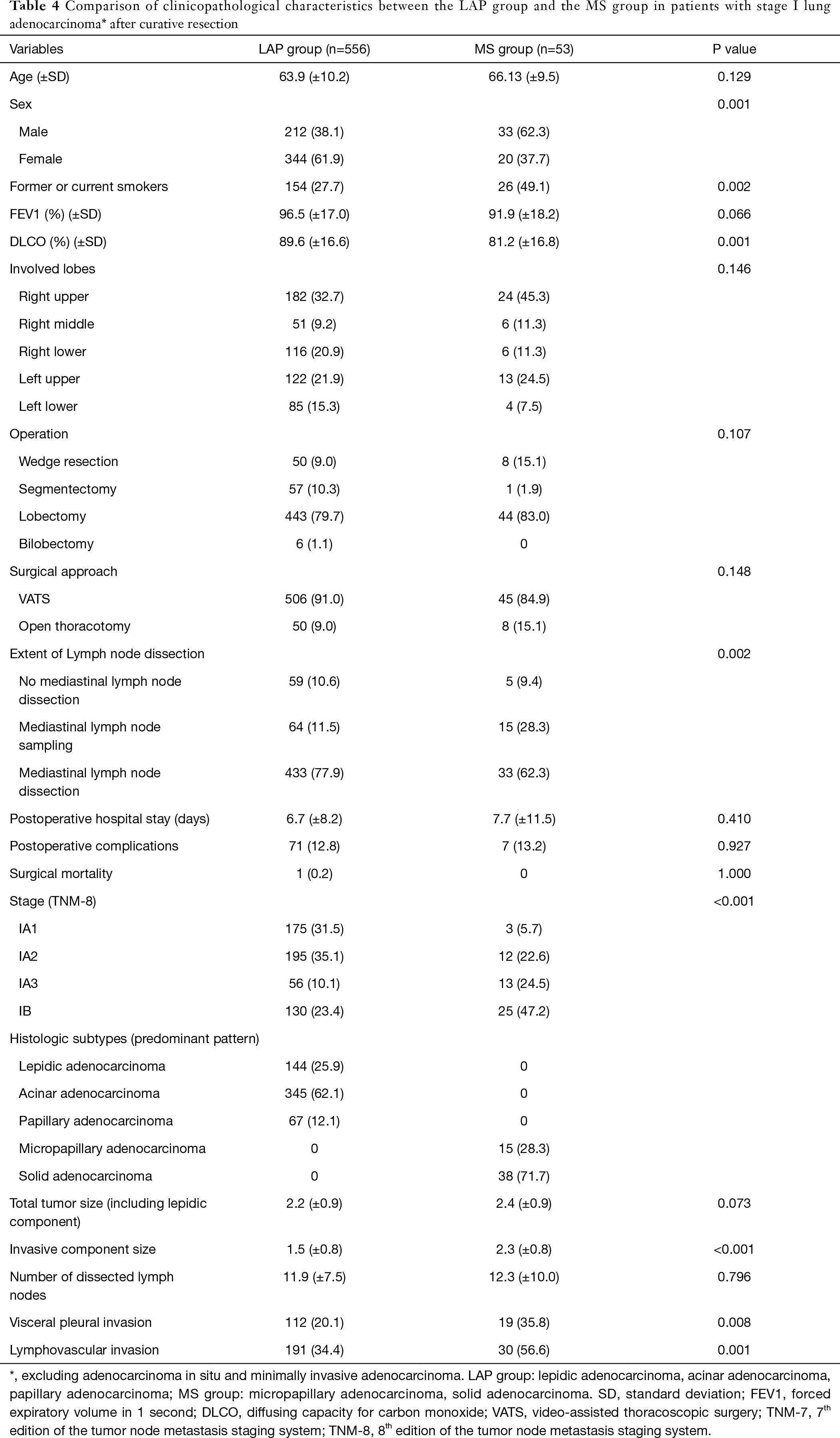 We analyzed risk factors for recurrence. In order to reduce the recurrence effect of the surgical procedure, only patients who underwent lobectomy with mediastinal lymph node dissection were included in this analysis. Thus, we attempted to determine whether the subtypes of adenocarcinoma affected the prognosis. 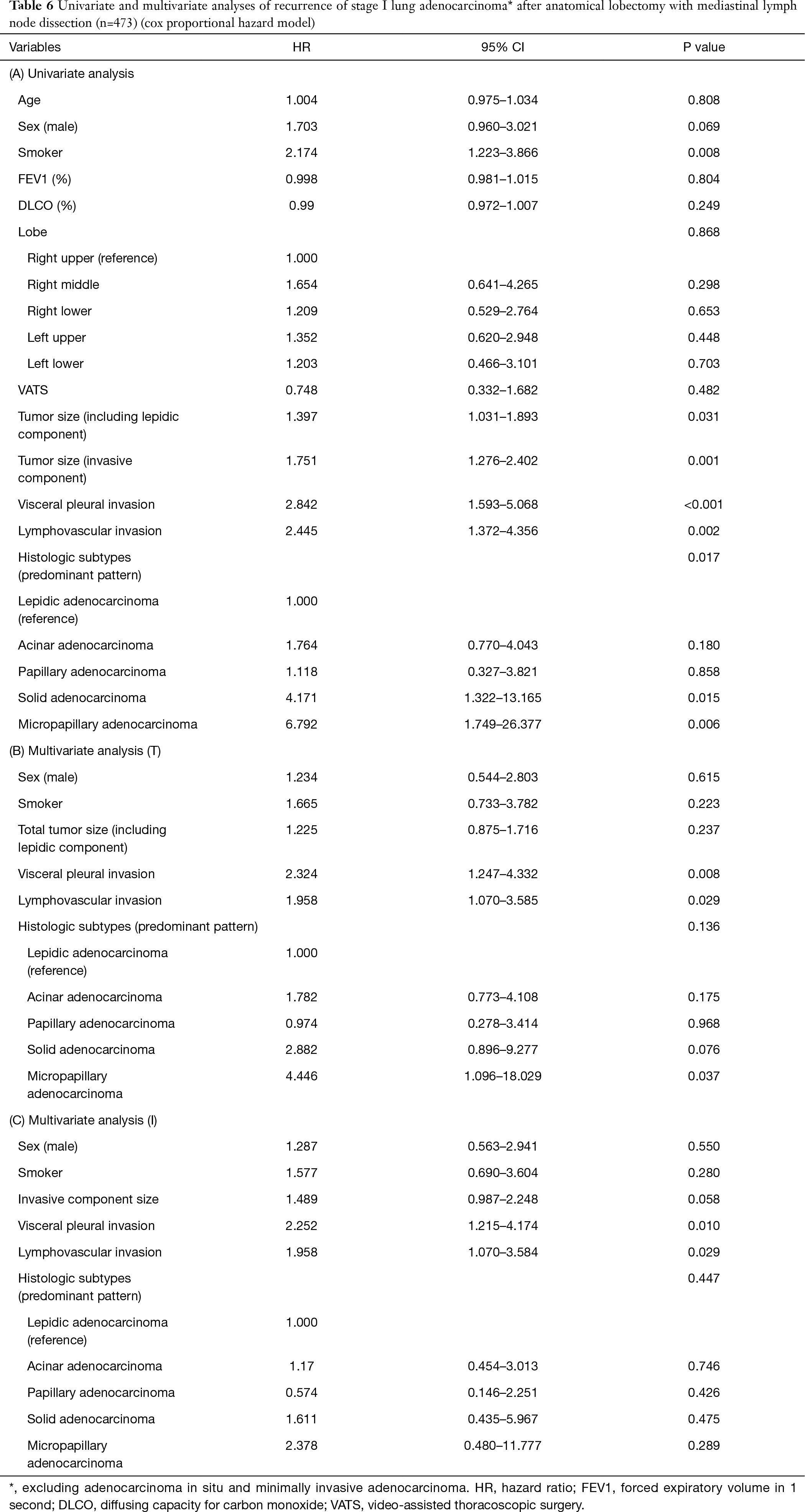 Many studies adopting TNM-7 criteria reported that adenocarcinoma subtypes were related with prognosis. In this study, survival rates differed among adenocarcinoma subtypes in stage I lung adenocarcinoma. The prognosis of lepidic-, acinar-, and papillary-predominant adenocarcinomas was better than solid- and micropapillary-predominant adenocarcinomas. The survival rate graph shows the difference in the survival rate of each subtype (Figure 1). However, in the comparison of clinicopathological characteristics, micropapillary- and solid-predominant adenocarcinoma had more characteristics that are considered poor prognostic factors. As shown in the comparison of the LAP group and the MS group (Table 4), there was no difference in total tumor size, but the invasive component size was significantly larger in the MS group. Thus, according to TNM-8, which further subdivides the T-stage according to the size of the invasive component, the frequencies of stage IA3 and stage IB were higher in the MS group. The frequencies of VPI and LVI were also higher in the MS group. As a result, the survival rate difference among the subtypes was derived from the difference in the invasive tumor size and the invasiveness of the tumor. Since TNM-8 reflects invasive tumor size, we found that the application of the current staging system might replace the significance of prognosis prediction through differences in subtypes.

Although there is currently no established histologic grading system, proposals have been made for grading according to predominant histologic patterns; lepidic-predominant as low grade, acinar- and papillary-predominant as intermediate grade and micropapillary-and solid-predominant as high grade, according to the 2015 WHO classification of lung tumors (2). Recently, difference in genomic characterization among predominant histologic subtypes of lung adenocarcinoma has been reported (21), which suggests possible explanation for prognostic difference. Also, a novel grading system has been proposed from the International Association for the Study of Lung Cancer Pathology Committee, based on RFS and overall survival, validated and tested in stage I to III (22). However, results of the current study show that when adjusted by invasive component size, the histologic patterns might not add any prognostic information to the T stage, at least in stage I lung adenocarcinoma. One of the possible explanations is that micropapillary and solid histologic patterns are relatively more infrequent in the earlier stage. For example, the percentages of micropapillary- and solid-predominant adenocarcinoma cases were 0.9% in T1a, 5.8% in T1b, 18.8% in T1c, 16.1% in T2a.

This study has several limitations. First, we used a retrospective study design. Second, the data were obtained from a single institution and the sample size was relatively small, especially in the MS group, so generalizing our result is difficult. However, the study patients were treated by a standardized surgical procedure at a tertiary hospital in Korea. Furthermore, a detailed analysis was possible because of the detailed data contained in the electronic medical records. We also used pathological specimens of all study patients for analysis. We thought that this study is the only study that has re-measured invasive component size using pathologic specimens of all study patients. We believe that our data can be used as the basis for future investigations. A larger study should be performed to validate our results.

In conclusion, predominant histologic subtypes of lung adenocarcinoma have been considered as prognosis factors, but their role as independent prognosticators may be diminished when applying measurement of invasive component size, at least in stage I according to TNM-8. These findings might be different when investigating more advanced lung adenocarcinoma, including stage II, III and IV. In TNM-8, invasive component size and VPI are included in the “T” category and those two factors are more important than histologic subtypes of adenocarcinoma, which is also consistent with the results of our study. LVI also has a potential to be reflected in staging system as a prognostic factor in early0stage lung cancer. We expect further research to validate the current findings that may help establish a new grading system or staging in the future.

Reporting Checklist: The authors have completed the STROBE reporting checklist. Available at http://dx.doi.org/10.21037/jtd-20-3509

Conflicts of Interest: All authors have completed the ICMJE uniform disclosure form (available at http://dx.doi.org/10.21037/jtd-20-3509). YM reports grants from National Research Foundation of Korea (NRF), during the conduct of the study. The other authors have no conflicts of interest to declare.

Ethical Statement: The authors are accountable for all aspects of the work in ensuring that questions related to the accuracy or integrity of any part of the work are appropriately investigated and resolved. The study was conducted in accordance with the Declaration of Helsinki (as revised in 2013). This study was approved by the institutional review board of Seoul St. Mary’s Hospital at the Catholic University of Korea and individual consent was waived (Referral number: KC19RNSI0103).

Cite this article as: Sung YE, Lee KY, Moon Y. The prognostic utility of the histologic subtype of stage I lung adenocarcinoma may be diminished when using only the invasive component to determine tumor size for tumor node metastasis (TNM) staging. J Thorac Dis 2021;13(5):2910-2922. doi: 10.21037/jtd-20-3509