MicroRNAs (miRNAs) are endogenous non-coding RNA with an average of 22 nucleotides, and exert post-transcriptive influence among animals and plants (4). The pro- and anti-cancer genes regulated by miRNAs extensively take part in metastasis and progression of NSCLC (5). Research has found that 37 miRNAs are abnormally expressed in lung cancer, and 24 of them are related to NSCLC (6,7). Nevertheless, the role and mechanism of miR-132-3p in NSCLC remain unclear.

This research aimed to elucidate the roles of miR-132-3p and KLF7 in the progression of NSCLC, in order to yield practical direction for NSCLC treatment. In this study, the authors first found that miR-132-3p can affect NSCLC proliferation by targeting KLF7 expression, invasion, migration and EMT process.

We present the following article in accordance with the MDAR reporting checklist (available at http://dx.doi.org/10.21037/jtd-21-353).

A total of 30 pairs of NSCLC and peripheral normal tissue specimens were obtained from Shanghai Tongren Hospital. Age: 31–65. Sex: (male, 19 cases; female, 11 cases). The samples were stored at −80 °C for standby. All procedures involving human participants in this study are consistent with the Helsinki Declaration (as revised in 2013). The study has got approval from Ethics Committee of Shanghai Tongren Hospital (No. 2018-067-01) and obtained the informed consent forms of all patients.

Cells were obtained 2 days after transfection. After quantifying through bicinchoninic (BCA), the total protein was set in lanes with 15 µg each. After blocking with fat-free milk, primary antibodies KLF7 (13125-1-AP, Proteintech), E-cadherin (20874-1-AP, Proteintech), vimentin (ab92547, Abcam), as well as glyceraldehyde 3-phosphate dehydrogenase (GAPDH) (60004-1-Ig, Proteintech) were incubated at 4 °C for 1 night. Then, the secondary antibodies were incubated together with the membranes.

A 100 µL quantity of cellular suspension and 200 µL of serum-free culture fluid were mixed into the Transwell upper chamber. Then, the complete culture medium with 400 µL 0.05% FBS were incubated together in the Transwell lower chamber for 2 days with 5% CO2. Cells that migrated under membrane surfaces were fixed and dried and dyed with crystal violet. The average field was chosen under microscope.

Data was described as and was analyzed by t-test between different groups. All experimental organisms were repeated 3 times. A P value <0.05 indicated a significant difference.

More miR-132-3p was expressed in NSCLC

Firstly, the expression of miR-132-3p in NSCLC was determined. The outcomes revealed its expression was elevated in 5 cell lines (Figure 1A,B). 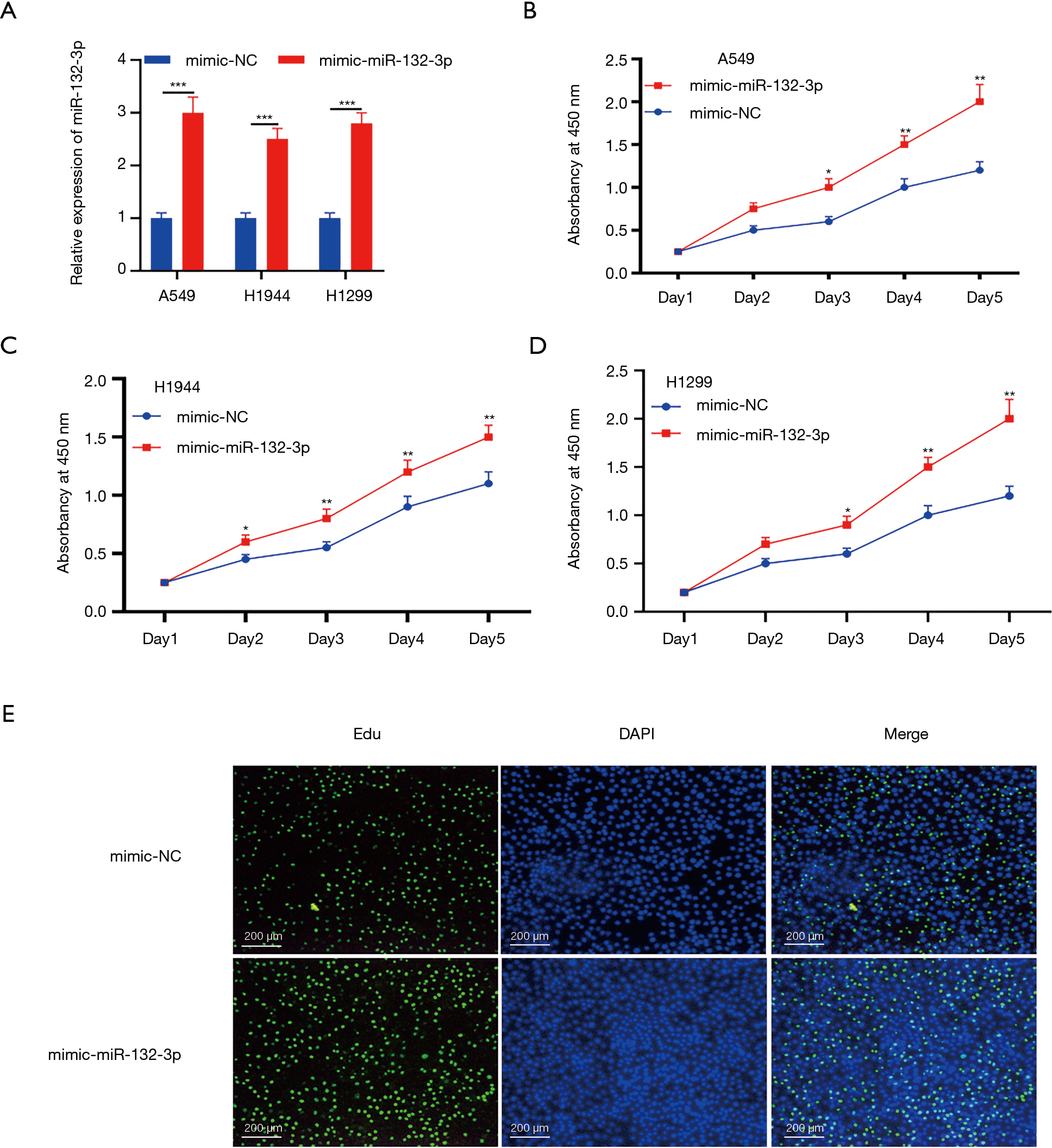 Low-expression of miR-132-3p was exhibited in its inhibitor transfection (detailed in Figure 3A). More surprisingly, the survival rate of A549, H1650, and H1299 cells lessened dramatically (Figure 3B,C,D). The EdU staining implied that the positive lung cancer cells were substantially lessened when exposed to miR-132-3p inhibitor (Figure 3E). 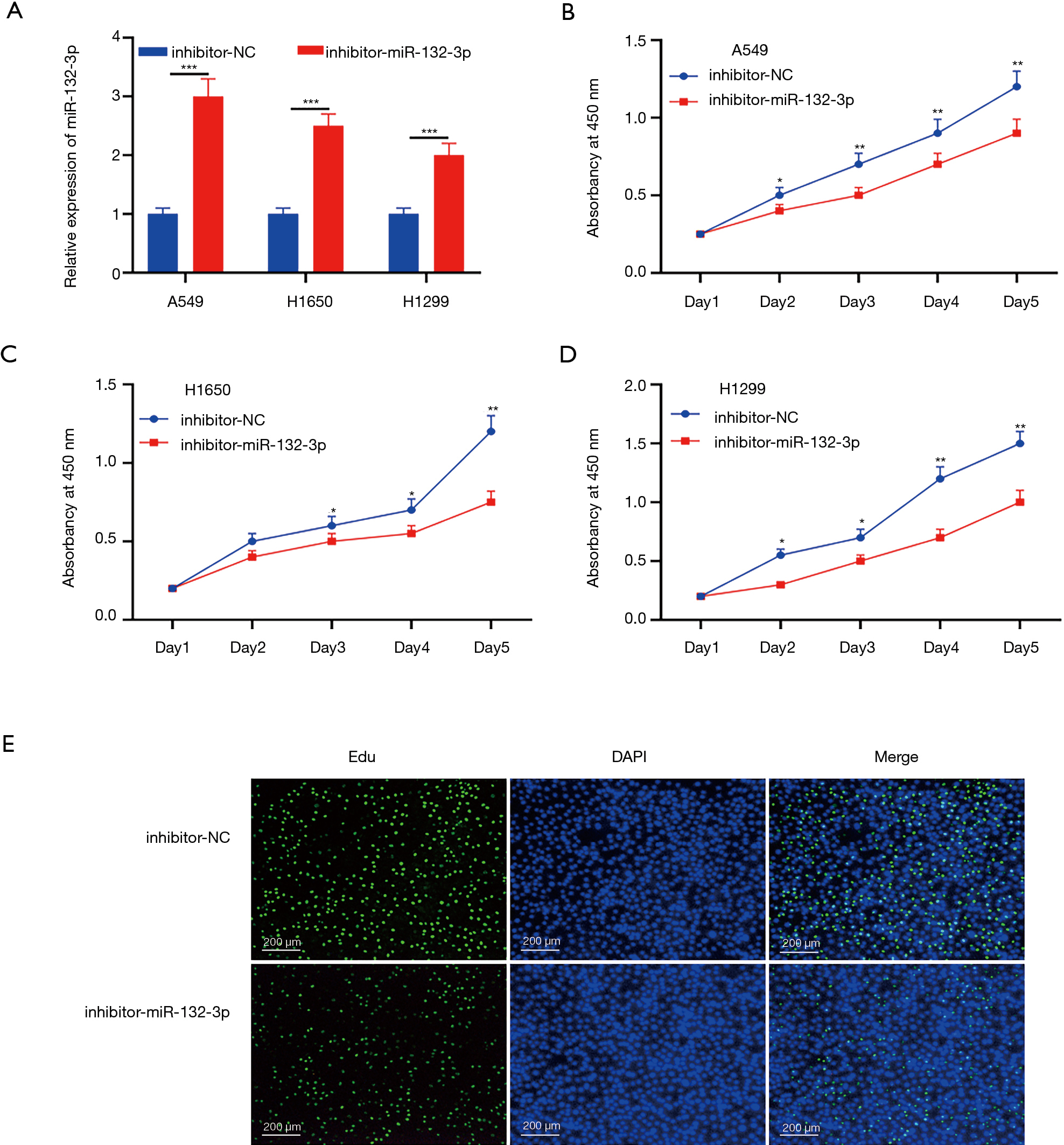 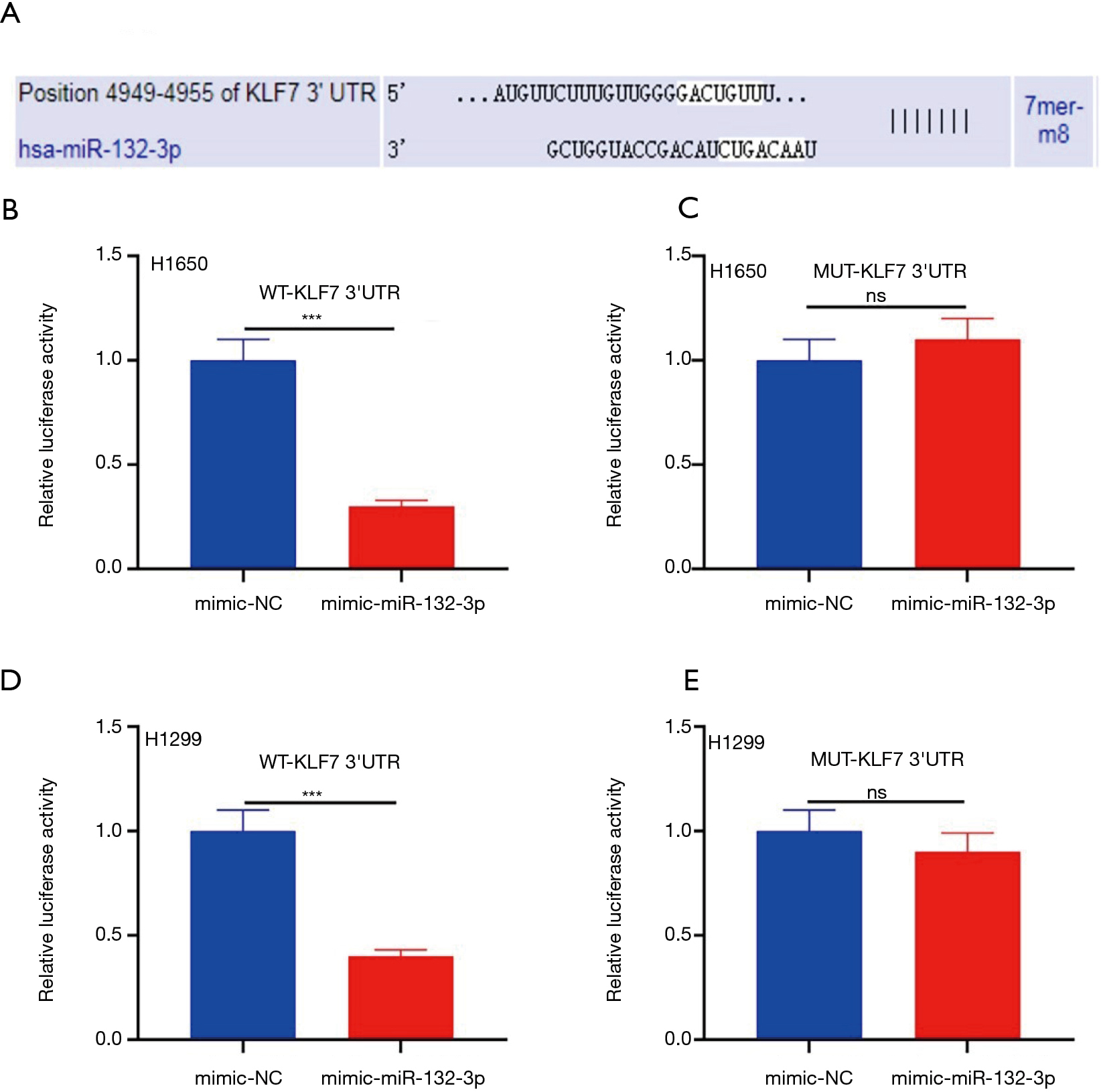 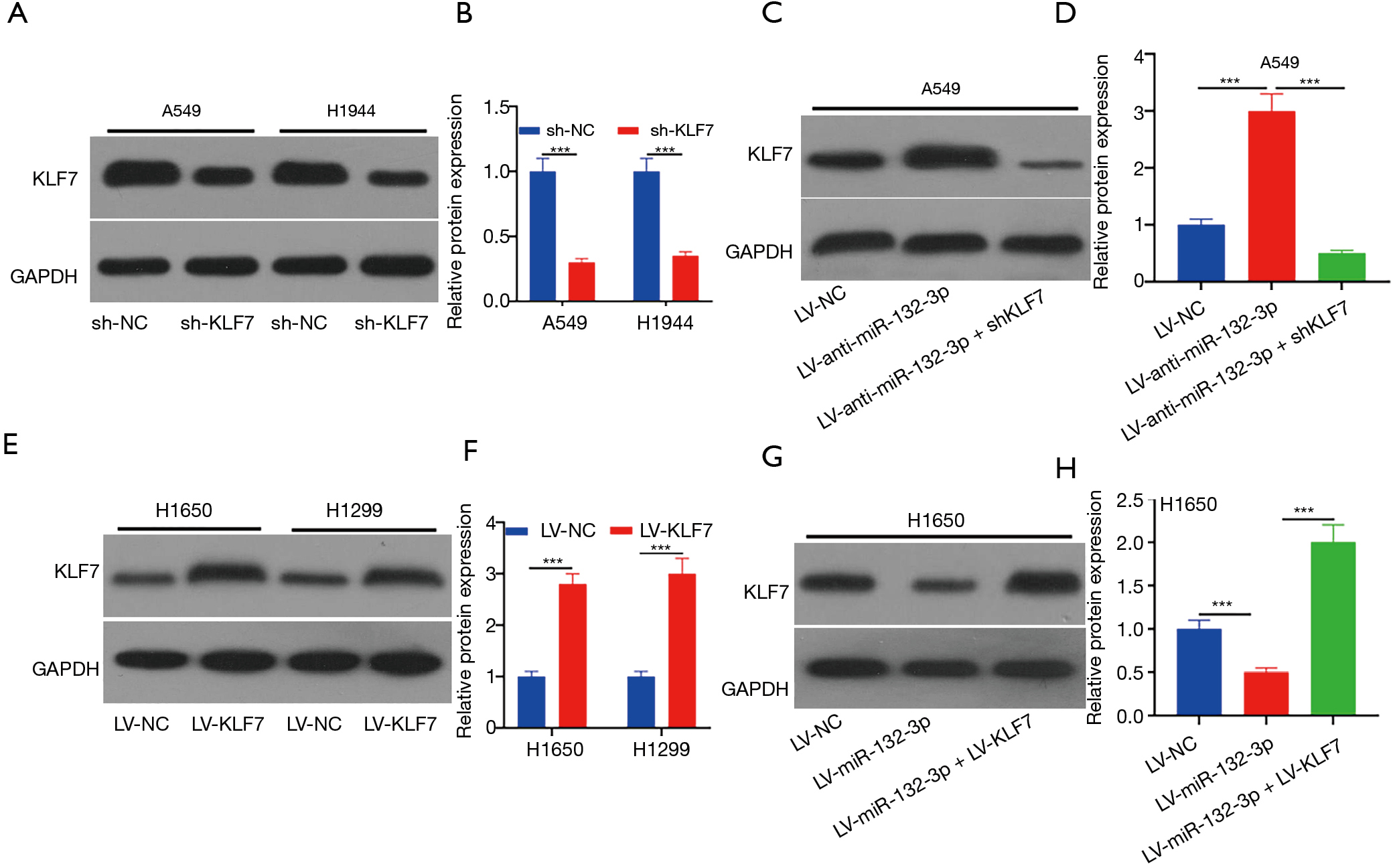 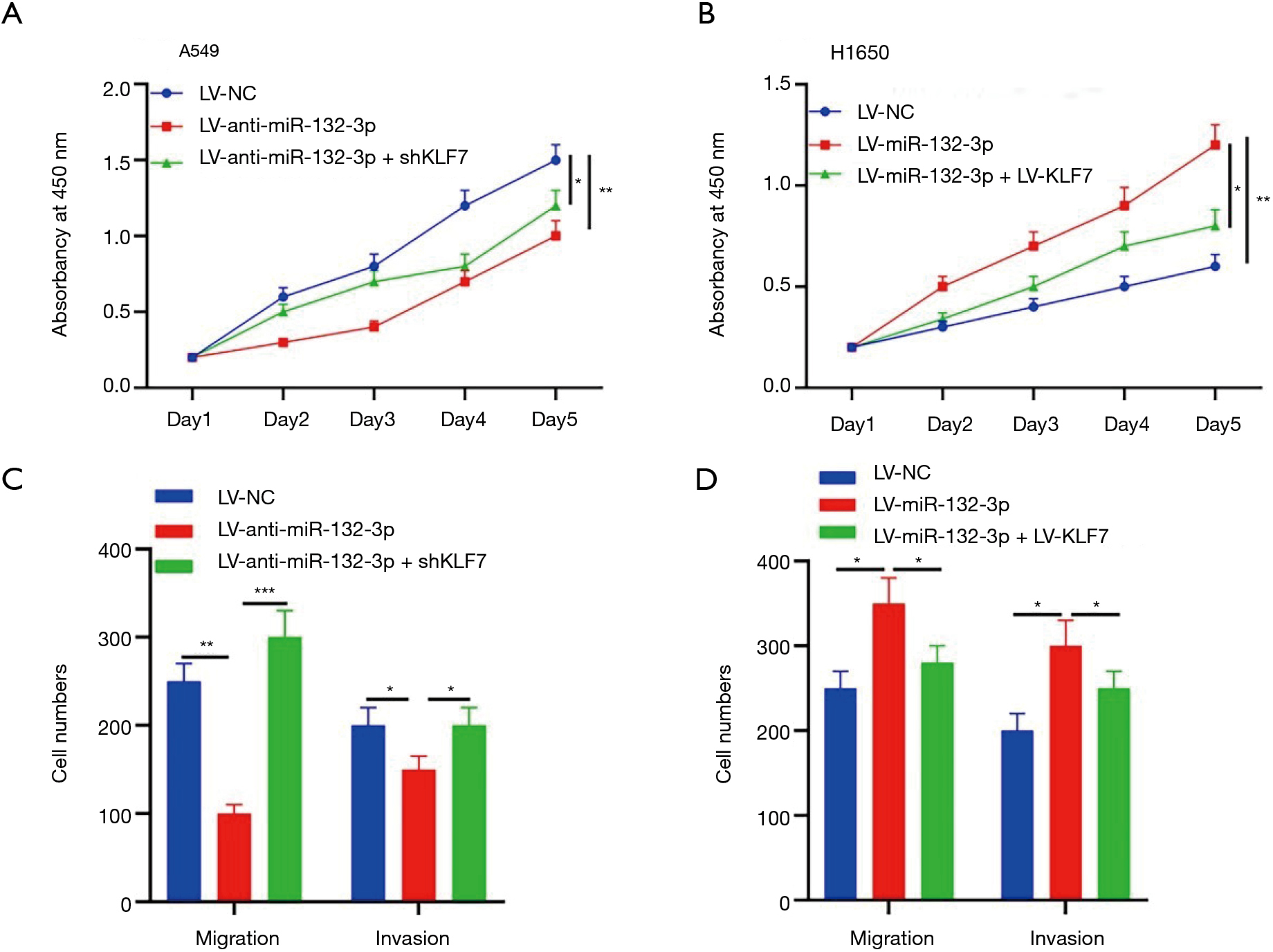 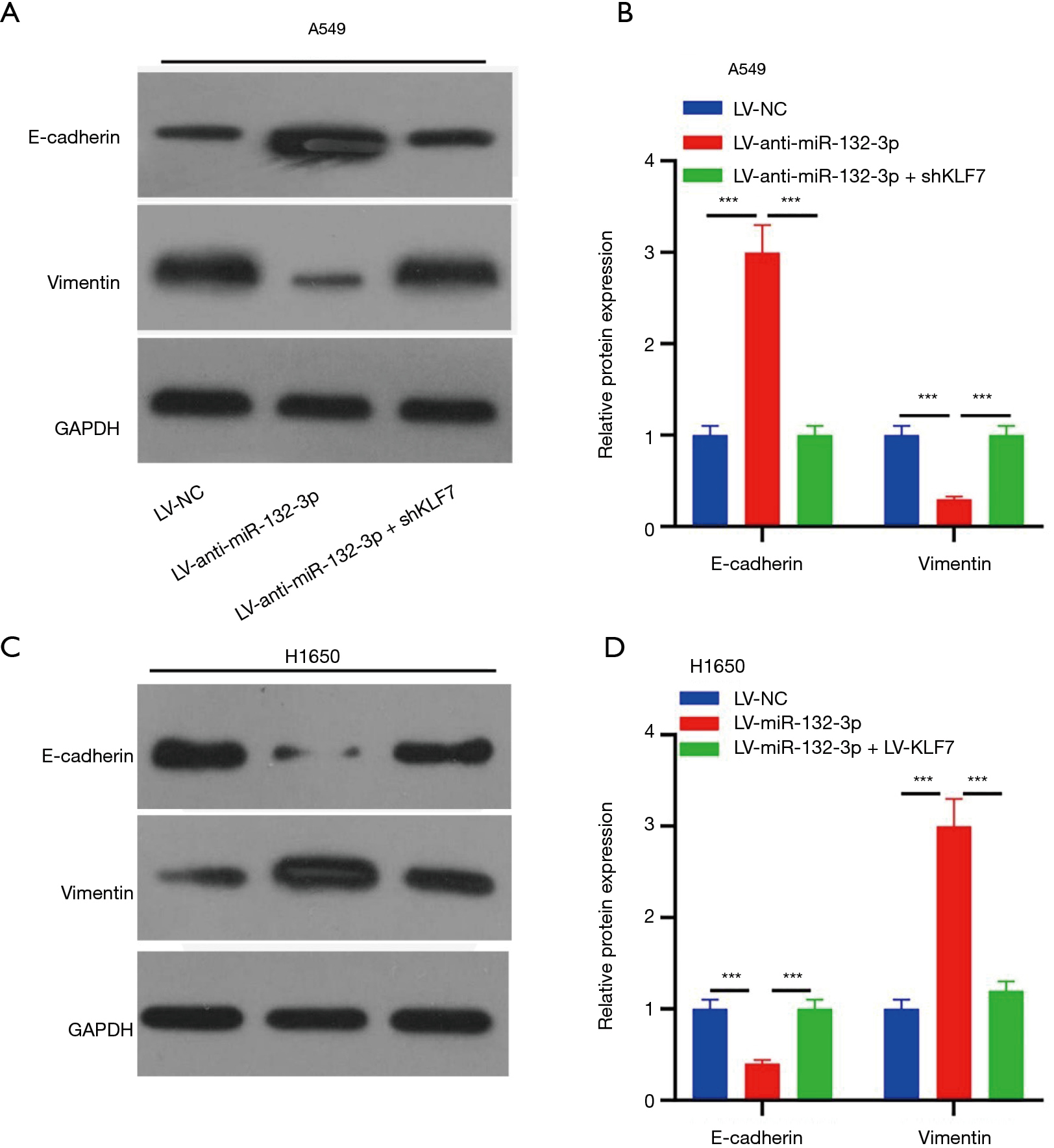 The tumor that is NSCLC is complex and malignant (8). The pathogenic factors of NSCLC include environment, diet, infection, host genes, and so on. Abnormal gene expression is the key factor of NSCLC, especially the abnormal expression of oncogenes or tumor suppressor genes (9-16). Abnormal expression of miR-132-3p has been confirmed in glioma, breast cancer, and bladder cancer (17-24). However, the role of miR-132-3p in the progression of NSCLC has remained unclear.

In this study, we discovered more miR-132-3p in tissue specimens and cells. A negative relationship was detected between KLF7 and miR-132-3p. In addition, miR-132-3p mimic facilitated the development of NSCLC tumor. Nevertheless, the inhibitor of miR-132-3p exhibited a contrasting result. The above-mentioned results hinted that miR-132-3p performed an oncogenic role, while KLF7 exerted an anti-oncogenic role in NSCLC.

EMT was accompanied by changes in tumor cytomorphology, adhesion between cells and between cells and stroma lost, but the invasion and migration existed, which promoted tumor metastasis in the body (25). Numerous studies have shown that the differentiated miRNA expression in tumors is highly related to the occurrence of tumor EMT (26,27). Our research investigated E-cadherin and vimentin, the markers of EMT, to explore any possible latent mechanisms. It has been shown that miR-132-3p controls EMT and inactivates the PI3K/Akt pathway in NSCLC. In addition, Li et al. have found that regulating KLF7 can inhibit NSCLC invasion, migration, and EMT (28). In the current study, miR-132-3p/KLF7 was shown to be involved in the progression of NSCLC via adjusting relevant EMT expression.

Reporting Checklist: The authors have completed the MDAR reporting checklist. Available at http://dx.doi.org/10.21037/jtd-21-353

Conflicts of Interest: All authors have completed the ICMJE uniform disclosure form (available at http://dx.doi.org/10.21037/jtd-21-353). The authors have no conflicts of interest to declare.

Ethical Statement: The authors are accountable for all aspects of the work in ensuring that questions related to the accuracy or integrity of any part of the work are appropriately investigated and resolved. All procedures involving human participants in this study are consistent with the Helsinki Declaration (as revised in 2013). The study has got approval from Ethics Committee of Shanghai Tongren Hospital (No. 2018-067-01) and obtained the informed consent forms of all patients.