Myocardial infarction (MI), caused by temporary or permanent blockage of major coronary arteries, has a high global morbidity and mortality all over the world (1,2). Previous studies have suggested that MI manifests as chest pain, fatigue, sweating, and dyspnea amongst other symptoms, and eventually, the contractility of the myocardium is reduced, leading to heart failure (3,4). Previous studies have shown that thrombolytic drug reperfusion therapy can effectively restore blood supply, but may also result in secondary myocardial injury and limiting the therapeutic effect (5). Therefore, it is urgent to develop more effective therapeutic drugs to decrease the burden of MI.

Various studies have demonstrated that circular RNAs (circRNAs) are associated with the physiological and pathological processes of various diseases, including gastric cancer (6), gallbladder cancer (7), and breast cancer (8). Zhang et al. revealed that the circRNA circNRIP1 promoted gastric cancer development by targeting microRNA-149-5p through the AKT1/mTOR pathway (6). Moreover, Li et al. highlighted the roles of circRNAs in breast cancer (8). Recent studies have also reported that circRNA molecules are rich in microRNA (miRNA) binding sites, which can regulate gene expression by acting as miRNA sponges (9,10). In recent years, the role of circRNA in MI has received more and more attention (11,12). For example, circular RNA CircFndc3b has been reported to modulate cardiac repair after myocardial infarction via FUS/VEGF-A axis (13). Circ-Ttc3 has been confirmed to play the cardioprotective role in MI (14). Besides, circRNA CDYL could induce myocardial regeneration by ceRNA after MI (15). CircRNA 010567, a newly identified circRNA, has been shown to promote myocardial fibrosis through suppression of miR-141 by targeting TGF-beta1 (16). It has also been reported that circRNA 010567 improved MI in rats by inhibiting TGF-beta1 (17). However, the underlying mechanism of circRNA 010567 in the development of MI has not yet been elucidated.

MiRNAs are a kind of endogenous noncoding RNAs found in eukaryotes, with regulatory functions (18). Studies have shown that miRNAs play important roles in cell growth and apoptosis, cell differentiation, insulin secretion, brain morphogenesis, and cardiovascular health and disease, including MI (19). For example, miRNA-145 inhibited MI-treated apoptosis by autophagy via AKT3/mTOR signaling pathway in vitro and in vivo (20). Furthermore, miRNA-141 can regulate BMP-2-mediated calcification in aortic stenosis (21). Nevertheless, whether and how miRNA-141 is involved in the progression of MI has not yet been fully explored.

Death-associated protein kinase 1 (DAPK1), a Ca2+/calmodulin (CaM)-dependent serine/threonine protein kinase, is reported to be involved in different apoptosis pathways, including tumor suppression and neuronal cell death (22-24). Study has reported that disruption of DAPK1 related cell death pathway may be considered as a promising treatment for stroke (25). Another study indicated that DAPK1 is involved in the protective effect of miR-98-5p in cerebral ischemia/reperfusion injury (26). Through the analysis of bioinformatics software, we found that there is a potential binding site between miR-141 and DAPK1. Therefore, we hypothesized that miR-141 might regulate hypoxia-induced cardiomyocyte apoptosis by regulating the expression of DAPK1.

We present the following article in accordance with the MDAR reporting checklist (available at http://dx.doi.org/10.21037/jtd-21-212).

Bioinformatics software (StarBase: http://starbase.sysu.edu.cn/, TargetScan: http://www.targetscan.org/vert_72/) was applied to identify the relationship between circRNA 010567 and miR-141, or miR-141 and DAPK1. Taking circRNA 010567 and miR-141 as an example, The 3'UTR of miR-141, which contains the circRNA 010567 binding site or mutated target site were amplified by RT-PCR and cloned into pMIR vectors (Ambion, USA) to construct the reporter vector circRNA 010567 wild-type (circRNA 010567-WT) or circRNA 010567 mutated-type (circRNA 010567-MUT) Our data revealed that DAPK1 was the potential target of miR-141. MiR-141-WT or miR-141-MUT and DAPK1 mimics or negative control (NC) were co-transfected into HEK293 cells by Lipofectamine 2000 (Life Technologies Corporation, Carlsbad, California, USA) and incubated for 48 h. Then, the relative luciferase activity was detected using the Dual-Luciferase® Reporter Assay System (Promega, Madison, WI, USA) referring to the manufacturer’s instructions.

The RIP assay is a powerful tool to study the binding of RNA to proteins in cells, and to understand the dynamic processes of post-transcriptional regulatory networks. In brief, H9c2 cells transfected with the circRNA 010567 mimics and circRNA 010567-NC were lysed using RIP buffer. Magnetic beads were incubated with anti-ago2 or IgG antibody, and then co-incubated with cell lysate referring to the manufacturer’s protocol. Antibodies for RIP assays against anti-Ago2 and IgG were obtained from Abcam (Cambridge, MA, USA).

After treatment, H9c2 cells were seeded into 96-well plates and incubated for 24 h at 37 °C. After that, H9c2 cells were induced by 20 µL MTT (5 mg/mL) solution and incubated for a further 4 h. After incubation, we removed the solution, added 100 µL DMSO to each well and kept the plate in the dark for 15 min. Finally, the optical density (OD) at the wavelength of 570 nm was determined by a multifunctional plate reader (BioTek, Richmond, Florida, USA) in accordance with the manufacturer’s protocol.

Caspase-3 activity in H9c2 cells was assessed using the Caspase-3 Assay Kit (Abcam, China) referring to the manufacturer’s direction. Briefly, H9c2 cells were lysed with buffer solution. Cell supernatants were obtained and centrifuged for 10 min at 1,500 ×g. The supernatants were then treated with the caspase-3 reagent and incubated at 37 °C for 2 h. After treatment, a microplate reader was used to measure the OD of caspase-3 activity at 405 nm.

Total proteins from H9c2 cells were quantified using the BCA Protein Assay Kit (Invitrogen, CA, USA), separated by 10% SDS-PAGE and transferred to PVDF membranes (BioRad, USA). The membranes were blocked, then treated with primary antibodies against GAPDH (Cat no. G5262-1VL; Sigma) and DAPK1 (Cat no. SAB2109107; Sigma) overnight at 4 °C. After that, the membranes were incubated in secondary antibody (Cat no. 7074; Cell signaling technology), and bands were analyzed using the ECL detection system (Millipore, MA, USA) referring to the manufacturer’s direction. 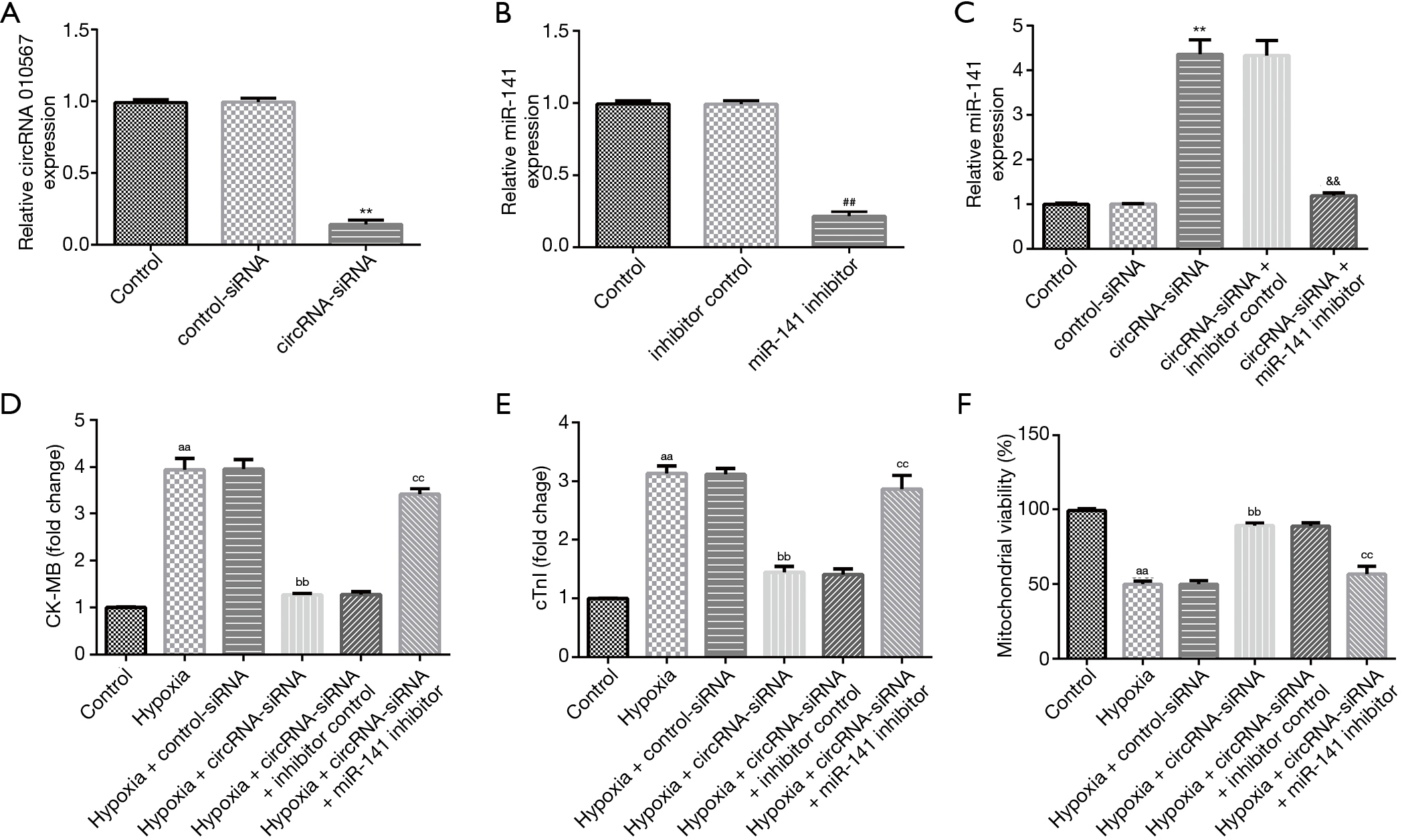 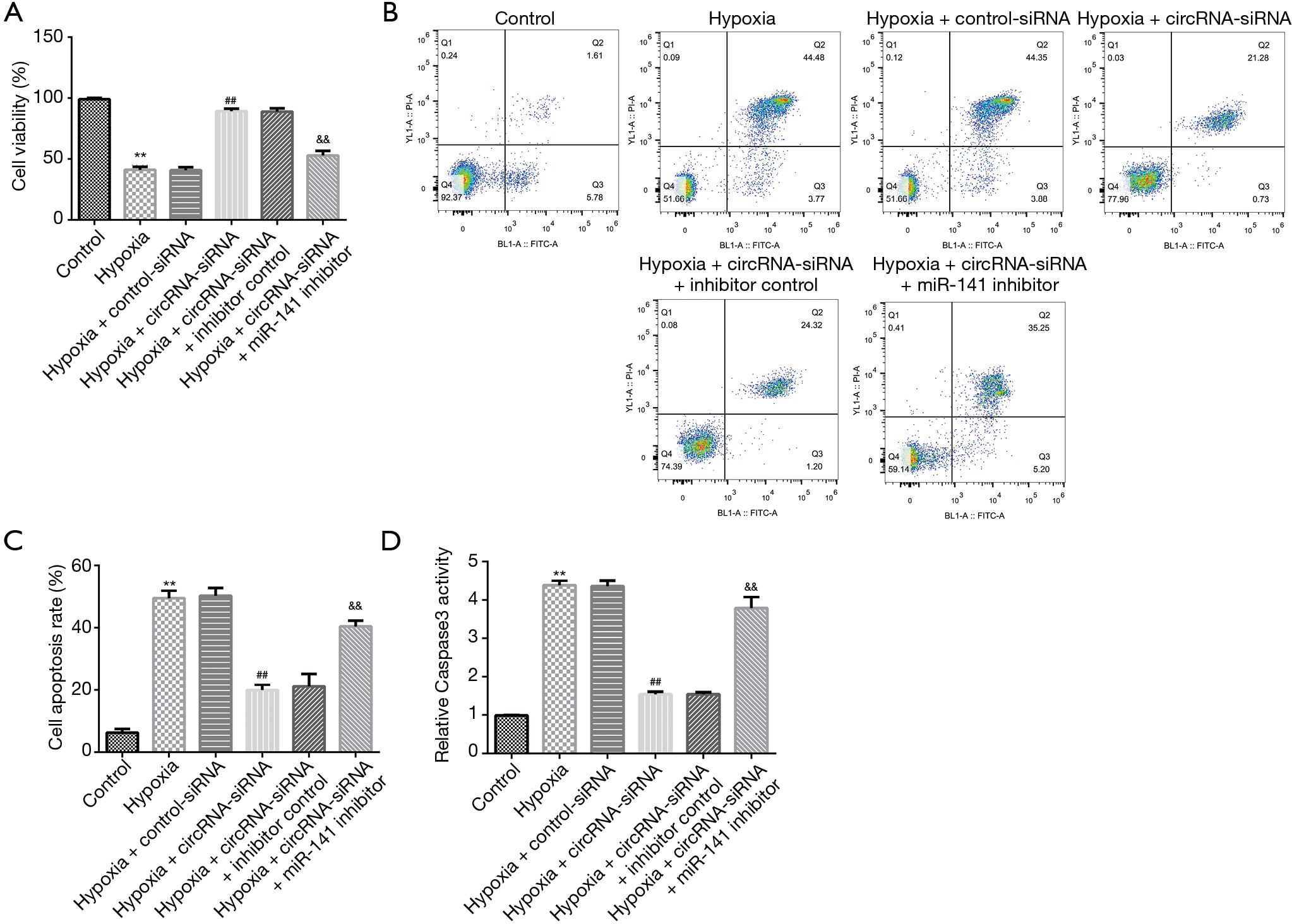 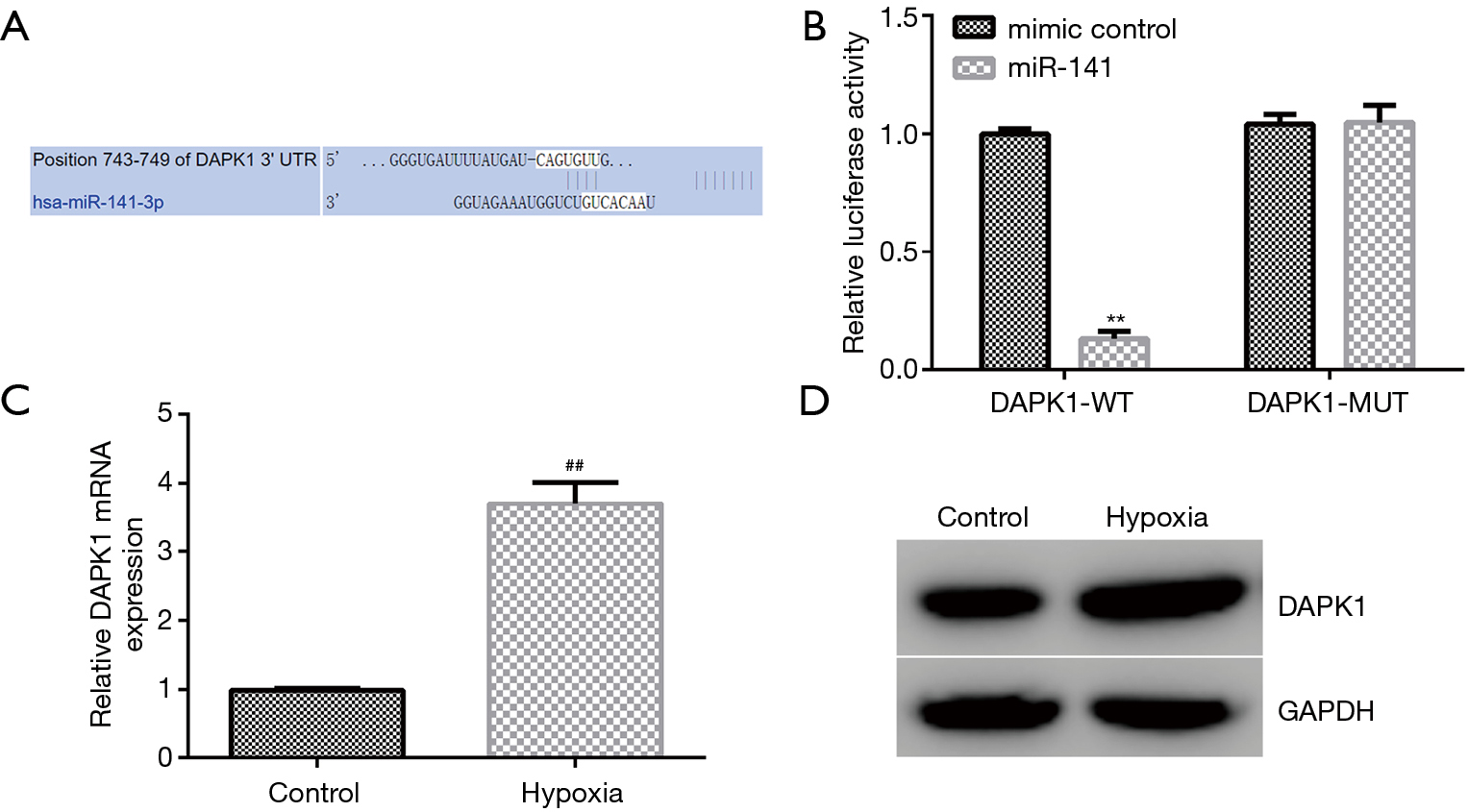 To demonstrate the relative roles of DAPK1 and miR-141 in hypoxia-induced cardiomyocyte injury, DAPK1-plasmid, control-plasmid, miR-141 mimic, or mimic control were transfected into cardiomyocytes for 48 h under hypoxic conditions. qRT-RCR and western blot were performed to evaluate cell transfection efficiency. Our data indicated that the miR-141 mimic markedly enhanced miR-141 expression in hypoxia-induced cardiomyocytes compared to the mimic control group (Figure 5A). Additionally, DAPK1-plasmid significantly promoted DAPK1 mRNA expression in cardiomyocytes compared to the control-plasmid group (Figure 5B). As displayed in Figure 5C and 5D, the miR-141 mimic significantly decreased DAPK1 mRNA and protein expression, while these results were abolished by DAPK1-plasmid. 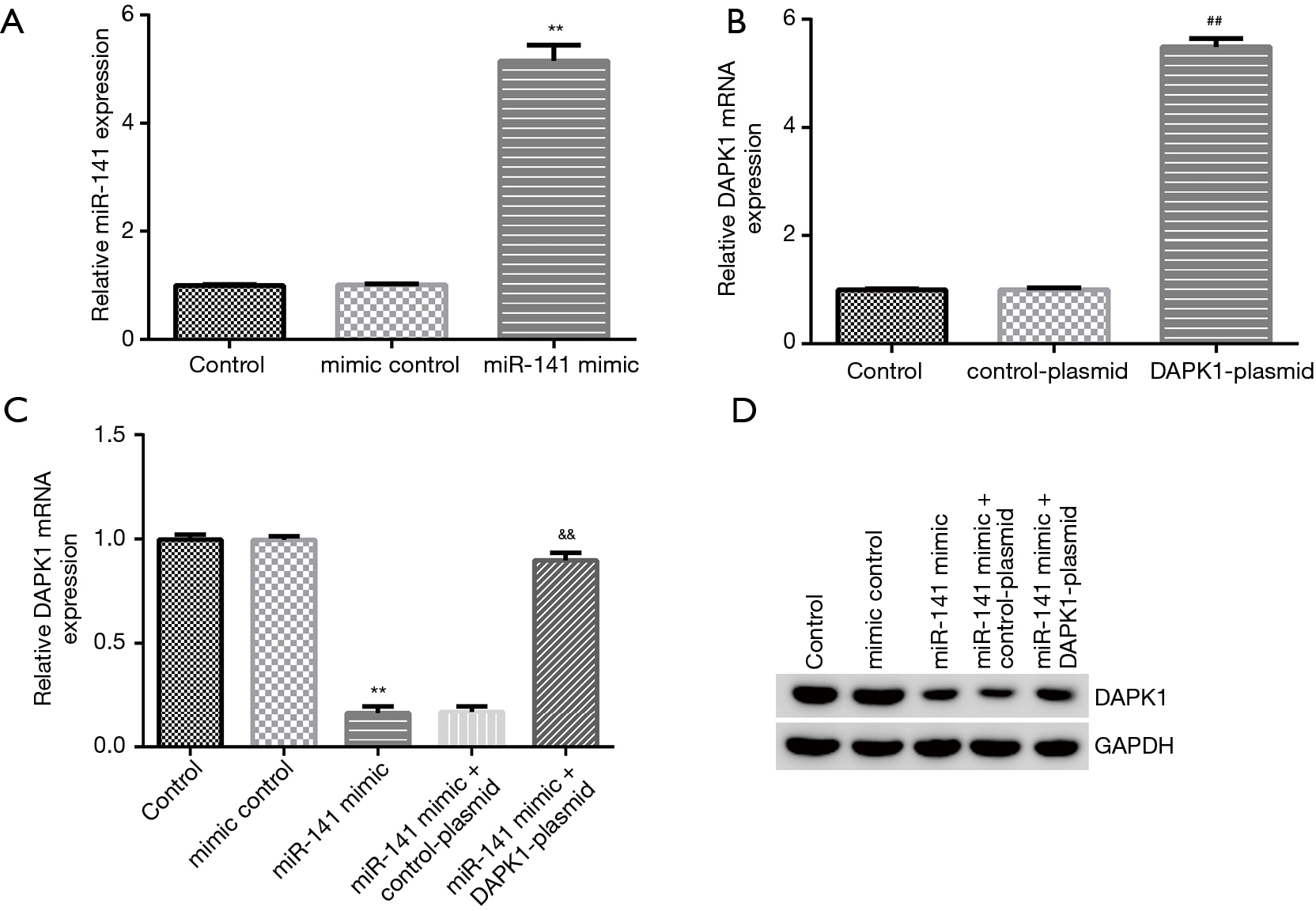 Figure 6 DAPK1-plasmid reversed the roles of miR-141 in hypoxia-induced cardiomyocyte injury. MiR-141 mimic, mimic control, control-plasmid, or DAPK1-plasmid were transfected into hypoxia-induced H9c2 cells for 48 h. The secretion of (A) CK-MB and (B) cTnI in hypoxia-induced cardiomyocytes was determined. (C) Mitochondrial activity was evaluated in different groups. Results were presented as mean ± SD. **, P<0.01 vs. hypoxia + mimic control; ##, P<0.01 vs. hypoxia + miR-141 mimic + control-plasmid.

To lucubrate the responses of H9c2 cells co-regulated by miR-141 and DAPK1, we checked the effects of the miR-141 mimic and DAPK1-plasmid on cell proliferation and apoptosis using MTT and flow cytometry. As displayed in Figure 7A, compared to control group, the miR-141 mimic signally enhanced H9c2 cell viability (Figure 7A), reduced apoptosis (Figure 7B,C), and decreased caspase-3 activity (Figure 7D). However, these effects were reversed in the hypoxia + miR-141 mimic + DAPK1-plasmid group. In summary, our study revealed that circRNA 010567-siRNA played a protective role in hypoxia-treated myocardial cell damage through regulating the miR-141/DAPK1 axis. 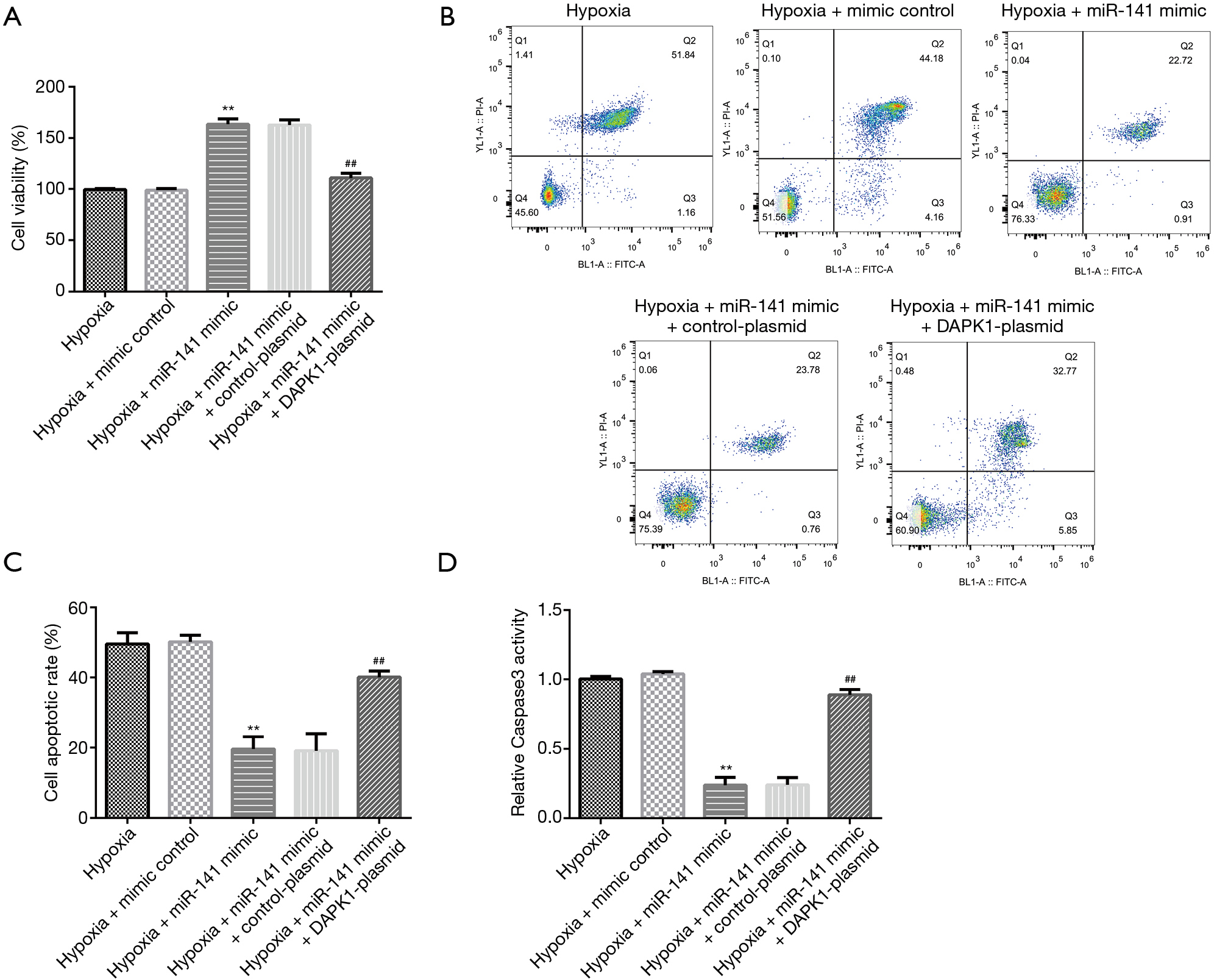 MI, defined as myocardial cell death caused by coronary artery occlusion, is the major cause of death and disability all over the world (28). Previous studies have revealed that MI decreases blood supply to the left ventricular myocardium, leading to the formation of fibrous scar tissues and remodeling of ventricular tissues (29,30). Hypoxia, a state of oxygen deficiency, is one of the main risks of MI (31). Under hypoxia, energy metabolism changes from mitochondrial respiration to anaerobic glycolysis, which causes a large number of physiological and pathological responses, leading to acidosis and cell necrosis. Therefore, it is considered that protecting myocardial cells from hypoxia is a promising strategy for MI treatment (32). H9c2 is a commercial myogenic cell line derived from embryonic rat ventricles. H9c2 cells displayed almost the same hypertrophic responses as primary cardiomyocytes and showed various characteristics of skeletal muscles (33). Therefore, H9c2 cells are commonly used for in vitro models. In this report, H9c2 cells were induced by hypoxia for 48 h.

CircRNAs, characterized by covalent 3’ and 5’ termini, are stable transcripts from different genomic locations (34). CircRNAs are abundant in the transcriptome of eukaryotes, and diverse genomic regions can produce different types of RNA loops, suggesting that circRNAs may play a crucial role in cellular processes (35). Recently, several reports have suggested that circRNAs are involved in many diseases, especially cardiovascular diseases. For example, Zhou et al. confirmed that circRNAs may be novel biomarkers for cardiovascular diseases (36). Previous reports have also confirmed that inhibition of circRNA 010567 inhibits myocardial fibrosis and improves MI infarction in rats (17). Unfortunately, up to now, the specific roles and mechanisms of circRNA 010567 in MI have not been fully elucidated.

In this study, we detected circRNA 010567 expression in hypoxia-induced H9c2 cardiomyocytes. We found that circRNA 010567 was memorably increased in hypoxia-treated H9c2 cells, compared to the control group. Increasing evidence has revealed the relationship between circRNAs and miRNAs, and their key roles in tumorigenesis (37,38). Our study demonstrated the circRNA-miRNA relationship using the dual-luciferase reporter gene system and the RIP assay. Our data revealed that there is a binding site between miR-141 and circRNA 010567. MiR-141, belongs to miR-200 family, is implicated in many cancers, while its function in MI has not yet been clarified (39). Up-regulation of miR-141 has been evidenced to suppress the invasion and migration of hepatocellular carcinoma and pancreatic cancer cells (40,41). In this report, we observed that the level of miR-141 was lower in hypoxia-induced H9c2 cardiomyocytes than that in control group. Our data indicated that circRNA 010567 was involved in MI by regulating miR-141.

Furthermore, we illustrated the molecular mechanisms of miR-141 in hypoxia-induced cell damage in cardiomyocytes. TargetScan and the dual-luciferase reporter gene system suggested that DAPK1 directly interacted with miR-141. DAPK1, a positive mediator of apoptosis, was used as a tumor suppressor because of its ability to sensitize cells, including death receptors, cytokines, and oncogene-induced proliferation involved in tumorigenesis (44,45). To further explore the functional mechanisms of miR-141 in H9c2 cells, we explored the roles of miR-141 on hypoxia-induced cardiomyocyte damage. MiR-141 mimic, mimic control, control-plasmid, or DAPK1-plasmid were transfected into H9c2 cells for 48 h, and qRT-PCR analysis revealed that the miR-141 mimic markedly enhanced miR-141 expression and suppressed DAPK1 levels. Furthermore, this effect was abolished by the DAPK1-plasmid. Functional analysis demonstrated that the miR-141 mimic significantly inhibited the release of CK-MB and cTnI, and enhanced mitochondrial activity in hypoxia-induced H9c2 cells. Additionally, the miR-141 mimic significantly improved H9c2 cell viability, reduced cell apoptosis, and decreased caspase-3 activity in hypoxia-induced H9c2 cells. However, all these effects were reversed by the DAPK1-plasmid.

Reporting Checklist: The authors have completed the MDAR reporting checklist. Available at http://dx.doi.org/10.21037/jtd-21-212

Conflicts of Interest: All authors have completed the ICMJE uniform disclosure form (available at http://dx.doi.org/10.21037/jtd-21-212). The authors have no conflicts of interest to declare.