Lung cancer is the leading cause of cancer-related mortality throughout the world. According to Global Cancer Statistics 2018, lung cancer is the most commonly diagnosed caner (11.6% of all cancer cases) and the leading cause of cancer death (18.4% of all cancer deaths) (1). Non-small cell lung cancer (NSCLC) accounts for 85% of all lung cancer, with small cell lung cancer (SCLC) accounting for the remaining 15% (2). Clinically, approximately 80–90% of patients die as a consequence of local invasion and metastasis. Brain metastases represent a common complication in lung cancer patients, occurring in 30–40% of NSCLC and a significantly higher proportion of SCLC (3). Some NSCLC patients with brain metastases suffer from severe neurological impairment and experience a poor quality of life. The median survival time (MST) in this setting is approximately 1–3 months (4).

Many studies have proven that clinical factors such as histology, stage, and age are rated to increased risk for developing brain metastasis in NSCLC patients (5-9). Waqar et al. (10,11) shown that non-squamous histology, tumor size and grade, node-positive disease, and a younger age were relevant clinical factors for brain metastasis. In addition, a variety of biomarkers have also been reportedly associated with brain metastasis (12-16). Compared with epidermal growth factor receptor (EGFR) wild-type, patients with NSCLC harboring EGFR mutations have higher risk for brain metastases (17,18). Moreover, brain metastases are more common in patients with a high expression of echinoderm microtubule-associated protein-like 4 (EML4) and anaplastic lymphoma kinase (ALK) (19,20).

Cell adhesion molecules (CADMs), also known as synaptic cell adhesion molecules (SynCAMs) or nectin-like molecules (Necls), consist of a protein family, the majority of which belong to the immunoglobulin superfamily. They are involved in the maintenance of cell adhesion, cell polarity and tumor suppression. CADMs, including CADM1, CADM2, CADM3, and CADM4, play an important role in tumor development, invasion and metastasis (21). In a variety of tumors, including prostate cancer, SCLC, and pancreatic cancer, the expression of CADM1 is down-regulated (22). Furthermore, CADM3 and CADM4 have also been found to be down-regulated in prostate and colon cancers (23-25). CADM2, which is a member of the CADM family, is an immunoglobulin-like CADM. Our previous study showed that CADM2 could regulate the development of brain metastasis in NSCLC cells by inducing epithelial-mesenchymal transition (EMT) (26), suggesting that CADM2 may act as an oncogene and promote metastasis. However, the effect of CADM2 on the prognosis of NSCLC patients with brain metastases has not yet been reported. Based on our previous research, we hypothesize that CADM2 might affect the prognosis of NSCLC patients with brain metastases.

To confirm our hypothesis we performed a retrospective study in patients with NSCLC and brain metastases analyzing the relationship between overall survival (OS) and CADM2 expression. We present the following article in accordance with the REMARK reporting checklist (available at http://dx.doi.org/10.21037/jtd-21-307).

Patients from the Affiliated Cancer Hospital & Institute of Guangzhou Medical University treated between January 2015 and December 2017 were included in this retrospective study. We received approval from the local research ethics committee of Affiliated Cancer Hospital & Institute of Guangzhou Medical University (No. 2020-57), and written informed consent was obtained from all subjects for sample collection and research use. All NSCLC diagnoses were cito-histologically confirmed and the presence of brain metastasis was radiologically confirmed. Tumor staging was assessed according to the tumor-node-metastasis (TNM) staging system. Included cases fulfilled the following criteria: (I) patients with newly diagnosed NSCLC and brain metastases; (II) histologically or cytologically confirmed primary NSCLC, with no history of other tumor types; (III) brain metastases detected by cranial computed tomography (CT), cranial magnetic resonance imaging (MRI), or both; (IV) complete clinical characteristics profile data available (gender, age, tumor location, histology, T category, N category, extracranial lesions, smoking status) available; (V) availability of histological specimens; (VI) Chinese origin. All procedures performed in this study involving human participants were in accordance with the Declaration of Helsinki (as revised in 2013).

Total ribonucleic acid (RNA) from lung tissue was isolated using TRIzol Reagent (Invitrogen, California, USA) according to the manufacturer’s instructions. Next, the extracted RNA was reverse-transcribed into complementary deoxyribonucleic acid (cDNA) using the Prime Script RT reagent Kit (TaKaRa, Shiga, Japan). QRT-PCR was performed using Premix EX TaqTM (Probe qPCR) (TaKaRa), and the primer sequences are shown in Table 1. The reaction conditions were as follows: pre-denaturation at 95 °C for 3 min, followed by 30 cycles at 95 °C for 30 s, annealing at 55 °C for 30 s and extension at 55 °C for 1 min. qRT-PCR was performed using the ABI PRISM® 7300 Sequence Detection System (Foster City, CA, USA). Each reaction was performed in triplicate. CADM2 expression was quantified by the 2−ΔΔCt method (13), and β-actin was used as an internal control.

One hundred and thirty-nine NSCLC patients with brain metastases were enrolled in this study. The baseline characteristics of the study group are summarized in Table 2. There were 79 males and 60 females, with the mean age of 57 years (range, 31–78 years). The mean duration of follow-up was 2 years.

Expression of CADM2 in NSCLC patients with brain metastasis

Associations between CADM2 and clinicopathological features were analyzed by the chi-square test (Table 3). CADM2 expression level was not associated with gender, age, tumor location, histological subtype, tumor T stage, smoking status, or extracranial metastasis. A significant association between CADM2 expression and lymph node metastasis (N) was observed (90.1% of patients with CADM2 high were N-positive vs. 77.9% in the group CADM2 low, P=0.049). Patients with positive lymph nodes (N1, N2, or N3) had a significantly higher level of CADM2 expression compared to those with negative lymph nodes (N0). 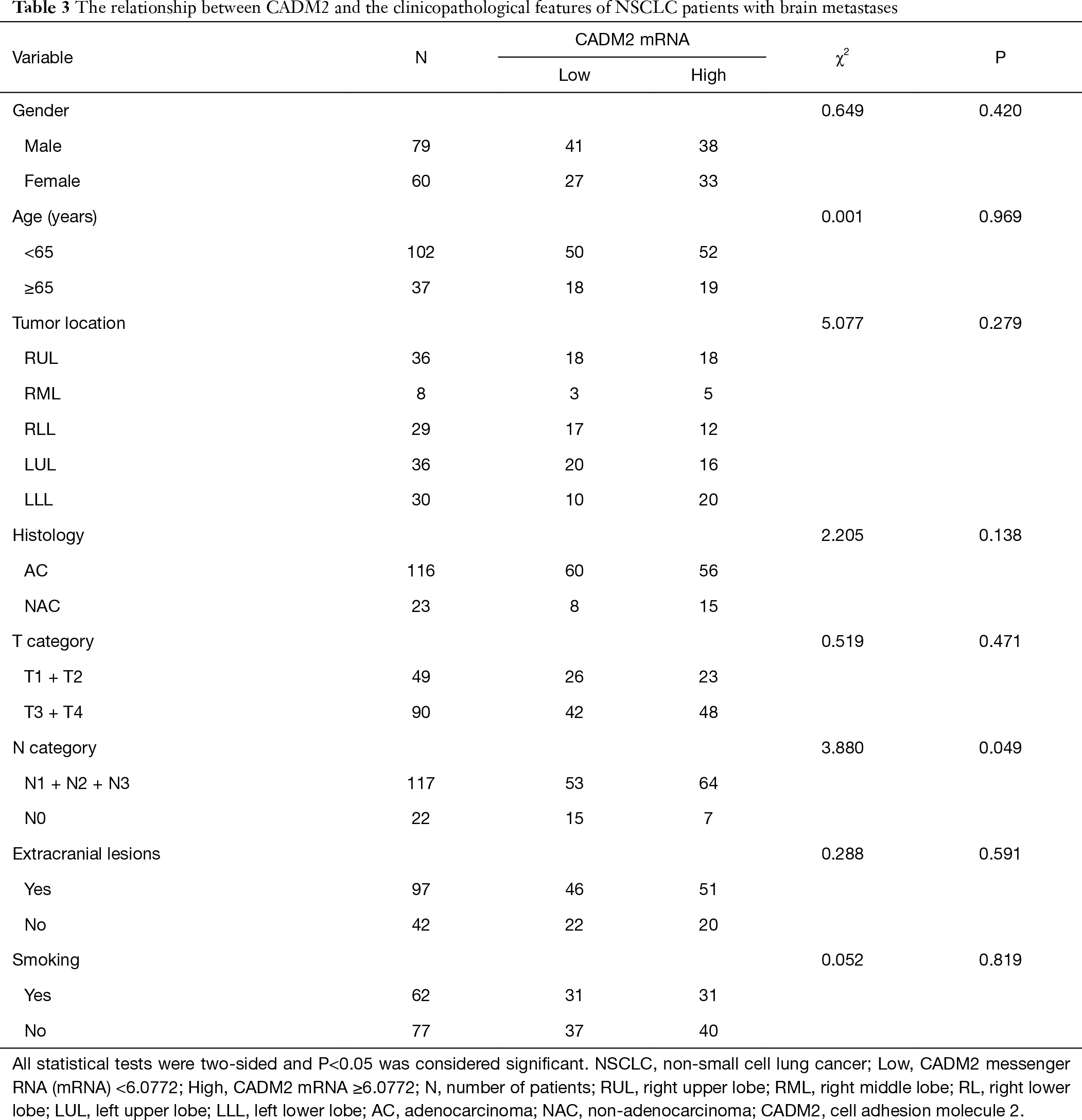 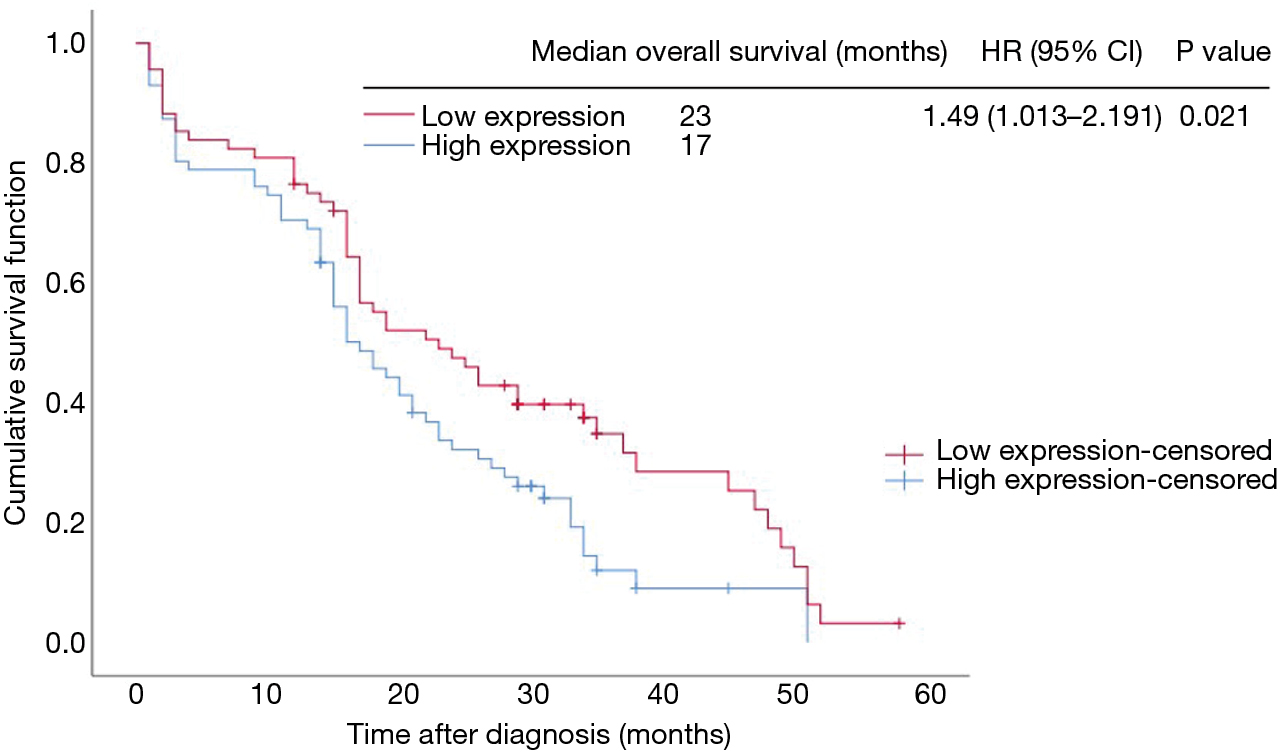 To identify potential prognostic significance, the univariate Cox model was applied to estimate individual clinical parameters for OS. The group with a value of 0 in Table 5 was considered as the control. No significant association was observed between OS and gender, tumor location, histological subtype, T stage, N stage, extracranial metastasis, or smoking status (Table 6). Conversely, age (P=0.031) and CADM2 expression level (P=0.026) were prognostic for OS in the univariate analysis (Table 6). These two variables were subsequently included in the multivariate Cox model, which showed that CADM2 expression level was an independent prognostic factor for OS, with a mortality rate in the high CADM2 group 1.49 times higher than that of low CADM2 group (P=0.043, Table 7). 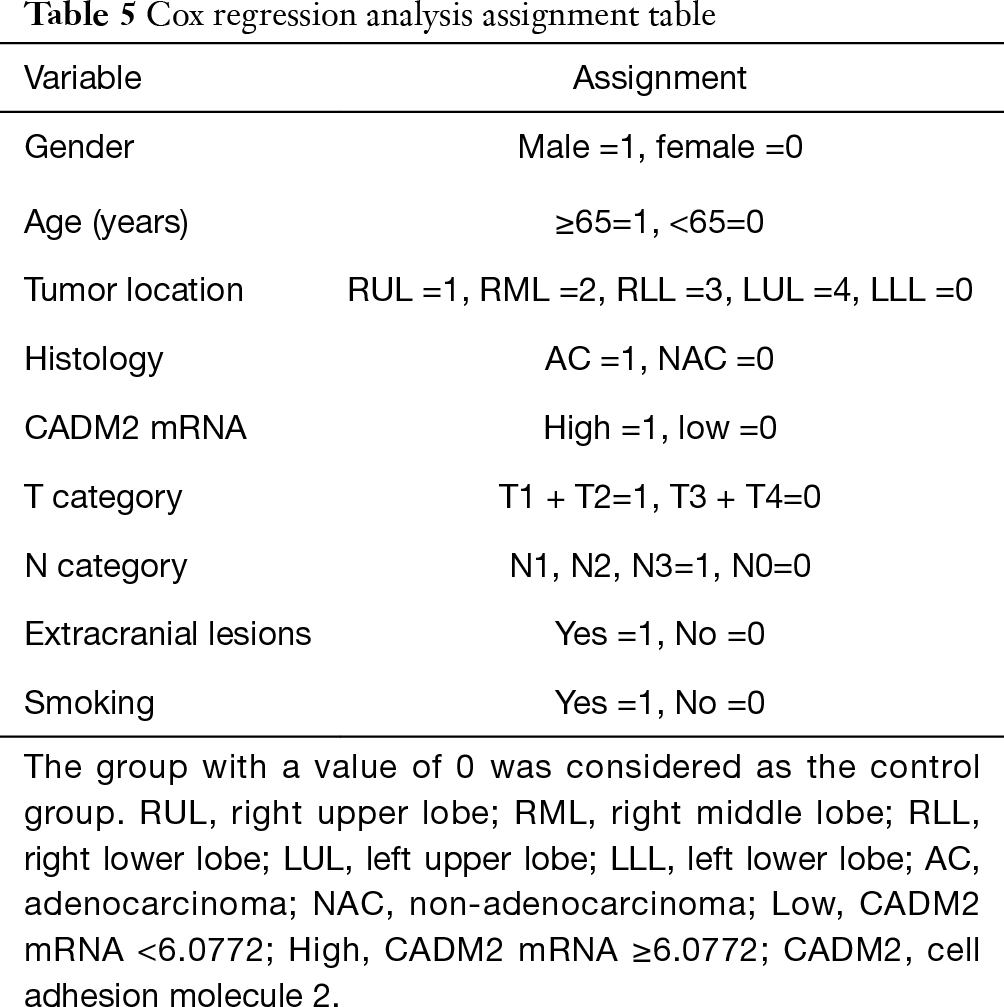 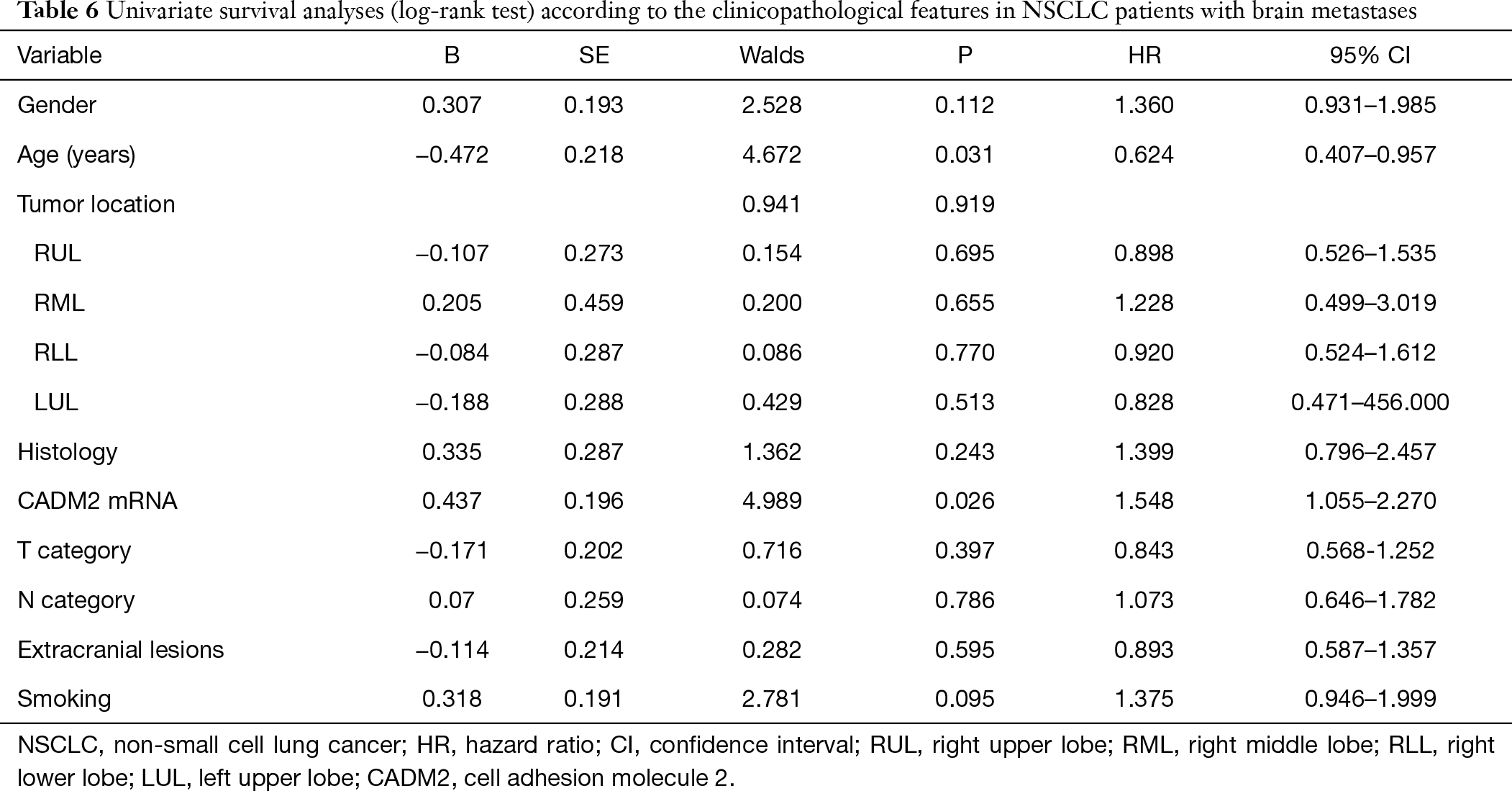 NSCLC patients with brain metastases are difficult to treat, due to the reduced distribution of cancer treatments across the blood brain barrier, a phenomenon which is associated with poor overall prognosis. Defining potential prognostic factors of brain metastases is of great clinical significance. Lee et al. (27) confirmed that pretreatment serum carcinoembryonic antigen (CEA) level was markedly related to brain metastases of advanced NSCLC. Our previous study demonstrated that CADM2 promoted brain metastasis by inducing EMT in human NSCLC (26).

CADM2 is expressed in many tissues, including liver, lung, and kidney. However, it is lowly expressed in tumors, especially in invasive and metastatic tumors. Li et al. (28) defined that overexpression of CADM2 could inhibit the EMT process, as well as the migratory and invasive ability of hepatocellular carcinoma (HCC) cells. They confirmed that CADM2 expression was significantly down-regulated in HCC tissues compared to normal according to The Cancer Genome Atlas (TCGA) data analysis and fresh HCC sample detection. Yang et al. (29) described that the expression of CADM2 was notably down-regulated in HCCs, and that expression was associated with serum alpha-fetoprotein (AFP), differentiation, vascular invasion, and hepatitis B surface antigen (HBsAg). In addition, they determined that CADM2 is an independent risk factor for HCC recurrence. Huang et al. (30) found that inhibition of microRNA (miR)-182 could suppress cell viability, invasion, and angiogenesis in retinoblastoma through inactivation of the phosphoinositide 3-kinase (PI3K)/protein kinase B (AKT) pathway and CADM2 up-regulation. In a separate study, Liu et al. (31) demonstrated that CADM2 was markedly down-regulated in human glioma tissues compared with normal brain and glioma cell lines, and that CADM2 expression level was significantly decreased in high-grade glioma tissues. CADM2 also inhibited the migration and invasion of U87 and U251 cells. Lastly, He et al. (32,33) reported that the CADM2 gene is downregulated in human clear renal cell carcinoma by DNA promoter hypermethylation and/or loss of heterozygosity. The loss of CADM2 expression was also associated with a higher tumor pathologic stage. The reason why CADM2 plays a different role in our study from prior reports may be that the background environment of the gene is different. Ultimately, the CADM2 mechanism is not clear and further study is needed.

Nevertheless, this study has several limitations. Firstly, the number of patients is relatively small and should be expanded. Secondly, all patients were from a single hospital in China, which is not widely representative of NSCLC from around the world. Thirdly, considering that the team performing this study is different from medical oncologist treating the patients, data on anticancer treatment received by the patients included are missing. Thus, larger, high-quality multicenter studies are needed for further validated our finding.

In conclusion, our study demonstrated that high CADM2 expression was associated with poor prognosis of NSCLC patients with brain metastases. CADM2 expression may represent a novel target for patients with brain metastasis that are poorly treated by conventional therapy. Improvements in screening, a more thorough understanding of tumor gene expression, and novel targets that impact actionable mutations represent important ways to reduce the mortality associated with NSCLC.

Reporting Checklist: The authors have completed the REMARK reporting checklist. Available at http://dx.doi.org/10.21037/jtd-21-307

Conflicts of Interest: All authors have completed the ICMJE uniform disclosure form (available at http://dx.doi.org/10.21037/jtd-21-307). Dr. AA reports personal fees from BMS, MSD, Astrazeneca, Pfizer, Roche, Boehringer, Ely-Lilly, outside the submitted work. The other authors have no conflicts of interest to declare.

Ethical Statement: The authors are accountable for all aspects of the work in ensuring that questions related to the accuracy or integrity of any part of the work are appropriately investigated and resolved. The study was approved by the local research ethics committee of Affiliated Cancer Hospital & Institute of Guangzhou Medical University (No. 2020-57), and written informed consent was obtained from all subjects for sample collection and research use. All procedures performed in this study involving human participants were in accordance with the Declaration of Helsinki (as revised in 2013).