There is no boundary for a walker and no end of journey for an explorer. On May 5, 2015, Prof. He Jianxing from the First Affiliated Hospital of Guangzhou Medical University, with his team performed the world’s first two cases of radical lung cancer resection using glasses-free 3D thoracoscope, opening the door to further innovations to advance medical development (Figure 1). 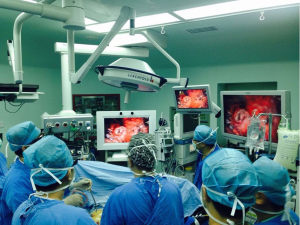 The successful integration of screen technology and the thoracic surgery was an expected outcome between Prof. He’s team’s collaboration with Shenzhen SuperD Optoelectronics Co., Ltd after numerous difficulties in satisfying clinical needs. The breakthrough marks a giant stride forward for the display system after 2D and aided 3D systems were developed and put into clinical practice.

The 2D thoracoscope was hailed as a remarkable medical breakthrough in the 20th century, because it enables surgeons to get a clear picture of the patient’s chest cavity by placing an endoscope inside the chest and projecting the image onto the display screen. Three small incisions (1-2 cm) are made on the body surface; after the endoscope was inserted, the operator can perform the surgeries by observing the “TV” screen. Subsequently, 3D HD video-assisted technology was developed to make the surgical process more visible. With 3D technology, the surgeon wears 3D glasses to monitor the surgical process on the 3D television, just like watching a 3D movie in the cinema. On the day, Prof. He and his team moved a step forward by successfully applying the glasses-free 3D thoracoscopic display system in surgical practice. This new technology allows surgeons to view the 3D image without wearing glasses and makes the surgery easier to perform and monitor.

As the main developer of the new technology and the principal operator of the two unprecedented surgeries, Prof. He emphasized the significance of the technology in an exclusive interview conducted by AME. “As the aided 3D thoracoscope technology evolves, thoracic surgeons noticed some problems of wearing 3D glasses to carry out a surgery, i.e., light becomes less bright after passing through the polariscope and surgeon cannot see very clearly as a result, and wearing the glass for a long time could lead to eye fatigue. The glasses-free 3D thoracoscope technology can fix these problems.” Prof. He said, “for surgeons who are not accustomed to wearing a glass, this technology can remove any discomfort brought by wearing 3D glasses, like lens dimmed by vapor water, a sense of pressure on nose and ears and dizziness caused by a long time of wearing the glass; for surgeons who have already worn glasses, they are relieved because they do not need to wear the second pair of glasses.” “This new technology is easier to be mastered by surgeons and therefore can be promoted more rapidly. In a word, it makes the surgery easier to perform, and easiness means higher precision.”

It’s even more exciting that the new technology can also be applied to hepatobiliary surgery, gastrointestinal surgery, and gynecological surgery. According to Prof. He, both surgeries he carried out were very complicated in lung cancer patients with large lesions. Complicated surgeries require higher precision, faster speed, and higher-quality image projections, and large blood vessels need to be properly managed after the lung resections. Both surgeries have been successfully performed with the help of glasses-free 3D thoracoscope, suggesting that the technology can be easily used in less complicated surgeries. He made a bold prediction that glasses-free 3D technology will eventually be applied to more than 95% of endoscopic surgeries. He also invited national colleagues to join the upcoming Symposium on VATS for Tracheal and Carinal reconstruction to take a close look at the new technology on May 16-17, 2015.

However, this is just the beginning of an ongoing revolution. Prof. He said, “In the past, our innovations were largely focused on procedures and skills. Today the glasses-free 3D thoracoscopic technology allows surgeons to perform and monitor surgeries more easily and accurately.” He recalled that in 1996, he saw the needlescope for the first time in a U.S. Laboratory, and came up with an idea that this technology might probably be applied in thoracic surgeries. That idea eventually became a reality in October 1996. “Today, the endless pursuit of newer technologies to help patients reduce pain is motivating us to develop the glasses-free 3D thoracoscope technology”, he concluded, “and that is just the beginning of our journey to make the two-dimensional world as natural and real as it is.”

Our latest collaboration with the First Affiliated Hospital of Guangzhou Medical University has targeted clinical needs and developed the 3D thoracoscope display system characterized by four prominent technological features: (I) design, production, and fitting of spectro-grating that can be viewed from a certain distance in the operating room; (II) development of human eye recognition and tracking techniques; (III) development of graph drawing algorithms based on human-eye tracking technology; (IV) development of the technology for transmitting and processing HD video streaming. The developer team overcame a number of technological barriers and finally presented a comprehensive solution to address problems in imaging, optical design, and manufacturing processes. A preliminary testing of the display system shows it can eliminate the disadvantages of aided 3D display system and make the surgeons feel more comfortable during the operation. In addition to its application in thoracic surgeries, the system can also be used in other surgeries.

Today is a historic moment. We made a success in completing the world’s first two cases of glasses-free 3D thoracoscope surgeries with good curative effectiveness. This technology, first developed in China and never seen before in the rest of the world, provides better surgical conditions, clearer views, and brighter images to help surgeons perform more complicated surgeries, and patients can benefit as well.

The glasses-free 3D technology makes the surgical process more convenient, and may help shorten surgeons’ learning curve to master it.