Atrial fibrillation is an independent risk factor of cerebral ischemic stroke and anticoagulant therapy is particularly important for the prevention of cerebral arterial thrombosis (1,2). Strategies for antithrombotic therapy are made according to the thromboembolism and bleeding risk evaluation of atrial fibrillation patients, with the CHA2DS2-VASc score the most common scoring system evaluating thromboembolism risk in patients with atrial fibrillation (3). In 2010, the anticoagulation bleeding risk scoring system (HAS-BLED) was firstly proposed in ESC guidelines for the management of atrial fibrillation (4). The red cell distribution width (RDW) mainly reflects the nonuniformity of red blood cell volume in peripheral blood and in the past, has mainly been used in the clinical evaluation of hematological system diseases (5). Research has shown that RDW was associated with the prognosis of cardiovascular disease such as heart failure, coronary heart, disease and atrial fibrillation (6-9) and with some components of major scoring systems such as those used in stroke and hypertension (10,11). In the absence of clinical information to calculate embolism or bleeding scores, a convenient index with a high predictive value for CHA2DS2-VASc or HAS-BLED scores, stroke, and bleeding risk would hold high clinical utility. While Kurt et al. (12) showed that the RDW value could be used as an independent predictive factor for high CHA2DS2-VASc scores (≥2), to date, there has been no research reporting the relationship between RDW and HAS-BLED, which is the objective of this study.

We present the following article in accordance with the STARD reporting checklist (available at http://dx.doi.org/10.21037/jtd-21-567).

Atrial fibrillation was defined as absolutely irregular RR intervals and no discernible, distinct P waves (1). We evaluated the risk of bleeding with HAS-BLED score using specific scoring rules which included (4) hypertension, abnormal renal/liver function, stroke, bleeding history or predisposition, labile international normalized ratio, elderly (N>65), and drugs/alcohol concomitantly (Table 1), with a score of “≥3’’ recognized as a high bleeding risk. We also employed a HAS-BLED score that is used to estimate the risk of long-term bleeding events associated with atrial fibrillation in which patients scoring “≥3’’ were allocated into a high-risk group and those with a score of “<3’’ were allocated to a no-high risk group. 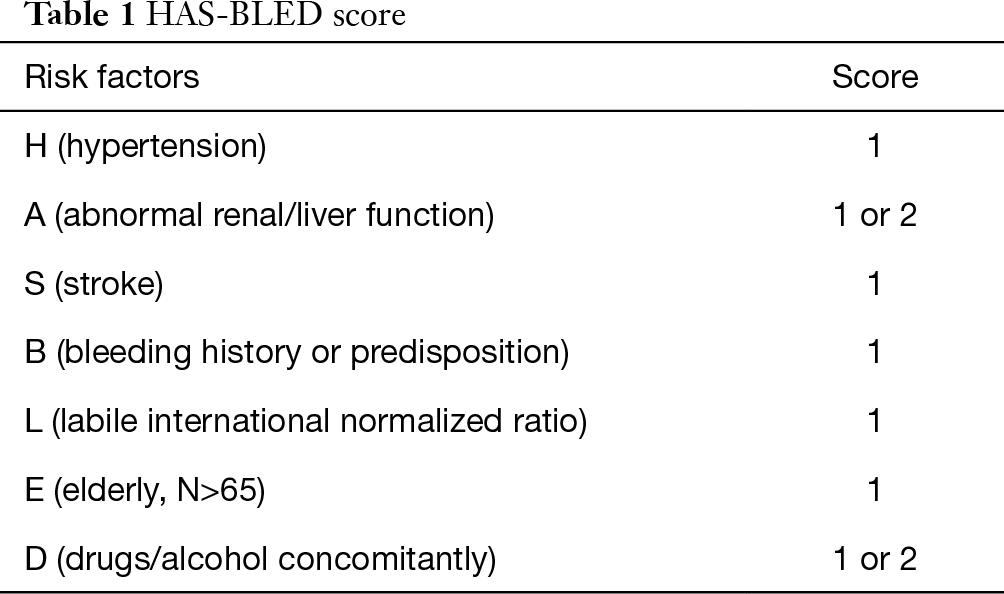 All procedures performed in this study involving human participants were in accordance with the Declaration of Helsinki (as revised in 2013). The study was approved by the Institutional ethics Committee of the Second Affiliated Hospital of Nantong University (No. 2020KN088) and informed consent was taken from all the patients.

The measurement data were presented as means ± standard deviation, while the enumeration data were presented as percentage or frequency. Independent-sample t-test and chi-square test were applied in comparing the measurement data and the enumeration data in the two groups, respectively, and bivariate Spearmen was used for the correlation analysis. The predictive values of RDW on a high HAS-BLED score was completed through receiver-operating characteristic (ROC) analyses and multiple logistic regression analysis was used to evaluate the relationship between variables and a high HAS-BLED score. Variables with a P value <0.1 in univariate logistic regression analysis were included in a multivariate logistic regression model and the results of the regression analysis were presented as odds ratios and 95% confidence intervals. The data analysis was completed with SPSS 17.0 (SPSS Inc., Chicago, Illinois, USA) and Med-Calc (version 11.2.1; MedCalc, Mariakerke, Belgium) and a difference of P<0.05 was deemed as statistically significant. 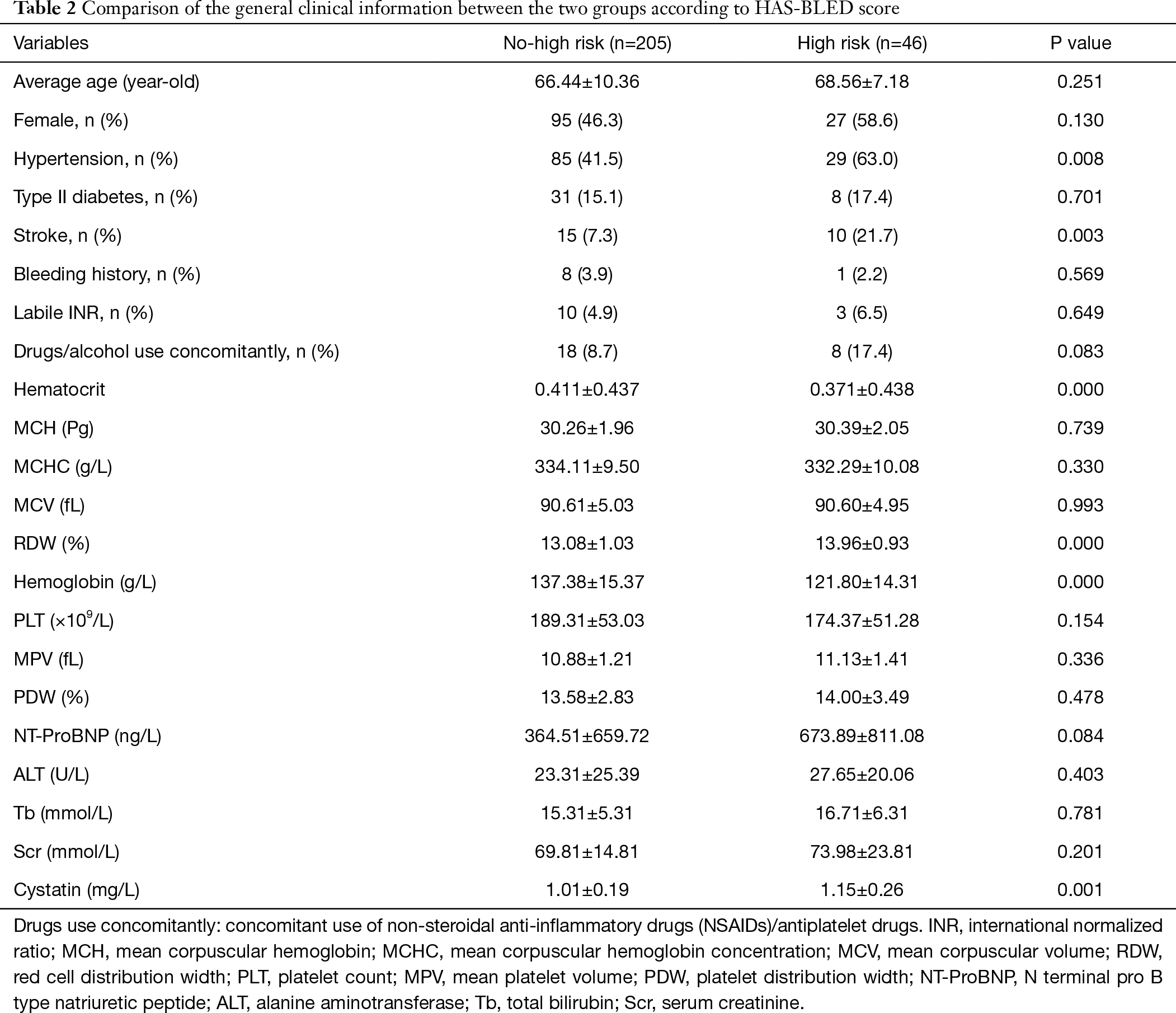 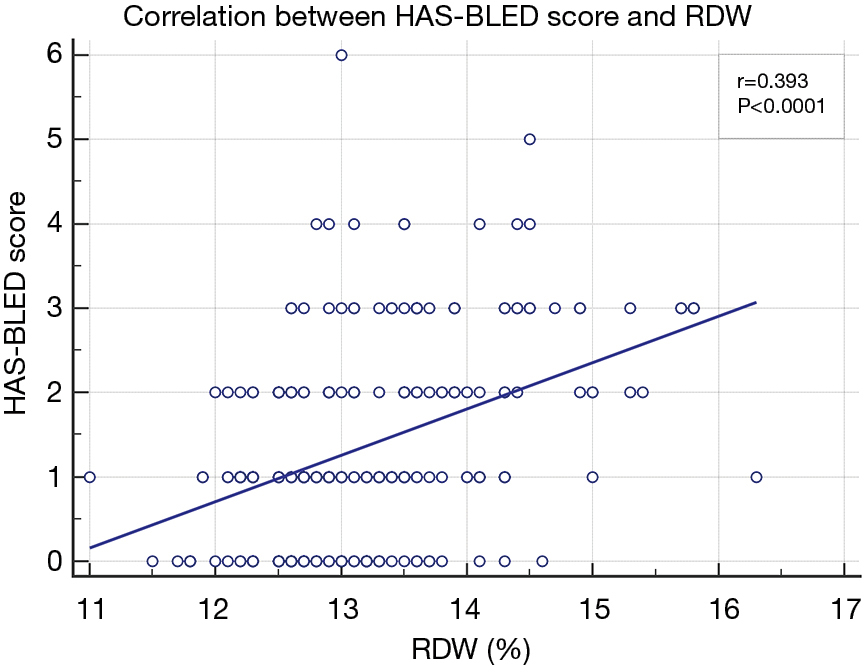 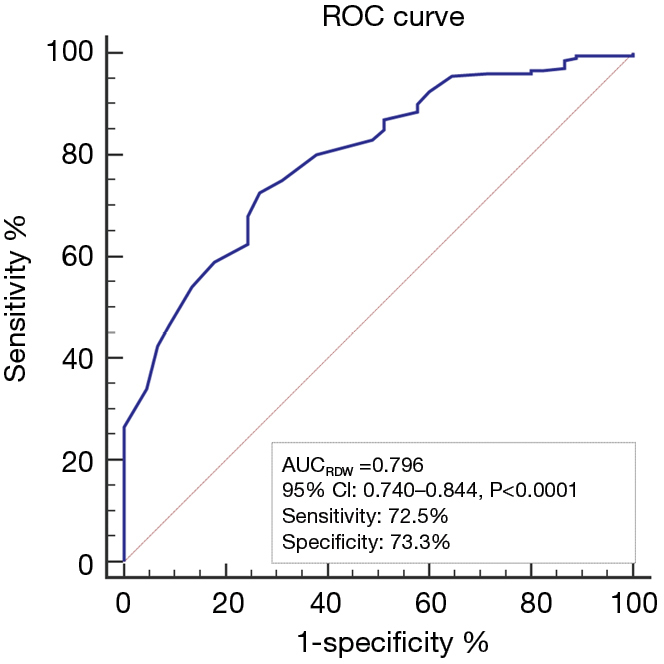 Atrial mural thrombi can cause cerebral embolism and stroke, and patients with atrial fibrillation have a higher fatality rate, invalidism rate, and hospitalization stay duration than those without. Different strategies for anticoagulation management may be used according to the evaluation of CHA2DS2-VASc scores on thromboembolism risk. RDW reflects the dispersion degree of red blood cells in peripheral blood and in the past, was mainly used for the morphological classification of anemia including the differential diagnosis of iron-deficiency anemia clinically (13). Lee et al. (9) showed that the incidence rate of CHA2DS2-VASC scores and cerebral arterial thrombosis increased with an increasing RDW value. While preventing thrombus, bleeding risk should also be evaluated in the process of using anticoagulant drugs and at present, the HAS-BLED scoring system is the most widely used scoring system. Research has shown that RDW was also correlated to HAS-BLED scores, and can be used as an independent predictive factor of high HAS-BLED scores.

An increased RDW has been shown to be associated with high blood pressure and could be used as a predictive factor of high blood pressure organ damage (14). A large-scale cohort study of Hoffmann (15) showed that RDW was age dependent and tended to increase with age, while Lippi et al. (16) studied RDW and creatinine values in a large sample of outpatients and found that RDW was negatively correlated with renal function. In addition, correlation between high RDW values with abnormal liver function and ischemic stroke has been demonstrated in several studies (17-19). High blood pressure, age, abnormal hepatorenal function, and stroke are the major factors which constitute the HAS-BLED score system and this may explain the predictive value of RDW on high HAS-BLED scores. At present, an increase in the RDW value is believed to be correlated with factors such as a lack of nutrients, including folic acid and vitamin B12, which cause anemia, and the resulting changes to hemopoietin cause impaired renal function, activation of the neuroendocrine system, oxidative stress, and in vivo neuroendocrine system changes (20-26).

The major limitations to this study are its small sample size, short follow-up period, and that it was limited only to the correlation between RDW and HAS-BLED.

RDW values are easy to obtain, have a strong predictive value for high HAS-BLED scores, and can be used as an auxiliary index to evaluate bleeding risk in the process of atrial fibrillation anticoagulation therapy.

We acknowledge the assistance of all doctors, nurses, technicians, ambulance paramedics, and hospital staff who cared for our patients.

Reporting Checklist: The authors have completed the STARD reporting checklist. Available at http://dx.doi.org/10.21037/jtd-21-567

Conflicts of Interest: All authors have completed the ICMJE uniform disclosure form (available at http://dx.doi.org/10.21037/jtd-21-567). The authors have no conflicts of interest to declare.

Ethical Statement: The authors are accountable for all aspects of the work in ensuring that questions related to the accuracy or integrity of any part of the work are appropriately investigated and resolved. All procedures performed in this study involving human participants were in accordance with the Declaration of Helsinki (as revised in 2013). The study was approved by the Institutional ethics Committee of the Second Affiliated Hospital of Nantong University (No. 2020KN088) and informed consent was taken from all the patients.