Lung cancer has been reported to be the leading cause of cancer mortality worldwide, and approximately 85% of primary lung cancer diagnoses are non-small cell lung cancer (NSCLC) (1). Even though surgery remains the mainstay of treatment for NSCLC, early recurrence often occurs even in patients who undergo curative-intent resection, early recurrence often develops even in patients with early disease who undergo complete resection, and the recurrence risk in NSCLC varies throughout the follow-up duration (2,3).

Although these previous studies simply analyzed the total risks of events using cumulative incidence curves plotted by the Kaplan-Meier method, such curves do not provide direct information on changes in event-specific hazard rates during the follow-up period. To our knowledge, the relationship between the timing of recurrence and inflammation-based scores has never been evaluated using hazard curves. It is necessary not only to determine the total risk of recurrence but also to ascertain when recurrence is most likely to develop. In addition, to understand how the preoperative inflammation-based scores are related to changes in the recurrence risk over time would be beneficial to achieve a more efficient follow-up surveillance.

Therefore, in the present study, we evaluated the influence of inflammation-based scores on the timing of recurrence after complete resection for NSCLC.

We present the following article in accordance with the REMARK reporting checklist (available at http://dx.doi.org/10.21037/jtd-20-3458).

This study was conducted in accordance with the Declaration of Helsinki (as revised in 2013). The study was approved by the institutional ethics board of National Hospital Organization Yokohama Medical Center (No. 2019-11), and individual consent for this retrospective analysis was waived. The patients’ records of 448 subsets who underwent complete resection of NSCLC from January 2010 to December 2019 were investigated. Patients who died during the immediate postoperative period, those with recurrence within 3 months after surgery, those with acute infection (e.g., empyema, pneumonia), those with active double cancer, those who underwent induction chemotherapy, those with history of surgery for NSCLC, and those taking corticosteroids or immunosuppressive drugs were excluded. Finally, 387 patients (233 men, 154 women) with a single primary tumor were enrolled in this study (Figure 1). 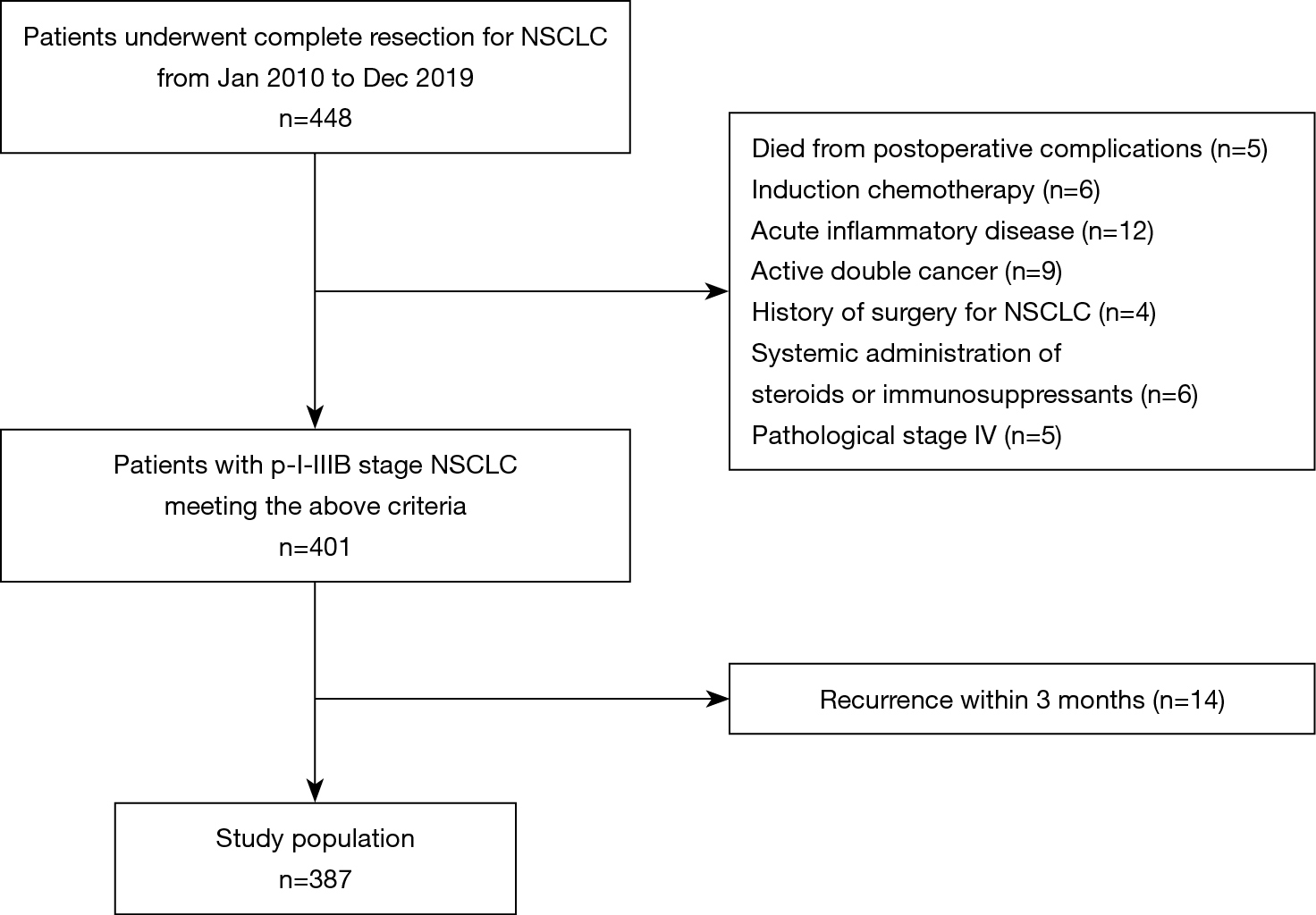 Routine preoperative staging investigations were performed using high-resolution computed tomography (HRCT) of the chest and abdomen combined with brain imaging, bone scintigraphy or positron emission tomography (PET), and tumors were staged according to the tumor, lymph node, and metastatic Classification of Malignant Tumors, seventh edition (21). A single primary tumor was diagnosed in all patients, and no patients had a history of lung cancer (excluding those with multicentric cancers).

Follow-up evaluations included physical examination, chest radiography, and CT scanning of the chest and abdomen. In general, CT was performed every six months in the first two years after surgery and annually thereafter. Additional imaging studies including CT, brain MRI, bone scintigraphy, and PET were performed for patients with any signs or symptoms of recurrence as required.

Recurrence was diagnosed with the assistance of a radio-oncologist based on the findings of a physical examination and diagnostic imaging findings, and it was histologically or cytologically confirmed if necessary. Cases with second primary lung cancers defined as a single lung lesion occurring after a prior resection (22,23) were excluded.

The recurrence-free survival (RFS) was defined as the interval between the date of surgery to the date of recurrence or death, and patients without any events were censored on the date of the last follow-up. The RFS was analyzed using the Kaplan-Meier method with the log-rank test. The muhaz package for smoothing a hazard function for censored data proposed by Müller and Wang (24) was used to estimate the hazard curves. The cut-off values of the CAR, NLR, PLR, SII, and ALI to test the predictive ability for disease recurrence were determined by a receiver operating characteristic (ROC) curve analysis. A multivariate Cox regression analysis adjusting for the age, sex, smoking status, BMI, surgery type, surgical procedure, and pathological stage was performed to evaluate the relationship between inflammation-based scores and the RFS. All analyses were conducted using R 3.6.2 (R Foundation for Computing, Vienna, Austria) software programs. P values of less than 0.05 were considered to indicate statistical significance. A professional statistician reviewed and verified the statistical analyses.

One hundred and five (27.1%) of the 387 patients experienced recurrence (local recurrence in 43 patients and either distant metastasis alone or both local recurrence and distant metastasis in 62 patients). Figures 2 and 3 show the Kaplan-Meier survival curves of recurrence after surgery for each inflammation-based score. Patients with elevated CAR, SII, and mGPS values had a significantly poorer RFS than those with lower values. The resulting hazard curves in patients with elevated CAR and SII values showed an initial sharp and high peak within one year after surgery, indicative of early recurrence. In contrast, the peak of patients with low values had a relatively wide gentle slope (Figure 4). 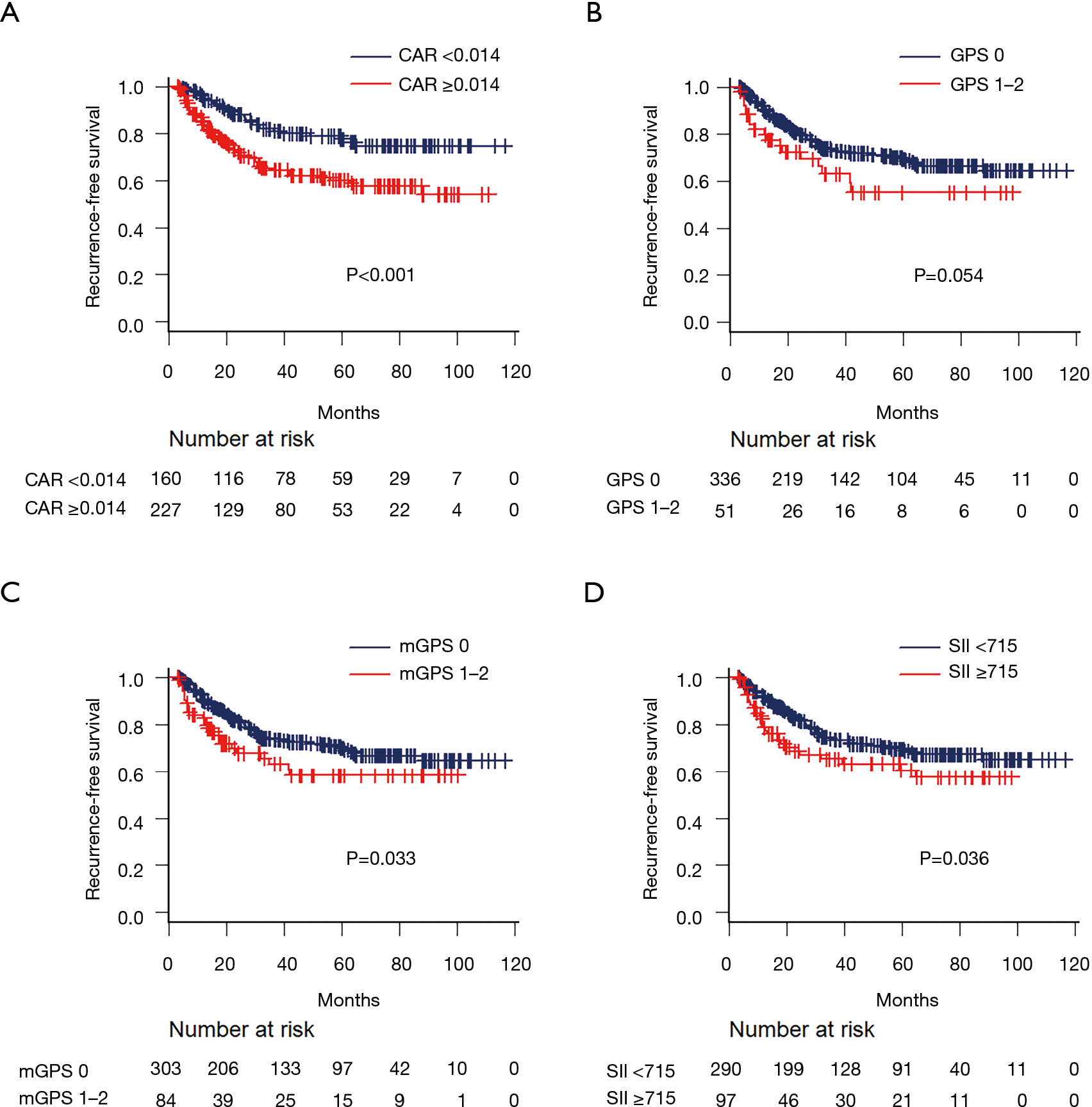 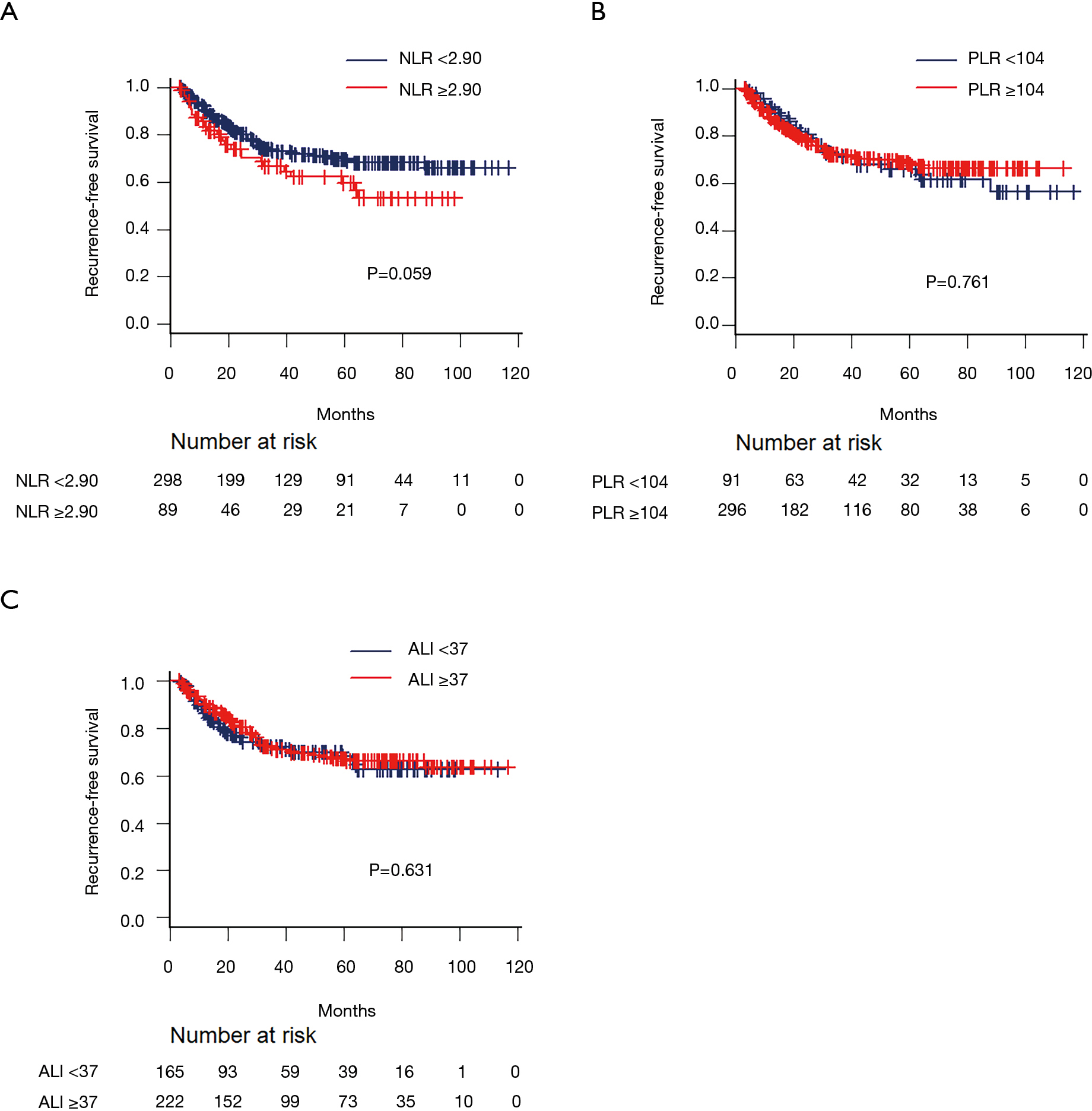 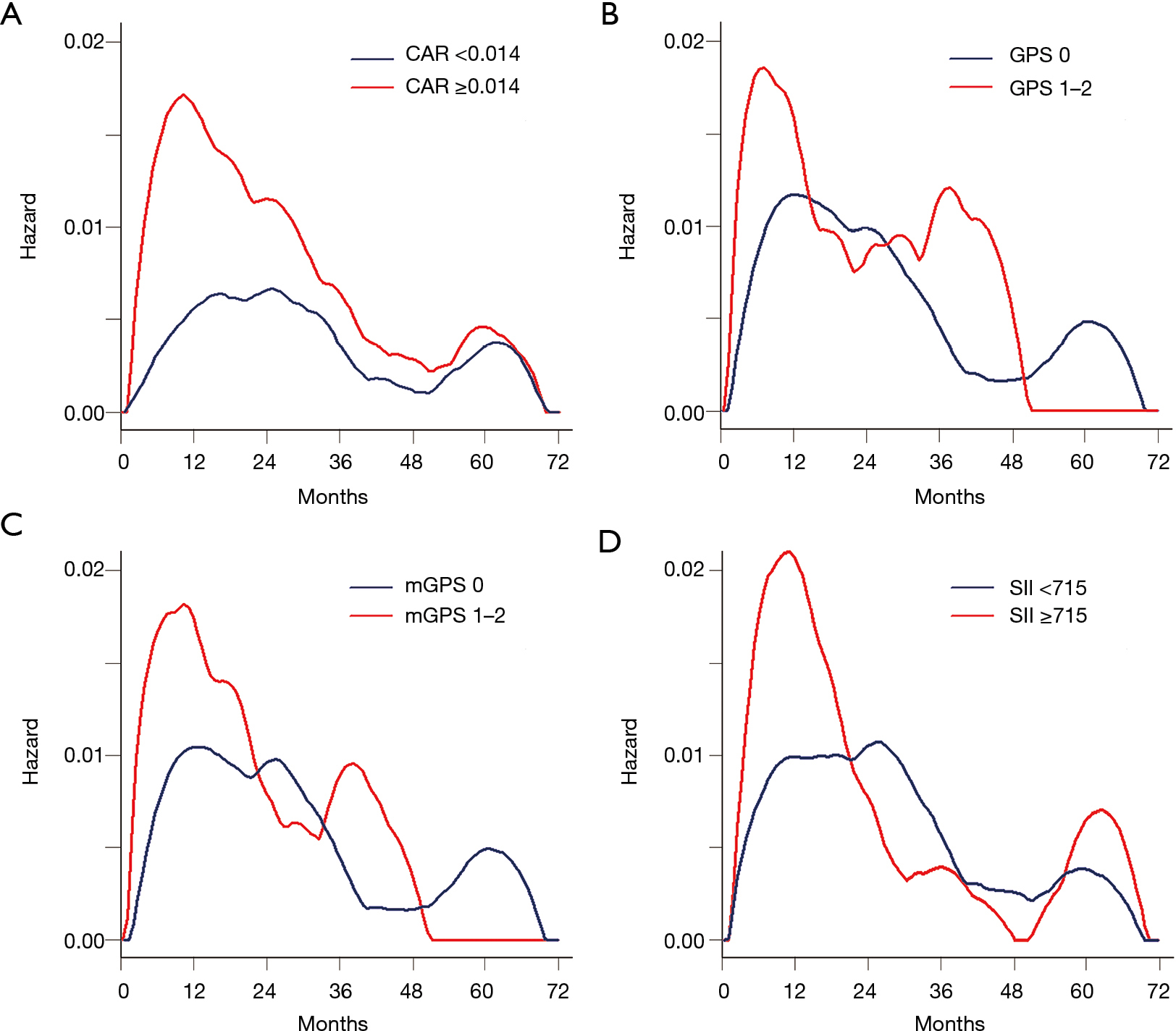 A comparison of inflammation-based scores in cases with pathological stage I and stage IIA or higher disease showed that patients with elevated CAR, SII, and mGPS values were significantly more common in patients with advanced-stage NSCLC than in those with stage I NSCLC (Table 2).

According to a multivariate analysis of the RFS, the CAR (P=0.007) was found to be an independent prognostic factor (Table 3). 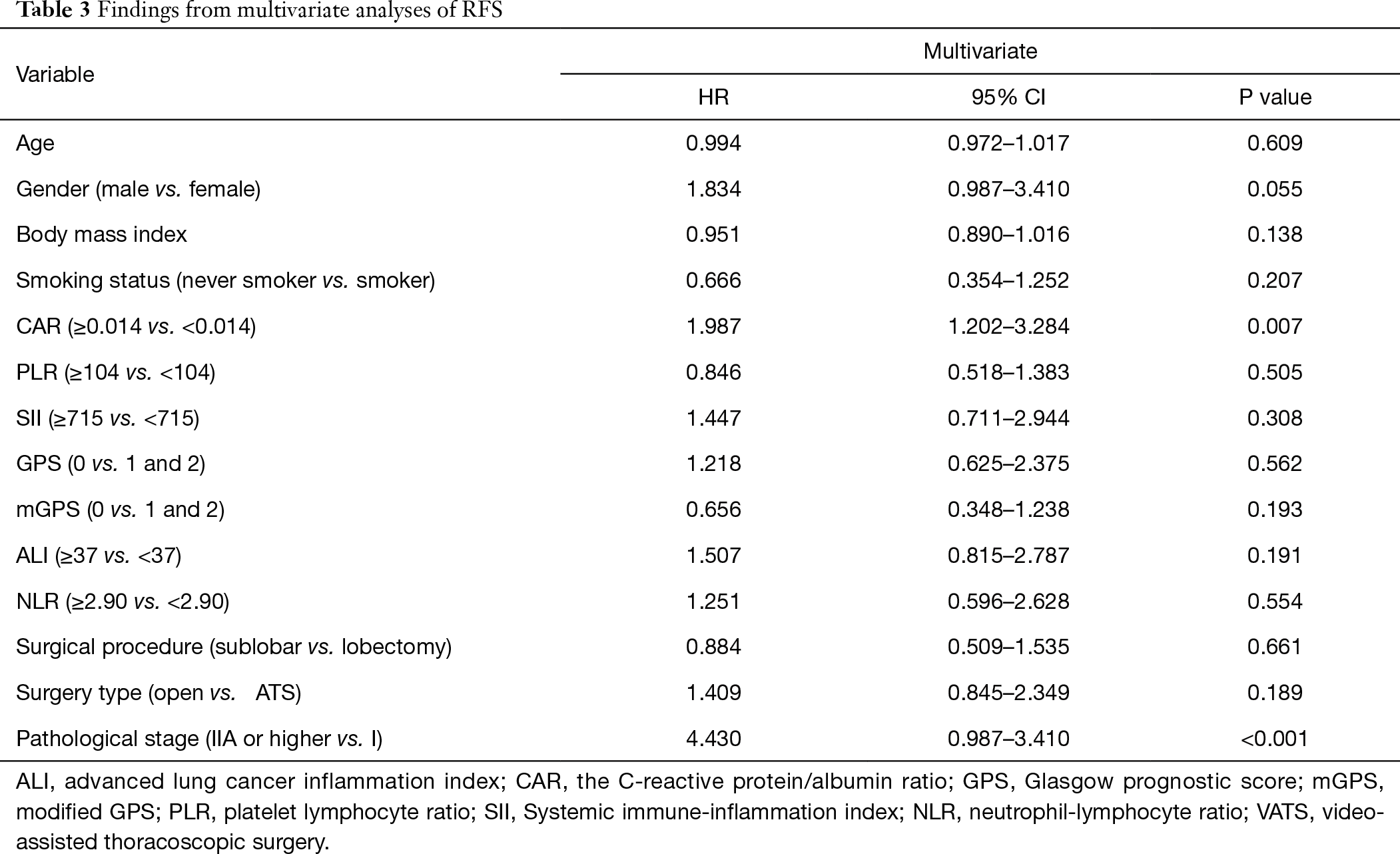 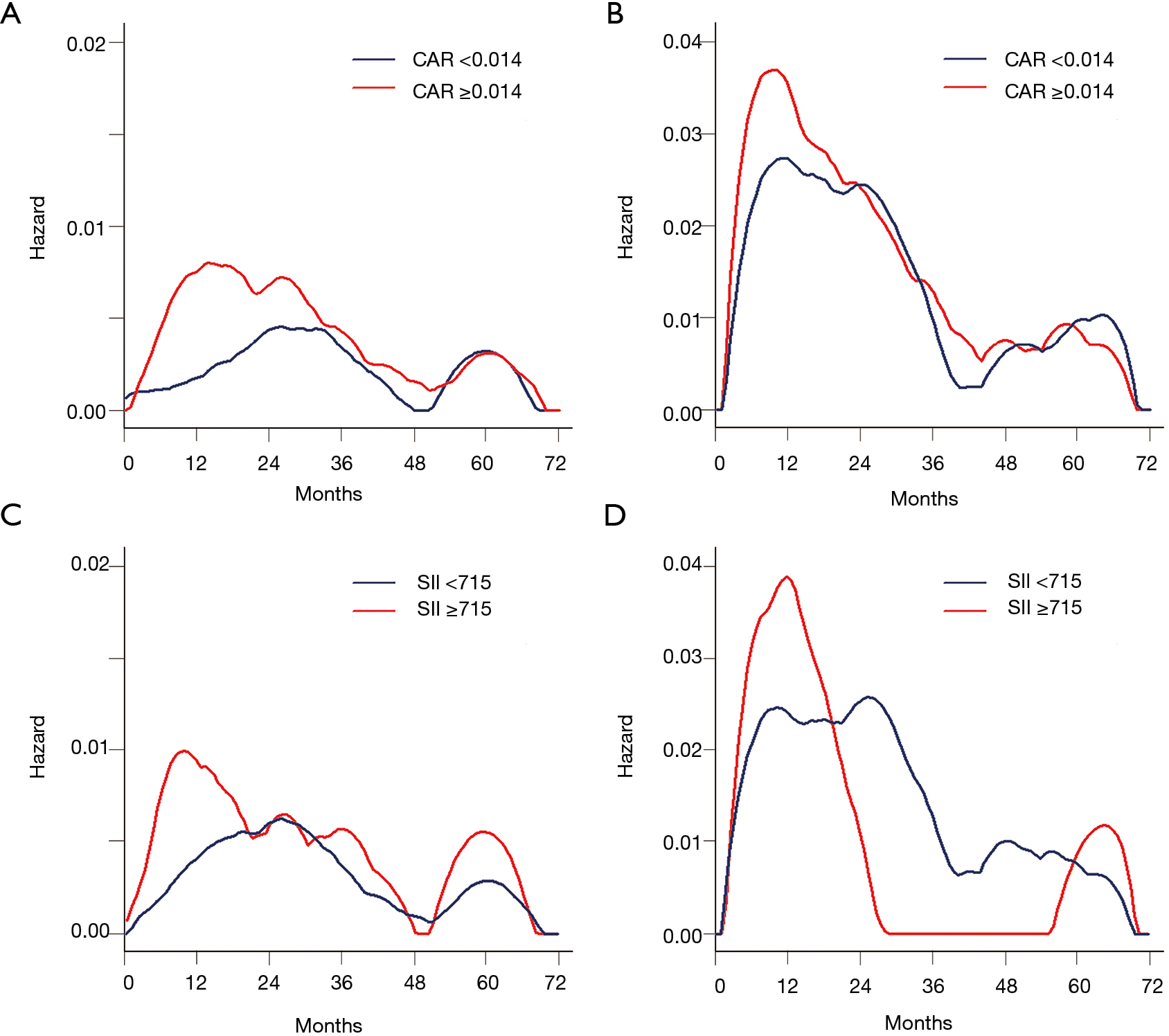 To our knowledge, this is the first report to describe a relationship between the timing of recurrence and inflammation-based scores for resected NSCLC patients using hazard curve. Since the time of Virchow, inflammation has been linked to cancer (25). It has been reported that the systemic inflammatory response may play a role in the development of cancer by inducing genetic instability, stimulating proliferative and survival signals, promoting invasion and metastatic spread, and enhancing local immunosuppression (4,5,7,26).

Many studies have already shown that the presence of a systemic inflammatory response in cancer patients is associated with hypoalbuminemia and excessive weight loss, thus leading to a poor performance and reducing survival in various malignancies (27,28). In this context, not only the CRP levels and neutrophil count but also serum albumin levels are strongly connected to systemic inflammation. Recent studies have revealed relationships between lung cancer and inflammation-based scores, including the CAR, SII, GPS, and mGPS, and have reported that such inflammation-based scores may be useful indicators of the prognosis in patients with resected NSCLC (8,9,14-19).

Although various inflammatory mediators such as inflammatory cytokines, vascular endothelial growth factor (VEGF), and prostaglandins reportedly play an important role in cancer progression (6-8), the mechanism underlying the relationship between systemic inflammation and early recurrence of cancer remains poorly understood. Furthermore, it is difficult to explain why there is a peak at all and why it comes so soon after complete resection. Possible explanations include that patients with elevated CAR, SII, GPS, and mGPS values have (I) tumors with an inherently more aggressive growth nature and (II) a decreased ability to inhibit micrometastases that have disseminated to different parts of the body during the preoperative period than those with low values. Regardless, the fact that the initial surge of recurrence develops so shortly after complete resection indicates that systemic inflammation triggered by surgical invasion disrupts the microenvironment, thus causing the production and secretion of various inflammatory mediators, thus accelerating the proliferation of tumor cells in previously undetectable metastatic lesions (32,33).

Our results suggest the significance of focusing on the timing of recurrence as well as the total recurrence risk. It may therefore be effective to identify the sub-groups of patients who are most likely to develop early recurrence within a determined stage. At present, there is no consensus regarding the usefulness of postoperative follow-up (34), and tumor recurrence after complete resection remains the primary cause of cancer-related death. However, advances in molecular-targeted therapy and immunotherapy have improved the outcomes in patients with recurrent NSCLC. Although biologically aggressive, patients with recurrent NSCLC can be treated with drug therapy, if the presence of a driver mutation is confirmed. Therefore, it is reasonable to suppose that the early detection and treatment of recurrence may improve the patient survival rates and quality of life. In addition, based on our findings, it is reasonable to assume that patients with elevated CAR, SII, GPS, and mGPS values need more intensive surveillance than those with low values. Consequently, a method for analyzing the risk of postoperative recurrence based on a hazard curve is needed to accurately detect treatable recurrent diseases, thereby minimizing the frequency of imaging studies.

The tumor histology, biomarker values [e.g., epidermal growth factor receptor (EGFR), anaplastic lymphoma kinase (ALK), and programmed death receptor 1 (PD-L1)], and postoperative TNM classification together represent the gold-standard for predicting the outcomes of NSCLC at present. However, these are tumor-related factors that are obtained after surgery. In contrast, inflammation-based scores are host-related factors that can be confirmed preoperatively and are independent of the postoperative findings. The CAR, GPS, and mGPS, calculated by means of the serum CRP and serum albumin levels, may reflect both the inflammatory condition and nutritional status. The SII is calculated using the following formula: platelets × neutrophils / lymphocytes. An elevated SII usually suggests a higher level of inflammation and a lower level of immunity in patients (18). These inflammation-based scores are objective, simple, universally available, and cost-effective measurements. Together with the postoperative histopathological findings, these preoperative inflammation-based scores represent a reliable supportive prognostic parameter for identifying patients at risk of early recurrence and tailoring the postoperative follow-up to individual patients with NSCLC.

The present study is associated with several limitations. First, this was a retrospective study with a limited number of patients and was performed at a single institution. Therefore, there may be a selection bias. Further prospective studies with larger populations therefore need to be carried out to determine the role of inflammation-based scores in predicting postoperative recurrence for NSCLC.

In conclusion, an elevated CAR value was significantly associated with a poor RFS, and patients with elevated CAR and SII values retain a high risk of early recurrence even after complete resection of stage I NSCLC. In addition, preoperative inflammation-based scores can be an objective, simple, and cost-effective measurements for predicting early recurrence.

Reporting Checklist: The authors have completed the REMARK reporting checklist. Available at http://dx.doi.org/10.21037/jtd-20-3458

Conflicts of Interest: All authors have completed the ICMJE uniform disclosure form (available at http://dx.doi.org/10.21037/jtd-20-3458). The authors have no conflicts of interest to declare.

Ethical Statement: The authors are accountable for all aspects of the work in ensuring that questions related to the accuracy or integrity of any part of the work are appropriately investigated and resolved. The study was conducted in accordance with the Declaration of Helsinki (as revised in 2013). The study was approved by the institutional ethics board of National Hospital Organization Yokohama Medical Center (No. 2019-11), and individual consent for this retrospective analysis was waived.