Patients with low pulmonary function due to emphysema or interstitial pneumonia have a high frequency of postoperative complications, which may be severe (5-7). Prevention and early detection of postoperative respiratory complications are urgent issues. Until now, the less invasive pulse oximeter has been used as the standard for postoperative respiratory monitoring. However, in recent years, using oxygenation alone as an evaluation index has become increasingly insufficient in detecting respiratory failure postoperatively. In other words, a device that monitors ventilation is preferable to assess the respiratory state accurately in the acute phase. Ventilation monitoring technology can be used to evaluate the respiratory state based on the measurement of thoracic impedance (8), respiratory sound patterns (9), and imaging (10). Recently, the review by Tukanova et al. reported the usefulness of that the respiratory inductive plethysmography and compartmental analysis of the chest wall volume by means of an optoelectronic plethysmography (11). However, there is no effective device or objective index for such postoperative monitoring.

The stretchable sensor developed by Yamaha Corporation (GummiStra™, Yamaha Corporation, Hamamatsu, Japan) consists of a special fiber that acts as a strain sensor (12). It is attached to an arbitrary body surface in a tight seal. Target muscle movement is measured based on the stretched width of the fiber and is continuously digitally processed and recorded. By placing sensors on both sides of the rib cage, it is possible to directly measure and record the ventilation state, breathing rate, and breathing depth. This makes it easy to compare postoperative respiratory states, which was not possible before. The stretchable sensor itself is small and easy to handle and is similar to an electrocardiogram or pulse oximeter used in conventional postoperative management. We performed this feasibility study to assess thoracic maximum movement width using the stretchable sensor.

A stretchable sensor was provided by Yamaha (Yamaha Corporation). This sensor detects elongation and contraction of material. Change in electric resistance is measured using nano structural changes in carbon nanotube (CNT) and with a multi-layered tube structure called multi wall CNT (MWCNT). The sensor is thin and flexible; its electrical resistance changes according to repeated stretching and shrinkage (Figure 1A). It can detect and record discrimination between small and large distortions. CNT-based stretchable sensors have excellent response and linear changes based on elongation-resistance relationship. The sensor length is 6 cm.

The schematic diagram of the monitoring system is shown in Figure 1B,C.

The postoperative monitoring system consists of the following two components: (1) the stretchable sensor and (2) personal computer with software for analysis of data.

The lung monitoring system was placed on bilateral chest walls across the 6th–9th ribs and chest wall motion was assessed preoperatively for more than 10 min and immediately after surgery. The monitoring was continued until the next morning (Figure 2). 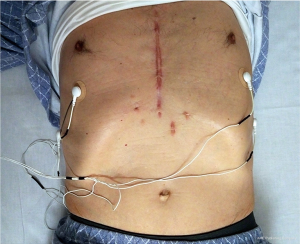 The data were processed using a finite impulse response (FIR) filter. Noise including the body position fluctuations and transient muscle tone was removed. The variables were adjusted so that only respiratory data remained (Figure 3). The adjusted data were confirmed with the respiratory pattern in each case.

Figure 3 The relative change of resistance in chest motion from stretch to shrink. (A) Inhalation; (B) exhalation.

The primary outcome in this feasibility study was the recording of inhalation and exhalation in bilateral lungs using the stretchable sensor. The secondary outcomes were to evaluate the relationship between (1) the surgical approach and chest wall motion, (2) chest wall motion in chronic respiratory disease and normal lung, (3) postoperative complications and the data of the stretchable sensor.

This study was approved by the ethics committee of the Tokyo Medical and Dental University in March 2018 (M2017-255). And the study was conducted in accordance with the Declaration of Helsinki (as revised 2013). Informed consent was obtained from all patients. Overall, 50 patients who underwent lung resection with segmentectomy or lobectomy for resectable lung tumors at Tokyo Medical and Dental University Hospital between September 2018 and April 2019 were enrolled. For surgical approach, open thoracotomy was selected for patients with low lung function and preoperative treatment. For segmentectomy, we included patients with pure GGO of 15 mm or less, or metastatic lung tumors or lung tumors that anatomically required segmentectomy.

We defined two groups using the following criteria; the criteria for normal lung function group were %VC ≥80, %FEV ≥70 with and without chronic obstructive pulmonary disease (COPD) or interstitial pneumonia (IP) patterns; and the criteria for the low lung function group were %VC <80 or %FEV <70 with/without COPD or IP patterns. This threshold was chosen because a 10% threshold corresponds to Global Initiative for Chronic Obstructive Lung Disease (GOLD) stage II or worse in patients with isolated COPD. Emphysema was defined as hyperlucent area of lung that lacked a distinct wall. Interstitial pneumonia (IP) was classified to 7th criteria with pathological pattern according to the American Thoracic Society (ATS) and European Respiratory Society (ERS).

Pain management included non-steroidal anti-inflammatory drugs, acetaminophen infusion, epidural anesthesia, or subcutaneous morphine patient-controlled analgesia in the postoperative period. The pain was controlled to a score of 0–2 on the Numerical Rating Scale. 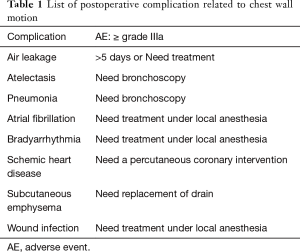 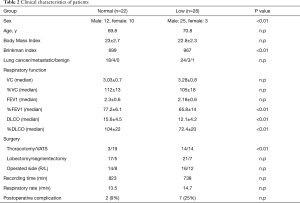 Sensor twisting and tension problems due to body movement over short terms were observed but there was no affected to analysis of respiratory and peak value.

The average measurement time was 762 minutes and there were no complications with the stretchable sensor. The mean respiratory rate was 13.9/min. There was no significant difference between the normal group (13.5/min) and the low lung function group (14.5/min). 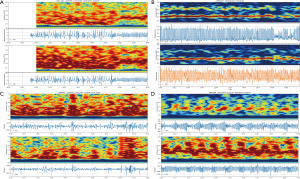 In the analysis of this study, regarding the overall peak value, the peak value of operated side was 0.195±0.05 and 0.18±0.06 in non-operated side, there was no significant different overall envelope peak value.

There was no significant different peak value in surgical approach, procedure relation to operated side and non-operated side. 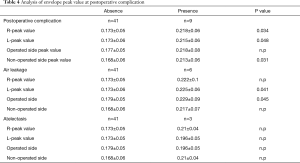 Stretchable sensors have several applications and advantages (12-15). The sensor is made of CNT-based, stretchable, and durable material. It is small and lightweight and mounted with a seal; easy measurement is possible at any point. Based on the pilot study (data not shown), data were collected by measuring the respiratory waveform across the 6th and 9th ribs. The measurement began at the end of the surgery and lasted for more than 8 hours. The sensor could not measure for periods of time due to slacking or twisting of the sensor but data were collected as planned.

Several studies have evaluated respiratory sensors that measure laser position (16), entire thorax movement (17), and end-tidal CO2 (18). However, these are difficult methods to evaluate the respiratory pattern in clinical practice. Their sensitivity is poor in abdominal breathing, tachypnea, and superficial breathing. The problems also include facilities and man power as they lack versatility for clinical applications.

In the field of rehabilitation, the respiratory state is measured by the range of motion of the rib cage using a tape measure. This is a method for evaluating the difference in thoracic dilatation; it appears to represent lung and thoracic compliance and respiratory muscle movement. However, chest movements in a few cases are not consistent in the procedure and location using the tape measurement; however, the CNT sensor could assess the left and right chest walls separately and confirm the precise respiratory movements.

In the present study, we were able to measure respiratory waveforms in all patients and demonstrate characteristic waveforms in those in the low lung function group using FFT and high postoperative complication rate in those with high peak values using frequency analysis. The importance of measuring peak values is a new finding in this study. Furthermore, the increase in peak value in the complication group is thought to be due to the marked disturbance and discontinue of respiratory amplitude due to hypokinesia of the chest wall.

An important factor of our stretchable sensor is the ease of handling and high reproducibility. We measured the respiratory state preoperatively, which helped acquire the breathing pattern without noise. Therefore, abnormal respiratory patterns can be detected by creating and recognizing basic respiratory patterns.

In clinical practice, several healthcare professionals are involved in providing treatment. An alert function in such a sensor is promising in detecting deviations in the respiratory pattern. It can enable more universal observations of severe cases, which may support healthcare professionals with all levels of experience in providing postoperative care. Additionally, accumulation of data from actual patients is expected to expand the utility of this sensor to other areas, such as rehabilitation, evaluation of COPD, and respiratory evaluation of patients in the intensive care unit.

Identification of a pattern is important for clinical applications. In the future, we plan to analyze the wavelet and autocorrelation function method in addition to FFT.

This study has several limitations. First, it involved a small number of patients with measurements performed only postoperatively from a single institution. Future collaborative research using larger sample sizes would help in obtaining accurate sensor measurements. Second, measurements were removed during noise, including during coughing and body movements and slacking or twisting of the sensor. Fourth, the effect of epidural anesthesia on chest wall movement has not been analyzed due to the small number of cases; therefore, the data may not represent the true respiratory patterns. Third, patient bias may be present in this feasibility study.

Reporting Checklist: The authors have completed the MDAR checklist. Available at http://dx.doi.org/10.21037/jtd-21-156

Conflicts of Interest: All authors have completed the ICMJE uniform disclosure form (available at http://dx.doi.org/10.21037/jtd-21-156). The authors have no conflicts of interest to declare.

Ethical Statement: The authors are accountable for all aspects of the work in ensuring that questions related to the accuracy or integrity of any part of the work are appropriately investigated and resolved. This study was approved by the ethics committee of Tokyo Medical and Dental University (M2017-255), and informed consent was obtained from all patients. The study was conducted in accordance with the Declaration of Helsinki (as revised in 2013).