Postoperative nausea and vomiting (PONV) are costly and burdensome to both hospitals and patients worldwide (1). Many studies on risk scoring and guidelines for PONV have been published (2-7). The risk factors of PONV can be classified into three categories: patients, anesthesia, and surgery (2). Female sex, non-smoking status, history of PONV, motion sickness, young age, history of motion sickness, and postoperative opioid use were identified as patient characteristics that are risk factors for PONV (2,3,8-10). Duration of anesthesia, use of opioids, inhalation anesthesia, no antiemetic prophylaxis, surgery over 60 min, gynecological surgery, laparoscopic surgery, and cholecystectomy have been identified as surgical and anesthetic risk factors of PONV (2-4,9,10).

Thoracoscopic pulmonary wedge resection (TPWR) is a surgical procedure that can preserve lung function and is less physically invasive to a patient than lobectomy. However, the risk factors of PONV following TPWR remain unclear. To our knowledge, this investigation is the first literature to evaluate multiple risk factors for PONV after TPWR. We also evaluated the impact of PONV on postoperative outcomes. Subsequently, we examined the pitfalls of anesthetic use in actual clinical practice.

We have completed the Strengthening the Reporting of Observational Studies in Epidemiology guideline checklist.

We present the following article in accordance with the STROBE reporting checklist (available at http://dx.doi.org/10.21037/jtd-21-296).

This study retrospectively reviewed the data of 220 consecutive patients who underwent TPWR at our institution between October 2017 and March 2020. Finally, we evaluated the TPWR procedures for malignant pulmonary tumors. The exclusion criteria were patients who underwent a thoracotomy, had benign tumors, and had incomplete data (Figure 1). 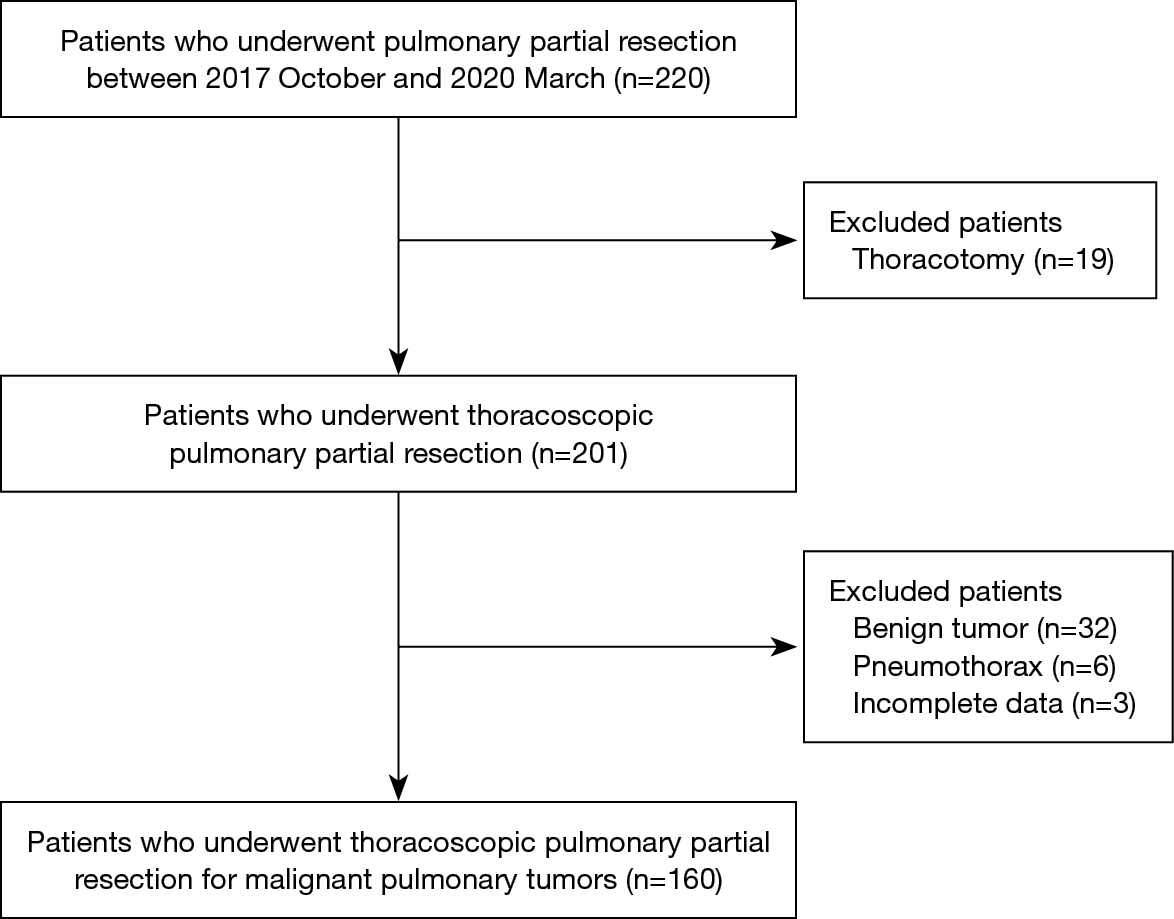 The study was conducted in accordance with the Declaration of Helsinki (as revised in 2013). The study was approved by the Review Board of Aichi Cancer Center (approval number: 2020-1-419) and informed consent was taken from all the patients.

We performed operations using staplers via a 3- or 4-port approach without rib spreading or direct visualization. Surgeons used staplers in TPWR. Lymph node dissections were not performed in all patients. Surgeons performed intercostal nerve blocks from the thoracic cavity using 0.25–0.375% ropivacaine instead of epidural anesthesia. Anesthesiologists routinely used fentanyl as an opioid. Patients at our institution receive 100 µg of fentanyl at induction. Additional fentanyl was intermittently administrated with 50 or 100 µg. However, there was no uniform protocol for the interval of added fentanyl, use of inhalation anesthesia, steroid, antiemetic drugs, or intraoperative infusion, and this was determined according to the anesthesiologist’s preference. Sevoflurane was used for inhalation anesthesia, propofol was used for intravenous anesthesia. Premedication was not performed in all patients.

We collected the following patient data: age, sex, body mass index, smoking index, history of cancer chemotherapy, plasma creatinine, and spirometry test results. Smoking index was calculated as follows: cigarettes per day × years of smoking. We could not review the history of PONV or motion sickness; female non-smokers were evaluated as predictive risk factors according to the Apfel score (2). We also evaluated polypharmacy as a risk factor (total number of drugs ≥6), because drugs are included in the health condition component and are related to the body function and structure, activity, and participation components (11). The operative outcomes included operative time and surgical blood loss. Anesthetic parameters were as follows: dose of fentanyl per kg per hour, remifentanil, dexamethasone, droperidol, ketamine acid, prochlorperazine maleate, inhalation anesthesia (including temporary usage), and intraoperative infusion index (IOII). The IOII was calculated as follows: [amount of infusion (mL) – intraoperative total output (mL)]/[operative time (hour) × body weight (kg)] (12). We had developed the protocol of early postoperative mobilization and chest drain removal within 4 hours after the operation since January 2017 (13). We evaluated the impact of PONV on postoperative mobilization within 4 hours after surgery, and postoperative hospitalization.

PONV was determined when awakening from anesthesia. The surgery team and nursing staff evaluated PONV every hour for 6 hours after surgery and every 3 hours until the next morning after 6 hours. Antiemetics were administered at the patient's wishes or at the time of vomiting by the judgments of medical staff.

Statistical analysis was performed using SPSS version 21.0 software (IBM Corp., Armonk, NY, USA). A two-sided P value <0.05 was considered statistically significant. We assessed the differences in the clinical and perioperative parameters between the PONV (P group) and non-PONV (N group) groups. The values are expressed as median ± standard deviation (SD) with interquartile range. The quantitative continuous variables were compared using the Mann-Whitney U test. The χ2 and Fisher’s exact tests were used to compare categorical variables. Parameters with P<0.1 in the univariate analysis were selected for inclusion in the multivariable logistic regression analysis.

Sixty patients were excluded due to the following: 19 patients underwent thoracotomies, 32 patients had benign tumors, 6 patients had a pneumothorax, and 3 patients had incomplete data. Finally, 160 patients were reviewed. A total of 27 patients (16.9%) were in the P group, and 133 patients (83.1%) were in the N group (Figure 1). Sixteen (59.3%) of the 27 patients in the P group required postoperative antiemetics. The median duration from cancer chemotherapy to surgery was 17.5±34.5 months (range 0–169 months). Thirty-two patients (20%) had polypharmacy. In this study, there was no patient with severe comorbidities, such as chronic heart failure, chronic kidney disease requiring dialysis, or liver cirrhosis of Child-Pugh Class B or higher. Four patients (2.5%) had postoperative complications. Class I complications according to the Clavien-Dindo classification were as follows: prolonged air leakage (drainage period of ≥7 days) in 2 patients, both of whom needed reinsertion of chest drains for air leakage on 2 postoperative day (POD), and cerebral infarction on POD1 in 1 patient (14). Class IIIb complications included subglottic laryngitis requiring emergent tracheostomy on POD2 in 1 patient. None of the patients required conversion to a thoracotomy, readmission, or had a 90-day postoperative mortality.

Tables 1 and 2 summarizes the results of the univariate analysis. Less smoking and an increased dose of fentanyl were related to PONV (P=0.046 and 0.007, respectively). Although female non-smokers, and lower plasma creatinine levels were not statistical risk factors of PONV, they tended to be associated with PONV (P=0.075 and 0.055, respectively). History of cancer chemotherapy, history of cancer chemotherapy within 6 months before surgery, and polypharmacy were not risk factors of PONV (P=0.153, 0.538, and 0.46, respectively). Other perioperative parameters were also not risk factors of PONV. In this study, none of the antiemetic prophylaxis administered was effective in preventing PONV. Statistically, PONV did not affect failure of early mobilization; however, failed mobilization was associated with PONV requiring postoperative antiemetics [successful mobilization vs. failed mobilization: 8% (n=11 of 138) vs. 22.7% (n=5 of 22); P=0.048]. PONV and PONV requiring postoperative antiemetics were not associated with postoperative hospitalization (P=0.221 and 0.810, respectively). 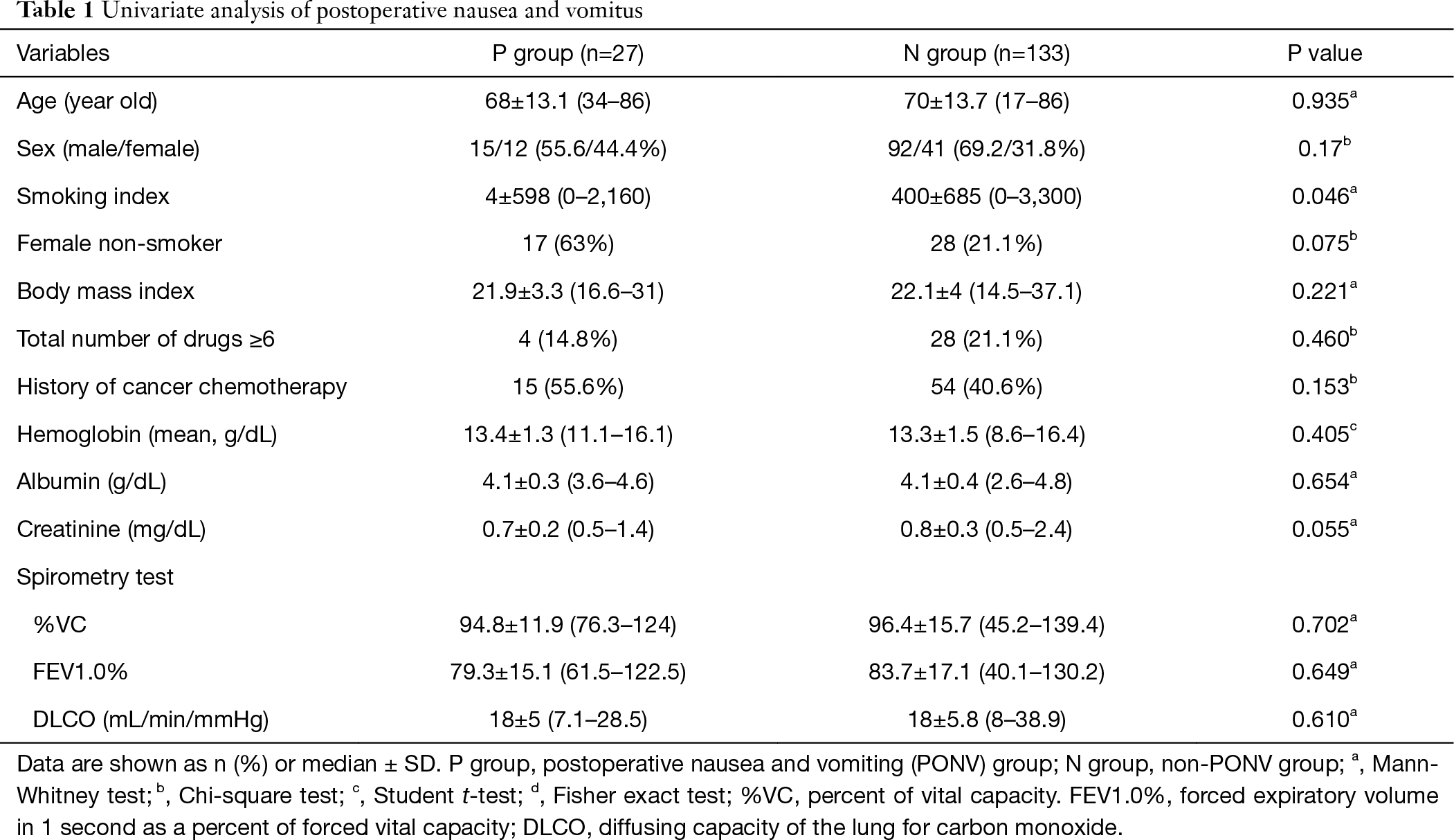 In the multivariate analysis, the dose of fentanyl was an independent risk factor of PONV (P=0.022) (Table 3). To assess the dose of fentanyl (µg)/kg/h, we conducted a receiver operating characteristic (ROC) curve analysis to determine the optimal cut-off value for this parameter. According to the area under the ROC curve, the optimal cut-off value for predicting PONV was 3.58 µg/kg/hr (area under the curve =0.665; sensitivity =85.2%; specificity =53.4%; 95% confidence interval: 0.562–0.768; P=0.007) (Figure 2). For example, in a 50 kg patient who underwent a 70-min operation (our median operative time), the total dose of fentanyl within 208 µg was the cut-off value for preventing PONV. 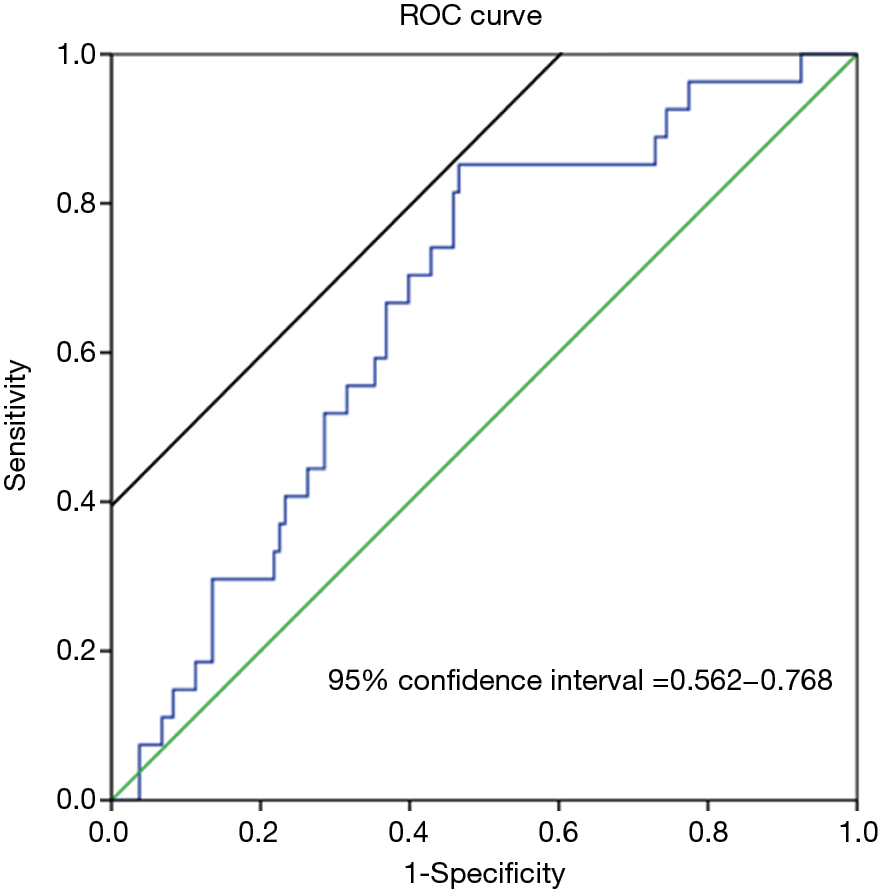 The predictive risk factors of postoperative nausea and vomiting (PONV) following thoracoscopic pulmonary wedge resection (TPWR) remain unclear. Approximately twenty years ago, PONV was observed in 30%, and it is up to 70% in high-risk patients undergoing general anesthesia (15). In recent reports, the overall incidence of PONV was 13–26% (8,16,17). PONV can cause delayed recovery and life-threatening complications such as hospital-acquired pneumonia and thromboembolic events (18). More recent studies have described the effectiveness of preventing PONV; however, this is difficult to clarify in further detail during lung surgery (6,7). In this literature, we could detect the risk factor of PONV after TPWR and the impact of PONV on postoperative outcomes. TPRW is a less invasive surgery performed to preserve physical function and often accomplished within a shorter anesthetic period than general thoracic surgery. However, in this study, 16.9% of patients had PONV in total, and a failed first mobilization was associated with PONV requiring postoperative antiemetics (P=0.048). PONV was associated with poorer outcomes.

The risk factors for PONV have been previously reported (2,3,8-10). This article is the first investigation to evaluate multiple risk factors of PONV, including history of cancer chemotherapy and polypharmacy following TPWR. However, history of cancer chemotherapy and polypharmacy were not risk factors of PONV. On the univariate analysis, less smoking and a higher dose of fentanyl was associated with PONV (P=0.046 and 0.007, respectively). These outcomes could be risk factors of PONV, similar to previous reports. Female non-smokers, and lower plasma creatinine levels tended to be associated with PONV (P=0.075 and 0.055, respectively). We considered that lower plasma creatinine level may depend on less muscle mass. Due to the slight difference, it had little clinical significance. Finally, on the multivariate analysis, the dose of fentanyl was the strongest risk factor for PONV following TPWR (P=0.022).

In this study, there was no protocol for antiemetic prophylaxis. Prochlorperazine maleate was more frequently used as an antiemetic prophylaxis, but none of the antiemetic prophylaxis administered was significantly effective in preventing PONV. For each antiemetic, a small number of patients had to be evaluated, which resulted in an inadequate evaluation of the antiemetic. In a clinical trial, midazolam was found to reduce the incidence of nausea to 6% and the incidence of vomiting, compared with a 21% incidence of PONV with ondansetron (24). Considering that antiemetics with a sedative effect increases the risk of failure in our early mobilization protocol, we could not include this into our protocol. Dexamethasone was recommended as an antiemetic, but this is also not covered by insurance in some countries (5,18). There is a gap between the current guidelines and clinical practice. However, in the future, permission for its conditional use in high-risk patients should be considered.

This study has several limitations. First, this investigation was a retrospective observation in a single facility, and the generalizability of the findings is limited. We could not obtain information about alcohol. Second, there was no protocol for anesthesia, and anesthetic management was varied compared with a well-planned prospective study. Risk assessment for PONV and use of antiemetics were varied on each anesthesiologist, which may make it difficult to accurately determine the effectiveness of antiemetics. It is therefore possible that the inevitable bias associated with the study design may have affected our analysis. Third, because our facility is a cancer hospital and benign diseases are minor, we analyzed without benign diseases in this study. Further prospective studies with more accurate data are necessary to confirm our findings.

An increased dose of fentanyl/kg/h was the strongest risk factor for PONV during TPWR. The optimal cut-off value for PONV was 3.58 µg/kg/hr. It is important to avoid the inadvertent administration of intraoperative fentanyl.

The authors would like to thank Editage () for English language editing.

Reporting Checklist: The authors have completed the STROBE reporting checklist. Available at http://dx.doi.org/10.21037/jtd-21-296

Conflicts of Interest: All authors have completed the ICMJE uniform disclosure form (available at http://dx.doi.org/10.21037/jtd-21-296). The authors have no conflicts of interest to declare.

Ethical Statement: The authors are accountable for all aspects of the work in ensuring that questions related to the accuracy or integrity of any part of the work are appropriately investigated and resolved. The study was conducted in accordance with the Declaration of Helsinki (as revised in 2013). The study was approved by the Review Board of Aichi Cancer Center (approval number: 2020-1-419) and informed consent was taken from all the patients.