Superior sulcus tumors, or Pancoast tumors, are a rare subset of lung carcinomas, accounting for less than 5% of all non-small-cell lung cancers (NSCLCs) (1). They are locally advanced T3 or T4 tumors (2) that often pose many treatment-related challenges due to their unique anatomical location and potential involvement of adjacent structures such as the apical chest wall, vertebral column, brachial plexus, and subclavian vessels (1).

Over the past several decades, management has drastically improved due to improvement in surgical techniques, incorporation of new drugs, and the quality of radiation delivery. The current standard of care is induction chemoradiotherapy followed by radical surgical resection, which was shown to have markedly improved rates of complete resection and local control of disease (1). In addition to a few prospective trials (3-5), there have also been multiple retrospective series of patients treated with trimodality treatment for Pancoast tumors since the early 1990s (6-11). Reviewing the treatment strategies and outcomes of patients with Pancoast tumors in the province of British Columbia (BC) will add valuable information to this limited knowledge base.

We present the following article in accordance with the STROBE reporting checklist (available at http://dx.doi.org/10.21037/jtd-21-380).

The study was conducted in accordance with the Declaration of Helsinki (as revised in 2013). The study was approved by the BC Cancer and University of British Columbia Research Ethics Board (No.: H18-01616) and individual consent for this retrospective analysis was waived. We defined Pancoast tumor as NSCLC of the apical segment of the upper lung lobe that involve structures of the apical chest wall (12), including the thoracic inlet, first two ribs, and/or brachial plexus. Our main outcomes were overall survival and disease-free survival. All patients who were treated for NSCLC between January 1, 2000 and December 31, 2015 in BC (population of approximately 4 to 5 million during this time period) were reviewed. Out of 1,373 patients with upper lobe tumors, 329 patients were identified as having primary tumors located in the superior sulcus, but they had various stages and presentations. Eighty-four patients were excluded as they received palliative treatments, and 80 patients were excluded as they had definitive chemoradiotherapy only. Another 108 patients were excluded as they had upfront surgery with adjuvant therapy. Fifty-seven patients were selected for trimodality therapy with curative intent, but 25 were found to be surgically inoperable after induction chemoradiation. The remaining 32 patients with Pancoast tumors completed trimodality treatment.

Induction chemoradiotherapy included 2 cycles of platinum-etoposide chemotherapy concurrently with radiotherapy. Surgery was planned for 2 months after completion of radiation. Surgical approach was decided by the operating surgeon according to the location and morphology of the tumor.

To adjust for the potential of confounding factors when looking at the association between pathological response and survival, Cox proportional hazards modeling was used to account for age, gender, clinical stage, and histology. Due to a small sample size, no more than three variables were entered into each model, including pathological response plus two potential confounding factors. Hazard ratios and 95% confidence intervals were reported.

Thirty (94%) of the primary lung resections were lobectomies and 2 (6%) were wedge resections. Chest wall resection was performed in 20 (63%) patients. Complete resection was achieved in 31 patients (97%). Table 2 shows the summary of treatment regimen. 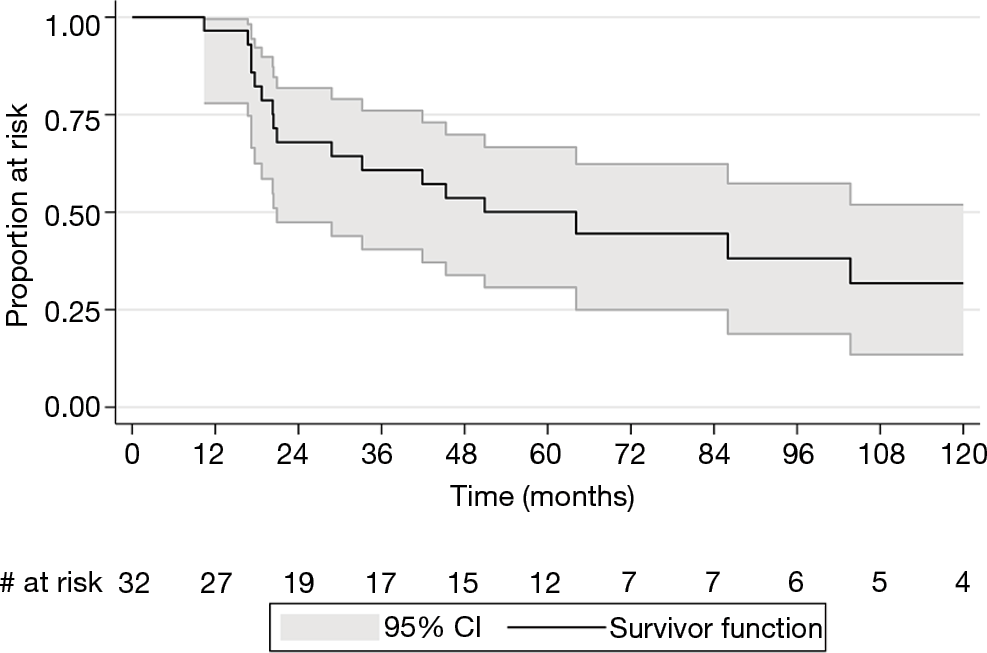 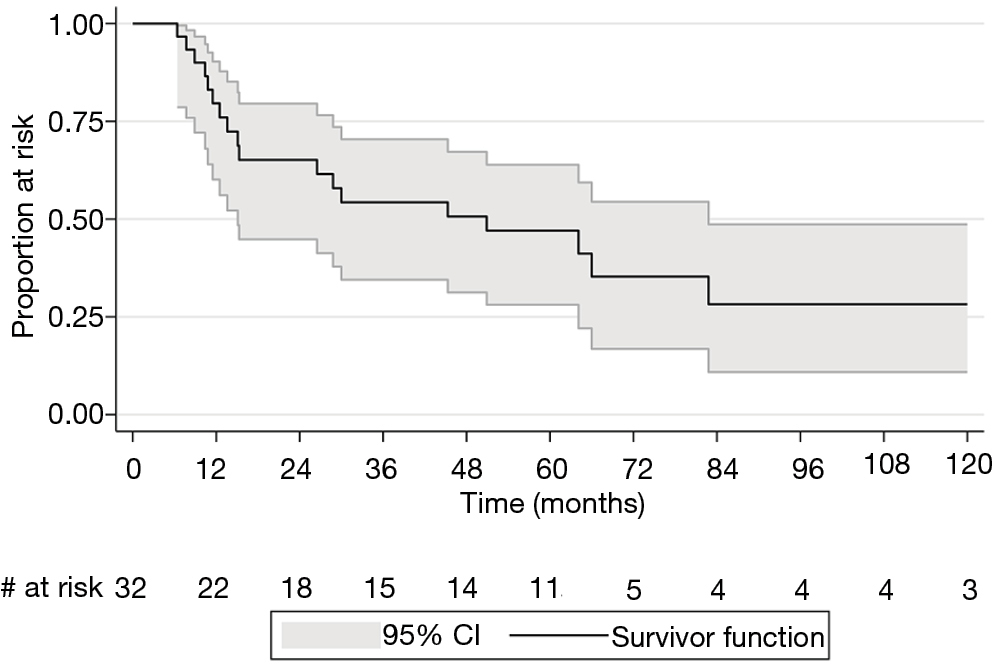 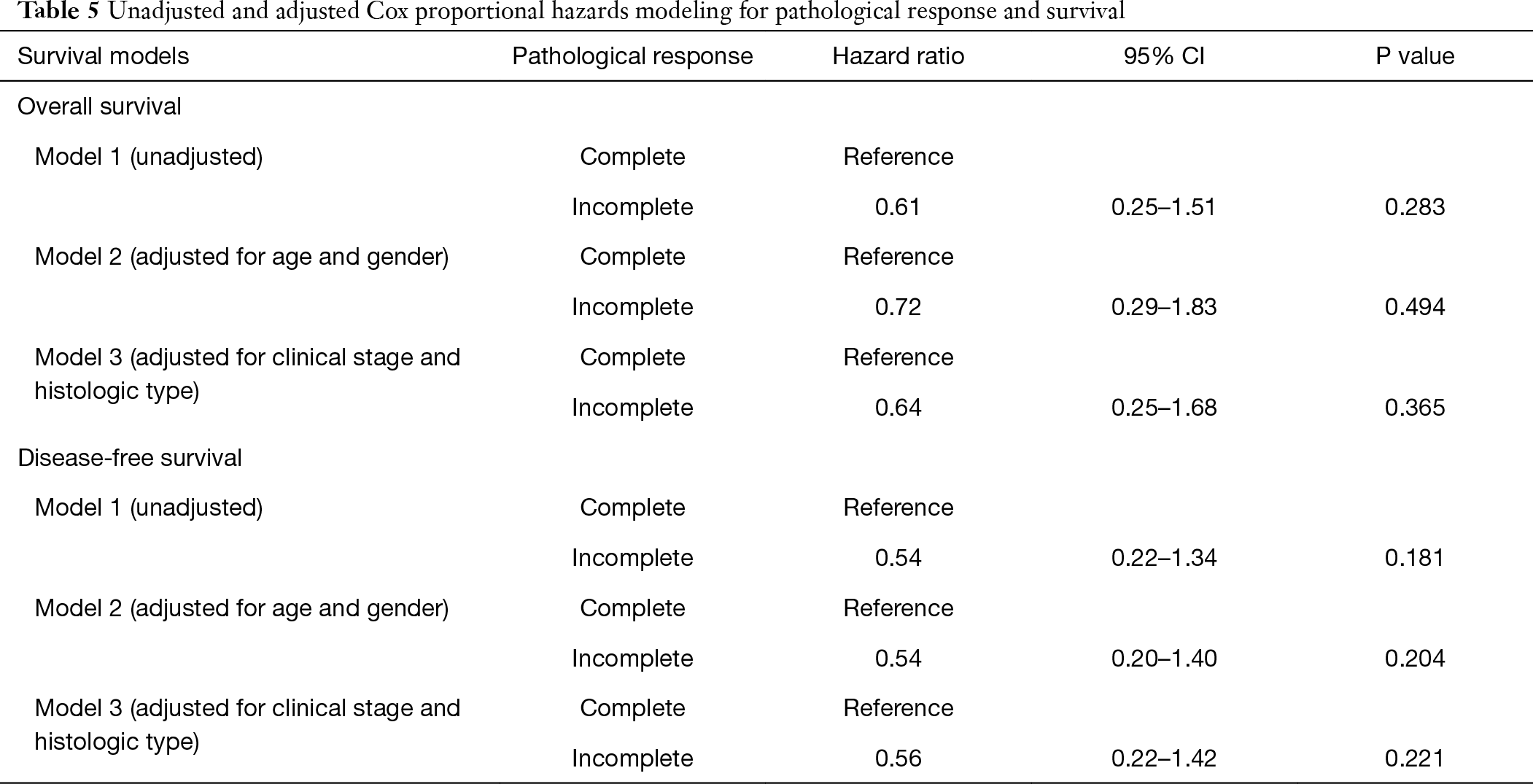 The landmark Southwest Oncology Group (SWOG) Trial 9416 was a multi-center phase II trial that demonstrated the feasibility and effectiveness of trimodality treatment (3). It was found that radiation plus surgery yielded a 50% rate of complete resection and a 30% 5-year overall survival rate, which increased to a 76% rate of complete resection and a 44% 5-year overall survival rate with chemoradiotherapy plus surgery. The variability of induction chemoradiotherapy protocols between different institutions makes it difficult to properly compare patient outcomes, but the SWOG offered a reasonable regimen that consisted of (I) concurrent thoracic radiotherapy (45 Gy) and 2 cycles of cisplatin and etoposide, (II) thoracotomy three to five weeks after completion of chemoradiotherapy given no evidence of distant metastases or local progression, and (III) two additional postoperative courses of chemotherapy with a platinum-based doublet. For patients with locally advanced, unresectable disease, as well as those who were medically inoperable, definitive chemoradiotherapy was recommended (3). 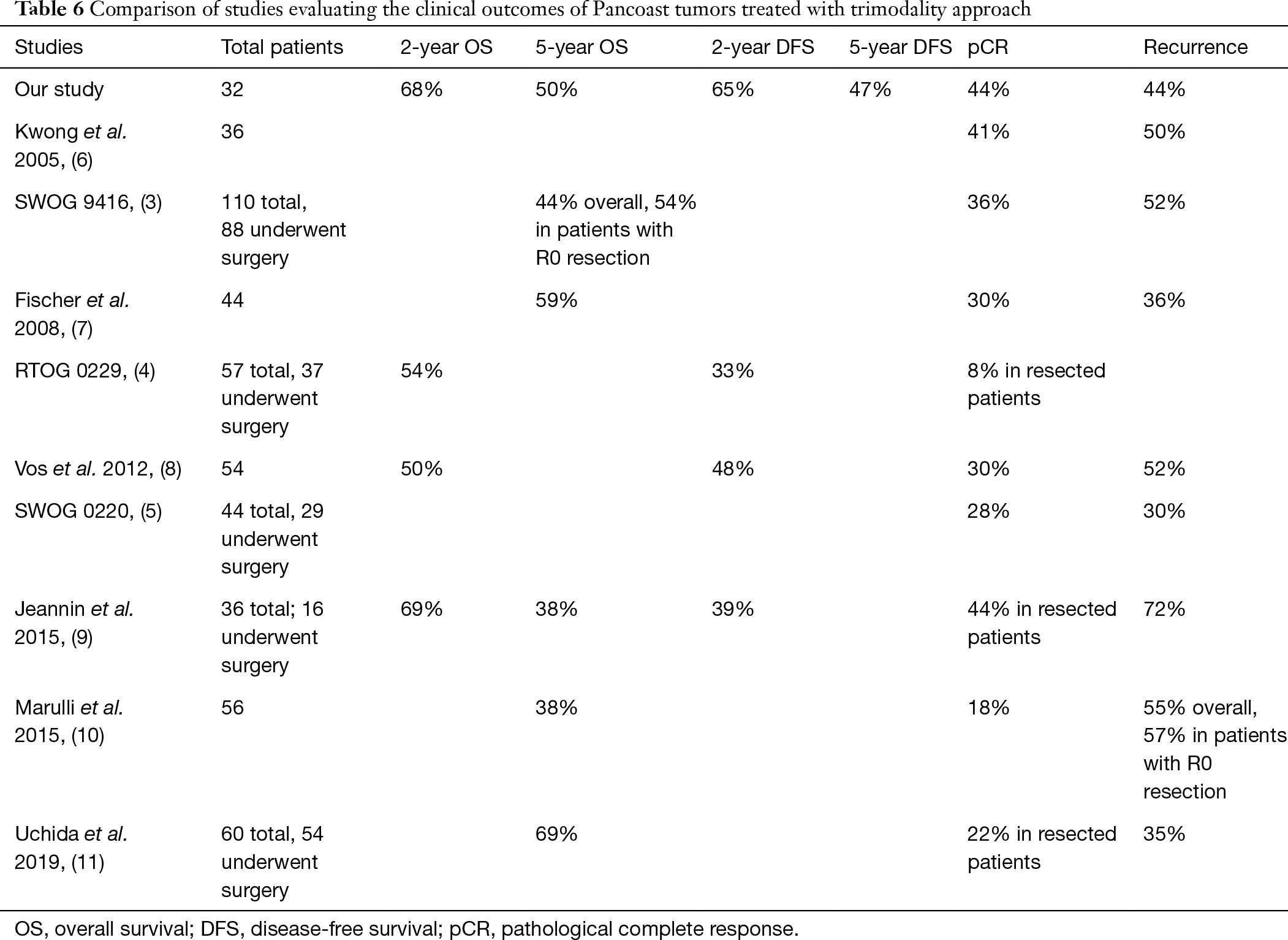 Disease-free survival and pattern of recurrence

While long-term survival and local control of disease from trimodality treatment have improved greatly over the last few decades, systemic control remains poor, with distant relapse (usually the brain) being the most common cause of death. Table 6 summarizes and compares disease-free survival and recurrence rates in previous trimodality studies. It has been well-documented that stage III NSCLCs have the highest risk of developing brain metastasis, with an incidence of approximately 30% (13).

We report a 2-year disease-free survival rate of 65.1%, which was higher than previous studies (4,8,9). This could again be explained by differences in chemotherapy regimen and lower radiotherapy doses. Uchida et al. reported the lowest recurrence rate of 35.2% (11); again, we wonder if this is because their MVP chemotherapy regimen was more effective in preoperative downstaging. Fischer et al. reported a low 36% disease relapse rate, which was distant in 25% (7). Jeannin et al. reported a 1- and 2-year disease-free survival rate of 53.6% and 39.1% respectively in all patients including those who were unresectable (9). Recurrences were found in 72% of their patients, which was the highest of the studies reviewed. It should be noted that this study only looked at a very small sample of 16 trimodality patients, and the unresectable patients likely had more advanced disease.

Forty-four percent of our patients experienced disease relapse, which is comparable to the values found in the literature. Our number of recurrences was too small to allow for meaningful comparisons between T3 and T4 tumors. All the studies we reviewed reported that the brain was the most common site of recurrent disease, the only exception being Fischer et al. which reported a tie of highest number of distant metastasis in the contralateral lung (7).

Downstaging of nodal status is an important role of induction chemoradiotherapy. Positive N2 lymph nodes occur in approximately 20% of Pancoast tumor cases and are particularly associated with poor prognosis, with many studies reporting outcomes that were clearly inferior to those of patients with N0/N1 only (15). The RTOG 0229 trial found clearance of all nodal disease to significantly improve overall survival as well as disease-free survival (4). Our study showed comparable treatment outcomes for patients of all nodal statuses. Ultimately, we report successful nodal downstaging in all our 8 node-positive patients, all of whom were found to have pN0 status at the time of surgery. Indeed, all our patients were found to be at most pN1 at the time of surgery, which supports the effectiveness of our induction chemoradiotherapy regimen. One cT3N0 patient was found to have a pT1N1 tumor, though in this case the patient had several delays with their chemotherapy regimen because of a complication of periorbital cellulitis that took several weeks to resolve. There is still controversy surrounding the effectiveness of the trimodality approach in patients with existing lymph node metastasis (6,16). Aggressive surgical treatment is still highly recommended even in N2 disease to prevent the onset of therapy-resistant pain due to involvement of the brachial plexus (8).

This study offers the advantage of being based out of a single provincial institution. BC Cancer is a provincial program that consists of multiple cancer centers, and as such our cohort underwent a mostly homogenous therapeutic approach. Due to the scarcity of Pancoast tumors that were eligible for trimodality treatment, we ended up with a relatively small sample size which led to low statistical power. Despite this, our sample size was still comparable to those of previous retrospective studies.

Our study confirms that nodal downstaging and complete surgical resection with negative margins can be achieved after induction chemoradiotherapy, and curative-intent trimodality treatment can lead to long-term survival in some patients. We did not demonstrate any prognostic value of pathological complete response, likely due to small sample size. Distant metastasis continues to be a major downfall after trimodality therapy. Further exploration on long-term prognostic and predictive variables is needed to add to the limited knowledge base of Pancoast tumors. Moreover, an optimal standardized treatment regimen has yet to be established. Advances in imaging, radiotherapy, and surgical techniques will likely improve patient outcomes.

Reporting Checklist: The authors have completed the STROBE reporting checklist. Available at http://dx.doi.org/10.21037/jtd-21-380

Conflicts of Interest: All authors have completed the ICMJE uniform disclosure form (available at http://dx.doi.org/10.21037/jtd-21-380). The authors have no conflicts of interest to declare.

Ethical Statement: The authors are accountable for all aspects of the work in ensuring that questions related to the accuracy or integrity of any part of the work are appropriately investigated and resolved. The study was conducted in accordance with the Declaration of Helsinki (as revised in 2013). The study was approved by the BC Cancer and University of British Columbia Research Ethics Board (.: H18-01616) and individual consent for this retrospective analysis was waived.