Spontaneous rupture of the esophagus, first described by Boerhaave in 1724, is a life-threatening condition characterized by disruption of the distal esophagus due to barotrauma that results in contamination of the mediastinum and pleural cavity with gastric contents. Boerhaave’s syndrome has a high mortality rate (14–40%) due to respiratory failure, septic shock, and multiple organ failure (1-3). The barogenic nature of the rupture probably explains the wide mediastinal contamination, empyema, and pneumothorax that can cause respiratory failure, sepsis, and shock. Surgical treatment is the basis of therapy, but there is no established surgical procedure (1-3). In our emergency department, we performed primary repair with thoracotomy as a treatment for Boerhaave’s syndrome until 2004. In 2004, a patient developed respiratory failure and septic shock during thoracotomy and died. Therefore, since 2004, we changed from primary repair with thoracotomy to laparotomy and postoperative computed tomography (CT)-guided drainage, and all patients survived. However, mechanical ventilator days and the length of intensive care unit (ICU) stay remained prolonged. We added lavage and drainage using video-assisted thoracoscopic surgery (VATS) to primary repair with laparotomy in 2011. Since lavage and drainage using VATS can be performed while checking the contaminated site, more sufficient lavage and drainage is possible compared to CT-guided drainage. The purpose of this study was to elucidate the usefulness of lavage and drainage using VATS for Boerhaave’s syndrome.

We present the following article in accordance with the STROBE reporting checklist (available at http://dx.doi.org/10.21037/jtd-20-2445).

From April 2004 to September 2018, 18 patients with Boerhaave’s syndrome presented to our department. Figure 1 shows the study design. Six of the 18 patients were treated conservatively and were excluded from the analysis. These 6 patients were stable in respiratory and hemodynamic state, and were not in sepsis. 3 of 6 patients had limited contamination of mediastinum. Therefore, we had decided that conservative treatment was possible. We performed fasting, total parenteral nutrition, administration of antibiotics, nasogastric tube decompression, and chest tube drainage for these patients. All 6 patients improved and were discharged. Primary repair was performed with laparotomy in 12 patients. These patients were divided into two groups according to the drainage method for the mediastinal and thoracic cavities after laparotomy. From 2004 to 2011, CT-guided drainage was performed in 6 patients (D group). On the other hand, from 2011 to 2018, lavage and drainage were performed using VATS in 6 patients (VATS group). The medical records of the included patients were reviewed retrospectively for survival rate, anastomotic leakage, operation time, PaO2/FiO2 (P/F) ratio after surgery, ventilator-free days (VFDs), length of ICU stay, and length of hospital stay. 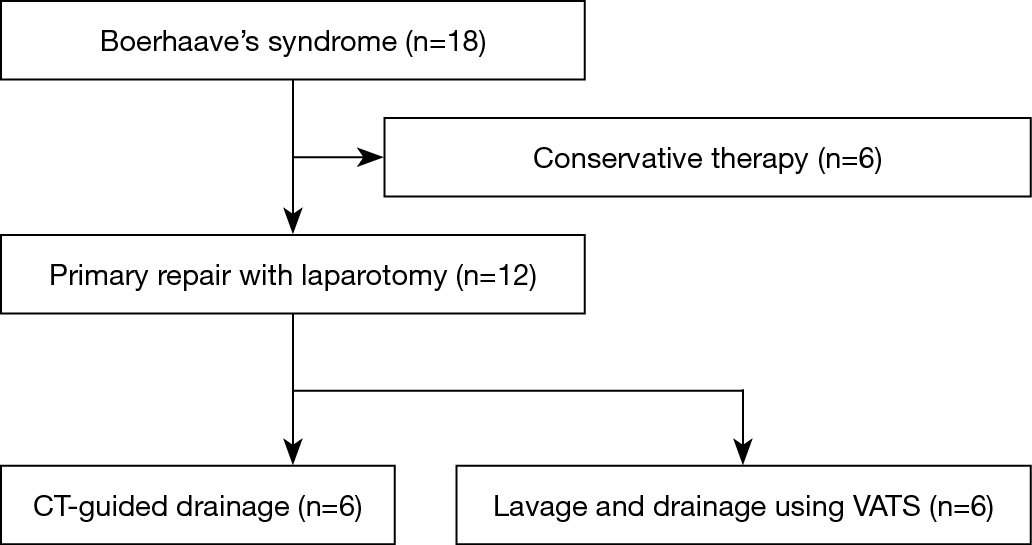 Figure 1 Flow chart of patients. Six of the 18 patients were treated conservatively and were excluded from the analysis. Primary repair was performed with laparotomy in 12 patients. These patients were divided into two groups according to the drainage method for the mediastinal and thoracic cavities after laparotomy. CT-guided drainage was performed in 6 patients (D group). On the other hand, lavage and drainage were performed using VATS in 6 patients (VATS group). VATS, video-assisted thoracoscopic surgery.

The transabdominal approach was used for rupture of the lower thoracic esophagus. In all cases, the perforation site was the left wall of the lower thoracic esophagus. Laparotomy was done with an upper midline incision. The left lateral segment of the liver was mobilized, and the lesser omentum was opened. The left crus of the diaphragm were dissected, and the lower thoracic esophagus could be encircled and the perforation site identified. The primary repair was done by an entire layer or 2-layer suturing with absorbable thread. A fundic patch or omental patch was considered for reinforcement of the sutured site. Gastrostomy to reduce gastrointestinal pressure and a feeding jejunostomy were performed. The drain was inserted into the mediastinum near the sutured site of the esophagus through the foramen of Winslow from the right flank.

After primary repair with laparotomy, the patient’s position was converted to the right decubitus position, and differential lung ventilation with a double-lumen endobronchial tube was performed. For VATS, a total of three trocars were inserted. First, the 10-mm camera port was introduced in the fifth intercostal space at the midaxillary line. Then, the two 5-mm ports were introduced in the third intercostal space at the anterior axillary line and the seventh intercostal space at the posterior axillary line. The purpose of the VATS was only lavage and drainage for the mediastinum and the thoracic cavity. Advanced surgical techniques such as primary suture were not required. If the contamination of the mediastinum and thoracic cavity were severe by food residue, a small thoracotomy and lavage with a large amount of saline were performed. Because it was difficult to remove food residue only by VATS. Two chest drainage tubes were inserted to the dorsal lung area and above the left diaphragm.

Data are reported as the medians [interquartile range (IQR)] or as proportions. All data were analyzed with SPSS version 21.0 software (SPSS, Inc., Chicago, IL, USA). Comparisons of the two groups were performed with the Mann-Whitney and Fisher’s exact tests for the variables of interest.

The study was conducted in accordance with the Declaration of Helsinki (as revised in 2013). This study was approved by the Kitasato University Ethics Committee (approval number B18-252). The committee waived the need for informed consent owing to the retrospective observational design of study.

Spontaneous esophageal rupture often causes respiratory failure and septic shock in the perioperative period. Primary repair with thoracotomy is most commonly performed as the surgical treatment, but it is an excessively invasive procedure and affects respiratory and circulatory status (1-3). In our emergency department, we changed the surgical approach from thoracotomy to laparotomy, because a patient developed respiratory failure and severe shock during thoracotomy and then died. Khan et al. (4) first reported a transabdominal approach for spontaneous rupture of the esophagus. They successfully managed four patients using this procedure. The advantages of primary repair with laparotomy are as follows. The reinforcement, such as a fundic patch or an omental patch, can be easily performed. Gastrostomy to reduce gastrointestinal pressure and feeding jejunostomy can also be performed. The effect on respiratory function is less than thoracotomy (5). The disadvantages of primary repair with laparotomy are as follows. Laparotomy is indicated only for rupture of the lower thoracic esophagus. Open or percutaneous drainage may be required for postoperative mediastinal abscess and empyema. The usefulness of CT-guided drainage for mediastinal abscess has often been reported. Gobien et al. (6) reported a series of 12 patients with mediastinal abscess, and six of them were successfully drained by CT-guided drainage. Recently, Arellano et al. (7) also reported that they performed CT-guided drainage for 23 patients with mediastinal abscess. Since the success rate was 95.6%, they concluded that it was a very useful method.

The advantages of lavage and drainage using VATS are as follows. It is a less invasive procedure than thoracotomy. We can sufficiently lavage and drain the thoracic cavity and mediastinum while checking the contaminated site. On the other hand, sufficient lavage and drainage cannot be performed with CT-guided drainage. Primary repair with thoracoscopic surgery requires a high level of surgical technique, whereas lavage and drainage using VATS can be performed relatively easily. The disadvantages of VATS are as follows. It requires conversion to the right decubitus position and differential lung ventilation after laparotomy, which affects respiratory and circulatory status. Since we perform VATS in addition to laparotomy, operation time becomes longer.

This study has several limitations. Boerhaave’s syndrome is rare, so only a small number of patients could be included in the present analysis. In this study, the percentages of anastomotic leakage were high. At this point, we haven’t found the cause of it. It is necessary to increase number of cases and investigate the cause of it in the future. In addition, it was a retrospective, historical study and not a randomized, controlled study. The surgical treatment for Boerhaave’s syndrome has not been established, then various surgical treatments have been performed at various centers. Especially, it depends on the surgeon’s surgical skill. Multicenter retrospective observational study is desired; however, it is difficult for these reasons.

Lavage and drainage using VATS compared with CT-guided drainage after esophageal repair with laparotomy extended VFDs and shortened the length of ICU stay. With VATS, sufficient lavage and drainage of the thoracic cavity and mediastinum can be achieved. VATS is an effective treatment method for Boerhaave’s syndrome.

We would like to thank Forte Science Communications (forte-science.co.jp) for English language editing.

Reporting Checklist: The authors have completed the STROBE reporting checklist. Available at http://dx.doi.org/10.21037/jtd-20-2445

Conflicts of Interest: All authors have completed the ICMJE uniform disclosure form (available at http://dx.doi.org/10.21037/jtd-20-2445). The authors have no conflicts of interest to declare.

Ethical Statement: The authors are accountable for all aspects of the work in ensuring that questions related to the accuracy or integrity of any part of the work are appropriately investigated and resolved. The study was conducted in accordance with the Declaration of Helsinki (as revised in 2013). This study was approved by the Kitasato University Ethics Committee (approval number B18-252). The committee waived the need for informed consent owing to the retrospective observational design of study.