Chronic obstructive pulmonary disease (COPD) is a major respiratory disease that is characterized by respiratory symptoms and airflow limitation. While COPD is considered preventable and treatable, it is a leading cause of death worldwide and imposes large social and economic burdens, especially in ageing societies. Excess health-care resource utilization, increased medical costs, and loss of productivity are also social problems. Based on the current situation, this review aimed to summarize the prevalence and underdiagnosis of COPD, government policies, clinical features distinct from those of other countries, adherence to inhaler therapy, and availability of pulmonary rehabilitation in Japan. We present the following article in accordance with the Narrative Review Reporting Checklist (available at https://dx.doi.org/10.21037/jtd-20-2263).

Prevalence of airflow limitation and underdiagnosis of COPD 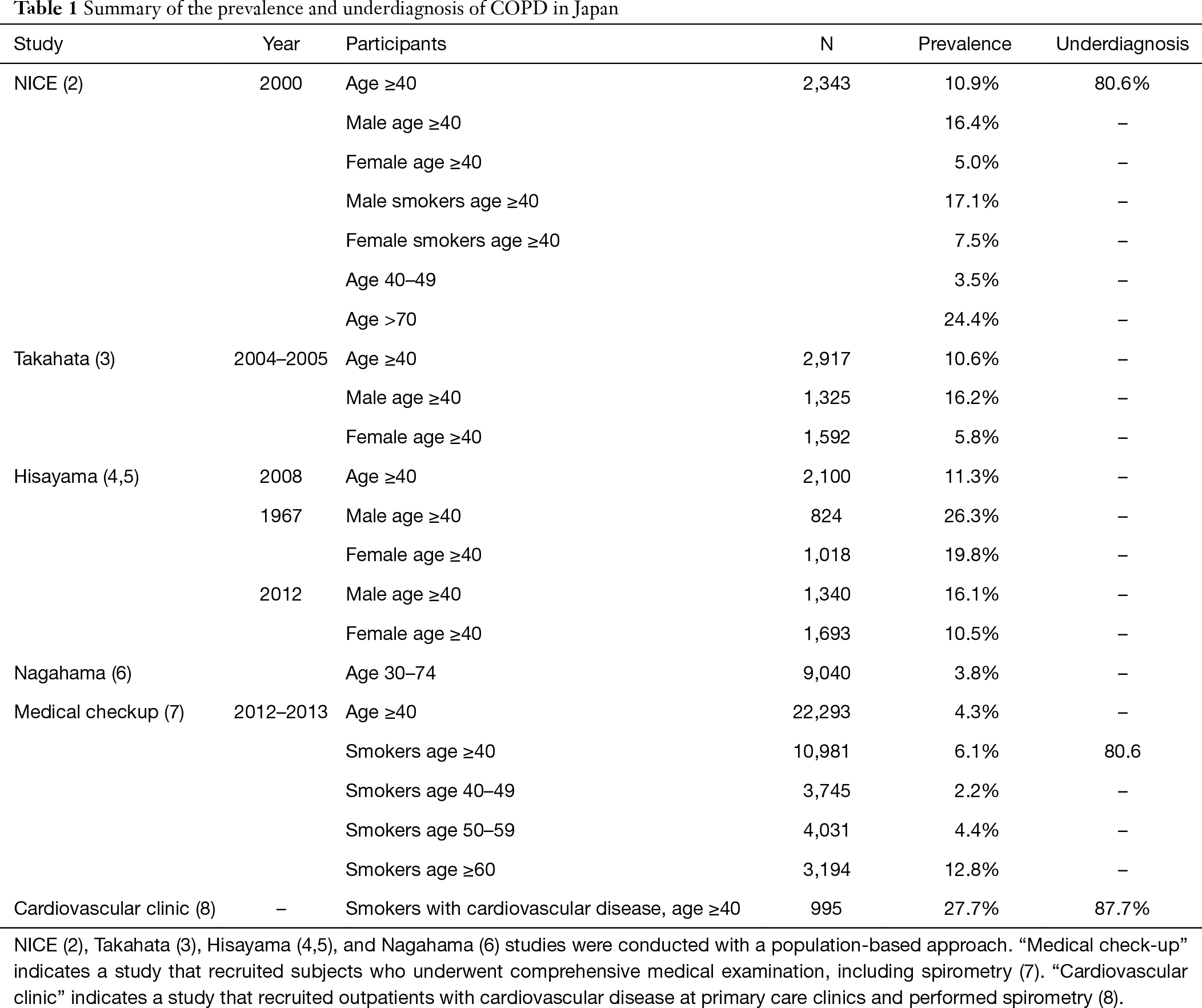 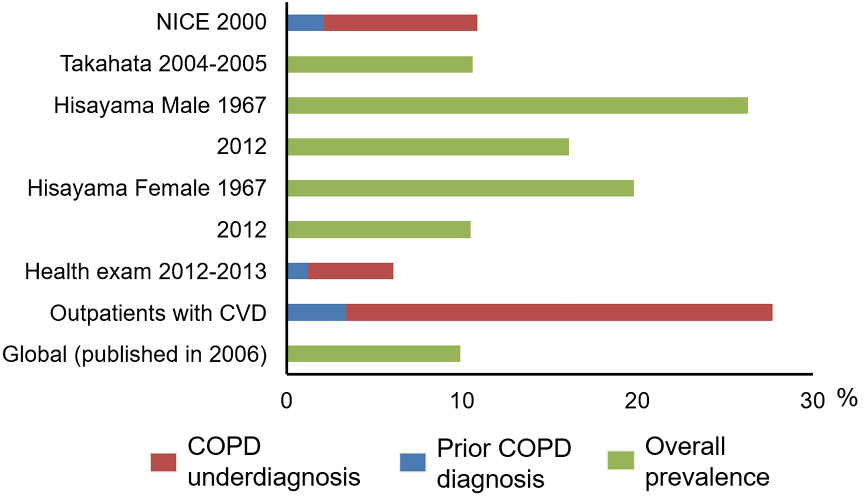 Figure 1 Prevalence and underdiagnosis of COPD in Japan. All data were based on subjects aged ≥40 years. NICE (2), Takahata (3), and Hisayama (5) were conducted with a population-based approach. “Health exam” indicates a study of subjects who underwent comprehensive medical examination including spirometry (7). “Outpatients with CVD” indicates a study of outpatients with cardiovascular disease (CVD) at primary care clinics and performed spirometry (8). “Global data” indicates a meta-analysis of 34 studies including subjects aged ≥40 years (1).

Studies have also shown the prevalence of airflow limitation in specific populations. In 995 patients aged ≥40 years who had a smoking history of ≥10 pack-years and were treated for cardiovascular disease at 17 medical centres in Japan, the prevalence of airflow limitation (FEV1/FEV6 <0.73 without bronchodilators) was 27%, and 87.7% of those patients had not previously been diagnosed with COPD (8). Additionally, in smokers aged ≥40 years who underwent comprehensive medical examinations, the prevalence of airflow limitation (FEV1/FVC <0.7 without bronchodilators) was 6.1%, and 80.6% had not been previously diagnosed with COPD/emphysema (7). Moreover, a combination of the International Primary Care Airways Group (IPAG) Questionnaire and spirometry showed that the prevalence of COPD (defined as FEV1/FVC <0.7 without bronchodilators) was 29% in former and current smokers aged 50 to 74 years old and 37% in those aged 75 years old or more in Ohmuta city in Japan, an area with high levels of air pollution (9). In that study, even 16% of non-smokers aged 50 years or more showed spirometric evidence of COPD. These results suggest that while the overall prevalence of COPD in the general population aged ≥40 years is approximately 10% in Japan, the prevalence may increase up to 30–40% in smokers with cardiovascular disease and those who lived in areas with high air pollution.

Due to improvements in environmental sanitation and medical care, the life span has increased in the past decades, but during the same period, morbidity due to noncommunicable diseases (NCDs) has imposed increasing substantial social burdens. The Japanese government proposed the National Health Promotion in the 21st century, termed “Health Japan 21 (the first term)”, in 2000 to prevent the occurrence of major NCDs, including cancer, heart disease, stroke, and diabetes (10). Moreover, the Japanese government enacted the Health Promotion Law to prevent non-smokers from being exposed to cigarette smoke in public facilities in 2003 and allowed for coverage of the smoking cessation programme in the Japanese medical insurance system in 2006.

COPD was not included in the Heath Japan 21 (the first term). However, the number of subjects who died from COPD has increased continuously (Figure 2), and many older patients with COPD develop a wide spectrum of comorbidities. The impairment in activities of daily living results in frailty and has been recognized as a social problem (11). In 2013, the Ministry of Health, Labour, and Welfare in Japan revised the Health Japan 21 (the second term) and added COPD to the list of target NCDs (12). One of the goals in the Health Japan 21 is to prevent the incidence and progression of NCDs, including cancer, cardiovascular disease, diabetes mellitus, and COPD. Specifically, the government is attempting to increase the recognition of COPD from 25% of the generation population in 2011 to 80% by 2022 and to promote further smoking cessation to prevent COPD. Unfortunately, the current awareness of COPD is still around 30% (13). 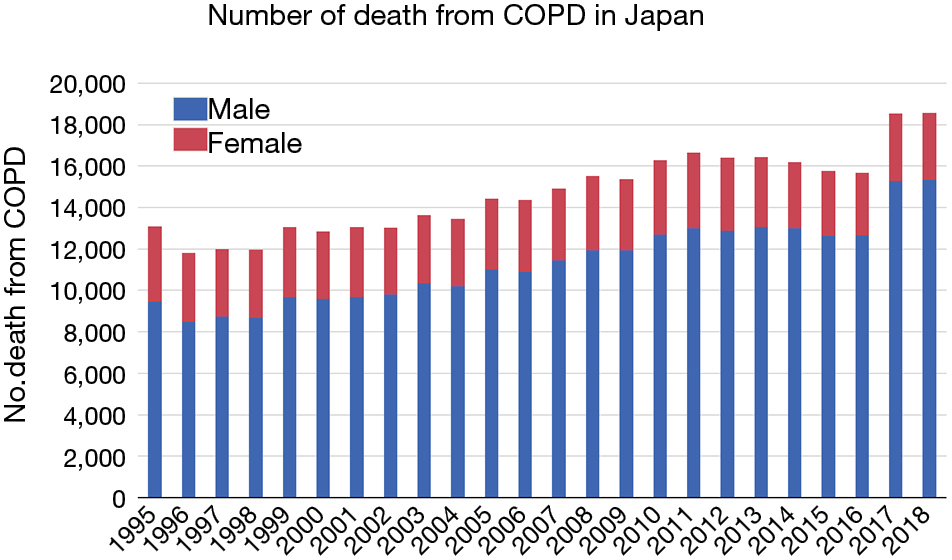 Figure 2 Trend in number of deaths from COPD in Japan. Data were obtained from the nationwide database of the Ministry of Health, Labour, and Welfare in Japan.

Another distinct feature of Japanese COPD is that patient-reported exacerbation rates are lower than those in other countries (17). In the UPLIFT trial that examined the effects of tiotropium in 30 countries, including Japan, the exacerbation rate in Japanese patients (0.61/person/year) was lower than that in patients from other Asian countries (0.92/person/year) and all countries (0.85/person/year). This difference was reflected by the 2017 GOLD ABCD classification in Japan and Spain and the United States, where groups C and D were less common in Japan than in Spain and the United States (18,19). Although the definite reasons for the different rates of exacerbations in Japan and other countries remain unclear, better medical access, less frequent cardiovascular comorbidity, and better adherence to inhaled medications as described below might contribute to less frequency of exacerbations in Japan (17,20). Additionally, as described in a previous review, there is the hypothesis that Japanese patients with COPD may tend to underreport their symptoms, which causes less frequency of reported exacerbations (17).

Moreover, the comorbidities of COPD are affected by multiple factors and vary among regions. In a review summarizing comorbidities in Japanese patients with COPD, cardiovascular disease and metabolic syndrome are less frequent and osteoporosis, lower body mass index (BMI), and malnutrition are more frequent in Japanese patients with COPD than in Westerners with COPD (20-22). The prevalence of osteoporosis was 18-39% and 9% in Japanese and Hungarian patients with COPD, respectively and the prevalence of diabetes was 7.8% in Japanese subjects with airflow limitation (FEV1/FVC <0.7 without bronchodilators) and 12% in Hungarian patients with COPD (20,22-24). These differences could be explained by genetic backgrounds and social and dietary behaviours. Nonetheless, we should also be aware that the prevalence of comorbidities may change in different samples. As shown in Figure 3, in observational studies conducted in a hospital, a cardiovascular disease accounts for approximately 12% of deaths in Japanese patients with COPD (diagnosed based on post-bronchodilator FEV1/FVC <0.7) (25,26). In contrast, a cardiovascular disease accounted for approximately 30% of all-cause deaths in the IMPACT study conducted worldwide (28). However, in a population-based study in Takahata, of 3,253 Japanese subjects enrolled, 338 showed airflow limitation without apparent respiratory symptoms (27). Notably, 31 patients with airflow limitation died during a 7-year follow-up, and the causes of death were respiratory failure (32%), cardiovascular disease (29%), lung cancer (16%), and other organ neoplasms (13%) (27). In terms of the annual rate of deaths related to COPD, the Takahata study suggests that the annual rate of death in patients with COPD should be 1–2%. Therefore, assuming that there are at least 6 million COPD patients in Japan, the number of annual deaths related to COPD would be approximately 60,000. However, this calculated number is more than the reported number (18,000) as shown in Figure 2. This discrepancy could be because underdiagnosis of COPD might have affected the number of reported deaths associated with COPD.

Figure 3 Causes of death in patients with COPD from Japanese and international studies. The Hokkaido COPD cohort (25) and Kyoto University cohort (26) were conducted at hospitals, and forced expiratory volume in 1 sec (FEV1) was approximately 60% (% predicted). The Takahata study (27) was a population-based study in which subjects with airflow limitation were included, but the severity of airflow limitation was mild (mean FEV1 was over 90% of predicted). IMPACT (28) was an international multicentre interventional study conducted in the United States, Europe, and Asia.

The use of ICSs and long-acting muscarinic antagonists (LAMAs) to treat COPD appears to be different from that in other countries. We assessed the use of these inhalers among individuals prior to enrolment in pharmaceutical interventional studies that were conducted worldwide, including the United States, Europe, and Asia. Figure 4 compares the uses of ICS-containing (A) and LAMA-containing (B) regimens in a subgroup analysis of Japanese COPD patients to those in the complete datasets of COPD patients worldwide (41-48). ICS use was less frequent, and LAMA use was more frequent in Japan. This might be partially influenced by the current guideline from the Japanese Respiratory Society, in which long-acting bronchodilators, but not ICS, are main therapeutic agents in COPD while ICS should be used only in patients with asthmatic features (49).

Figure 4 Use of ICSs and LAMAs prior to enrolment in international interventional studies. DYNAGITO (41,42), IMACT (43,44), KRONOS (45,46), and SHINE (47,48) studies were conducted all over the world, including in the United States, Europe, Asia, and Japan. The use of inhaled corticosteroids (ICSs) and long-acting muscarinic antagonists (LAMAs) was compared between a subset of the Japanese population and the whole data set.

In the COPD Assessment in Practice (CAP) study, 123 outof 1,168 Japanese patients with COPD (10%) received LTOT (18). Another report showed that the percentage of COPD patients using home-based LTOT to all patients using home based LTOT has been approximately 50% over time (53). In a single center prospective study, of 101 COPD patients who showed mild hypoxaemia (PaO2<80 Torr) at the baseline evaluation, 10 (10%) developed chronic respiratory failure during 6-year follow-up and started LTOT. Diffusion capacity for carbon monoxide (DLCO) at the baseline was associated with higher risk of future administration of LTOT in patients with COPD (54).

Bronchoscopic lung volume reduction (BLVR), particularly using endobronchial valves, has been shown to be effective in improving lung hyperinflation and exercise capacity in COPD patients (55). However, although a phase III trial had been conducted, the use of this procedure is limited in Japan. In a small report, BLVR using transbronchial infusion of autologous blood and thrombin was effective in 3 patients with very severe COPD (56). This concept needs to be further investigated in Japanese patients with advanced emphysema.

The prevalence rates of airflow limitation and COPD underdiagnosis are still high in Japan. Distinct clinical features such as high frequency of osteoporosis, low BMI, malnutrition, lower frequency of reported exacerbations and less frequently use of ICS in Japan should be considered when interpreting results and guidelines made based on international studies.

Funding: This work was partially supported by a grant from the Japan Society for the Promotion of Science (JSPS) [Grants-in-Aid for scientific research 19K08624].

Provenance and Peer Review: This article was commissioned by the Guest Editor (Ki-Suck Jung and Chin Kook Rhee) for the series “current epidemiology and policies of COPD worldwide” published in Journal of Thoracic Disease. The article has undergone external peer review.

Open Access Statement: This is an Open Access article distributed in accordance with the Creative Commons Attribution-NonCommercial-NoDeri 4.0 International License (CC BY-NC-ND 4.0), which permits the non-commercial replication and distribution of the article with the strict proviso that no changes or edits are made and the original work is properly cited (including links to both the formal publication through the relevant DOI and the license). See: https://creativecommons.org/licenses/by-nc-nd/4.0/.