The role of seven autoantibodies in lung cancer diagnosis

Lung cancer is the most common malignant tumor in the world, which seriously threatens the health of people health. It the highest global age-standardized incidence rate (ASIR) and age-standardized mortality rate (ASMR) according to the Global Cancer Report 2016, with 2.1 million new cases and 1.8 million deaths occurring annually (1). The overall 5-year survival rate for lung cancer is only 18.6%, which is primarily due to the fact that most patients are diagnosed at a late stage and miss the optimal time for treatment.

We present the following article in accordance with the STARD reporting checklist (available at https://dx.doi.org/10.21037/jtd-21-835).

A total of 370 patients admitted to the Department of Thoracic Surgery at the First Affiliated Hospital of Suzhou University from 2017 to 2019 were included in this study. All subjects were diagnosed with pulmonary nodule that could be a malignant one and received surgical treatment. Healthy people were not our projects According to the routine pathology results, 305 patients were diagnosed with lung cancer, while 65 patients were benign lesions patients. Of the 370 patients, 153 were men and 217 were women. Also, 162 subjects were over 60 years of age, and 208 subjects were under the age of 60. There were 63 smokers, while the remaining 307 subjects had no smoking history. Of the 305 lung cancer patients, 267 were diagnosed with adenocarcinoma, including 97 adenocarcinomas in situ, three minimally invasive adenocarcinomas, and 167 invasive pulmonary adenocarcinomas. Moreover, there were 23 squamous cell carcinoma patients, 5 complex cancers, 5 large cell carcinomas, and 4 small cell carcinomas. TNM staging: I period in 285 cases, II period in 17 cases, III period in 1 case, and IV period in 2 cases.

Patients with lung nodules detected by high-resolution chest CT, which were highly suspected of being lung cancer based on clinical experience, were eligible for inclusion in this study. The exclusion criteria were as follows: (I) patients with distant metastasis after PET-CT detection; (II) those unable to accept surgery; (III) those who refused to accept serological detection of autoantibodies to lung cancer; and (IV) patients lacking clear pathological types and clinical TNM stages.

Serum from 5 mL fasting blood was collected in the normal serum tube. The serum was separated after centrifugation and completed within 8 hours. If more than 8 hours passed, the serum should be stored at 2–8 °C. The concentrations of the seven autoantibodies (P53, PGP9.5, SOX2, GAGE7, GBU4-5, MAGEA1, and CAGE) were determined by enzyme linked immunosorbent assay (ELISA). The autoantibody detection kit was purchased from Hangzhou Kai Paul Biotechnology Co., Ltd.

Statistical analysis was performed using SPSS24.0. All indicators were tested for normality using the Kolmogorov-Smirnov test, and the results showed that all of the indicators were in accordance with the non-normal distribution. Measurement data were expressed as median (Quartile) [M (p25, p75)]. The Mann-Whitney U test was used to compare the differences in expression levels between the two groups. The Kruskal-Wallis H test was used for intergroup comparisons; if the results exhibited differences, the Nemenyi test was used to further infer the difference between the two groups. The diagnostic efficacy of single autoantibody detection and combined detection was compared by constructing ROC (receiver operating characteristic) curves. Comparison of the positive rate between groups was performed using the chi-square test, corrected chi-square test, and Fisher exact probability method. P<0.05 indicated a statistical difference, and P<0.01 signified a significant statistical difference.

The study was conducted in accordance with the Declaration of Helsinki (as revised in 2013). The study was approved by First Affiliated Hospital of Soochow University ethics and informed consent was taken from all the patients.

The expression levels of the seven autoantibodies in the lung cancer group (P53, PGP9.5, SOX2, GAGE7, GBU4-5, MAGEA1, and CAGE) were higher than those of the benign lesions control group, and the results were statistically different (P<0.05). In the lung cancer group, the levels of SOX2, GAGE7, MAGEA1, and CAGE exhibited significant statistical differences (P<0.01). The specific values are shown in Table 1.

The 305 patients in lung cancer group were divided into the following groups according to their pathological types: an adenocarcinoma group [267], a squamous cell carcinoma group [23], and a non-adenocarcinoma non-squamous cell group [15]. The Kruskal-Wallis H tests results showed that all seven lung cancer autoantibodies were not statistically different in these three groups (P>0.05). The specific values are shown in Table 2.

Evaluation of the diagnostic efficacy of autoantibodies in lung cancer detection 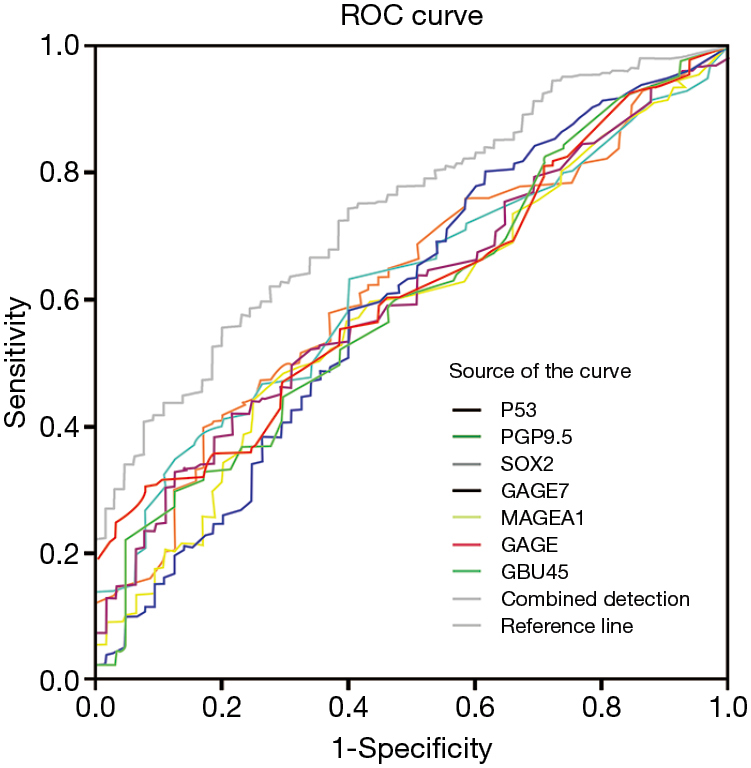 To analyze whether there were statistical differences in the positive rates of autoantibodies in different groups, we divided the 305 lung cancer patients according to sex, age, smoking history, TNM stages, and pathological types. There 122 were male patients and 183 females; 138 subjects were over 60 years of age and 167 under 60 years of age; there were 52 smokers, while 253 subjects did not have a history of smoking; and TNM staging was as follows: I period in 285 cases, II period in 17 cases, III period in one case, and IV period in two cases.

Lung cancer has the highest morbidity and mortality rates of any malignancy both in China and worldwide. Patients with early diagnosis have a higher 5-year survival rate. The 5-year survival rate of patients with non-small cell lung cancer is 92% in the IA stage and less than 10% in the IV stage (5). Therefore, early diagnosis is critical in the treatment of lung cancer. In the early stages of cancer, the body’s immune system can recognize a small amount of abnormal proteins expressed by tumor cells through humoral immunity (i.e., tumor specific antigens), and produce antibodies against these antigens. Different kinds of lung cancer patients can detect tumor specific antigens in serum. These antibodies can be detected not only when lung cancer is diagnosed, but in some cases even 5 years before clinical symptoms appear (6). According to a study conducted by Chapman et al. (7), the sensitivity of the seven autoantibodies specific for Europeans (P53, c-myc, HER-2, NYESO1, CAGE, MUC1, and GBU4-5) is 76% and the specificity is 92%. The China Food and Drug Administration (CFDA) (8) specifically selected seven autoantibodies suitable for Chinese people.P53 can be detected in lung cancer patients as autoantibody produced by tumor suppressor genes. The MAGE-A1 belongs to the cancer/testicular antigen of the X chromosome cluster, expressed in a variety of tumors. GAGE is found in a variety of cancers, most common in melanoma, lung cancer. Expression of CAGE is associated with the cell cycle, and plays a role in cell growth and proliferation. GBU4-5, in the family of tumor-testicular products, is immunogenicity, cancer-specific, and may provide potential targets for the diagnosis and treatment of cancer.PGP9.5 increases deubiquitination of cyclin, which may lead to uncontrolled growth of tumor cells.SOX2 is expressed in lung cancer, breast cancer, ovarian cancer, and its ability to metastasize is proportional to its overexpression.

We also compared the positive rates of seven autoantibodies in lung cancer patients with different clinicopathological characteristics. We observed that there were no statistical differences in age, smoking history, and clinical stage (P>0.05), while the positive rates of MAGEA1 and CAGE were statistically significant in sex. Also, the positive rate of MAGEA1 was statistically significant in pathological classification. The distribution of P53, PGP9.5, SOX2, GAGE7, and GBU4-5 was uniform in age, sex, smoking history, clinical stage, and pathological classification, which was consistent with the results Zhang et al. (11). According to Hibi et al. (16), PGP9.5 was associated with the clinical stage of lung cancer (the positive rate of lung cancer was 44% in stage I, and 75% in stages II and III stage). The meta-analysis by Li et al. (17) revealed that SOX2 was associated with sex and smoking history, and was highly expressed in squamous cell carcinomas. Moreover, the meta-analysis by Chen et al. (18) found that SOX2 had nothing to do with gender and smoking history. At the same time, it had high expression in squamous cell carcinomas, which indicated better prognosis in different pathological types of lung cancer, suggesting that SOX2 has the potential to become a prognostic indicator. Gjerstorff et al. (19) revealed that the GAGE7 was not related to the pathological classification of lung cancer, but its expression in stages II and IIIa was significantly higher than that in stage I. The positive rate of CAGE varies between different sexes, and these differences should be excluded when using CAGE to diagnose lung cancer patients. Also, the positive rate of MAGEA1 was different between different sexes and pathological types. This suggested that MAGEA1 had the potential to act as a precise diagnosis autoantibody. According to Sang et al. (20), the expression rate of MAGE-A in lung adenocarcinoma is 46.66%, which was related to a lower 10-year survival rate and was a marker of poor prognosis. MAGE-A may be used as a prognostic assessment factor and a potential therapeutic target.

All of the data included in this experiment were taken from the thoracic surgery database. Most of the patients had stage I adenocarcinoma, however there was a lack of patients with other pathological classifications and clinical stages, which resulted in discrepancies between some of our conclusions and those of other scholars. Thus, we need to strengthen cooperation with the respiratory and oncology departments in the future, in order to expand the scope and number of patients in future trials. This will increase the number of patients with different types, and facilitate more hierarchical research.

In summary, the value of autoantibodies as an auxiliary means of early lung cancer screening was confirmed. However, these autoantibodies did not exhibit obvious advantages for accurate diagnosis. The diagnostic efficacy of the combined detection of the seven autoantibodies was higher than that of single antibody detection, however the sensitivity and specificity were not as high as those of some single antibodies. Therefore, comprehensive evaluation is required for diagnosis.

Reporting Checklist: The authors have completed the STARD reporting checklist. Available at https://dx.doi.org/10.21037/jtd-21-835

Conflicts of Interest: All authors have completed the ICMJE uniform disclosure form (available at https://dx.doi.org/10.21037/jtd-21-835). The authors have no conflicts of interest to declare.

Ethical Statement: The authors are accountable for all aspects of the work in ensuring that questions related to the accuracy or integrity of any part of the work are appropriately investigated and resolved. The study was conducted in accordance with the Declaration of Helsinki (as revised in 2013). The study was approved by First Affiliated Hospital of Soochow University ethics and informed consent was taken from all the patients.