Interest of anatomical segmentectomy over lobectomy for lung cancer: a nationwide study

Lung cancer (LC) remains the leading cause of mortality worldwide, and was responsible for 1,761,007 deaths in Europe in 2018 (1). In patients with localized LC, surgical management remains the best curative treatment as indicated by the 2013 American College of Chest Physicians (ACCP) guidelines, which recommend lobar resection (2). In these guidelines, segmentectomy was described as an alternative to lobectomy in "compromised" patients if margins greater than 2 cm could be achieved (2).

These guidelines are partly based on the results of the Lung Cancer Study Group which led a prospective, multi-institutional randomized trial comparing lobectomy to sublobar resection in 1995 (3). This trial showed that lobectomy was superior to sublobar resection. Therefore, and despite the limits of this trial including wedge resection, lobectomy was accepted as the standard resection for early LC. Since then, numerous papers comparing lobectomy and segmentectomy have been published regarding overall survival, but this topic remains controversial.

In recent years, the practice of segmentectomy has expanded. Several reasons could explain this trend: firstly, the increased incidence of early stage LC managed by surgery, secondly, the ageing of patients with localized LC, and, thirdly, the development of multimodal surgical navigation systems and minimally invasive surgery (4-9).

In 2019, the results of the first randomized control trial comparing anatomical pulmonary segmentectomy to lobectomy was published from data recorded in highly specialized Japanese centers (10). It did not highlight any differences in postoperative mortality, but revealed that, compared to lobectomy, segmentectomy was a predictor of severe pulmonary complications including air leaks and empyema (10). Data regarding overall survival were not yet available.

The main objective of our study was to compare morbidity for the two types of pulmonary resection using data from the Epithor National database. The secondary endpoint was postoperative mortality at 30, 60 or 90 days. The Epithor database collects data from more than 100 hospitals and is thus more representative of real-life thoracic surgery practices than databases that collect data from highly specialized centres alone. A Kernel matching analysis was used to yield a more powerful and comprehensive comparison of postoperative complications and mortality.

We present the following article in accordance with the STROBE reporting checklist (available at http://dx.doi.org/10.21037/jtd-20-2203).

Epithor is a government-recognized clinical database that is ﬁnanced by the French National Cancer Institute (Institute National du Cancer) for data-quality monitoring. Epithor has been accredited as a methodologically appropriate tool for assessing professional surgical practices by the French Health Authorities (Haute Autorité de Santé), a governmental agency dedicated to improving the quality of patient care and to guaranteeing equality within the health care system. French hospitals are now required to participate in Epithor in order to obtain their medical accreditation and thoracic surgery unit certiﬁcation (11,12). Data accuracy has been checked in regular external on-site audits since 2010 (11).

The secondary endpoints were postoperative mortality at 30, 60 and 90 days, defined as any patient who died within the first 90 days following surgery, or the initial hospitalization if longer.

The proportion of missing information regarding tumour stage, lymph node involvement and quality of resection for this study were respectively 18%, 20.5% and 20%. We applied a multiple imputation framework to compensate for missing FEV data. For the variable TNM stage, we created a variable category to include in the analysis. We assumed that the missing data were missing at random.

We used kernel matching algorithms that were developed from a nonparametric regression method for curve smoothing (15,16). A mirrored histogram was used to measure the discriminatory ability of the Kernel matching. Kernel matching used a search algorithm to find a set of weights for each covariate so that the version of optimal balance is achieved after matching (16). We evaluated the ability of Kernel matching to balance the measured covariates between segmentectomy and lobectomy by reducing the standardized difference (17). The standardized difference is the difference between sample means in the segmentectomy and lobectomy group divided by the standard deviation in the treatment group overall (18).

Over the study period, 1,604 segmentectomies and 14,786 lobectomies were performed and recorded in the Epithor database.

Unmatched patient demographics, surgical management, tumour and hospital characteristics are presented in Table 1. In the segmentectomy group, the proportion of women and older patients was significantly higher. They were more likely to have a history of pulmonary disease, heart disease, cancer, or previous thoracotomy, and there was a higher proportion of ASA score ≥3, performance status score ≥2, BMI ≥28 kg/m2 and lower FEV1 (Table 1). Segmentectomies were more often performed by VATS in higher volume non-teaching hospitals. The diagnoses was more often for stage I, without lymph node involvement, but segmentectomies resulted in more incomplete R1 or R2 resection (Table 1). 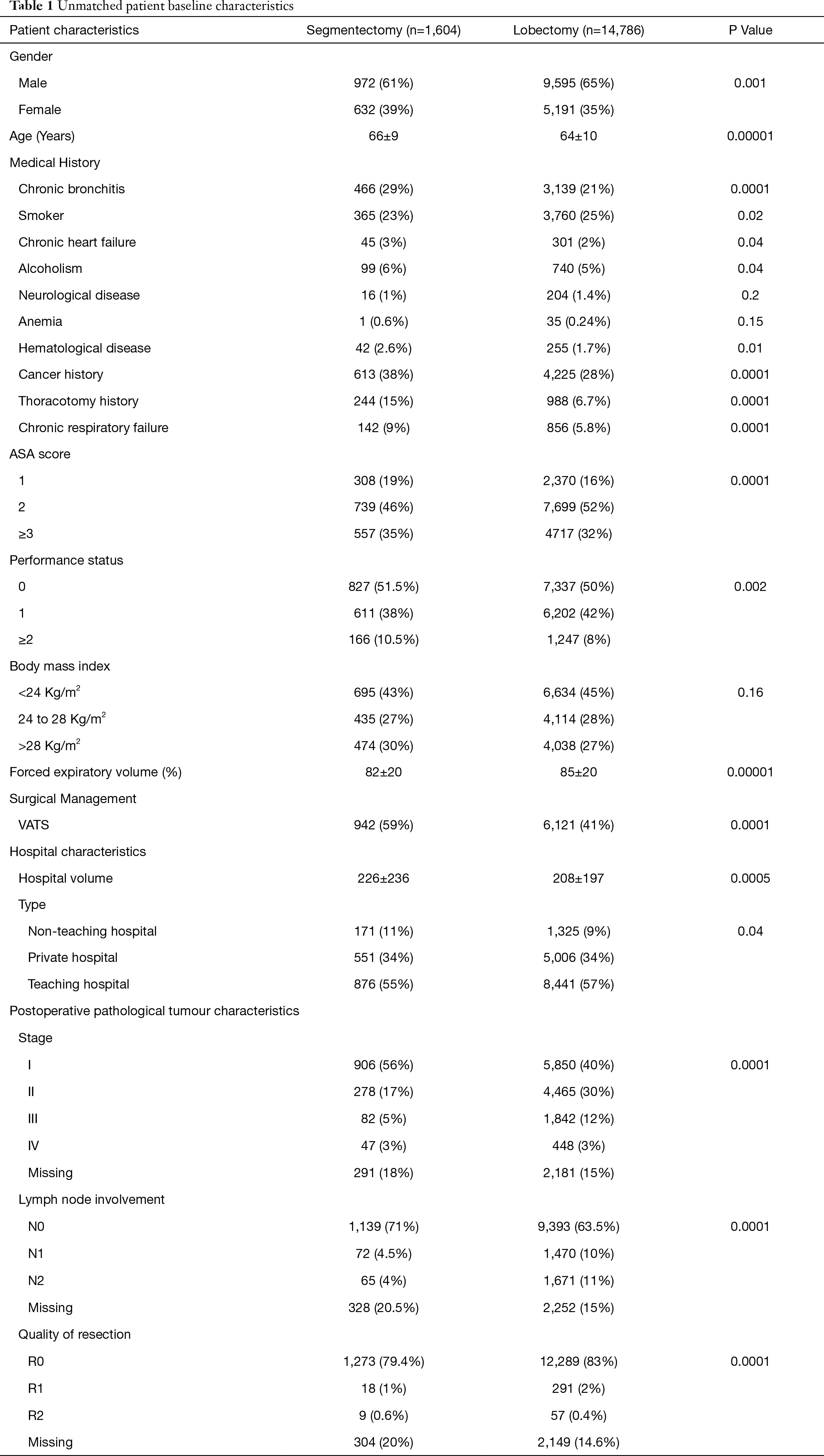 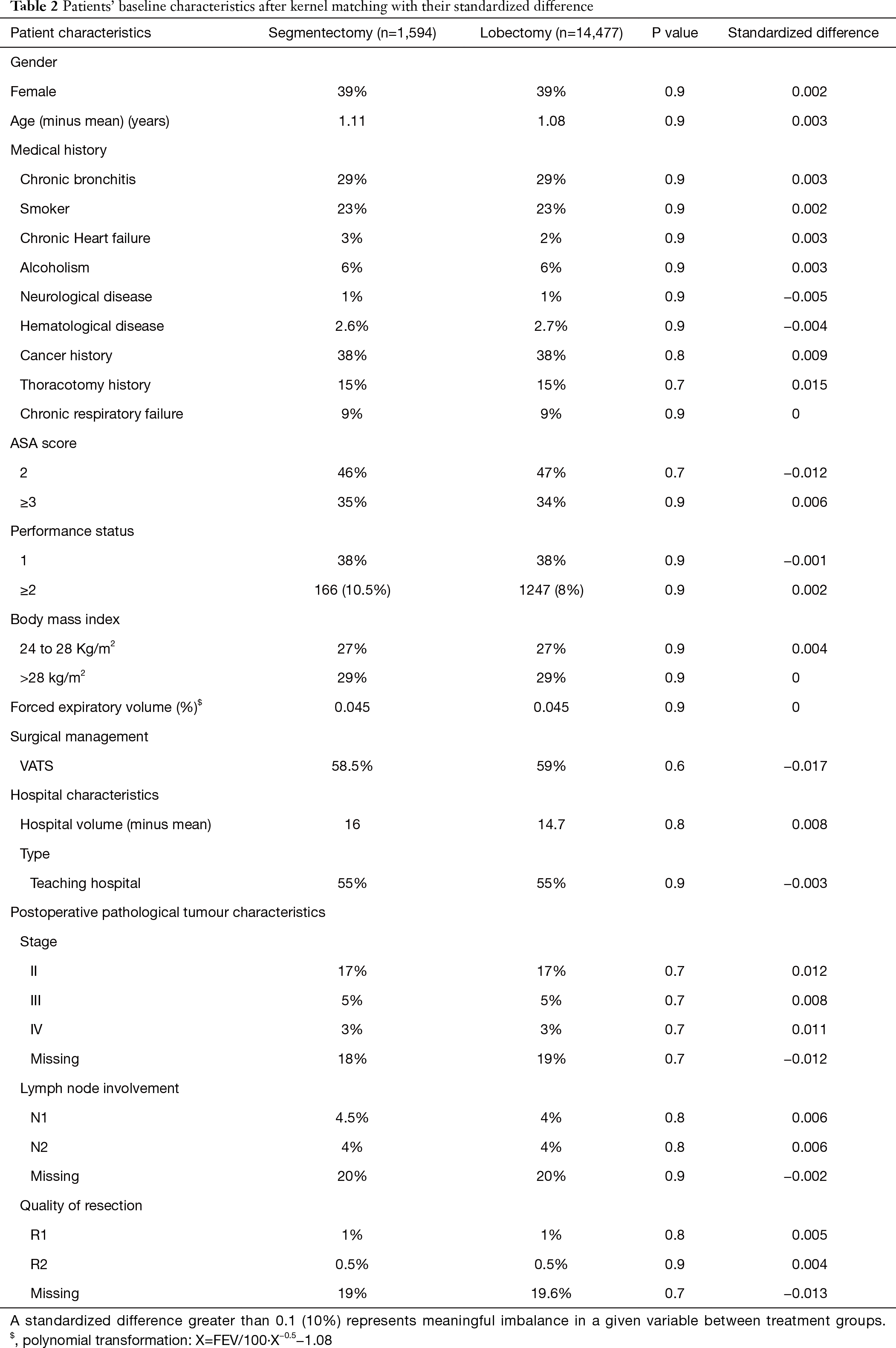 The mirrored histogram shows a well-balanced distribution of covariates after kernel matching (Figure 1). The median distribution of the standardized biases was of 0.045 for the kernel matching approach (Table 2). The standardized difference never reached the value of 10% (Table 2), indicating that the covariates were well balanced for the 2 groups. 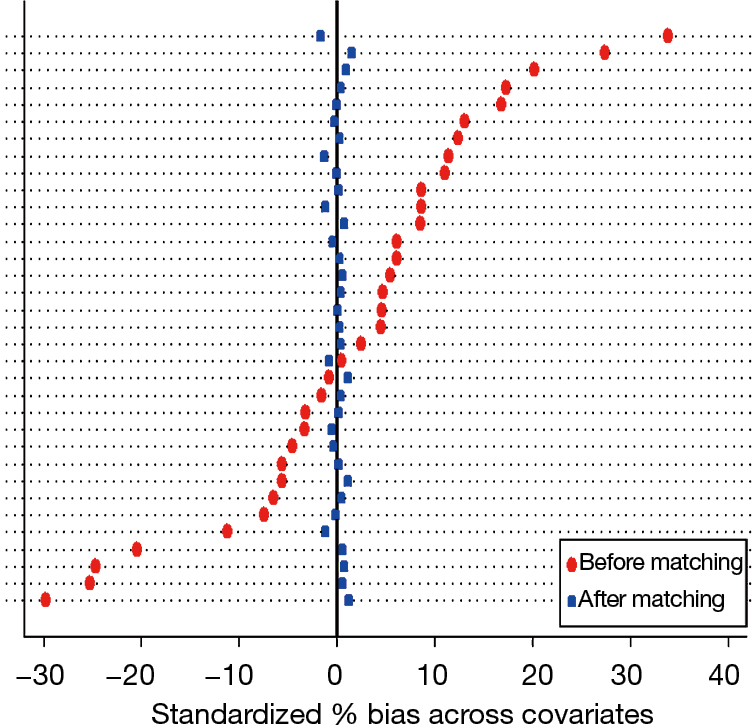 Figure 1 Standardized differences of covariates before and after matching. 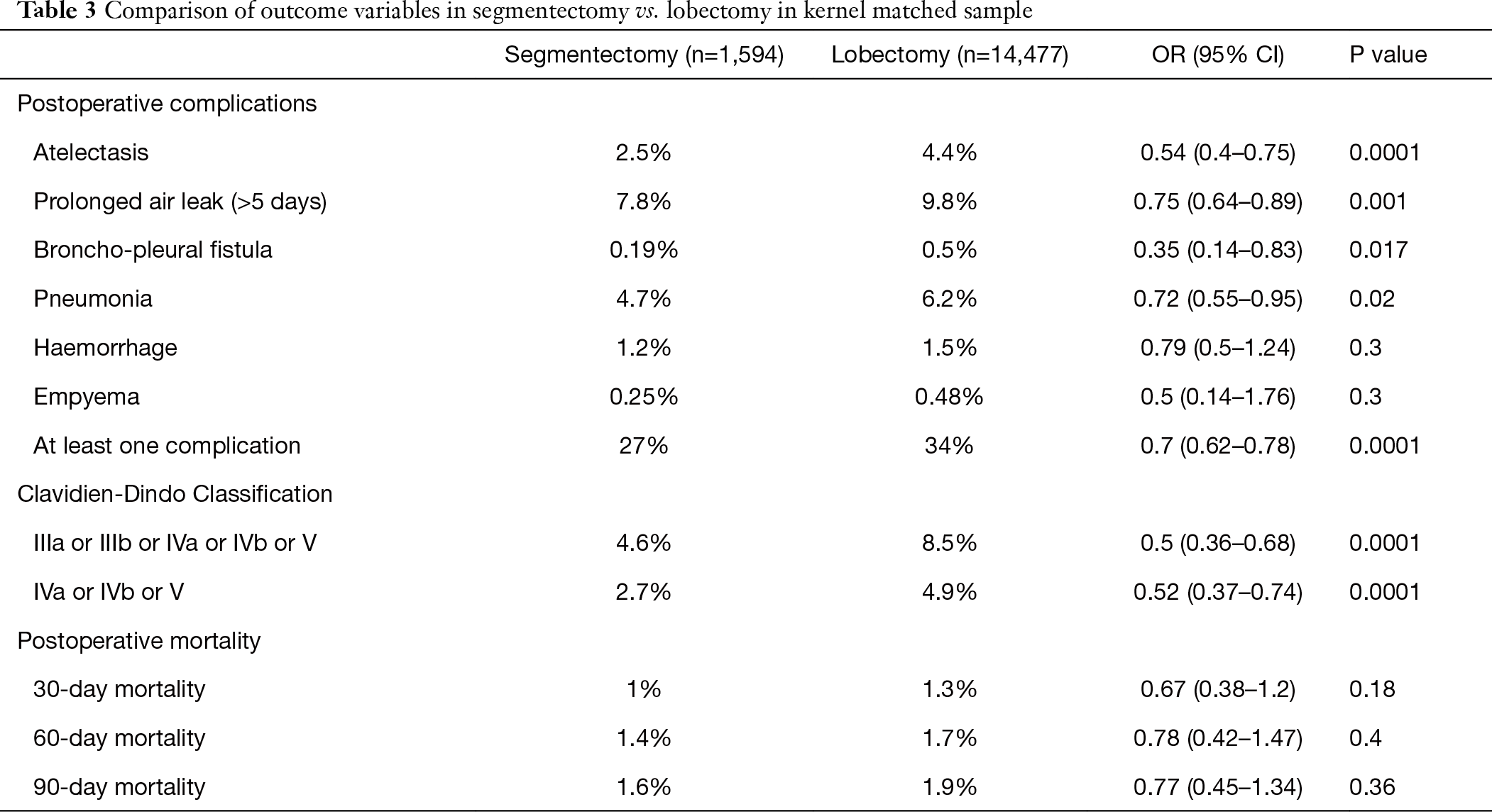 Almost 50 years ago, Jensik et al. was the first to suggest that segmentectomy could be equivalent to lobectomy in terms of overall survival and recurrence for early LC (19). However, in 1995, data from the LC Study Group indicated that lobectomy should be the standard procedure for early primary LC (3). Since then, considerable amounts of data have been published, including from large databases, yet no large randomized controlled trials (excluding wedge resection) have definitely settled the interest of segmentectomy over lobectomy for early primary LC, especially regarding overall survival and recurrence (20-25).

Nowadays, the ACCP recommends segmentectomy over lobectomy in patients with a major risk of perioperative mortality or competing causes of death such as age or other co-morbidities (2). However, the outcomes of segmentectomy and lobectomy have rarely been compared. In their recent randomized controlled trial, Suzuki et al. (10) reported finding no difference in postoperative outcomes between the two approaches.

Though postoperative mortality was similar in the two groups, postoperative complications appeared to be significantly more frequent in the lobectomy group. We found that patients were more likely to have at least one complication after lobectomy, with an OR of 0.7 in favour of segmentectomy. Deng et al., reporting data from the Mayo Clinic, showed that after matching of 177 segmentectomies to 531 lobectomies operated by open thoracotomy, there were fewer complications in the segmentectomy group (32.2% vs. 41.6%, P=0.02). However, this difference disappeared when they used a matching analysis to compare patients who were operated with a VATS approach (28).

Moreover, we found fewer postoperative pulmonary complications after segmentectomy, whether it was atelectasis or pneumonia. These complications are rarely mentioned in the literature, and the mechanisms are uncertain. Suzuki et al. highlighted more pulmonary air leaks or fistula after segmentectomy (6.5% vs. 3.8%), but they did not distinguish between pulmonary air leaks and bronchial fistula. Two additional studies found similar levels or less pneumonia after lobectomy. These varying results are difficult to explain. Our study includes a large number of lobectomies for which we were not able to specify the location of the resected lobe. So, as previously described, patients who undergo lobectomy have a higher risk of developing air leaks, especially after upper lobectomy (34). Regarding atelectasis or pneumonia, we did not find any explanation in the literature. We believe that these differences may be linked to the fact that segmentectomy preserves more lung function than lobectomy, resulting in earlier rehabilitation and a decrease in postoperative pulmonary complications; the differences may also be associated with the quality of patient outcomes data entered in the database (35).

We found that segmentectomy halved the risk of developing a severe postoperative complication (higher than grade IIIa in the Clavien-Dindo classification, meaning that the patient needs additional surgical management under local anaesthesia or more) (14). In their trial, Suzuki et al. used the Common Terminology Criteria for Adverse Events (CTCAE) to define their complications (10). They found no difference in the occurrence of complications needing additional surgical management or a prolonged hospital stay when they compared the two types of pulmonary resection. Handa et al. showed that patients were more likely to develop a grade IIIa complication or higher after lobectomy than after segmentectomy (9.6% vs. 3%, P=0.076), but the results did not reach significance, probably due to the study’s small sample size (26).

The main strengths of this study are the use of a national database, which provided a large number of patients and a homogeneous population. In addition, the large number of patients in both groups allowed us to make powerful comparisons. The homogeneous population reduced the sample size needed for the matching comparison, and the reasonable length of the study period decreased historical bias.

However, any study involving a large database raises the question of the quality and exhaustiveness of the prospectively entered data such as comorbidities, and observational studies are notoriously full of missing values. Few details were available about the surgical technique, especially concerning the location of the resected segment, the type of the segmentectomy (simplex or complex), the value of the preoperative of diffusing capacity of the lung for carbon monoxide (DLCO), the value of the cardiopulmonary exercise testing, or postoperative predicted FEV1 value. We used Kernel matching to create comparable cohorts; however, we cannot be certain that the Kernel matching perfectly neutralized all of the confounding variables.

This work was performed on behalf of the French Society of Thoracic and Cardiovascular surgery (Société Française de Chirurgie Thoracique et CardioVasculaire – SFCTCV). We are grateful to all the French thoracic surgeons who participated in this study and have been listed in . The authors would like to thank Suzanne Rankin (Dijon University Hospital) for reviewing the manuscript.

Reporting Checklist: The authors have completed the STROBE reporting checklist. Available at http://dx.doi.org/10.21037/jtd-20-2203

Ethical Statement: The authors are accountable for all aspects of the work in ensuring that questions related to the accuracy or integrity of any part of the work are appropriately investigated and resolved. The study was conducted in accordance with the Declaration of Helsinki (as revised in 2013). Institutional ethical approval and Individual informed consent were waived.