Bioprosthetic valve replacement is a useful option in mitral valve (MV) surgery, having low thromboembolic risks without the need for life-long anticoagulation. Despite advancements in valve technology, the durability of bioprosthetic valves remains an issue, which results in structural valve deterioration (SVD). Several types of bovine pericardial and porcine valves are currently available, and they have been used exclusively based on surgeons’ preferences. Although previous studies have demonstrated the long-term clinical outcome and durability of bioprosthetic mitral valve replacement (MVR) (1-3), data directly comparing long-term results after MVR using these two types of valves are scarce. Therefore, this study was conducted to compare long-term results after MVR using Carpentier-Edwards bovine pericardial and Hancock II porcine bioprosthetic valves.

We present the following article in accordance with the STROBE reporting checklist (available at https://dx.doi.org/10.21037/jtd-21-281).

The study was approved by the institutional review board of Seoul National University Hospital (IRB No.: 2004-053-111), and the requirement for patient consent was waived. This study complied with the Declaration of Helsinki. From January 2001 to December 2018, 1,156 patients underwent MVR at our institution. Of these patients, 814 who underwent MVR with mechanical valves and 33 who underwent MVR with other types of tissue valves were excluded. A total of 309 patients who underwent MVR with Carpentier-Edwards PERIMOUNT bovine pericardial valves (Edwards Lifesciences, Irvine, CA, USA; BMVR group, n=241) or Hancock II porcine bioprosthesis (Medtronic, Inc., Minneapolis, MN, USA; PMVR group, n=68) were enrolled (Figure 1). The mean age at operation was 65.8±11.5 years, and 213 (68.9%) were female patients. The BMVR group patients were older, had a smaller body surface area, were more likely to have hypertension, and were less likely to have left ventricular dysfunction than the PMVR group patients, however, not different in Euroscore II (Table 1).

All operations were performed with aorto-bicaval cannulation under moderate hypothermia and cold cardioplegic arrest. The selection of the valve was at the discretion of the attending surgeons. Concomitant procedures included aortic valve surgery (n=110, 35.6%), tricuspid valve procedure (n=133, 43.0%), arrhythmia surgery (n=107, 34.6%), and coronary artery bypass grafting (n=17, 5.5%). The mean cardiopulmonary bypass and aortic cross-clamp times were 224.2±76.6 and 149.1±50.4 minutes, respectively. The aortic cross-clamp time was longer, and more concomitant procedures were performed in the BMVR group than in the PMVR group (Table 2).

Early mortality was defined as death within 30 days of operation. Patients underwent regular postoperative follow-up at the outpatient clinic at 3- to 6-month intervals. If the patients did not attend the outpatient clinic at the scheduled time, they were contacted through telephone regarding their condition. In addition, the survival data of the patients were obtained based on data from the Korean National Health Insurance. The follow-up ended on February 28, 2020. Routine echocardiographic evaluations were performed before discharge and 6 months to 1 year after surgery. Thereafter, follow-up echocardiography was performed at the discretion of the physician based on patients’ symptom and auscultatory findings. The completeness of follow-up was 100% for survival data and 94.5% for other outcomes. The mean clinical and echocardiographic follow-up durations were 81.4±60.0 and 57.8±53.3 months, respectively.

Oral anticoagulants were prescribed to achieve a target international normalized ratio of 2.5–3.0 for 6 months. However, it was prescribed for life in 106 patients (34.3%) who had mechanical valves in other valve positions or had atrial fibrillation.

Cardiac death was defined as death due to cardiac causes, including sudden death. SVD was defined as intrinsic changes to the xenograft, such as leaflet thickening, calcification, and tear, leading to mitral stenosis with the mean pressure gradient over 6 mmHg or mitral regurgitation of greater than or equal to moderate degree (4-6). Changes in echocardiographic data such as increase of mean pressure gradient or regurgitation due to prosthetic valve endocarditis was excluded. The diagnosis of SVD relied on the aspects of the valve at reoperation and on echocardiographic surveillance. Changes in echocardiographic data at preoperative period, early postoperative period, and last follow-up are presented in the supplementary material (Table S1). Non-structural valve dysfunction (NSVD) was defined as a valvular abnormality without intrinsic valvular dysfunction, such as pannus formation and paravalvular leak. Major bleeding was defined as any bleeding causing death, hospitalization, or permanent injury or necessitating transfusion. Mitral valve-related events (MVREs) were defined as (I) cardiac death; (II) a composite of thromboembolism and major bleeding (CTEB), (III) SVD, (IV) NSVD, (V) prosthetic MV endocarditis, (VI) MV reoperation, and (VII) permanent pacemaker implantation within 14 days following MVR (4).

Early mortality occurred in 20 (6.4%) patients. There were no differences in early mortality and postoperative complications between the two groups, except for a lower incidence of reoperation due to bleeding in the BMVR group than in the PMVR group (Table S2). 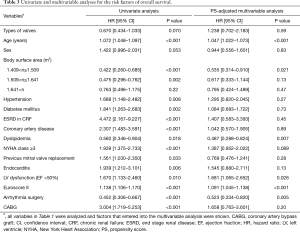 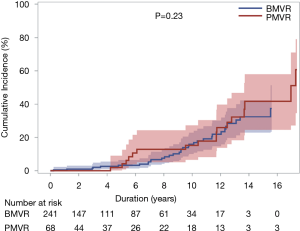 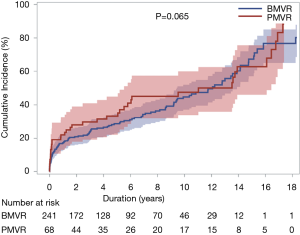 The present study demonstrated two main findings. First, the cumulative incidence of SVD was not different after bovine pericardial and porcine bioprosthetic MVR over an 18-year postoperative follow-up period. Second, long-term clinical outcomes, including survival and MVRE, were not significantly different between the BMVR and PMVR groups.

Although MV repair has been widely adopted for the surgical treatment of MV disease, MVR remains a viable option for patients with rheumatic MV disease and those with functional mitral regurgitation (7-9). Despite its major advantage of low thromboembolic risk without the need for life-long anticoagulation after bioprosthetic MVR, the occurrence of SVD and resultant reoperation during the follow-up is still a major disadvantage.

Efforts have been made to improve the durability of bioprosthetic valves, such as inhibiting calcium phosphate formation, modification of calcifiable material, and improvement of glutaraldehyde fixation (10). In particular, for anticalcification, RESILIA™ tissue with ethanol rinsing and glycerolization is used for bovine pericardial valves, and α-amino oleic acid and surfactant treatment are used for porcine valves (11-14). Several products made of bovine pericardium and porcine valves are available in the market. Numerous studies have shown comparable durability of these two types of bioprostheses in the aortic position (15,16). In the mitral position, however, data directly comparing long-term results after MVR using currently available bovine pericardial and porcine valves are scarce. A previous study demonstrated that the 14-year freedom-rate from SVD after bioprosthetic MVR using Carpentier-Edwards PERIMOUNT valves was 81.9% (3). Another study showed a 15-year freedom-rate from an SVD of 83% after MVR using Hancock II valves (2). A recent meta-analysis analyzed the occurrence rates of SVD after MVR using several types of tissue valves (17). It revealed that 10- and 15-year freedom-rates from SVD were 91% and 61%, respectively, for Carpentier-Edwards pericardial valves, and 84% and 66%, respectively, for Hancock II porcine valves. However, this meta-analysis was performed indirectly because there were no studies directly comparing MVRs using Carpentier-Edwards and Hancock II bioprostheses. In the present study, these two types of valves were directly compared, and PS-adjusted analyses were performed to minimize bias owing to the retrospective design of this study. The present study showed that the 15-year cumulative incidences of SVD in the BMVR and PMVR groups were 32.4% and 41.7%, respectively. These might be higher than those reported in the literature because SVD was diagnosed at reoperation or autopsy in the previous studies (1,2,15,18), whereas it was diagnosed using either reoperative findings (4-6). The PS-adjusted multivariable analysis showed no significant differences in the cumulative incidences of SVD between the BMVR and PMVR groups over a period of 18 years after surgery. SVD is caused by intrinsic changes such as leaflet fibrosis, thickening, and calcification (19). A previous study suggested that degeneration in bovine pericardial valve, while it was combined degeneration and leaflet tear in porcine type of valve (20). Although we did not collect detailed data regarding the exact causes of the SVD, 31 out of 33 SVDs resulted in prosthetic valve stenosis or steno-insufficiency in the BMVR group, whereas SVD resulted in stenosis or regurgitation with similar proportions.

The risk factor analyses showed that Euroscore II was a factor associated with various events after MVR including overall survival, SVD and MVRE. Euroscore II is a well-known evaluation tool to predict early mortality after cardiac surgery (21). The present study showed that the Euroscore II also reflected long-term survival after bioprosthetic MVR. Contrary to survival and MVRE, Euroscore II had negative correlation with SVD. This might be due to high probability of death in patients with high Euroscore II, which masked the risk of SVD, although competing risk analysis were performed.

There are several limitations that should be noticed in the present study. First, this was a retrospective study from a single center. Although PS analyses were performed, non-adjustable confounders could have affected the study results. Second, follow-up echocardiography was not performed on a regular basis. Third, in-depth analysis regarding the SVD were limited due to a retrospective nature of the present study; both stenosis and regurgitation of the prosthetic valve were treated as the same SVD and hemodynamic consequence and clinical physical status of patients with SVD were not analyzed further. Fourth, 15-year cumulative incidence of the SVD was not identical between the two groups, although it was not significant in the PS-adjusted multivariable analysis. Further study with longer-term follow-up might be needed to draw definite conclusion.

The clinical outcomes including overall survival, SVD and MVRE after bioprosthetic MVRs using Carpentier-Edwards bovine pericardial and Hancock II porcine valves might not be significantly different for, on average, 7 years of clinical follow-up. Surgeons could select either prosthesis based on their own experiences.

We wish to thank the Medical Research Collaborating Center, Seoul National University Hospital for the statistical analysis and consultation.

Reporting Checklist: The authors have completed the STROBE reporting checklist. Available at https://dx.doi.org/10.21037/jtd-21-281

Conflicts of Interest: All authors have completed the ICMJE uniform disclosure form (available at https://dx.doi.org/10.21037/jtd-21-281). The authors have no conflicts of interest to declare.

Ethical Statement: The authors are accountable for all aspects of the work in ensuring that questions related to the accuracy or integrity of any part of the work are appropriately investigated and resolved. The study was conducted in accordance with the Declaration of Helsinki (as revised in 2013). The study was approved by the institutional review board of Seoul National University Hospital (IRB No.: 2004-053-111), and the requirement for patient consent was waived.