The increased demand to reduce costs and hospitalization in general pushed several institution worldwide to develop fast-tracking protocols after pulmonary resections (1). One of the commonest cause of protracted hospital stay, as well as one of the most frequent complications after pulmonary resection, remains the prolonged air leaks (ALs). Their incidence may depend on several factors, which also include physiological patient’s characteristics at the time of surgery. About 30% of patients receiving lung resection may have ALs either immediately after operation or during the first postoperative day (POD) (2-4). Moreover, ALs are considered prolonged if they persist for more than 5 to 7 days.

The duration of chest drain after lung resection depends on several factors, one of which is the possible interobserver variability concerning ALs presence and/or entity (5). The availability of electronic devices made possible to reduce this variability, improving the rate of sooner chest drainage removal. Their superiority compared to traditional devices has been demonstrated by some recent studies (6-10), whilst other did not reach the same conclusion (11).

Since we had the opportunity to use a new and more sophisticated version (Drentech™ Palm Evo, Redax S.p.A, Poggio Rusco Mantova, Italy) of the previous digital device we used (9), we reviewed our clinical practice with the aim to compare traditional vs. digital chest drainages in order to evaluate if the electronic is more effective than the traditional to correctly manage chest drainage after elective pulmonary resections for lung malignancies.

This is a mono-institutional prospective observational study. All patients submitted to elective pulmonary resection for primary lung cancer or lung metastases, between April to December, 2014 in our General Thoracic Surgery Department were included in the study. The only exclusion criteria was the presence of strong and diffuse pleural adhesions detected at the time of surgery, because of the high-risk of postoperative prolonged ALs, in order to minimize the variability between the groups of the study.

Patients treated with preoperative protocols (i.e., chemotherapy, radiotherapy) were also considered. Surgical procedures were performed through a muscle-sparing anterolateral o posterolateral thoracotomy, according to the surgeon’s preference. Staplers were used to complete the fissures. Systematic lymphadenectomy was routinely performed in case of primary lung cancer. Metastasis was managed by segmental or wedge resection using a stapler device. Sealants (i.e., TachoSil®-Nycomed, Vienna, Austria) were placed in case of intra-operative ALs.

At the end of each surgical procedure, one chest tube (between 24 to 28 French in size) was used and placed on 20 cmH2O suction. The suction was applied in different method, as follows: 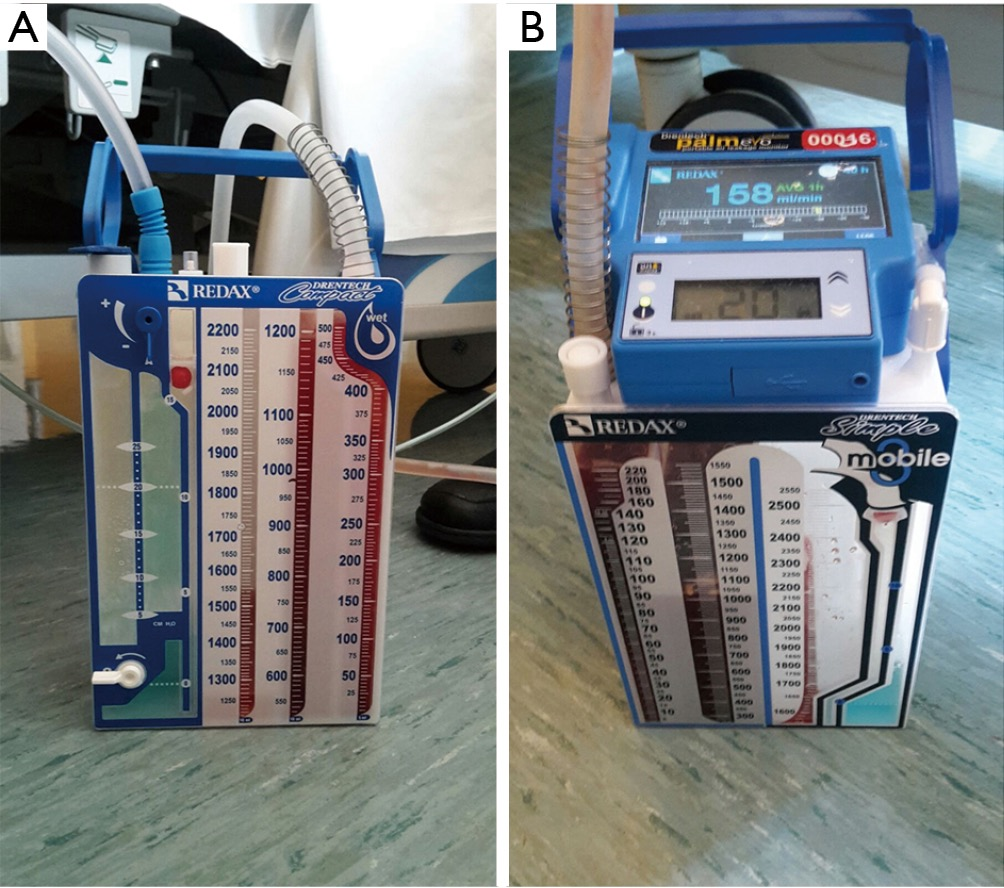 Figure 1 Traditional (A) and digital (B) chest drainages used in this study.

A chest X-ray (CXR) was taken in POD 1. The chest drain algorithm for its removal was as follows:

Clinical, surgical and pathological characteristics encompassed in the study are the following: age (as continuous), body mass index (BMI), gender, smoke habit, forced expiratory volume in the first second (FEV1), %FEV1 (%), side of surgery (left vs. right), preoperative lung atelectasis, tumor size (mm), kind of surgical resection (lobectomy vs. wedge/segmentectomy vs. bilobectomy), pTNM tumor stage [in case of non-small cell lung cancer (NSCLC): Ia-Ib vs. IIa-IIb vs. IIIa-IIIb], preoperative treatments (i.e., chemotherapy or radiotherapy). The primary outcome was the chest tube duration, which was calculated in days; the secondary outcome was the postoperative overall hospitalization. Finally, the association between post-operative morbidity and kind of drainage system was also evaluated.

Categorical data are presented as number (percentage, %), continuous ones as median [interquartile range (IQR)]. Significant differences between traditional and digital groups were investigated with logistic regression models. Numerical variables between the groups were compared by means of the unpaired Wilcoxon-Mann-Whitney test.

Patients’ characteristics are shown in Table 1. During the study period, a total of 80 consecutive patients underwent surgery for primary lung cancer or lung metastases. The mean age was 68 years [standard deviation (SD): 8.1]; the majority of patients were male (48-60%) and smoker (49-61%). BMI (25.4 DD vs. 25.7 TD, P=0.602) and FEV1% (P=1) were similar in the two groups. Any patient presented a preoperative lung atelectasis. Six (8%) were submitted to preoperative treatment: five patients underwent chemotherapy and one patient radiotherapy, respectively. 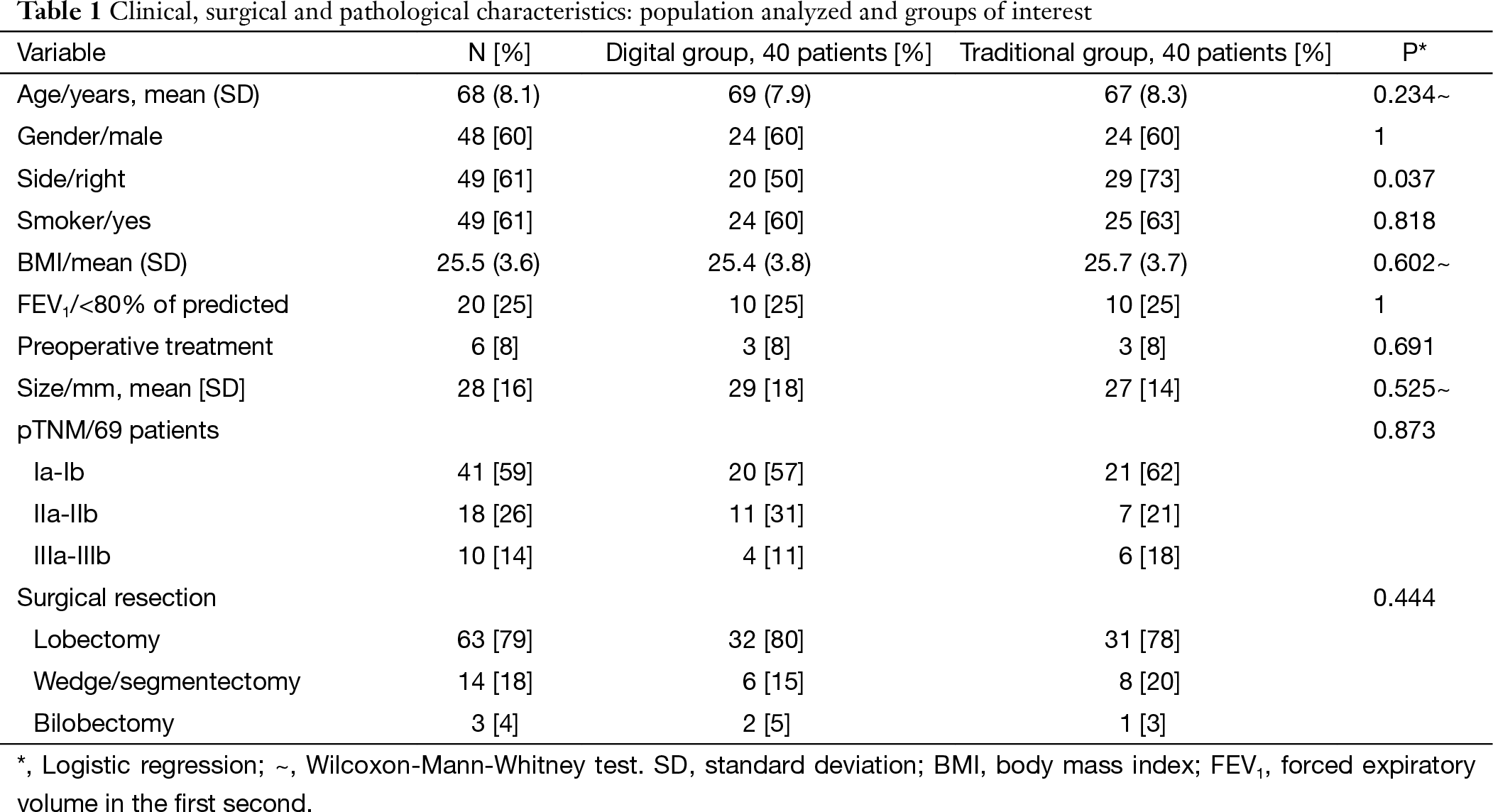 Sixty-nine patients were diagnosed with a NSCLC and 11 with a lung metastasis (Figure 2). In the NSCLC group there were: 56 adenocarcinomas, 10 squamous cell carcinomas and 3 carcinoids. Their pTNM stage was distributed as follows: 27 stage Ia, 14 stage Ib, 15 stage IIa, 3 stage IIb and 10 stage IIIa. 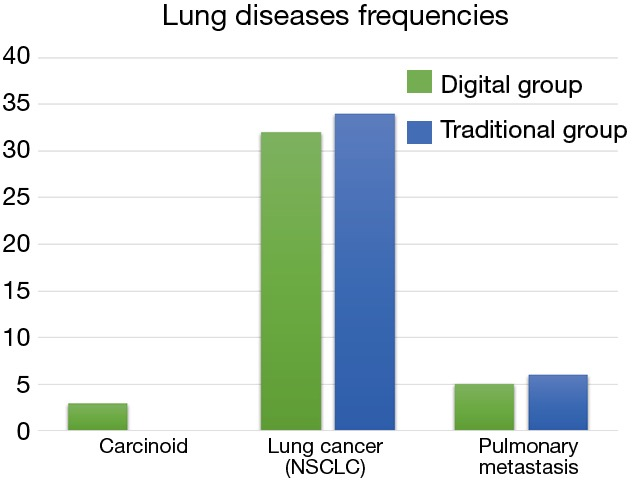 Both series of patients were comparable for clinical, surgical and pathological characteristics (Table 1).

Figure 3A and 3B showed the differences in terms of chest tube duration and length of hospital stay amongst the two groups. In particular, chest tube duration showed to be significantly shorter in DD (3 vs. 4 days, P=0.0009, Table 2), and the hospitalization was longer in TD (8 vs. 7 days in DD; P=0.0385).

Figure 3 Differences in outcome of interest between the two groups in term of (A) chest tube duration and (B) length of postoperative stay (days).

No chest drainage replacement was required at 30-day, in both groups.

Chest drainage duration after elective pulmonary resection mainly depends on the presence of ALs and/or the amount of pleural effusions. This has been shown to be one of the most important factors that may influence both overall hospital stay and costs (12,13). The lack of objective measures that may quantify ALs in the postoperative course and replicated amongst physicians has also contributed to prolong chest drains placement and overall hospital length of stay. The digital chest drains recent development markedly reduced interobserver variability in chest tube management, as reported in the literature (5).

Our study showed that patients receiving digital ALs evaluation experienced chest drains removal 1 day early than those treated with the traditional systems. Furthermore, the first were discharged from the hospital earlier than the second; no readmission was required in both groups due to chest drain replacement, as consequence of pneumothorax or pleural effusions. Similar results were also observed by Pompili et al. in a recent multicentric international study (10). Compared to our previous experience (9), in this study we used only one chest tube to drain the pleural space after elective pulmonary resection.

Our results are in line with those reported in the previous studies (6,8,10); only Lijkendijk et al. (11) did not found a difference in term of chest tube removal between DD and TD. The authors explained their results with the introduction of a strict algorithm and instructions for chest tube removal (for both traditional and digital ones), to be possible to decide the removal by the staff nurses without consulting the surgeons. We also elaborated very rigorous criteria for chest tube removal (in terms of pleural effusion amount, which was more severe compared to previous studies cut-off, and AL presence) but we found significative differences between the two systems. Those stringent criteria derived from our clinical experience (9) as well as on a learning curve on the use of digital devices.

The digital chest drainage superiority compared to the traditional one, in terms of standardization of chest tube management after elective pulmonary resections have been observed in the recent years (6,7,9). One of the most important innovations introduced by these devices is the dramatic reduction of the interobserver variability on AL presence/entity (5). The AL quantification (mL/min) using a digital air-flow meter, as well as the availability of recorded data for several hours, have increased the surgeon’s confidence in the security of chest drain management. By eliminating the subjective estimation and making available reproducible data, digital system drainages made the pre-removal drainage clamping (14) useless, as well as the need to place Heimlich valves (15).

Finally, the digital devices use made possible an early patient mobilization as well as an improved postoperative physiotherapy. This markedly reduced the risk of secretion retention and pneumonia.

We are aware that the present study has some potential limitations: first, the results were obtained in a General Thoracic Unit already experienced with digital drainages, even if the devices we used represent a technical evolution of others we adopted in a previous study (9). Nevertheless, the digital tube management was not totally new for us, and this might have influenced our results. Second, the lack of randomised design: this was a mono-institutional observational study the results of which, however, are completely in line with those previously reported in the literature, also in multi-institutional international ones. Finally, the study was not blinded for both patients and physicians: therefore, a possible bias in the postoperative drainage management between TD and DD could not be entirely ruled out.

In conclusion, we conducted a mono-institutional observational study on chest drainage management after elective pulmonary resections for lung malignancies. We tested a more sophisticated version of a previously used digital device, and we were able to demonstrate that patients managed with an electronic system experienced a shorter chest tube duration as well as a lower overall hospital length of stay, compared to those who received the traditional system. Future investigations concerning the possible variations in endopleural pressures may be useful to evaluate AL trends in the postoperative course after pulmonary resections.