Partial anomalous pulmonary venous drainage (PAPVD) is an anomaly of pulmonary venous drainage to the systemic circulation instead of the left atrium. Usually this is a right sided anomalous vessel that drains a part of the right lung, courses anterior to the hilum and pierces the diaphragm before draining into the inferior vena cava (1). The pattern of the pulmonary vein on the chest radiograph resembles a scimitar, a type of curved sword, hence the name (2).

We present an unusual case of partial anomalous venous drainage in which the vein of the right upper lobe drains into the superior vena cava, together with the azygos vein.

A 61-year-old woman was referred to the lung surgery department because of a central tumor of the right upper lobe. Her history stated chronic obstructive pulmonary disease and a Wolff-Parkinson-White syndrome for which she received an atrioventricular reciproke tachycardia ablation. She was recently diagnosed with pneumonia and in the work-up for this pneumonia a central tumor of the right upper lobe was diagnosed. A positron emission tomography-computed tomography (PET-CT) was made and an endobronchial ultrasound was performed, showing a cT1bN0M0 tumor. Pulmonary function tests showed a forced expiratory volume in 1 second (FEV1) of 1.52 L (57% predicted), a vital capacity of 3.61 L (116% predicted) and a CO diffusion of 45% predicted. Maximal O2 uptake during exercise was 1,011 mL/min (76% predicted), with a remarkably slow increase in O2 uptake after passing the anaerobic threshold, suggestive of an impaired increase in cardiac output. Predicted post-operative VO2 max was 13 mL/kg/min after lobectomy and 8 mL/kg/min after pneumonectomy. An ultrasound of the heart was performed and did not show any ventricular or atrial septal defects.

It was decided to perform a muscle sparing thoracotomy with resection of the tumor of the right upper lobe. During surgery a confluens between the azygos vein and the right upper lobe pulmonary vein draining in the superior vena cava was noted (Figure 1). Since the middle and lower lobe pulmonary veins were normally situated, a lobectomy of the right upper lobe was performed. Definitive pathology confirmed the clinical diagnosis. No further adjuvant treatment was given and recovery was without any complications. In retrospect the venous anomaly can be seen on the CT-scan, although it is not very clear (Figure 2). 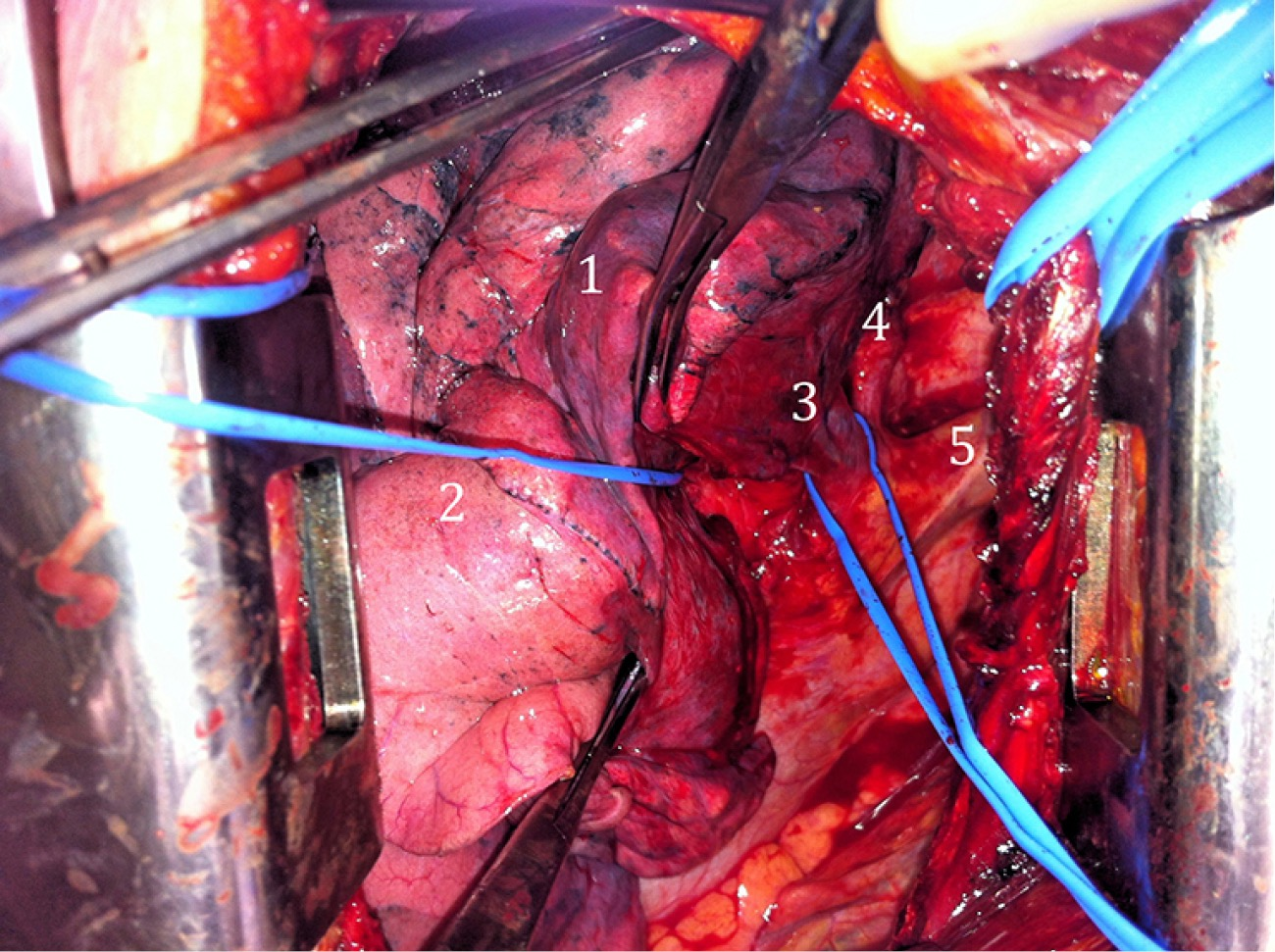 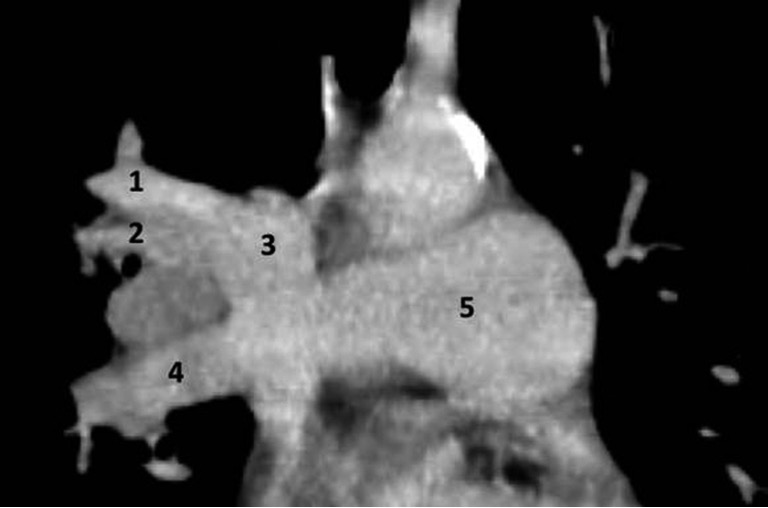 Post-operatively pulmonary function tests were repeated. She was limited in her ventilatory capacity due to the chronic obstructive pulmonary disease and the lobectomy. Therefore, we were not able to see if removing the shunt improved her limitations in exercise capacity.

Classic scimitar syndrome is a well described anomaly of total or partial right pulmonary venous drainage into the inferior vena cava instead of the left atrium. The clinical spectrum is wide. Dupuis et al. describe three forms: an infantile form associated with a large left-to-right shunt, pulmonary hypertension and significant symptoms, an adult form with a small shunt, no pulmonary hypertension and minimal symptoms and a form associated with congenital cardiac anomalies. He describes that most patients are asymptomatic and lead normal lives. Sometimes patients are slightly dyspneic at exertion (3). In the adult form pulmonary function studies show mild deficits in vital capacity and FEV1 (4). It may be associated with repeated pulmonary infections (1). In our patient, the impaired increase in O2 uptake during exercise may be caused by an impaired cardiac output due to a left-to-right shunt. It is unclear, however, to which extent this contributed to her complaints of exertional dyspnea, since the obstructive lung disease also played a role.

Partial anomalous pulmonary venous return to the azygos vein is rare; we describe a case in which this is discovered during lung surgery. It can give rise to recurrent pulmonary infections and changes in the results of pulmonary function tests. Especially when discovering this by accident during lung surgery it is important to realize the anatomical relationships, so a safe resection can be performed.