The standard surgical procedure for primary lung cancer is lobectomy with systematic lymph node dissection, and video-assisted thoracic surgery (VATS) has recently become more mainstream (1). It has been nearly 30 years since VATS lobectomy was initially reported (2). In Japan, approximately 70% of surgeries performed for primary lung cancer involve VATS, and the 30-day postoperative mortality rate is 0.3%, which is very safe (3). In recent year, the feasibility of VATS lobectomy for stage II (cN1) non-small cell lung cancer (NSCLC) has also been demonstrated (4). Although the surgical procedure for VATS lobectomy is established and widely performed, increases in both intraoperative bleeding and the operative time are sometimes encountered.

The sequence of vessel interruption during lobectomy remains controversial (4-6). One of the merits of firstly sealing the pulmonary veins is that it may prevent the outflow of tumor cells into the circulation and distant metastasis (5). However, it may also cause congestion of the lobe to be resected, resulting in increases in both intraoperative blood loss and the operative time (6). However, previous studies reported no significant differences in intraoperative blood loss and operative times between cases in which either the pulmonary veins or arteries were initially sealed (5,7). One of the reasons for this finding is that not only pulmonary arteries, but also bronchial arteries may cause congestion of the lobe to be resected after pulmonary vein sealing.

Bronchial arteries generally originate from the proximal descending thoracic aorta (8,9). Normal bronchial arteries are small, measuring less than 2 mm at their origin, receive only approximately 1% of the total cardiac output, and help maintain airway and lung function (10,11). They provide a systemic blood supply to the trachea, bronchi, bronchial branches, esophagus, visceral pleura, vasa vasorum of the thoracic aorta, and pulmonary arteries as well as to the nerves, pulmonary veins, and lymph nodes in the thorax (12). Bronchial arteries carry oxygenated blood to the lungs at a pressure that is six-fold higher than that in the pulmonary arteries. Therefore, highly vascularized bronchial arteries may contribute to bleeding during lung cancer surgery.

We present the following article in accordance with the STROBE reporting checklist (available at https://dx.doi.org/10.21037/jtd-21-616).

We retrospectively collected data on consecutive NSCLC patients who underwent resection at Tokushima University Hospital between January 2017 and December 2019. Patients who met the following criteria were included: pathologically confirmed stage I to IIIA NSCLC; no preoperative treatment; VATS lobectomy with systematic lymph node dissection; and complete curative resection. Patients with the following factors were excluded: no preoperative contrast-enhanced computed tomography (CT) or no arterial phase during contrast-enhanced CT, previous surgery on the ipsilateral thoracic cavity, the resection of surrounding tissue, simultaneous surgical procedures, and conversion from VATS to open surgery. The presence of interstitial lung disease was defined when CT findings showed ground-glass opacities, irregular linear opacities, honeycombing, or consolidation in the lung field. Clinicopathological, operative, and postoperative data were collected from a retrospective review of medical records. The Ethics Committee of Tokushima University Hospital approved the study protocol in March 2020 (No. 3672). The need for written informed consent was waived because of the retrospective study design. The study was conducted in accordance with the Declaration of Helsinki (as revised in 2013).

Contrast-enhanced CT images were acquired using a 16-slice multidetector CT (MDCT) scanner (Aquilion16; Toshiba Medical Systems Corporation, Tochigi, Japan; SOMATOM Sensation 16; Siemens, Erlangen, Germany) or a 320-slice MDCT scanner (Aquilion One; Toshiba Medical Systems Corporation, Tochigi, Japan). One hundred milliliters of iohexol (Omnipaque, 300 mg of iodine per milliliter; Daiichi-Sankyo Pharmaceutical, Tokyo, Japan) was intravenously injected at a rate of 3.0 mL/s, followed by an injection of 40 mL of saline solution. Arterial and equilibrium phase scanning was performed. In the arterial phase, scanning was initiated using a bolus-tracking method. The region of interest was set at the descending aorta, and the threshold for the CT value was 100 HU. When the CT value surpassed the threshold, scanning was automatically started and followed by equilibrium phase scanning 100 s after completion of the arterial phase. CT scanning was performed using the following parameters: gantry rotation speed of 0.5 s per rotation, 1-mm collimation for the 16-slice MDCT scanner and 0.5-mm collimation for the 320-slice MDCT scanner, 15 mm/s table increment with a helical pitch of 15, tube voltage of 120 kV, and tube current of 300 mA.

Measurement of the bronchial artery diameter

The identification and measurement of bronchial arteries were performed using commercially available software (Aquarius NET Viewer Version 4.4.11.265; TeraRecon Inc., San Mateo, CA, USA) (Figure 1A). In the arterial phase of contrast-enhanced CT, bronchial arteries leading to the lobe to be resected were identified. Artery diameters were measured at the point arising from the thoracic aorta (Figure 1B). On the right side, the artery was sometimes a common intercostal-bronchial artery trunk. Patients were divided into the following two groups based on bronchial artery diameters: ≤2 and >2 mm groups, since the diameter of the bronchial artery is usually 2 mm or less (10). 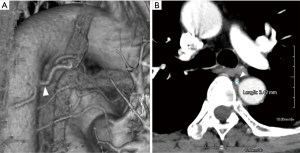 Patients underwent VATS lobectomy with systematic hilar and mediastinal lymph node dissection. A 1.5-cm camera port was created in the 8th intercostal space at the midaxillary line, a 4-cm working window for the surgeon in the 4th intercostal space at the anterior axillary line, and a 3-cm working window for the assistant in the 6th or 7th intercostal space at the posterior axillary line. Endostaplers were used to seal the pulmonary artery, pulmonary vein, and bronchus and divide the interlobar fissure, and small branches of the vessels were sealed with LigaSure (Medtronic, Minneapolis, Minn). The sequence of procedures was decided by each surgeon. Mediastinal lymph node dissection was achieved after lobectomy in all cases. The TNM classification was assessed according to the Union for International Cancer Control staging system, version 8.

GraphPad prism 5 software was used to analyze the linear correlations between intraoperative blood loss, operative time, and bronchial artery diameter. The Mann-Whitney U test was used to calculate the impact of bronchial artery dilation on intraoperative blood loss and the operative time. The chi-squared test was performed to compare categorical variables. Pearson’s chi-squared test or Fisher’s exact test was applied to verify relationships between the groups. A logistic regression analysis was used to identify prognostic risk factors. Potentially predictive variables were identified using a significance level of P<0.10 by a univariate analysis and were then subjected to a logistic regression multivariable analysis. All statistical analyses were performed using IBM SPSS Statistics (version 22; IBM Corp., Armonk, NY, USA). P<0.05 was considered to be significant. 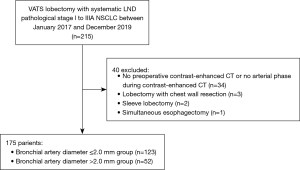 Surgeons and outcomes of surgery

Risk factors for intraoperative bleeding and prolongation of the operative time 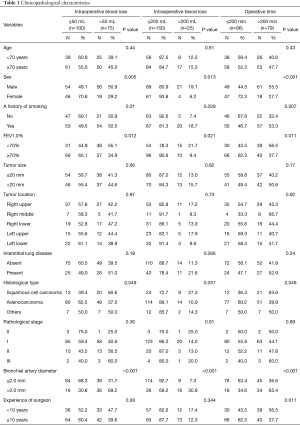 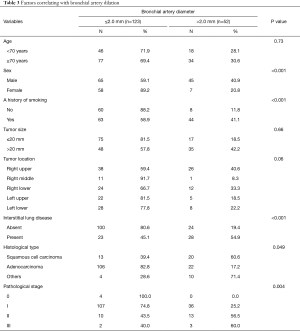 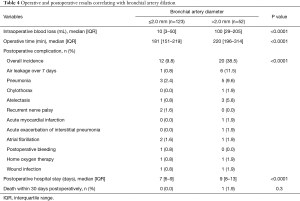 With advances in surgical techniques and devices, VATS has become a standard surgical procedure for lung cancer surgery (1). However, even thoracic surgeons with experience sometimes encounter unexpected intraoperative bleeding during VATS and, thus, the prolongation of operative times. The causes and incidence of intraoperative bleeding under 7 conditions are summarized by the International Interest Group on Bleeding during VATS Lung Surgery; bleeding from massive vessel injuries, bronchial arteries, vessel and bronchial stumps, lung parenchyma, lymph nodes, incisions, and the chest wall (13).

We herein focused on bronchial arteries because they supply blood to most intrathoracic tissues that may be incised or damaged during lobectomy and lymph node dissection. They provide a systemic blood supply to the trachea, bronchi, bronchial branches, esophagus, visceral pleura, vasa vasorum of the thoracic aorta, and pulmonary arteries as well as to the nerves, pulmonary veins, and lymph nodes in the thorax (12). In the present study, a bronchial artery diameter >2.0 mm was the only risk factor for intraoperative bleeding in the multivariate analysis, even though many surgeons with different years of experience were involved in surgery. This is the first study to show that hypervascularized bronchial arteries significantly increased both intraoperative blood loss and the operative time.

There are some limitations that need to be addressed. This was a retrospective study with a limited number of single-center cases. Furthermore, bronchial artery diameters were measured at the point arising from thoracic aorta. Right bronchial arteries often share their origin with an intercostal artery, a finding known as a common intercostal-bronchial artery trunk (8,9). Therefore, bronchial artery diameters may have been evaluated as being larger in cases with a tumor on the right side. Moreover, the present study did not consider ectopic arterial origins. Ectopic sites of origin include the subclavian artery, brachiocephalic trunk, thyrocervical trunk, internal mammary artery, and even a coronary artery (9,19,20).

In cases with highly vascularized bronchial arteries, intraoperative bleeding increases during VATS lobectomy with systematic lymph node dissection, the operative time is prolonged, and postoperative complications increases. A bronchial artery diameter >2.0 mm was identified as the independent risk factor for intraoperative bleeding in the multivariate analysis. Factors related to a bronchial artery diameter >2.0 mm were being male, a history of smoking, the presence of interstitial lung disease, squamous cell carcinoma, and an advanced pathological stage.

Reporting Checklist: The authors have completed the STROBE reporting checklist. Available at https://dx.doi.org/10.21037/jtd-21-616

Conflicts of Interest: All authors have completed the ICMJE uniform disclosure form (available at https://dx.doi.org/10.21037/jtd-21-616). H Takizawa serves as an unpaid editorial board member of Journal of Thoracic Disease from Feb 2021 to Jan 2023. The other authors have no conflicts of interest to declare.

Ethical Statement: The authors are accountable for all aspects of the work in ensuring that questions related to the accuracy or integrity of any part of the work are appropriately investigated and resolved. The study was approved by the Ethics Review Board of the Tokushima University Hospital (approval number 3362). The need for written informed consent was waived because of the retrospective study design. The study was conducted in accordance with the Declaration of Helsinki (as revised in 2013).