Short-term and intermediate-term readmission after esophagectomy

In the United States, hospital readmission has become an important metric for healthcare quality (1) and has garnered the attention of national policy makers, particularly because readmissions are associated with poor outcomes and high costs (2). Of note, the Healthcare Readmissions Reduction Program (HRRP) has created financial incentives, such as penalties, for hospitals to reduce the rate of readmission within 30 days (1). Readmissions following esophagectomy are not infrequent—data from the past decade have found the 30-day readmissions rates range from approximately 6% to 11% (3-5)—and are associated with worse 90-day mortality (6) and long-term survival (7). However, to date, the frequency, type and predictors of readmissions following esophagectomy are not well characterized. Studies of short-term readmission are largely limited to older data and, to our knowledge, there are no national studies reporting detailed data on characteristics and predictors of intermediate-term readmissions (readmissions 31–90 days following esophageal resection).

We present the following article in accordance with the STROBE reporting checklist (available at https://dx.doi.org/10.21037/jtd-21-637).

The National Readmission Database (NRD) is one of the databases developed by the Healthcare Cost and Utilization Project (HCUP) to track patient discharge and subsequent readmissions (8). The data from the NRD is derived from the State Independent Databases (SID) and includes the discharge data from 27 states (8). The data in the NRD accounts for approximately 57.8% of the U.S. population and 56.6% of all hospitalizations in the U.S. Procedural and diagnostic codes related to esophagectomy were recorded in the NRD using the International Classification of Diseases (ICD) 9th edition for the years of study inclusion (8). The study was conducted in accordance with the Declaration of Helsinki (as revised in 2013). This retrospective study was approved by the Stanford University Institutional Review Board (IRB # 35143) and individual consent for this retrospective analysis was waived.

All patients who received an esophagectomy in the NRD from January 1st 2013 to September 30th 2013 and January 1st 2014 to September 30th 2014 were identified for inclusion. We used the ICD-9 procedural codes that were used in previous studies to define the esophagectomy cohorts (7,9). Additionally, we only focused on data from 2013 to 2014 in the National Readmissions Database as these were the last years that the NRD used ICD-9 coding. Patients were excluded if they had emergent surgery, died during the initial hospitalization, or if their operation was coded as being a same-day procedure. Currently, there is no outpatient esophageal resection procedure, so we excluded these patients to improve the accuracy of our analysis. Additionally, patients with any history of cancer were also excluded from this study due to the frailty of cancer survivors and the lack of information about the type of cancer the patient previously had. For certain variables a category of other/unknown was created for patients with missing data.

We evaluated the cohort of patients who received esophagectomy and stratified them into three subgroups: (I) patients who were not readmitted within 90 days, (II) patients who were readmitted in the short-term (0–30 days after discharge), and (III) patients who were readmitted in the intermediate-term (31–90 days after discharge). Comparisons of baseline characteristics and unadjusted outcomes were performed using the Kruskal-Wallis or one-way ANOVA tests for continuous variables and Pearson’s chi-square and Fisher’s exact test for discrete variables. Predictors of short-term and intermediate-term readmission were evaluated using multivariable logistic regression modeling that included variables felt to be relevant to readmission. These variables included: age, sex, median household income, insurance type, patient location, residency of state, length of stay, co-morbidity score (which was created by adding up the number of comorbidities listed for each patient), the All Patient Refined—Diagnosis Related Group (APR-DRG) risk of mortality (ROM) score, the APR-DRG severity of illness score, disposition of patients, use of rehab facility, as well as, the ownership, size, teaching status, and location of the hospital. Complications were determined using the “DXn” element in the NRD (8). 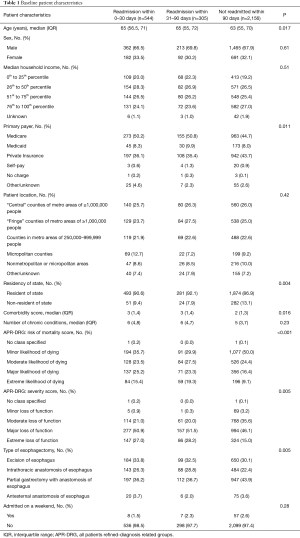 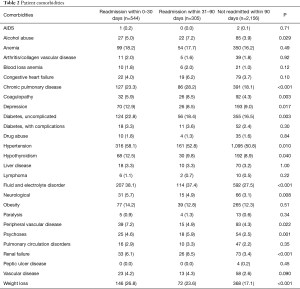 The majority of the cohort underwent an esophagectomy at a large, private (not-for-profit), metropolitan teaching hospital located in a large metropolitan area (Table 1). When compared to patients who were not readmitted within 90 days, there was a higher percentage of patients in the short- and intermediate-term readmissions group that were discharged first to a short-term hospital, skilled nursing facility, or intermediate care facility prior to being discharged home. The length of hospital stay was shorter for patients who were not readmitted within 90 days (Table 3). The majority of patients in our cohort were not transferred to different hospitals and did not require rehospitalization on the same day (Table 3). Most short- and intermediate-term readmissions were elective. The anastomotic techniques used are highlighted in Table S1. 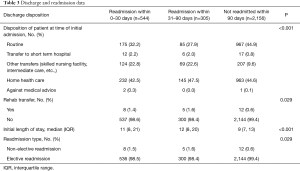 The three most common broad categories of complications resulting in short-term readmission were: gastrointestinal (28%), pulmonary (18%) and infectious (14.5%) (Table 4). In terms of specific, individual complications that were coded as the primary reason the patient was readmitted between 0–30 days following esophagectomy, the most common complications were post-operative infection (7.5%), dysphagia (6.3%), pneumonia (5.1%), bleeding (4.5%), dehydration (3.7%), aspiration pneumonitis (3.3%), and pain (2.9%). The ICD-9 diagnosis code used to define post-operative infection are detailed in Table S2. 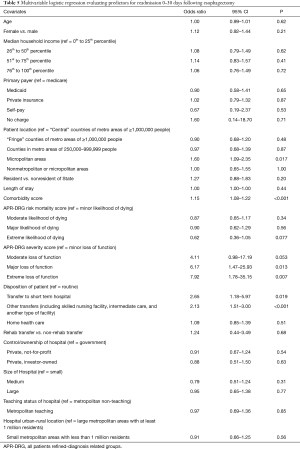 In this analysis of readmission patterns for patients who underwent esophagectomy, 18.1% of patients were readmitted in the short-term (less than 30 days) and 10.1% of patients were readmitted in the intermediate-term (31–90 days). The most frequent reasons for readmission were post-operative infection (7.5%), dysphagia (6.3%) and pneumonia (5.1%) for short-term time intervals. The most common intermediate-term complications were pneumonia (7.2%), gastrointestinal stricture/stenosis (6.9%) and dysphagia (5.9%). In multivariable analysis, being located in a micropolitan area, increasing number of comorbidities and higher severity of illness score were associated with an increased likelihood of having a short-term readmission while being discharged to a facility (as opposed to directly home) was associated with increased likelihood of both short- and intermediate-term readmission.

The short-term readmission rate of 18.1% in the present study is consistent with the rates of 6% to 21% reported in prior single- and multi-institutional studies and older national analyses (6,7,9-17), although it is slightly higher than that noted by the most recent national analyses of the American College of Surgeons National Surgical Quality Program and the National Cancer Data Base, which report a 30-day readmission rate of 6% to 11% (3-5). However, this discrepancy may be attributed to factors such as differences in surgeon experience, surgical technique, or hospital volume, as surgeon experience has been positively correlated with outcomes after esophagectomy (18).

The intermediate-term readmission rate in this study was 10.1%. To our knowledge, there has been only one other study by Stitzenberg et al. that has reported the rate of readmissions between 31 and 90 days following discharge (7). In that analysis of 1,573 esophagectomies for cancer recorded in the SEER-Medicare database (2001–2007), the rate of intermediate-term readmission was 12%, which was similar to our findings.

The study findings suggest that strategies to prevent readmissions will probably need to be adjusted throughout the pre- and postoperative period. For example, prevention of postoperative infection will require a multi-pronged approach, and will likely need to start in the preoperative period and include smoking cessation strategies and a plan to improve nutritional status. Common short-term readmissions due to pneumonia, aspiration pneumonitis and dehydration may be prevented, postoperatively, by avoiding oral intake and aspiration and ensuring an adequate hydration plan. To reduce a common cause of intermediate-term readmission such as stricture or gastric outlet obstruction, it is likely important to have close clinical follow up that focuses on swallowing or gastric outlet obstruction issues that could be identified with outpatient management. Other studies have also proposed the use of earlier follow-ups as a means to detect postoperative complications sooner so that complications can be addressed earlier or even treated in the outpatient setting instead of in the hospital (3).

A strength of using the NRD for this study is the ability to include large number of patients from an unbiased population-based database, with volume sufﬁcient to evaluate predictors of readmission. Another strength of this study was the analysis of not only short-term 30-day readmission, which has been previously reported, but also of intermediate-term (31–90 days) readmission. Of note, while there has been one study reporting the 31–90 days readmission rate following esophagectomy (7), this study is the first analysis to characterize complications and identify predictors associated with intermediate-term readmission. Finally, although several studies of readmission following esophagectomy have been performed, they mostly contain data from older time periods in the 2000’s (6,7,9-17); our study analyzes data from 2013 and 2014 and may be more representative of current trends and outcomes.

There are several limitations to this study, many of which are related to the limitations of the NRD. First, the NRD does not have information on what the esophagectomy was performed for. Presumably, the majority of esophageal resections in the database was for cancer, but the esophagectomies included in our analysis could have also been for benign disease. Second, there was no information on race, performance status, travel distance, staging, operative time, estimated blood loss, and other important preoperative and intraoperative variables that could impact postoperative outcomes and readmission. Third, there is no information to determine whether the readmission may have been caused by a complication that developed during the index admission. Fourth, there was no information on the extent of follow up care received by the patient after the initial discharge. Fifth, in our cohort, there was no data on several known complications of esophagectomy, such as anastomotic leak, respiratory failure leading to prolonged intubation, and reoperation. Sixth, because there was no data on overall survival, long-term outcomes were not able to be evaluated.

In this study, post-operative infection was the most common reason for short-term readmission. Dysphagia and pneumonia were common reasons for both short- and intermediate-term readmission of patients following esophagectomy. Interventions focused on reducing the risk of postoperative infection and pneumonia may reduce hospital readmissions. Gastrointestinal stricture and dysphagia were associated with increased risk of intermediate readmission and should be examined in the context of morbidity associated with pyloric procedures at the time of esophagectomy.

Reporting Checklist: The authors have completed the STROBE reporting checklist. Available at https://dx.doi.org/10.21037/jtd-21-637

Ethical Statement: The authors are accountable for all aspects of the work in ensuring that questions related to the accuracy or integrity of any part of the work are appropriately investigated and resolved. The study was conducted in accordance with the Declaration of Helsinki (as revised in 2013). This retrospective study was approved by the Stanford University Institutional Review Board (IRB # 35143) and individual consent for this retrospective analysis was waived.