Respiratory symptoms and health-related quality of life in post-tuberculosis subjects with physician-diagnosed bronchiectasis: a cross-sectional study

Tuberculosis (TB) remains a major global health burden (1). The treatment outcome of TB is highly effective, with a treatment success rate of approximately 90% (2). In contrast to the microbiologic cure, up to half of TB survivors suffer from lung function decline and lower quality of life (QoL) after TB treatment (3-6). Pulmonary impairment includes airflow obstruction as well as a restrictive ventilatory defect, which can be explained by TB-associated lung pathologies such as pulmonary cavitation, bronchiectasis, and fibrosis (4,7-10).

Patients with active TB have impaired QoL and its impact continues until the end of treatment (14-16). Although it is suggested that post-TB subjects may have persistent respiratory symptoms and lower QoL, especially in those who develop chronic lung disease such as bronchiectasis, there have been few studies regarding this issue.

Therefore, the aim of the present study was to investigate the prevalence of bronchiectasis among post-TB subjects and evaluate symptomatic burden in terms of respiratory symptoms and health-related QoL in these patients.

We present the following article in accordance with the STROBE reporting checklist (available at https://dx.doi.org/10.21037/jtd-20-3028).

This study was performed on data obtained from the Korea National Health and Nutrition Examination Survey (NHANES) from 2007 to 2009, a nationally representative health survey conducted by the Ministry of Health and Welfare. We used health-related questionnaires, health examinations, and spirometry results from the database. The presence of previous pulmonary TB was defined based on a history of physician diagnosis. Bronchiectasis was defined using the NHANES questionnaire on whether subjects had been previously diagnosed with bronchiectasis by physicians (17).

This study was conducted in accordance with the Declaration of Helsinki (as revised in 2013). This study was approved by the Institutional Review Board of Hallym University Kangnam Sacred Heart Hospital (application No. 2020-04-035). Informed consent was not required because this study was based on the NHANES database, which includes fully anonymized and de-identified data.

The association between bronchiectasis and respiratory symptoms was analyzed using logistic regression models and presented as an odds ratio (OR) and 95% CI. The first model was a crude model (Model 1); the second model was adjusted for age (categorized as ≥65 years old or not), sex, and BMI (Model 2); the third model was additionally adjusted for education level (categorized as high school or less vs. college or above) and family income (categorized as low or high) (Model 3). The association between bronchiectasis and perceived health status was also analyzed using logistic regression models. A linear regression model was used to assess the association between bronchiectasis, the EQ-5D index values, and other covariates as mentioned above, and presented as difference estimates and 95% CI. 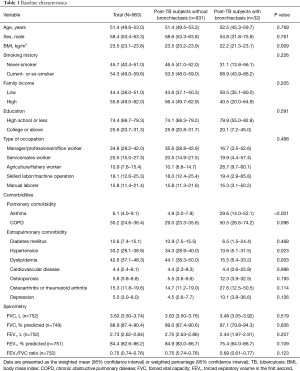 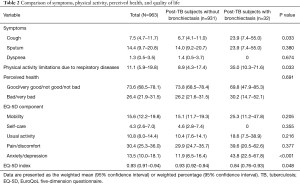 The impact of bronchiectasis on respiratory symptoms, physical activity and QoL among post-TB subjects

Bronchiectasis was associated with cough among post-TB subjects in the crude model (OR =4.33; 95% CI =1.01, 18.63; P=0.049); however, the association was not significant in the adjusted models. Additionally, based on logistic regression analyses, bronchiectasis was not significantly associated with sputum, physical activity limitations or a bad/very bad state of perceived health (Table 3). 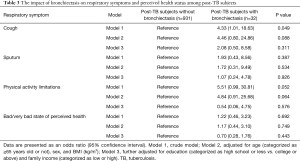 The major strength of this study is that it is the first to investigate the impact of bronchiectasis on QoL in post-TB subjects using nationally representative data. However, there are also several limitations to this study. Firstly, this study was performed in a representative sample of the Korean population. Thus, our data might not be generalizable to other ethnic groups or populations. Secondly, the Korea NHANES database did not provide chest CT data; therefore, we defined bronchiectasis based on physician diagnosis. Thus, we may have underestimated the prevalence of bronchiectasis. Thirdly, the number of post-TB subjects with bronchiectasis was relatively small, which may have led to a lack of statistical significance in respiratory symptoms and spirometry results.

Funding: This research was supported by the Hallym University Research Fund 2019 (HURF-2019-39); Basic Science Research Program through the National Research Foundation of Korea (NRF) funded by the Ministry of Science, Information and Communications Technologies (NRF-2019R1G1A1008692). The funder had no role in the design of the study, the collection and analysis of the data, or the preparation of the manuscript.

Reporting Checklist: The authors have completed the STROBE reporting checklist. Available at https://dx.doi.org/10.21037/jtd-20-3028

Conflicts of Interest: All authors have completed the ICJME uniform disclosure form (available at https://dx.doi.org/10.21037/jtd-20-3028). The authors declare no conflicts of interest.

Ethical Statement: The authors are accountable for all aspects of the work and ensure that questions related to the accuracy or integrity of any part of the work are appropriately investigated and resolved. This study was conducted in accordance with the Declaration of Helsinki (as revised in 2013). This study was approved by the institutional review board of Hallym University Kangnam Sacred Heart Hospital (application No. 2020-04-035). Informed consent was not required because this study was based on the NHANES database, which includes fully anonymized and de-identified data.