Tobacco smoking (TS) is proven a leading cause of morbidity and mortality worldwide. Prevalence rates of smoking are very high, about 20.2% of adults in the United States are current smokers (1). TS is a high risk factor for lung cancer, cause millions of death per year (2). Meanwhile, there is a high prevalence of TS in patients even with a lung cancer diagnosis (3), making them more likely to develop clinically drug-drug interactions (DDIs). This may relate to hepatic enzyme activity variation, one of the most important mechanisms involved in alteration of therapeutic response to drugs for treating lung cancer (4).

Cytochrome P450 (CYP) enzymes is a superfamily involved in the phase I drug metabolism of a variety of drugs, chemicals, and endogenous. It is widely expressed in liver, lung, intestine, kidney, heart, and brain (5,6). Approximately 75% of known therapeutic drugs are metabolized by members of the CYP1, CYP2, CYP3 families. Among them, CYP1A2, 2C9, 2E1 and 3A4 play a dominant role in the metabolism of drugs and other xenobiotics in human (7). The activity change of a certain kind of enzyme can result in differences in the plasma levels of substrate drugs, leading to DDIs. Cigarette smoke is known to have more than 4000 compounds, some of which are known poisonous and carcinogenic, such as nicotine, 4-(N-methyl-N-nitrosamino)-1-(3-pyridyl)-1-butanone (NNK), and polycyclic aromatic hydrocarbons (PAHs) (8). Additionally, previous studies showed that the constituents of TS can affect P450 cytochrome, resulting in alteration of the metabolism of certain chemotherapies and targeted therapies for lung cancer (9,10).

Up to now, the ‘Cocktail’ method is widely used to evaluate CYP450 enzymes activities for it can simultaneously reflect multiple isoenzyme activities, saving lots of the experimental time and cost (11). Studies of smoking effects on CYP450 enzymes are mainly focused on one or a part of CYP450 enzymes (12-14). Little is known concerning toxicological effects of smoking on the activity of CYP isozymes after long-term exposure time in laboratory animals. The purpose of this paper was to investigate the effect of long-term smoking on the activities and mRNA expression levels of CYP isozymes in rats. Activities of CYP1A2, CYP2C11, CYP2E1 and CYP3A1 were determined by pharmacokinetic parameters of four probe drugs: phenacetin, tolbutamide, chlorzoxazone and midazolam, respectively. In addition, real-time RT-PCR was used to analyze long-term smoking effect on the mRNA expression levels.

Male Sprague-Dawley rats ranging in weight from 180~200 g, obtained from Center of Experimental Animals, Wuhan University, were housed under controlled environmental conditions (23±1 °C and a 12-h light/dark cycle). Animals had free access to a commercial food diet and tap water. The studies were approved by the Animal Ethics Committee of Huazhong University of Science and Technology and were in accordance with the Guide for the care and Use of Laboratory Animals by National Institute of Health.

After complete the modeling, a cocktail solution at a dose of 5 mL/kg, which contained phenacetin (20 mg/kg), tolbutamide (5 mg/kg), chlorzoxazone (20 mg/kg) and midazolam (10 mg/kg) (Sigma-Aldrich Company) in CMC-Na solution, was administered orally to all rats in each group. Blood samples of each rat were collected as the following times: pre-dose (0 h) and then at 0.25, 0.5, 0.75, 1, 1.5, 2, 3, 4, 6, 8, 12, 24, 48 h after probe drugs administration through the tail vein and immediately separated by centrifugation at 13,000 rpm for 10 min to obtain plasma. The total volume of blood taken from each animal did not exceed 2.2 mL. A total of 100 µL plasma samples were transferred to a new tube and stored frozen at −80 °C until analyzed. Rats of smoking group and control group (n=4) were killed. Each liver sample was quickly removed and store at −80 °C.

Measurement of drug concentration in plasma

The quantification was performed by the peak-area method. The determination of target ions were performed in SIM mode (m/z 180 for phenacetin, m/z 271 for tolbutamide, m/z 167 for chlorzoxazone, m/z 327 for midazolam and m/z 237 for IS) and positive ion electrospray ionization interface. Drying gas flow was set to 6 L/min and temperature to 350 °C. Nebulizer pressure and capillary voltage of the system were adjusted to 20 psi and 3,500 V, respectively. The limits of quantification for phenacetin, tolbutamide, chlorzoxazone, and midazolam were 10, 20, 15 and 8 ng/mL.

The sample preparation was as follows: 0.2 mL acetonitrile with carbamazepine (500 ng/mL) as the internal standard was added to 0.1 mL collected plasma sample. After the tube was vortex-mixed for 1.0 min, the sample was centrifuged at 13,000 rmp for 10 min. Then 10 µL supernatant was injected into the LC-MS system for analysis. Each sample was tested in triplicate.

RNA was isolated using the RNAsimple Total RNA kit (TIANGEN BIOTECH CO., Ltd. Beijing, China) according to the manufacturer’s instructions. The concentration of RNA was determined, and isolated RNA quality was assessed by the 260/280 nm absorbance ratio (1.8~2.0). The RNA pellet was stored at −80 °C until assay.

The 2 µL RNA was converted to cDNA in a 10 µL reaction mixture using PrimeScriptTM RT Master Mix (Takara Bio Inc., Japan) according to the manufacturer’s instructions. Resulting reverse transcription products were stored at −20 °C until use.

The 10 µL cDNA was diluted with RNase Free ddH2O to a volume of 100 µL. Reactions were performed in a final volume of 10 µL which contained SYBR® Premix Ex TaqTM 5 µL, 1 µL diluted cDNA, 0.2 µL forward primer (10 µM), 0.2 µL reverse primer (10 µM), and 3.6 µL RNase Free ddH2O. PCR was carried out in a light cycle 480 RT-PCR system (Roche Diagnostics Ltd, Rotkreuz, Switzerland). The sequences of primers for real-time RT-PCR are shown in Table 1. The amplification conditions were as follows: initial denaturation at 95 °C for 30 s, followed by 45 cycles of denaturation at 95 °C for 5 s, annealing at 60 °C for 30 s. The relative mRNA expression of control and long-term smoking groups were calculated by using the 2–∆∆CT method.

The pharmacokinetic parameters of each probe drug were analyzed by The Drug and Statistics Software (DAS, Version 3.0, Mathematical Pharmacology Professional Committee of China, China). The results are expressed as mean values ± SD. Statistical analyses were determined using analysis of variance (ANOVA), followed by Dunnett t-test (2-sided). Significance of the expression of mRNA was calculated by a two-tailed, two sample t-test that assumed equal variance. A P value of <0.05 was considered significant. 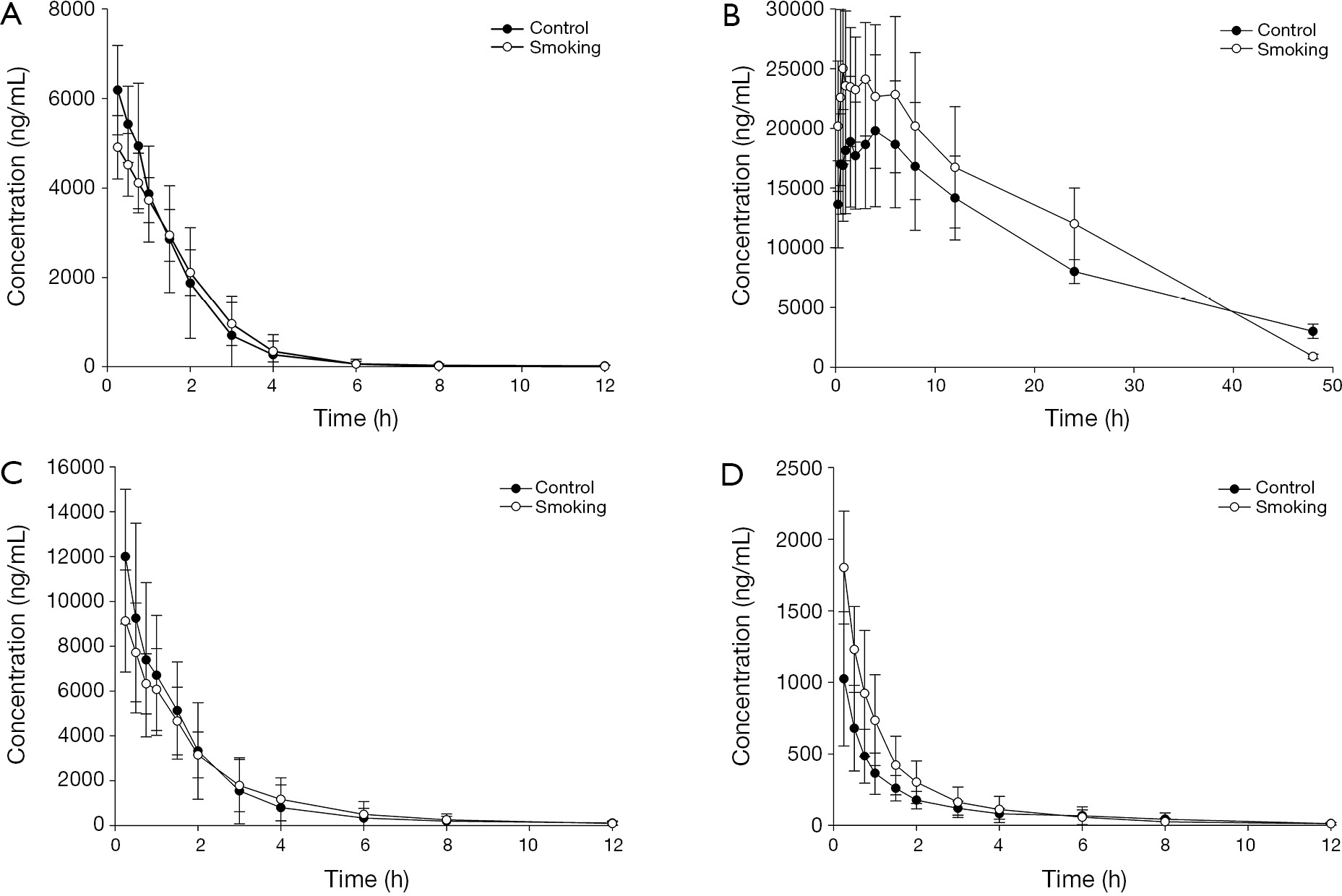 Figure 1 Time course of mean concentrations of (A) phenacetin, (B) tolbutamide, (C) chlorzoxazone, and (D) midazolam in plasma after a cocktail solution administration (n=6, mean ± SE). 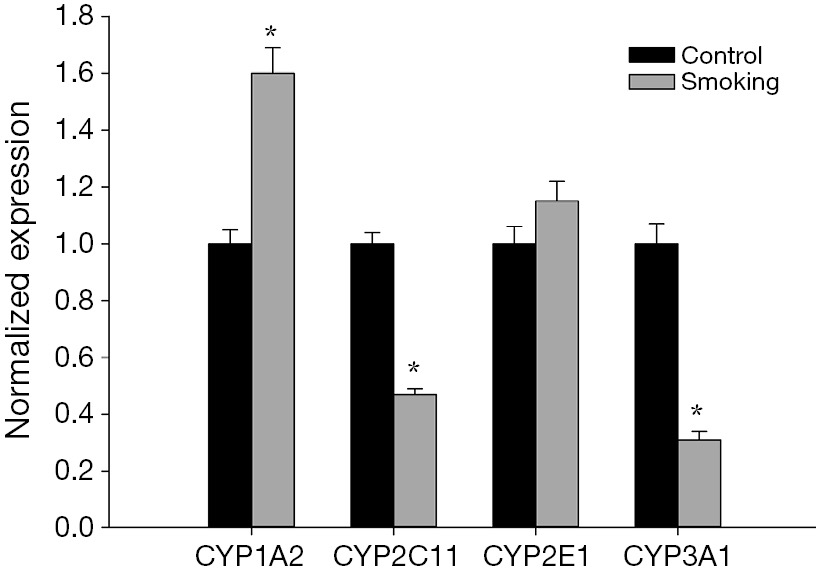 Compared to traditional method, the “Cocktail” probe drugs approach can simultaneously investigate activity alteration of multiple CYP450 enzymes. The most advantage is to minimize individual differences and the experimental time and cost. Thus, it has been more and more widely used for detecting potential DDI in vivo (11). The cocktail method was successfully used to detect the effect of long-term smoking on various CYP isoforms activities.

The most common isoforms which play an important role in the metabolism of used systemic therapy for lung cancer include CYP1A2 and CYP3A4 (10). CYP1A2 is almost exclusively expressed in the liver. It is involved in the bioactivation of diverse procarcinogens as well as metabolism of many drugs including flutamide, caffine, and theophylline (15). Previous studies have reported that increased expression and activity of CYP1A2 were observed in different tissues of mice after exposure to cigarette smoke (16,17). In smokers, plasma concentrations of many prescribed drugs metabolized primarily by CYP1A2 were lower than nonsmokers. In our work, CYP1A2 enzyme activity was induced significantly by long-term smoking, which is consistent with known reports (18-20). Increased CYP1A2 enzyme activity can fasten elimination of substances and reduce serum drug concentrations contribute to treatment failure, elucidate a possible mechanism of variability in survival for lung cancer patients based on smoking status.

CYP3A4 plays a major role in the metabolism of several clinically used drugs and systemic therapies for lung cancer, such as gefitinib and taxanes (21). According to our results, CYP3A1 can be inhibited significantly by long-term smoking in rats. Therefore, it indicates the possible inhibition of CYP3A4 activities in smokers, which may cause slowed clearance and altered concentrations in plasma of drugs metabolized primarily by CYP3A4. The clinical implication of this is drug toxicity. Thus, much attention should be paid to smokers receiving drugs used to treat lung cancer. It is worth noting that some studies have demonstrated that short-term smoking increased CYP3A1-mediated enzyme activity in animal models (22). In addition, in some in vivo studies, smoking has also been reported to induce CYP3A (23-25). However, our study shows that after 180 days of toxication, hepatic 3A1 activity was decreased, probably because effects of smoking on the activity of CYP3A1 is dependent on the duration of toxication.

In conclusion, our results demonstrated that long-term smoking can result in the increase activity of CYP1A2, as well as the decrease activity of CYP2C11 and CYP3A1 in liver. Since CYP1A2 and CYP3A4 are closely related to the metabolism of those often used drugs for lung cancer, suggesting that long-term smokers in the setting of a lung cancer diagnosis require drug dosage adjustment to avoid DDIs that may occur.