Obstructive hypertrophic cardiomyopathy (HCM) is characterized by left ventricular outflow tract (LVOT) obstruction and diastolic dysfunction, which are the main causes of symptoms in many patients. In most symptomatic patients with obstructive HCM, appropriate management of the LVOT obstruction leads to a dramatic improvement of the symptoms. Septal myectomy is one of the most favorable options for the management of LVOT obstruction (1-3). The abnormal ejection hemodynamics are corrected immediately after myectomy. Septal myectomy showed excellent long-term outcomes in patients with obstructive HCM whose symptoms were refractory to maximal medical treatment (4,5).

The improvement of symptoms following septal myectomy may also be due to improvements of diastolic functions. Indirect data derived from imaging studies suggested decreased left atrial pressure (LAP) and pulmonary pressure after myectomy (6-12). However, the intrinsic relaxation of the left ventricle (LV) was not studied. Due to the complex diastolic hemodynamics in the presence of LVOT obstruction, estimates of the myocardial relaxation of the LV using a noninvasive approach were less reliable (13-15).

We present the following article in accordance with the STROBE reporting checklist (available at https://dx.doi.org/10.21037/jtd-21-902).

The study was conducted in accordance with the Declaration of Helsinki (as revised in 2013). The Institutional Review Board of Fuwai Hospital approved this study (NO. 2019-1206). All patients signed informed consents for the use of their data for research. Catheter examinations were performed approximately one week before the extended septal myectomy. Patients who voluntarily participated in a postoperative study came back to our institute for 3 to 6 months after surgery. Twelve patients completed preoperative and postoperative cardiac catheterization. Figure 1 shows the flowchart of this study. 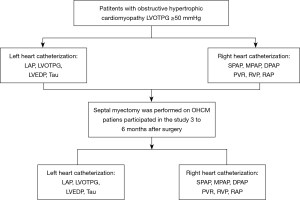 Exclusion criteria: (I) the patient had a catheter examination within 1 month; (II) Contraindications for catheterization, such as stenosis or occlusion of peripheral arteries; (III) patients needed concomitant cardiovascular surgery at the time of septal myectomy or had prior cardiovascular surgeries; (IV) prior alcohol septal ablation; and (V) patients with coronary heart disease.

Continuous variables are presented as the means ± standard deviation or the median (interquartile range). The normality of data was tested with the Kolmogorov-Smirnov test. One-way analysis of variance was used to compare continuous variables between groups. The Kruskal-Wallis test was used for nonnormally distributed variables. Categorical data are expressed as the percentage frequency and were compared using the χ2 test or Fisher’s exact test. Statistical analyses were performed using SPSS software (IBM SPSS Statistics for Macintosh, version 22.0; IBM Corp, Armonk, NY, USA). A P value <0.05 was considered statistically significant.

A total of 32 patients had preop study over the 8 months following the first enrollment. However, only 12 patients came back for postoperative test. Twelve patients met the inclusion criteria and agreed to be included in the study. Preoperatively, all patients exhibited medically refractory symptoms. Symptoms and NYHA class significantly improved after septal myectomy surgery. There was no significant difference in pre-myectomy and post-myectomy heart rate or hemoglobin level. No medication changes was made between the two cardiac catheterizations.

As previously described (9), a modified Morrow procedure was applied in this study. The weight of the myocardium removed was 12±6.7 g. None of the study patient died during hospitalization or follow-up, and none required MV replacement. Non had postoperative constrictive pericarditis or other complication. The average time from surgery to postoperative echocardiography was 4.7±1.4 months. Septum thickness decreased from 21.4±4.5 mm before surgery to 11.8±4.7 mm after surgery (P=0.03). The resting pressure gradient decreased from 69.5±23.7 mmHg before surgery to 8.3±1.6 mmHg after surgery (P<0.001). The baseline clinical characteristics and the clinical outcomes in the 12 study patients are summarized in Table 1. 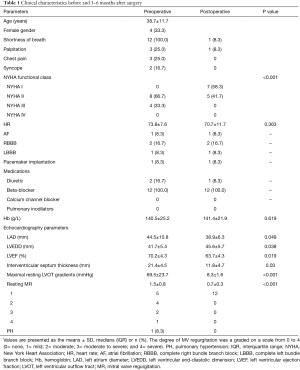 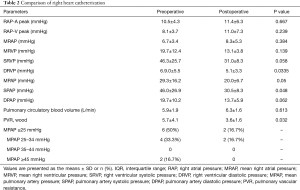 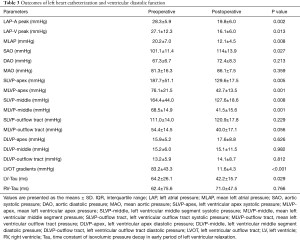 The outcomes of cardiac catheterization on ventricular diastolic function 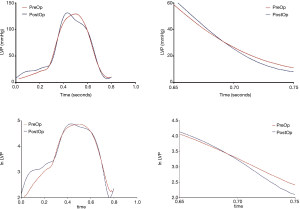 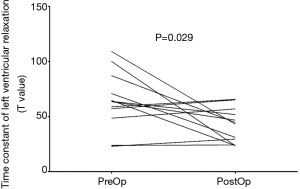 Figure 3 Change of tau value at a 3-month follow-up. The tau value decreased overall at follow-up and the decrease is especially significant in those who have a large tau value before myectomy. 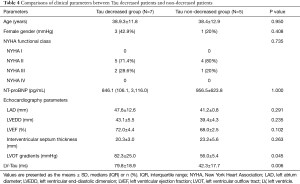 The present study investigated diastolic function using catheterization in patients with obstructive HCM before and after septal myectomy. The pressures of the left and right hearts were thoroughly investigated via direct measurement. The filling pressure and myocardial relaxation were significantly improved following myectomy, which are consistent with prior studies that showed a decrease in left atrial (LA) size (7-9), improvement of pulmonary artery hypertension (10-12), and reverse remodeling of the LV (9,19). The results from the present study suggested that improvement of the diastolic function may be an important reason for the increased functional capacity following myectomy in patients with obstructive HCM, by improving cardiopulmonary function and NYHA.

LVOT obstruction is the main cause of symptoms in patients with HCM. For patients who are refractory to medical treatment, septal myectomy produces an excellent effect on the improvement of functional capacity and survival (1-5). An intraoperative hemodynamic study showed that the improvement of functional capacity may be due to the relief of obstruction and the increase in stroke volume (20). Many studies also showed that septal myectomy was associated with the improvement of diastolic function using an imaging approach (6-9). The method of evaluating diastolic function using imaging was derived from simpler hemodynamic circumstances and may not apply to the complex hemodynamics in patients with obstructive HCM (13-15). For example, Doppler echocardiographic estimates of left ventricular filling pressure using transmitral flows and mitral annular velocities modestly correlate with direct measurements of LAP (13).

Notably, the LA pressure and LV filling pressure decreased following septal myectomy, which were reported in many studies using different methods. Improvement of mitral valve regurgitation and increase in forwarding stroke volume significantly decrease the LA congestion. However, the improvement of myocardial relaxation was not well determined due to methodological limitations. Sorajja et al. found a variable effect of septal ablation on myocardial relaxation in patients with HCM (21). However, the postoperative measurements were performed during the ablation procedure and may have been affected by the acute myocardial necrosis. Postoperative measurements in the present study were performed three to six months after myectomy, when the hemodynamics and myocardium had recovered from the acute surgical phase. The data showed a decrease in the Tau value after myectomy, which indicates an improvement in LV relaxation. Several changes after myectomy may induce the improvement. Myocardial ischemia has a vital impact on the Tau value, and it is present in many patients with HCM (22). The relief of LVOT obstruction considerably decreases the oxygen consumption of the myocardium. These factors together contribute to the improvement of myocardial ischemia and stiffness. Thinning of the ventricular septum may be another reason for the improvement of myocardial relaxation. The LV in patients with obstructive HCM is generally characterized by asymmetric hypertrophy, which predominantly presents as septal hypertrophy, especially basal septal hypertrophy. This hypertrophy is an important cause of the LV systolic and diastolic dysfunction. Septal myectomy may improve global LV compliance by thinning the thickest part of the LV, which was demonstrated by the echocardiographic data in the present study and prior studies (9,19,23). There was a regression in the left ventricular hypertrophy following myectomy. A prior study also showed a continuous decrease of N-terminal pro-brain natriuretic peptide months after myectomy (24). Therefore, the reverse remodeling of the LV may also contribute to the improvement of diastolic function.

Our results showed that the 7 patients with higher preoperative Tau had their Tau reduced significantly postop. And the 7 patients with decreased Tau seems to have higher LOPTPG before surgery. In 5 patients, Tau did not change significantly due to a relatively lower baseline value. We speculate patients with worse diastolic function and higher LOPTPG may benefit more from myectomy surgery, and the Tau decreased more significantly postoperatively. We conclude that septal myectomy decreased the Tau, especially in those who had an increased baseline Tau. Though we need to prove our speculation by increasing the sample volume.

There were several limitations in the present study. The study size was relatively small, which limited the power of the conclusions. Patients voluntarily decided whether to undergo the postoperative study, so the comparison was done in only 12 patients. There may be a selection bias in sampling.

Patients with obstructive HCM have improved diastolic function following septal myectomy, especially in those who had an increased baseline Tau. The improvement was indicated by decreased LA and LV filling pressures and improved LV relaxation. Cardiac output and pulmonary vascular congestion were also improved.

Reporting Checklist: The authors have completed the STROBE reporting checklist. Available at https://dx.doi.org/10.21037/jtd-21-902

Conflicts of Interest: All authors have completed the ICMJE uniform disclosure form (available at https://dx.doi.org/10.21037/jtd-21-902). The authors have no conflicts of interest to declare.

Ethical Statement: The authors are accountable for all aspects of the work in ensuring that questions related to the accuracy or integrity of any part of the work are appropriately investigated and resolved. The study was conducted in accordance with the Declaration of Helsinki (as revised in 2013). The study was approved by The Institutional Review Board of Fuwai Hospital (NO.2019-1206) and informed consent was taken from all the patients.