Because of the widespread use of lung computed tomography (CT) increasing numbers of small pulmonary nodules are detected. Some previously published studies have shown that, for small pulmonary nodules, the prognosis of segmentectomy is no worse than that of lobectomy (1-4). Anatomic precise segmentectomy can be used as a treatment option for benign nodules or early lung cancer (5,6).

Anatomic variations of the pulmonary artery make pulmonary segmentectomy more difficult than standard lobectomy. Therefore, surgeons must have a comprehensive and accurate understanding of the models of pulmonary artery, including rare anatomical variations. This is important for the safe and accurate completion of pulmonary segmentectomy. However, without a good understanding of the artery anatomical model and the various variations, it is difficult to understand pulmonary artery anatomy. Traditional methods, such as autopsy (7,8) and 2D computed tomography (2DCT) (9) have been used to understand the anatomy of the lung. The anatomical structure of the lung was analyzed by some scholars in the 1940s and 1950s using cadavers (7,8). However, this has some shortcomings, such as complex operation, the low number of cadavers, and abnormal physiological state of the lungs of cadavers. 2DCT cannot truly reproduce the 3D structure of lung anatomy (10).

With the development of medical technology, 3D reconstruction of the anatomical structure of the pulmonary artery, based on preoperative lung CT data, can be a good guide for surgery (11). The physiological state of pulmonary vessels and bronchi can be observed by 3D CT angiography and bronchography (3D-CTAB).

However, the anatomic variations of the artery are still controversial, particularly with respect to branching of the lingular artery (7,8,12-15). There have been few studies on the left upper lobe (LUL) pulmonary lingular artery model.

The purpose of the present study was to describe variations and frequencies in the LUL pulmonary lingular artery model using CT angiography and 3D reconstruction so as to assist thoracic surgeons with LUL segmentectomies. We present the following article in accordance with the STROBE reporting checklist (available at https://dx.doi.org/10.21037/jtd-21-1141).

A total of 166 patients with left pulmonary lesions, and with no history of left pulmonary resection, were included in the present study from January to December 2020. The study was undertaken at the Department of Thoracic Surgery, Fujian Medical University Cancer Hospital, Fujian Cancer Hospital. All patients underwent 3D reconstruction before surgery, including segmentectomy and subsegmentectomy (Figure 1).

Nomenclature of the pulmonary artery

The study was conducted in accordance with the Declaration of Helsinki (as revised in 2013). The study was approved by ethics board of Fujian Medical University Cancer Hospital, Fujian Cancer Hospital (NO.: 2017-050-01) and individual consent for this retrospective analysis was waived.

A total of 166 patients (72 males and 94 females), were enrolled in the present study from January to December 2020. The median age was 57 years (range, 25–85 years). All patients underwent segmentectomy or subsegmentectomy after 3D reconstruction. 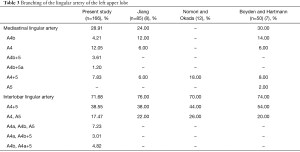 Thoracic thin-section CT has led to an improved detection rate of small lung lesions. Some previously published studies have shown that, for metastatic lung tumors, benign nodules, or early lung cancer, the prognosis of segmentectomy is no worse than that of lobectomy (1-4,18-21). The JCOG0802 study, which compared segmentectomy and lobectomy in patients with invasive peripheral non-small cell lung cancer tumors with a maximum diameter ≤2 cm, showed that segmentectomy had a higher rate of air leakage (6.5% vs. 3.8%, P=0.04), but there was no difference in other complication rates (5). The JCOG0804 study evaluated the efficacy and safety of sublobar resection for ground-glass opacity-dominant peripheral lung cancer with a maximum tumor diameter ≤2 cm and consolidation tumor ratio ≤0.25 (6). The findings of the JCOG0804 study indicated that sublobar resection should be the preferred surgical procedure. In addition, pulmonary segmentectomy is a surgical option for patients who were unconditionally undergoing standard lobectomy (22).

Because of the anatomic variations of the artery, thoracic surgeons must be familiar with artery anatomy and its variations in order to successfully perform segmental pulmonary resection. It is well known that the most common variation is a mediastinal lingular artery (16,23,24). However, further specific classification and occurrence probability are rarely mentioned in previously published reports.

In the present study, based on 3D-CTAB reconstruction, the segmental and subsegmental lingular arteries of the LUL were studied and classified in detail. The present study is a systematic radiological analysis of the lingular artery of the LUL following 3D-CTAB reconstruction, and highlights the differences between our results and those of previous reports. The pulmonary parenchyma and pulmonary bronchus significantly interfered with the anatomical analysis of the arterial variation pattern. However, 3D-CTAB reconstruction prevented interference to images of lung tissue and blood parenchyma, and allowed a 360-degree view of the artery branching without blind spots.

In the present study, according to the number of lingual artery, it can be divided into 3 types. We found 3 lingular arteries was in 8.43% of cases, which was not found by Cory and Valentine, Fourdrain et al., and Dejima et al. (13-15). The interlobar upper division arteries and interlobar lingular arteries were common trunk in 10.89% of cases, which was significantly lower than that reported by Cory and Valentine (17.8%) and Fourdrain et al. (20.5%) (13,14). Our study differed from previous studies in the number of lingual artery. The possible reason was that in this study, we used thin-section enhanced CT, coupled with advanced 3D reconstruction technology, which made the data more accurate and closer to the actual anatomical situation. Therefore, when we performed lingular segmental resection, it was important that attention was paid to the fact that a few patients have multiple lingular segmental arteries, which need to be removed individually to prevent bleeding or incomplete pulmonary segmental resection.

The interlobar lingular artery was observed in 119 cases (71.68%) in the present study; A4a, A4b, and A5 in 7.23% cases; A4a and A4b+5 in 3.01% cases, and A4b and A4a+5 in 4.82% cases. These anatomical variations have not been reported previously, but the situation was common in the present study. Therefore, care needed to be taken when performing lingual pulmonary segmentectomy. For example, when we performed S5 segmentectomy, A4a or A4a, which is co-stem with A5, need to be protected. Moreover, the most common anatomic variant of the interlobar lingular artery was A4+5 (70–80%) in previously published studies, which was similar to the findings of the present study (7,8,12).

Our study had some limitations. First, we only used 3D-CTAB data. Therefore, it is possible that small arteries may have been missed, which may have biased our results from real anatomical findings. Second, the sample size of the present study was small. A large sample study is needed to confirm the results.

We identified various lingular artery branching patterns of the LUL with 3D-CTAB in patients. 2D-CTAB is useful for finding variations. We believe that the findings of the present study can be useful for thoracic surgeons when undertaking segmental and subsegmental pulmonary resections.

Reporting Checklist: The authors have completed the STROBE reporting checklist. Available at https://dx.doi.org/10.21037/jtd-21-1141

Conflicts of Interest: All authors have completed the ICMJE uniform disclosure form (available at https://dx.doi.org/10.21037/jtd-21-1141). The authors have no conflicts of interest to declare.

Ethical Statement: The authors are accountable for all aspects of the work in ensuring that questions related to the accuracy or integrity of any part of the work are appropriately investigated and resolved. The study was conducted in accordance with the Declaration of Helsinki (as revised in 2013). The study was approved by ethics board of Fujian Medical University Cancer Hospital, Fujian Cancer Hospital. (NO.: 2017-050-01) and individual consent for this retrospective analysis was waived.