Rhinitis is very common worldwide. Approximately two thirds of cases have been diagnosed as allergic rhinitis (AR) and the remaining as non-allergic rhinitis (NAR) (1-4). Asthma has also been a common respiratory disease, with more than 30 million cases globally (5). AR has been associated with the development of asthma (6), possibly because of their similar underlying inflammatory responses. The link between AR and asthma, in terms of underlying causes, pathophysiology and intervention approaches, has been increasingly recognized (7). Approximately 80% of patients with asthma also have rhinitis (1). The integrity of airway inflammation has been elaborated in the guideline, Allergic Rhinitis and its Impact on Asthma (1,8,9). This guideline recommended the combination therapy for upper and lower airways in patients with AR and asthma, which reinforced the theory of “one airway, one disease” (10).

However, there have been a paucity of literature reports on NAR, possibly due to the complex and poorly recognized mechanisms. In a multinational cross-sectional study (ECRHS study) investigating the association between rhinitis and asthma, Leynaert and his associates found that rhinitis (AR and NAR) was a risk factor of asthma development, even adjusted for the factors of serum total IgE levels, parental history of asthma and allergen sensitization (11). But it should be recognized that the association between NAR and asthma has not been clearly delineated. In a large-scale longitudinal study, Shaaban and his colleagues found that NAR was associated with asthma development (12). These studies offered significant clues to investigate the impacts of NAR on the lower airways. Many studies have indicated that patients with NAR present asthma and that the inflammation of the airways may be associated with eosinophils (13). However, little is known about lower airway inflammation and responsiveness in patients with NAR without asthma.

Asthma is a chronic airway disease characterized by mucosal inflammation, airway hyperresponsiveness (AHR) and reversible airflow limitation. The lower airway inflammation, as evidenced by induced sputum eosinophilia (14), airflow limitation, non-specific airway hyperresponsiveness (15) and (or) increased levels of fractional exhaled nitric oxide (FeNO) (16), has been shown in patients with AR alone and those with asthma.

Between June 2008 and December 2012, we recruited subjects from the department of Otolaryngology, Head and Neck Surgery, Nanjing Jinling Hospital (n=360) and First Affiliated Hospital of Guangzhou Medical University (n=279) consecutively. All subjects were never-smokers. Based on ARIA 2008 criteria (1) and a study by Shaaban et al. (12), patients who had typical nasal symptoms (rhinorrhoea, sneezing, nasal blockage and/or itching, nasal mucosal swelling) were allocated to rhinitis group. Those with positive skin prick test (SPT) findings to the panel of allergens (see below) were defined as AR (n=377), those with negative SPT were defined as NAR (n=262). Nasal polyps and chronic rhinosinusitis were excluded following nasal endoscopy and (or) nasal CT in all patients.

Healthy subjects, free from nasal symptoms, were recruited from the Health Check-up Center. These subjects had no abnormality of physical examinations, blood routine test, chest roentgenography, spirometry and allergen SPT.

For all subjects, the exclusion criteria were: (I) a history of asthma (diagnosed by respiratory physicians), wheezing, chronic cough or other chronic respiratory diseases; (II) acute upper respiratory tract infections within 8 weeks; (III) a history of nasal or facial trauma; (IV) significant nasal septum deviation under endoscopic examination; (V) pregnancy or lactation.

The severity of rhinitis was assessed according to the ARIA 2008 guidelines, moderate-severe rhinitis was diagnosed as having one or more of the following items: abnormal sleep; impairment of daily activities, sport or leisure; problems caused at work or school; troublesome symptoms) (1). Rhinitis that did not fall into the “moderate-severe” category was rated as “mild”. 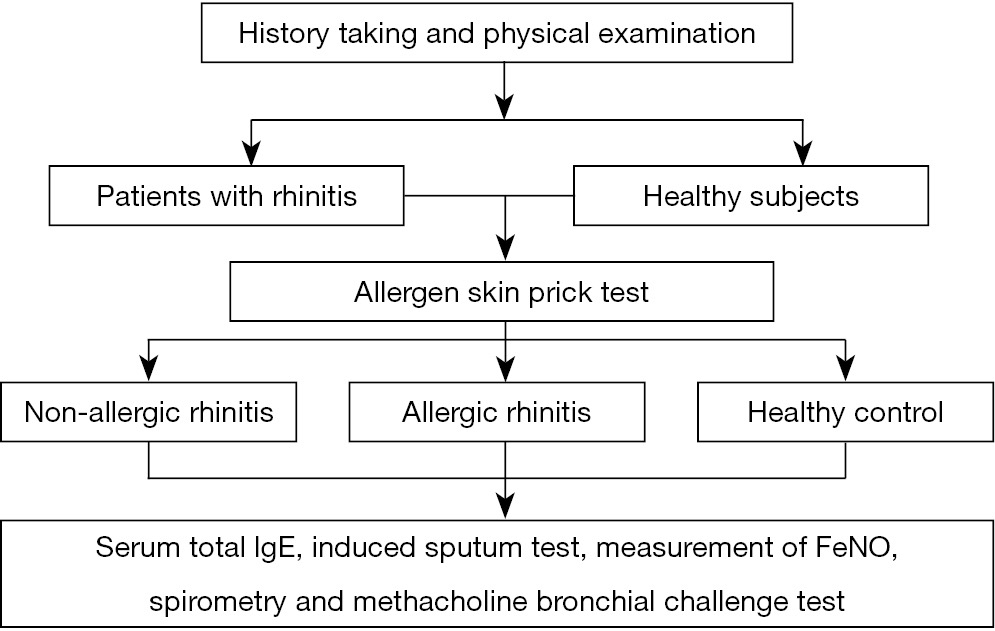 Following phlebotomy, blood samples were collected and sent to the central laboratory for measurement of IgE levels using the Phadiatop UniCAP 100 fluorescent assay instrument (Thermo Scientific Inc., USA). The level of IgE being greater than 150 IU/L was deemed as abnormal (18).

Measurement of FeNO was performed using portable NIOX Mino instruments (Aerocrine Co. Ltd., Sweden), based on international guidelines (19). Nitrogen-rich foods, cola, smoking and exercises were, if any, withheld for at least 2 hours. Subjects in a seated position were instructed to empty their lungs before deep inhalation of the gases free of nitric oxide to total lung capacity through a mouthpiece. This was followed by exhalation at constant airflow (50 mL/s) for 10 s, which entailed an automated program that calculated and displayed reading of FeNO, in parts per billion (ppb). The normative range of FeNO was between 5 and 25 ppb (20), therefore readings greater than 25 ppb were deemed abnormal.

Methacholine bronchial challenge test was, based on Yan’s protocol (23), performed with doubling doses of methacholine (Sigma Aldrich Co. Ltd., Ann Arbor, USA) diluents (0.078, 0.156, 0.312, 0.625, 1.25 mg) using the type TAR-1 hand-squeeze nebulizers (Viasys Co. Ltd., Guangzhou, China) (24). Spirometry was measured within 1 min of nebulization, which entailed recording of the FEV1 fall. Bronchial challenge was ceased in case of FEV1 fall being 20% or greater, or the maximal cumulative dose of methacholine (2.50 mg) had been administered. AHR was defined as 20% or greater fall in FEV1 (21).

Sputum induction was performed based on Chinese Guidelines for the Diagnosis and Management of Cough (25). Before sputum induction, subjects were instructed to fully empty their mouth to remove any cellular debris. Nebulization was conducted using 3%, 4% or 5% saline via ultrasonic nebulizers, as appropriate, with the duration of 5 min for individual concentrations. Following expectoration into clear sterile plastic pot, sputum plugs were weighed and treated with four aliquots of dithiothreitol to completely dissolve mucus. The mixture was subsequently vortexed, shaked and centrifuged to remove supernatants. Cell pallets were mounted on a glass slide for fixation with polyaldehyde and haematoxylin-eosin staining. Samples with 5% or fewer epithelial cells of total cell count were deemed eligible. This entailed counting of 400 non-squamous cells for cytology assessment. Sputum eosinophilia was defined as the proportion of eosinophils being 2.5% or greater (25).

All measurements were performed by designated research technicians who were blinded to study allocation.

As shown in Table 1, there were no significant differences in the height, sex, weight and BMI among the three groups. The proportion of patients was similar in AR and NAR.

The FVC and FEV1 predicted did not differ statistically among the three groups (both P>0.05). Compared with healthy subjects, patients with AR were characterized by significantly lower levels of FEV1/FVC, MMEFpred% and MEF25%pred% (all P<0.05), whilst those with NAR presented notably lower levels of FEV1/FVC, MMEFpred%, MEF25%pred% and MEF50%pred% (all P<0.05). However, the differences in spirometric indices between AR and NAR patients were not significant. Group AR had 46 cases of AHR and yielded the highest positivity rate (12.2%) of AHR, followed by group NAR (n=16, 6.1%) and healthy subjects (n=3, 1.1%) (P<0.05) (Table 2).

Induced sputum eosinophil count was numerically but not statistically higher in group NAR than in healthy subjects. There were no differences for induced sputum neutrophil count among three groups (Table 3).

The individual PD20FEV1 values of three groups were not plotted because we calculated these values in subjects with AHR only.

Correlation between airway inflammation and airway hyperresponsiveness (AHR) and spirometry 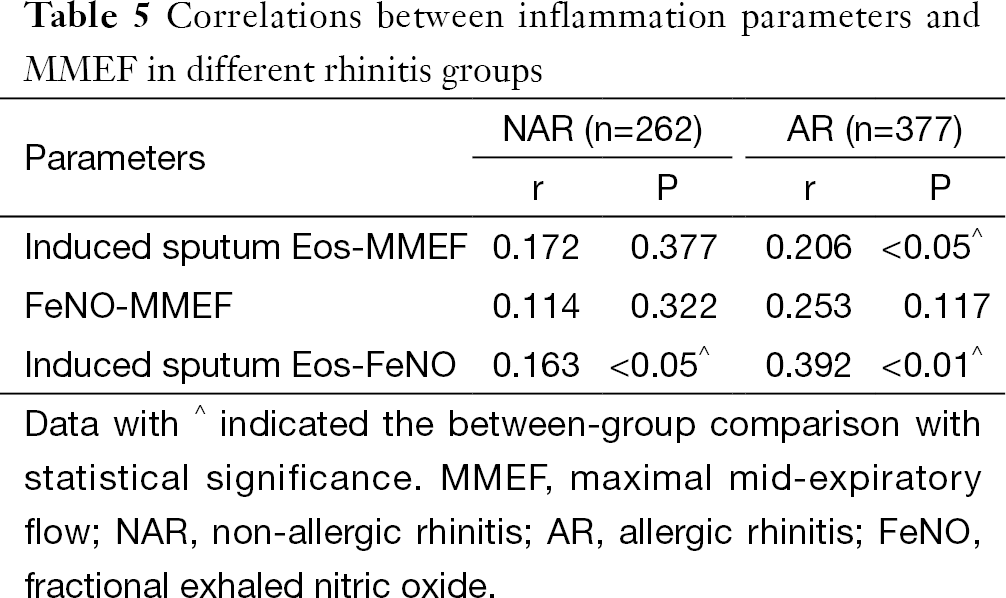 AR is the upper airway inflammatory disease in which IgE and eosinophils are involved (1). Eosinophils have been recognized as the most crucial inflammatory cells leading to the development of asthma (26). Sputum eosinophilia may be present in patients with AR without asthma and has also been associated with the development of AHR (27). In keeping with literature reports, we found that patients with AR without asthma yielded markedly higher levels of serum IgE, induced sputum eosinophils and FeNO compared with healthy subjects, and that a subgroup of these patients had presented with AHR, further confirming the “one airway, one disease” hypothesis (10).

It should be recognized that, from an epidemiological point of view, the AR and NAR are both strong risk factors of asthma (28-30) irrespective of the atopic status (12). Our study has offered valuable clinical data in support of these epidemiologic findings. Apart from the eosinophilic inflammation observed in NAR with eosinophilic syndrome (NARES), the neurogenic inflammation, including trigeminal nerve reflex, autonomous neurologic disorders (31,32) and abnormal neurologic responses (33), could have played considerable roles in the development of NAR. The only disparity between AR and NAR, when analyzed in terms of their definitions, would have been the presence of atopy. However, similar clinical manifestations underlying AR and NAR have also been reported (17,32). Taken together, a certain degree of similarity between NAR and AR could be confirmed. However, the associations of NAR and lower airway inflammation as well as AHR remain largely unknown.

Small airway dysfunction has been the hallmark of early-stage lung function decline (34,35) and is associated with AHR, reduction in FEV1 and multiple allergen sensitization (36). In this study, we have demonstrated that small airway indices, despite being within the normal range, were significantly lower in patients with NAR than in healthy subjects. Meanwhile, the differences in small airway indices between patients with NAR and those with AR were not statistically significant. These findings collectively suggested a similar magnitude of small airway dysfunction underlying both disorders. As a hallmark of asthma, AHR has been a prerequisite for the diagnosis. It has been reported that 14% to 58% of asymptomatic patients with AHR eventually developed into symptomatic asthma (37,38), suggesting that asymptomatic AHR could be de facto the “subclinical asthma” (39). In this study, the prevalence of AHR was markedly higher in groups NAR and AR compared with healthy subjects (6.1% and 12.2% vs. 1.1%, P<0.05). Our findings pointed to existence of “subclinical asthma” and (or) small airway dysfunction in patients with AR or NAR.

FeNO has been a non-invasive tool for monitoring airway inflammation (40) and is recommended for measurement of lower airway inflammation, asthma diagnosis and efficacy evaluation (19). We noted that groups NAR and AR showed higher levels of FeNO and positivity, despite that the positivity was lower in patients with NAR (48.5%) than in those with AR (59.9%), indicating the similarity between AR and NAR. Furthermore, FeNO has been shown to predict the incidence of AHR in patients with AR (41), and the elevated FeNO has been associated with higher serum IgE levels (42). Our data showed that FeNO value was associated with AHR, MMEF and induced sputum eosinophils in AR patients. Although NAR patients with AHR had high levels of FeNO, it did not show statistic significance. These may contribute to the complicated mechanism of NAR or multiple factors affecting FeNO.

Our study has some clinical significance. NAR is a disorder partly mimicking AR that has been associated with a similar magnitude of abnormality in terms of lower airway inflammation, AHR and small airway dysfunction, suggesting that physicians should pay more attention to the future risks of developing into asthma, and that early intervention with medications might be associated with a reduced incidence of asthma.

Our major strength was the cross-sectional study conducted in two major specialist centers with large sample size, which was deemed sufficient to power statistical analyses. However, some potential limitations should be underlined. First, the lack of long-term follow-up visits did not allow us to confirm that NAR patients with lower airway inflammation or AHR are more likely to develop asthma than those without. Second, since allergen nasal challenge tests were not performed, the presence and proportion of patients with local allergic rhinitis (LAR) (32) could not be determined. The existence of lower airway inflammation or AHR in patients with predefined LAR warrants further investigation.