Chronic obstructive pulmonary disease (COPD) is characterized by persistent airflow limitation that is usually progressive. Spirometry is the gold-standard measurement of airflow limitation, and post-bronchodilator forced expiratory volume in 1 second (FEV1) has been used for the Global Obstructive Lung Disease (GOLD) spirometric grading system (1). Pharmacotherapy for patients with COPD is used to reduce symptoms and exacerbations and to improve health status and exercise tolerance. Until 2011, GOLD guidelines had recommended pharmacological treatment based solely on the post-bronchodilator FEV1, and patient symptoms and health status assessments did not guide the choice of pharmacological treatment. However, FEV1 not only correlates poorly with the severity of breathlessness, exercise intolerance, and health status (2,3) but the measure also is not necessarily indicative of treatment efficacy (4,5). The 2011 revised GOLD guidelines changed the pharmacological treatment paradigm based on the combined assessment of symptoms and risk of exacerbations with the patient’s spirometric severity classification (1,6). The Modified British Medical Research Council (mMRC) dyspnea scale and the COPD Assessment Test (CAT) are recommended measures for assessing symptoms. An mMRC ≥2 and a CAT ≥10 are used as a cutoff for a high-level symptoms. Regular treatment with long-acting bronchodilators is recommended for patients with high-level symptoms, and inhaled corticosteroids (ICS) are recommended for patients with severe or very severe COPD with frequent exacerbations. However, the evidence for pharmacotherapy for COPD is mostly based on the severity of airflow limitation (FEV1% of predicted), and no clinical trials have reported outcomes of pharmacotherapy based on the severity of symptoms.

A total of 102 stable COPD patients selected from the Korean Obstructive Lung Disease (KOLD) cohort were included in this study. All had stable COPD and were prospectively recruited from the pulmonary clinics of six tertiary hospitals in South Korea between June 2012 and August 2014. The study design and outcomes of the KOLD cohort have been described elsewhere (7). COPD was diagnosed based on the presence of airflow limitation that was not fully reversible [post-bronchodilator FEV1/forced vital capacity (FVC) <70%] and smoking history (>10 pack-years). Key exclusion criteria were COPD exacerbations or lower respiratory infections within 8 weeks before the screening visit, diagnosis of asthma and/or other relevant lung disease except COPD, and requiring supplemental use of oxygen. This study was approved by the Asan Medical Center Institutional Review Boards (IRBs) (the main study site), and each patient provided written informed consent.

Baseline clinical data were obtained after discontinuation of the ICS/LABA combinations for 1 week, discontinuation of LAMA for 2 days, or discontinuation of an inhaled short-acting beta2-agonist for 12 h. The baseline clinical data included demographic information, smoking history, medical history, medications, pulmonary function tests, and a six-minute walk test. The mMRC dyspnea scale and the validated Korean version of the CAT and the St. George’s Respiratory Questionnaire (SGRQ) questionnaire were administered to assess the degree of dyspnea and health-related quality of life (HRQoL) (8,9). After the enrollment visit, all patients were recommended for treatment with an inhaled LAMA and/or ICS/LABA combinations. During the treatment period, only salbutamol was allowed as needed. After a 3-month treatment, the mMRC dyspnea scale, the CAT questionnaire, and spirometry were performed 2 to 6 h after inhalation of the drugs in the morning. Adherence to the treatment medication was monitored and recorded by research coordinators. All included patients were asked to bring back their inhalation device in order to measure how much they had used. All patients included in the study indicated that they had taken >80% of the prescribed respiratory medication doses. All pulmonary function tests were carried out as recommended by the American Thoracic Society/European Respiratory Society (10-12).

Data are summarized as the means and standard errors for subgroup information for continuous variables and as relative frequencies for categorical variables. The groups were compared using a Pearson’s χ2 test, Fisher’s exact test, Student’s t-test, or Mann-Whitney U test depending on the type of variable and its distribution. The relationship between two continuous variables was measured by a Pearson or Spearman correlation analysis. Pharmacological treatment responses were assessed by changes in the mMRC dyspnea scale, the CAT scores, FEV1, and FVC before and after the 3-month treatment. The numbers of patients were calculated that changed more than the minimal clinically important difference (MCID) for the mMRC dyspnea scale and the CAT score after a 3-month treatment. The MCIDs for the mMRC dyspnea scale and the CAT score were 1 and 2 points, respectively (13,14). To determine the predictors of symptom improvement after the 3-month treatment, a multiple analysis was performed using multiple logistic regression models for the mMRC dyspnea scale and the CAT score changes greater than their MCIDs adjusting for age, body mass index, smoking pack-years, current smoking, FEV1 (% predicted), diffusing capacity for carbon monoxide (% predicted), and inspiratory capacity (IC)/total lung capacity (TLC). Multiple linear regression analysis was also performed to identify the clinical factors associated with spirometric pulmonary function improvement after a 3-month treatment. All statistical analyses were carried out using the IBM SPSS statistical package (version 21.0; IBM Corp., Armonk, NY, USA). The significance threshold was defined as a P<0.05.

Baseline characteristics of the enrolled patients 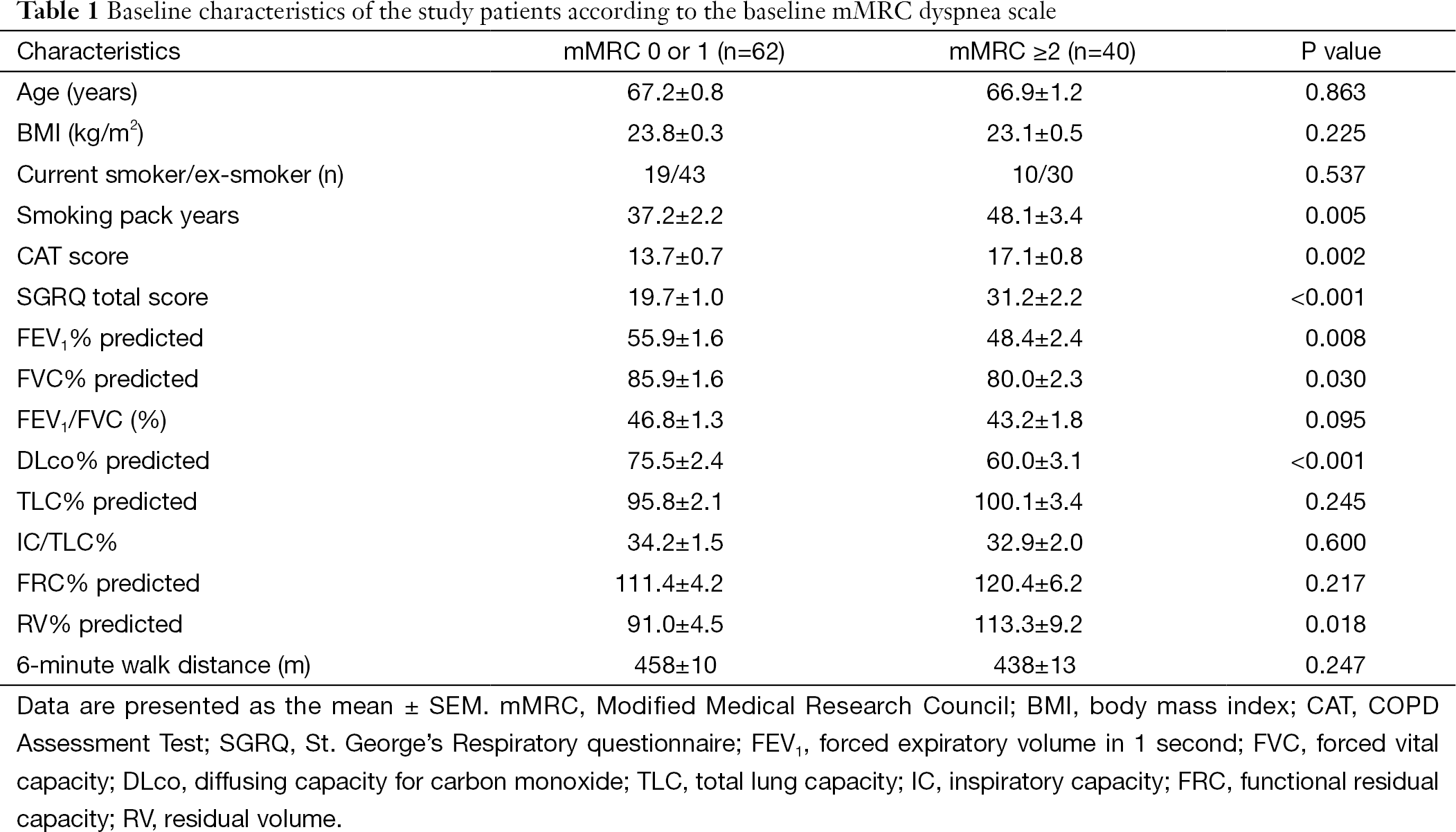 Symptom and pulmonary function changes after a 3-month treatment 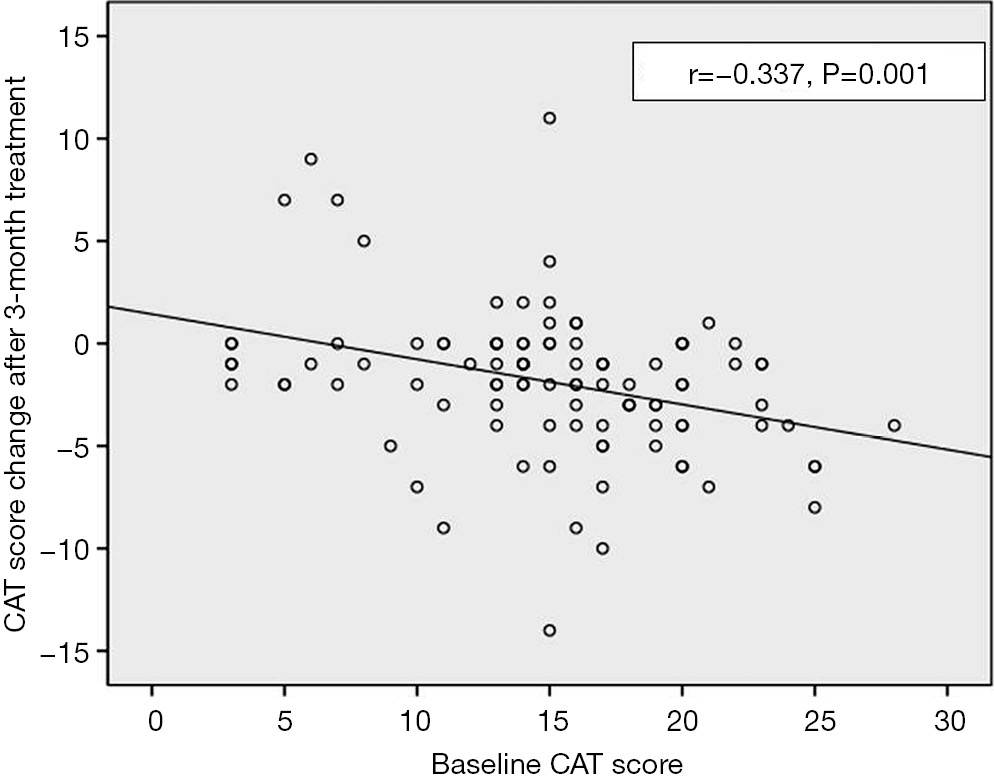 Since no existing medications have been shown to modify the long-term decline in lung function in COPD, the current major goals for pharmacological treatment of this disease are to reduce current symptoms and future exacerbation risks and to improve the patient’s health status (1). Thus, identifying the clinical parameters that can be used to predict symptom relief and health status improvement after pharmacological treatment is clinically important. COPD is a multi-component and heterogeneous disease with variable clinical presentation and treatment responses (15,16). FEV1 has been recognized as the gold standard index of airflow limitation that measures both symptomatic relief and disease progression (17). However, FEV1 demonstrates only a weak correlation with patient-centered outcomes, such as dyspnea, exercise capacity, and HRQoL (2,3). Furthermore, FEV1 has limited usefulness in the evaluation of therapeutic response in individual patients (16,18). Thus, a comprehensive assessment of pulmonary function, symptoms, and HRQoL is required to adequately evaluate the expected therapeutic response in patients with COPD.

In our current analyses, the mMRC dyspnea scale and the CAT score were used for the quantitative assessment of dyspnea and HRQoL in patients with COPD. Dyspnea is the most bothersome symptom and a major cause of disability in patients with COPD (19). The mMRC dyspnea scale is a simple and reliable measurement of dyspnea associated with daily activity. The scale relates well to other measurements of health status and predicts the risk of future mortality (20). The disadvantage of the mMRC dyspnea scale is its insensitivity to change in response to treatment, and the scale does not take into account the variation in effort exerted by patients in their activities (21). However, a difference of one grade is considered indicative of a clinically significant change in dyspnea (13). The CAT score was developed to measure the impact of COPD on HRQoL and to aid patient-physician communication (22). The CAT score also correlates closely with health status measured using the SGRQ and is reliable and responsive to treatment (23,24). A CAT score ≥10 has been shown to have a significant impact on the daily lives of patients with COPD and to predict future exacerbations (25,26). An MCID for the CAT has not been officially established, but the threshold has been estimated to be two units (14).

There were several limitations in this study. First, this study was an open-label observational design that did not include a placebo arm. The likelihood of bias in an open-label study should be considered. Second, approximately 90% of the included patients had moderate to severe airflow limitation (GOLD spirometric grade II or III). Therefore, the potential for selection bias cannot be excluded, and our study results may need further validation in patients with very severe COPD. Third, approximately 80% of the enrolled patients were treated with a triple combination of inhaled LAMA and ICS/LABA in order to maximize the pharmacological treatment effect. In real-world clinical practice, this triple combination therapy is usually used in patients with very severe COPD patients with frequent exacerbations. Further studies may be required to evaluate the effects of mono-therapy with LAMA or LABA based on symptom severity. Finally, all of our enrolled patients were men. Gender may have a substantial influence on the treatment response in COPD patients, so we cannot generalize our present results to women (29).

In conclusion, the baseline severity of COPD symptoms is associated with patient response to pharmacotherapy. COPD patients with a higher baseline mMRC dyspnea scale and CAT score experience a greater symptom reduction from pharmacotherapy.

Funding: This work was supported by grants from the Korea Healthcare Technology R&D Project, Ministry for Health and Welfare Affairs, Republic of Korea (HI10C2020 and A102065).