Of the commonly used regimens, a combination of 5-fluorouracil with cisplatin or paclitaxel with cisplatin is widely used (4). However, the administration of cisplatin is frequently accompanied by several severe toxicities, including gastrointestinal, nephro- and neurotoxicity. New protocols that can achieve similar outcomes yet minimize the toxicities are required urgently.

Lobaplatin, (D-19466; 1,2-diamminomethyl-cyclobutane-platinum(II)-lactate), characterized by interesting antitumor activity, apparently no nephro- or neurotoxicity and no cross-resistance to cisplatin and carboplatin, demonstrated strong activity against esophageal cancer cell lines in preclinical studies (5). Thus, the efficacy and safety of the combined lobaplatin with paclitaxel (LP) regimen in esophageal squamous cell carcinoma had been reported rarely (6,7), and there was no similar research of the LP when used as first line treatment had been reported.

To assess the efficacy and toxicities of LP for first line treatment of esophageal squamous cell carcinoma we collected and reviewed retrospectively the clinical data of 45 patients.

This retrospective analysis was approved by Fujian Medical University Union Hospital Institutional Review Board. All patients wrote informed consent prior to treatment and all information had been anonymized and de-identified prior to its analysis.

The eligibility criteria for this retrospective study were as follows: (I) histologically-proven squamous cell carcinoma of the esophagus, age from 18 to 75 years, Eastern Cooperative Oncology Group (ECOG) performance status scoring ≤2; (II) adequate organ function (bone marrow, hepatic, and renal) for chemotherapy (10); (III) local or system advanced tumor and initially chemotherapy with LP at least two cycles; and (IV) patients had an integrity assessment by barium esophagography and CT scan after every two cycles of chemotherapy.

The exclusion criteria included the following: (I) history of other tumors; (II) previous treatment for esophagobronchial or esophagomediastinal fistulas; and (III) other concomitant medical conditions requiring treatment.

The dose levels and schedule date of paclitaxel (Jiangsu Yew Pharmaceutical Co. Ltd, Wuxi, China) and lobaplatin (Hainan Changan International Pharmaceutical Co. Ltd, Haikou, China) were 135 mg/m2 dL and 30 mg/m2 dL, respectively, with 3 weeks repeated (11,12). The time interval and dose intensity of chemotherapy were adjusted based on the toxicities of the previous chemotherapy course and the acute toxicities of radiotherapy. The doses were reduced by 25% in the subsequent course if ≥ grade III hematotoxicity, hepatotoxicity, nephrotoxicity, or esophagitis was observed. The treatment was suspended if the recovery from toxicity were delayed >3 weeks.

Patients who received radiotherapy underwent 3-dimensional conformal or intensity modulated radiation therapy. The radiotherapy would normally be initiated 3 weeks after completion of the first two cycles of chemotherapy. The dose and target of radiotherapy were defined as followings (13): the gross tumor volume (GTV) contains the primary tumor and metastasis lymph nodes. The clinical target volume (CTV) was defined as the primary tumor with a margin of 3.0 cm in the cranial-caudal directions for the primary tumor (and a minimum of 1.0 cm for the lymph nodes), a 0.5 cm margin (modified for anatomic boundaries) circumferentially, and the elective lymph nodal regions. The dose to the CTV and GTV was 4,500-5,040 cGy and 5,040-6,600 cGy (180 cGy/fraction), respectively. The dose to CTV and GTV was 4,000 cGy in patients intending to esophagectomy.

Patients who proceeded to operation underwent thoraco-laparoscopic esophagectomy and extensive two- to three-field lymphadenectomy (17) at 3-4 weeks after completion of the first two cycles of chemotherapy.

To achieve chemotherapy, the prophylactic anti-emetic with a 5-hydroxytryptamine (5-HT3) antagonist was administrated conventional during chemotherapy and the recombinant human granulocyte colony-stimulating factor was commonly administered when patients experienced grade I or more neutropenia. To complete radiotherapy, a low dose of dexamethasone was applied routinely when patients encountered ≥ grade I radiation esophagitis.

With the exception of instances where the dysphagia worsened during chemotherapy, the response to chemotherapy was evaluated every two cycles by CT scanning and barium esophagography 3-4 weeks after the completion of chemotherapy and reassessed after at least 4 weeks.

Dysphagia was evaluated as follows: a score of 0 corresponded to tolerance of normal diet, 1 to some solid food, 2 to semi-solid food only, 3 to liquids only, and 4 to complete inability to swallow (21).

Patients were evaluated every 3 months for the first 2 years after treatment, and future follow-up evaluations are scheduled for every 6 months for the next 3 years, and then annually. Surveillance included interim history and physical examination, assessment of swallowing function, performance status and weight measurement, and laboratory testing. Esophagogastroduodenoscopy and CT of the chest and abdomen were performed every 6 months for 2 years and will be performed annually thereafter.

All patients’ outcomes were evaluated in December 2014.The primary endpoints were overall response and toxicities of chemotherapy. The secondary endpoint was dysphagia relief and toxicities of CRT. The data were analyzed with SPSS software, version 17.0 (SPSS, Inc., Chicago, IL, USA). The difference of the dysphagia relief was tested by Wilcoxon’s signed rank test. A two-tailed P value of less than 0.05 was considered statistically significant.

From January 1, 2013 to July 31, 2014, a total of 45 patients fulfilled the eligibility criteria. The clinical characteristics of these patients are summarized in Table 1. 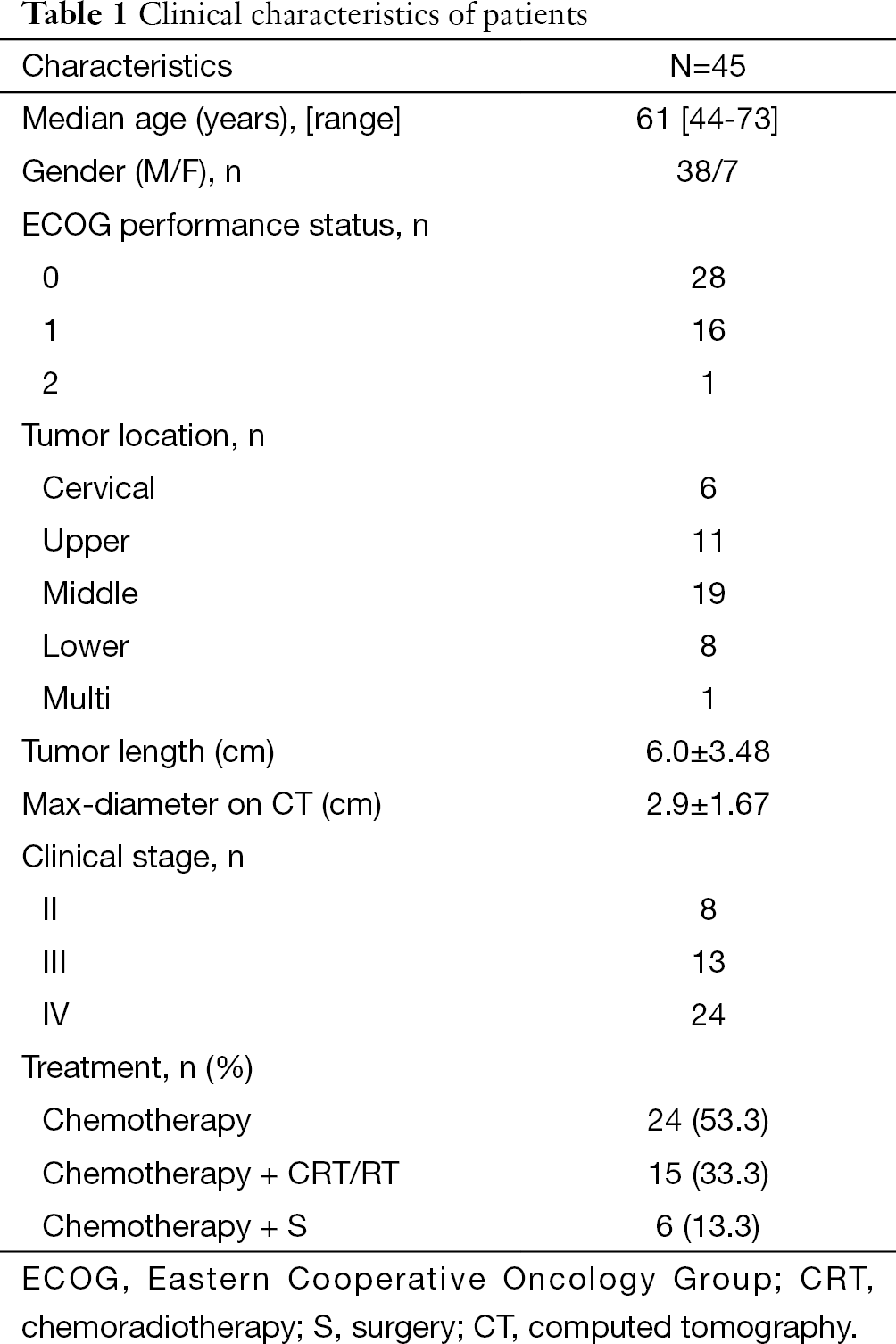 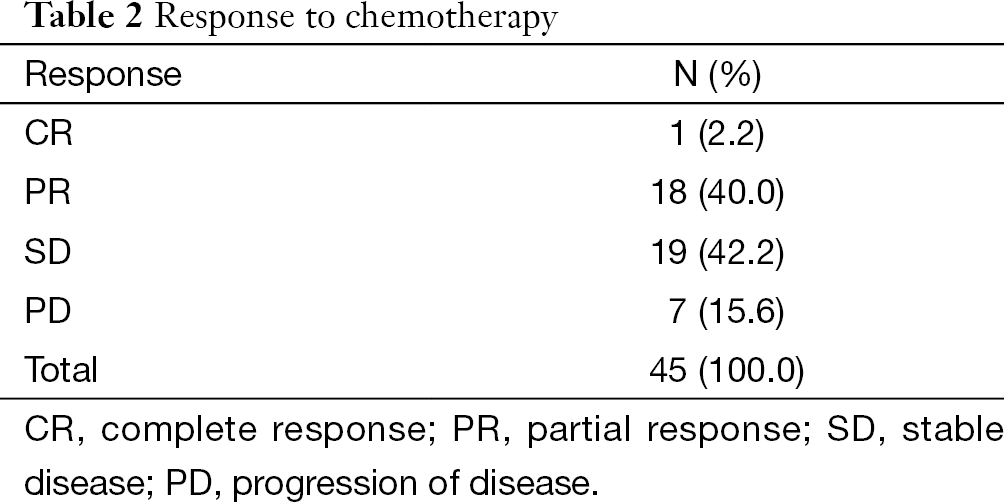 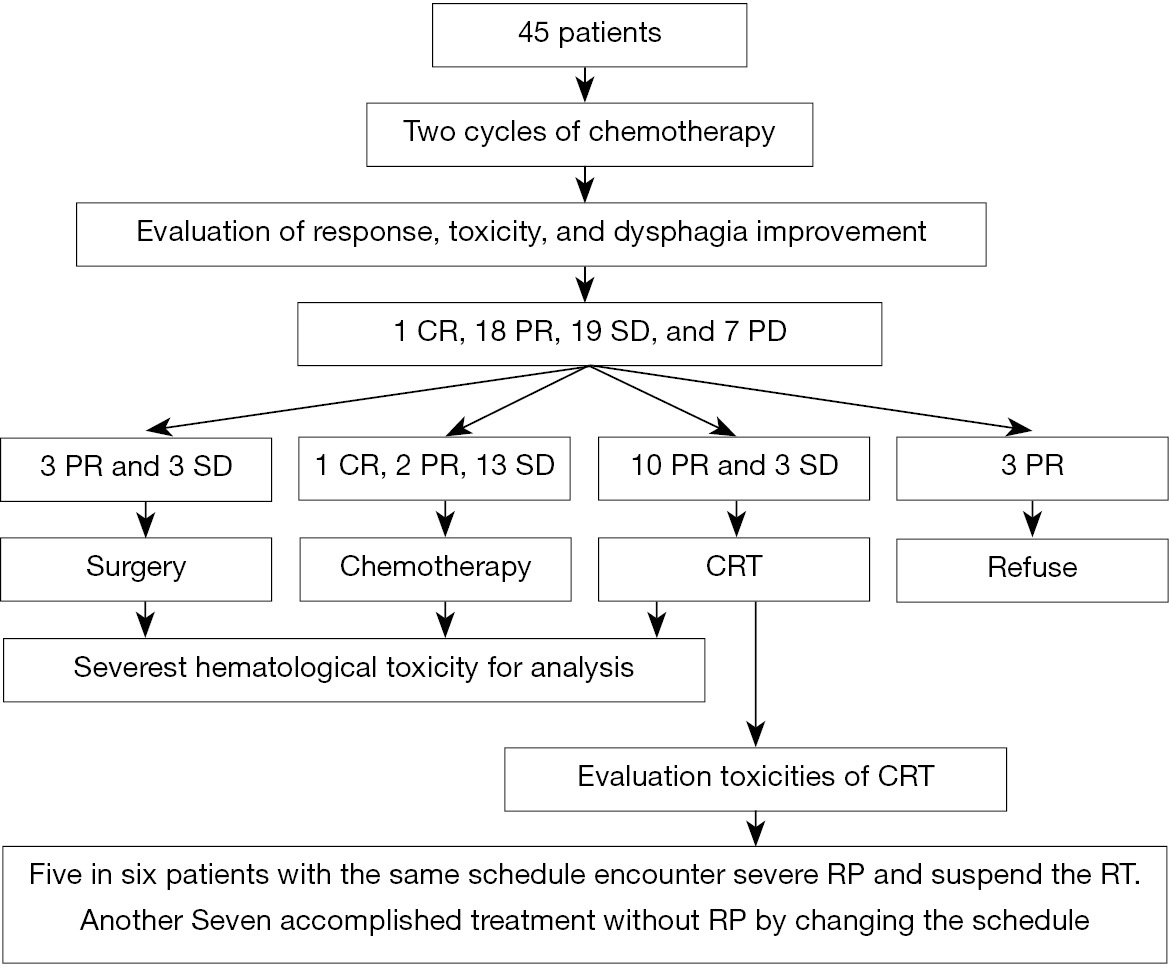 The most common toxicity of chemotherapy was hematological. Gastrointestinal toxicities and hepatotoxicity were very minimal, no nephrotoxicity was observed, and no treatment-related deaths occurred during the study (Table 3).

A total of 13 patients received CRT were identified for toxicity assessment of radiation. All 13 patients experienced grade I-II radiation esophagitis and no grade III-IV occurred. A grade III/IV radiation pneumonitis were observed in five of the preliminary six patients all treated with the same chemotherapy dose and time interval of concurrent chemotherapy as NAC, and therefore the RT was suspended for these patients. No untolerated lung toxicity recurred in the subsequent CRT patients by extending the time interval of concurrent chemotherapy from 3 to 4 weeks.

All patients had different degree of dysphagia prior to treatment. This resolved or improved in 32 patients (71%), was unchanged in 13 patients (29%) after NAC, and did not worsen in any patient. The improvement of dysphagia after NAC was statistically significant compared to the severity before treatment (Table 4).

Despite the fact that there were no available data from phase III clinical trials, the combined regimen of LP was recommended as one of several second line chemotherapy regimens for advanced esophageal cancer in China (11), and was considered to be a safe and effective protocol for the first line treatment with an overall response (PR and CR) of about 80% (6,7). However, in the present study, the overall response of the LP regimen reached only 42.2% (19/45), similar to the regimen of paclitaxel-cisplatin at 40-45% (22,23) and superior to that of the traditional regimen of 5-fluorouracil with cisplatin at 30-35% (24,25).

With administration of a 5-HT3 antagonist conventionally during chemotherapy, most of (82.2%) patients experienced mild nausea/vomiting (grade I/II) without grade III-IV instances occurring in the current study, similar to Li’s report of 80.6% (28). In addition, whether treated as first or second line chemotherapy regimen, nothing much of hepatotoxicity and nephrotoxicity were reported previously (6,7,28), as demonstrated in this study, only four patients (8.9%) encountered grade I hepatotoxicity and no nephrotoxicity was observed. All these mild non-hematological toxicities were not required to reduce the dose of treatment and were able to continue on therapy.

Dysphagia is the most common and serious symptom of esophageal cancer. Many prior studies of chemotherapy in esophageal cancer had indicated that chemotherapy by itself might lead to significant palliation of dysphagia (22,23,29). In the current study, regardless of the objective response to neoadjuvant chemotherapy, initial therapy with LP was very effective in dysphagia relief and with no patient worsened. The improvement in dysphagia should be noted and also highlights the importance as a possible palliative therapy. Furthermore, the discrepancy between the dysphagia relief and the objective response suggested that using the improvement of swallowing function as a response evaluation standard for chemotherapy may be not appropriate.

In conclusion, the LP showed a significant antitumor effect to squamous esophageal cancer with main toxicity of leukopenia in addition to thrombocytopenia and mild gastrointestinal, hepatic- or nephro-toxicity toxicities. When combined with radiotherapy, LP would not exacerbate the radiation-induced esophagitis; however, serious lung toxicity should be paid special attention. Limitation of the surveillance time and the retrospective nature, the effect that based on these data formal prospective trials appear warranted and are needed prior to routine first line use of this regimen.