Postoperative hemorrhage is a common complication following open heart surgery. It has been reported that the incidence of chest re-exploration ranges from 2% to 6.2%. However, massive bleeding in a short period after surgery is not frequent indeed. Here is the case of serious bleeding due to cardiac puncture caused by the fractured ends of the steel wire.

A 60-year-old man with hypertrophic obstructive cardiomyopathy and severe mitral regurgitation underwent ventricular septal myectomy and mitral valve repair in July 2014. And we closed the sternum by using No. 6 steel wires in a figure-of-eight suturing manner. On the first day after operation, the patient status was stable and the drainage volume in the first 24 hours was 260 mL. Next day, the patient was transferred back from intensive care unit (ICU) to telemetry ward. In the morning of third postoperative day, the patient woke up with serious cough. Suddenly, the drainage volume increase to about 1,000 mL within half an hour. Due to massive bleeding from chest, the patient developed hypovolemic shock and being rushed right to the operation room for re-exploration. Exploring the chest, we found that the upper two steel wires were intact, but the lowest wire was broken into two segments (Figure 1). It was the fractured steel wire that lacerate the free wall of the right ventricle and resulted in about 3 mm damage. We stopped the bleeding successfully by using interrupted 4-0 prolene pledgeted horizontal mattress stitches. After 2 days later, the patient was back to ward and discharged home on the 8th postoperative day with good condition. We carefully examined the end of fractured steel wire and found its cross-section was neat and smooth, which was different from the man-made cut (Figure 2). 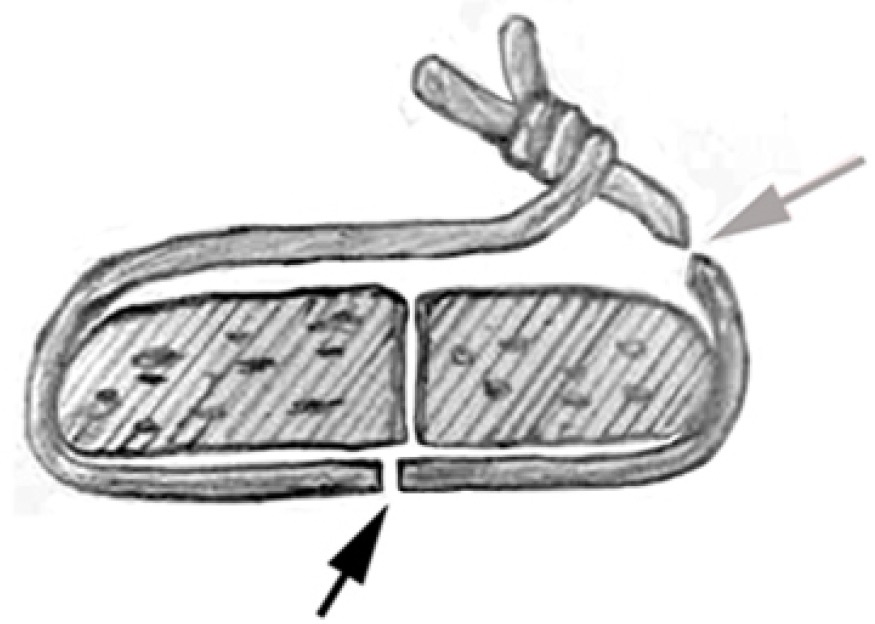 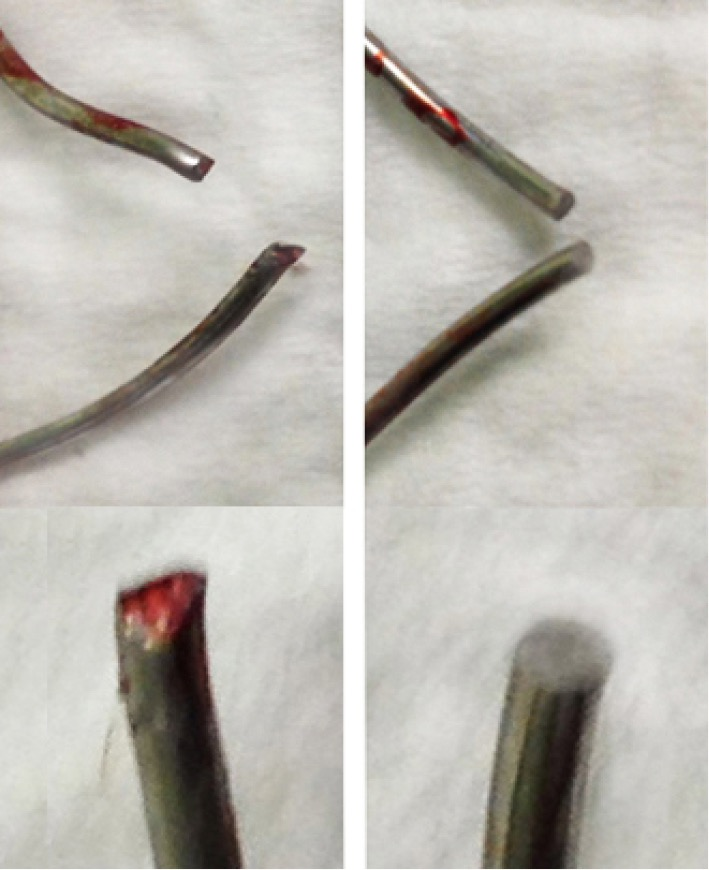 Actually, there are many reasons for excessive bleeding after cardiac surgery, such as blood coagulation disorders after extracorporeal circulation, preoperative multiple organ dysfunctions, intraoperative hemostasis, and protamine supplement deficiency (1). However, we have never witnesses re-exploration caused by fatal bleeding due to fractured steel wire.

Mainly, two reasons respond for the sternal wire fracture: the overloading due to the patient’s activity and the wire mechanical fatigue, such as growth of sternum, activities, and the sharp increase of wires’ yield strength (2). Usually, wire fracture occurs a week or more after surgery. However, in this case, the wire fractured on the second postoperative day. What’s more, the fractured point was under the sternum rather than the usual screwed location (Figure 1). Stable sternal fixation is the sine qua non for healing of median sternotomy. So new techniques and materials for median sternotomy closure are needed which are less prone to cause mechanical fatigue.

A large cohort of consecutive cardiac operations found that sternal closure with figure-of-eight single wires was better than simple interrupted wires (3). And also in our center, usually we close sternum with steel wires in the shape of figure-of-eight. Nevertheless, the optimal technique for sterna closure remains controversial. It has been reported that as for sternal fixation, double wire loops is better than single wire (4). Because of the better biomechanical stability, it has been accepted by many centers. And also the complication presented may not happen if double wire closure was used. There are many other median sternotomy closure techniques too. A retrospective study indicates that the sternal plating is an effective option to treatment of sternal wound dehiscence associated with sternal instability (5).

The wire rupture in present case was the result of not being able to afford the instant yield strength after severe coughing. New techniques and materials for median sternotomy closure, external chest strap, combined with appropriate postoperative respiratory therapy can minimize the occurrence of such complications.