Approximately 460,000 people are diagnosed with esophageal cancer worldwide annually, with ~380,000 people die of the disease. This makes it the eighth most common cancer and the sixth most common cause of cancer mortality (1). Esophageal squamous cell carcinoma (ESCC) is the major histologic subtype and is characterized by a high mortality rate and geographic differences in incidence (1-3). To date, there has been no comparative study for ESCC between eastern and western countries.

ESCC occurs more commonly in persons of lower socioeconomic status so that the availability of medical treatment is problematic (4). If there are differences in incidence and outcome, it could be as a result of differences in ethnic groups, living conditions, socioeconomic strata, treatment options and choices, and differences in the health care systems (5-9). A recent large genome-wide association study (GWAS) of ESCC has identified two susceptibility genes, PLCE1 and C20orf54, which were highly associated with ESCC in the Chinese population. PLCE1 regulates cell growth, differentiation, apoptosis and angiogenesis. C20orf54 is responsible for transporting riboflavin, and deficiency of riboflavin has been documented as a risk factor for ESCC. PLCE1 and C20orf54 have important biological implications for ESCC and might account for the pathogenesis of ESCC (10). However, to date, no genetic susceptibility to ESCC in Caucasians has been identified.

The goals of our study were as follows: First, to use registry data to provide a detailed picture of ESCC cases, describing gender, age, primary site, stage, grade, and prognosis. Second is to compare ESCC survival for Chinese resident patients and Caucasians living in the US.

Data for this analysis came from two sources. Data for Caucasians were from the Surveillance, Epidemiology and End Results (SEER) limited-use database. SEER collects cancer incidence and survival data from population-based cancer registries covering approximately 26% of the U.S. population. The routine data collection includes detailed information on demographics, diagnosis, tumor characteristics and treatment information (11). Data for Chinese were from Shanghai Cancer Registry (SCR) compiled by Shanghai Municipal Center for Disease Control (SMCDC) (12). A total of 175 hospitals, qualified for cancer treatment, in the greater Shanghai area are responsible for reporting all newly diagnosed cancer cases, using a standardized report card. A patient consent form was obtained, following an approved, institutional-reviewed protocol (13). Death certificates for all cancer patients are obtained monthly from the Vital Statistics Section of the SMCDC.

Differences in the distribution of gender, age group, tumor stage and primary site between two groups were evaluated using the Chi-square test (14).

One-year, 3-year and 5-year overall survival rate and median survival time were calculated using the life-table method. ESCC-specific survival curves were calculated according to the Kaplan-Meier method and compared by the log-rank test (12).

All analyses were performed with the SPSS version 17.0 (SPSS Inc., Chicago, IL, USA). All P values were two-tailed and P<0.05 was considered statistically significant.

Tumor characteristics of ESCC patients from the two populations

The distribution of cases by gender, age group, primary site and stage, is shown for each population in Table 1. The Caucasian group had a significantly higher proportion of female patients than Chinese (38.24% vs. 18.68%, P<0.01). Chinese patients were younger, with only 31.18% of patient above 70 years old while Caucasians with 50.55% above 70 years (P<0.01). A total of 49.48% patients were diagnosed in the advanced stages (stages III and IV) in the Chinese resident population, while the majority of Caucasians (55.17%) presented with advanced stage disease (P<0.01). 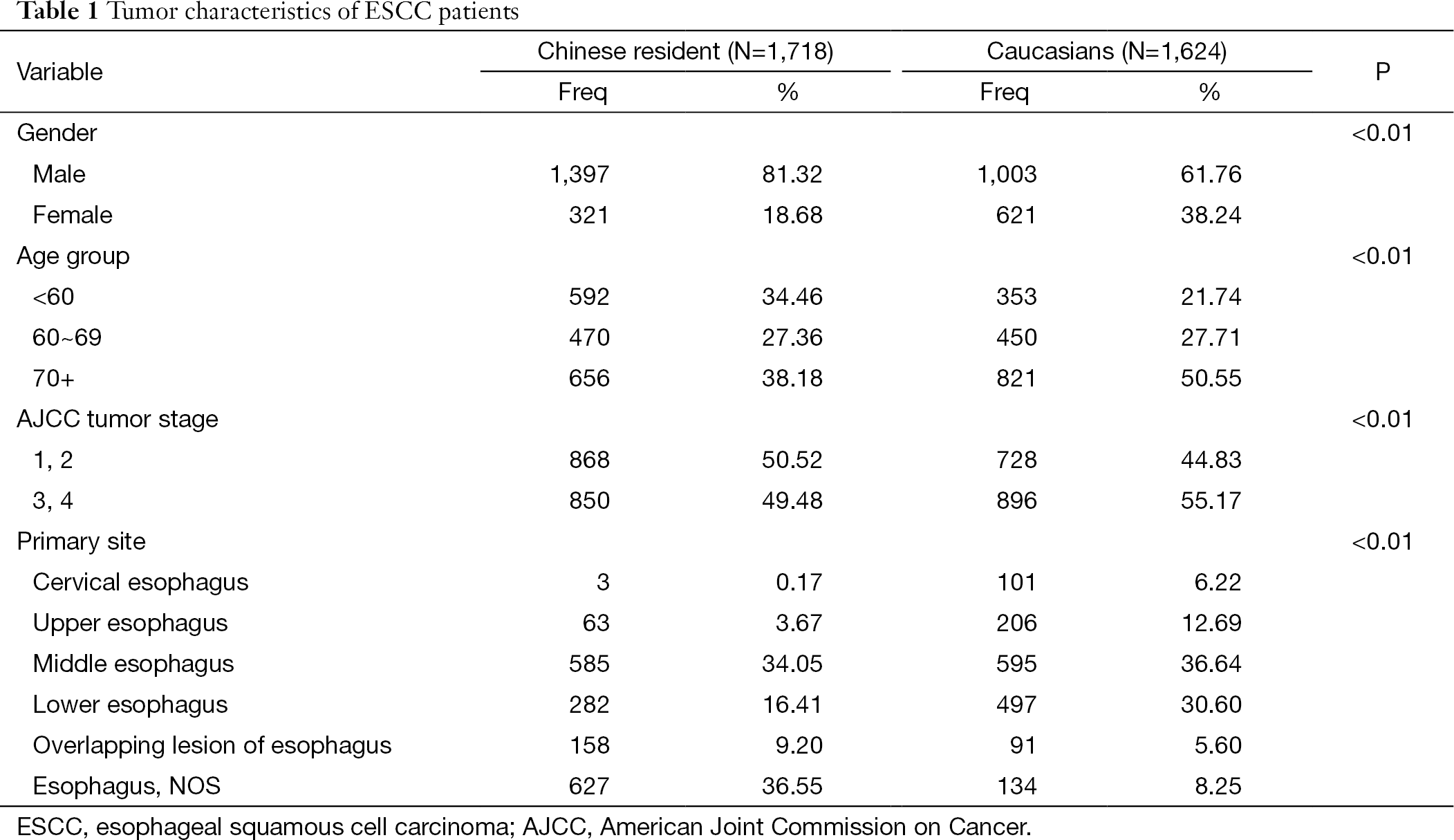 Among age, sex, stage and, tumor site, age and stage were found to be independent prognostic factors in each population after adjustment using the Cox proportional hazards model (P<0.01). 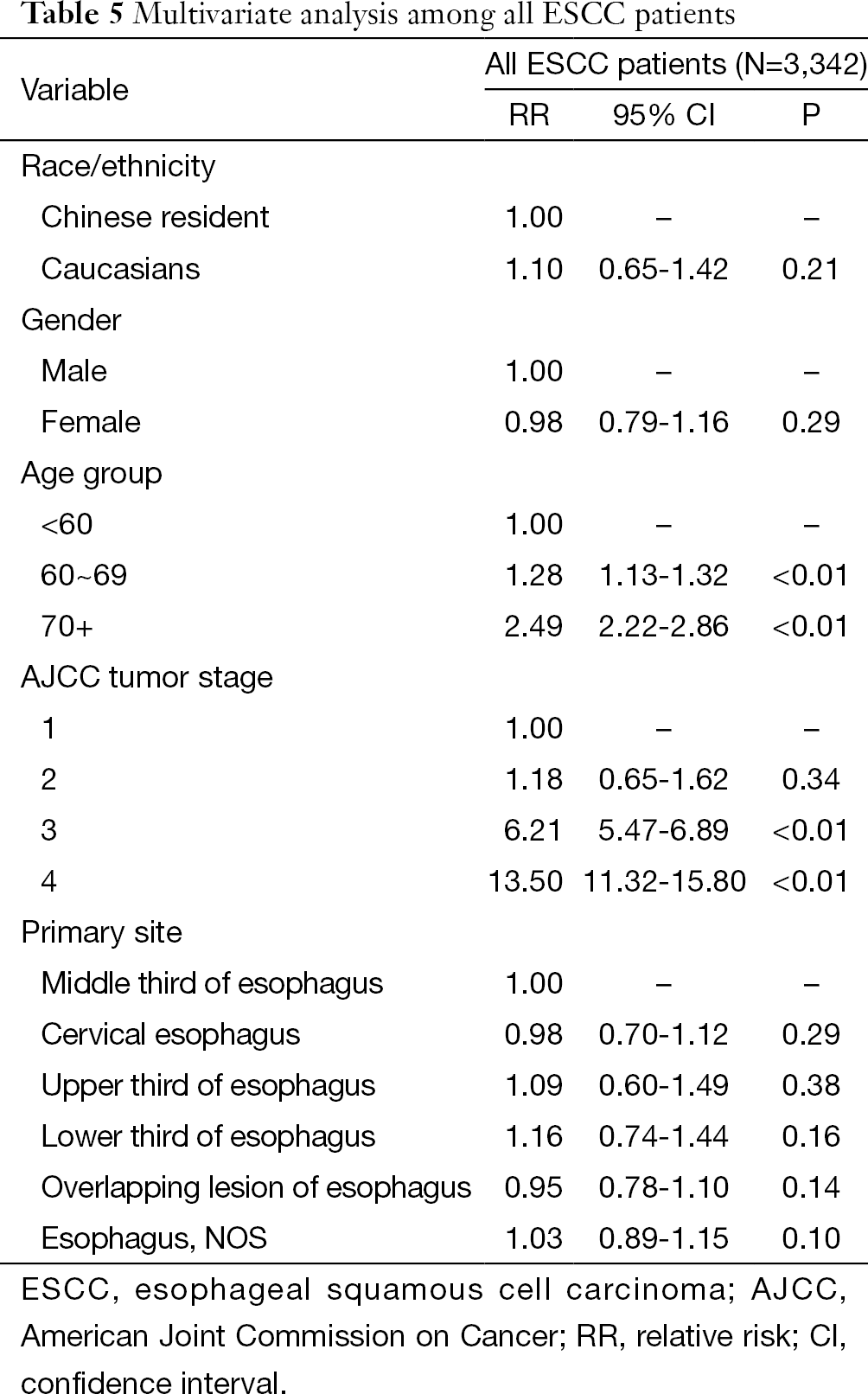 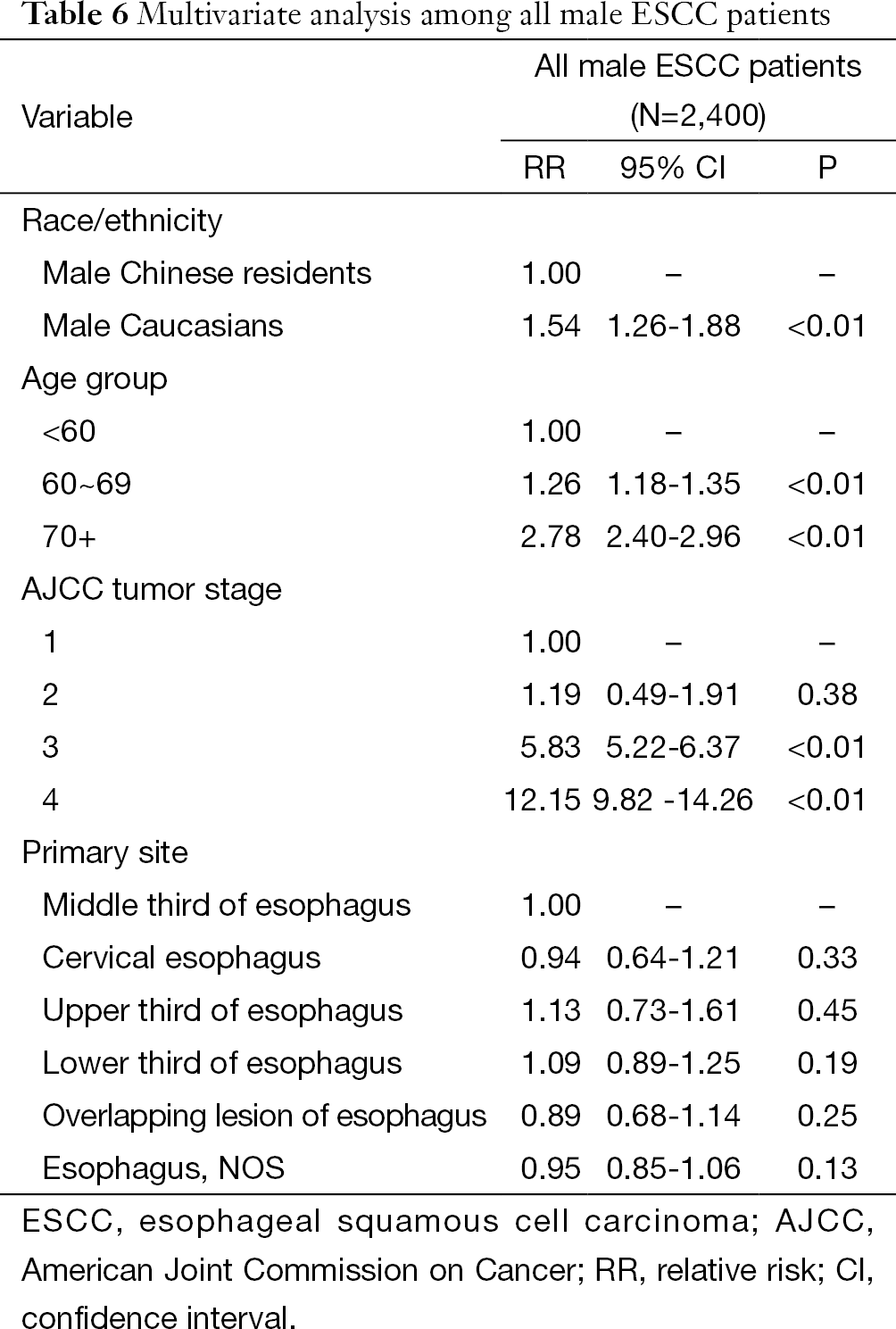 ESCC remains the predominant histological subtype of esophageal cancer world-widely (2,3). However, previous studies had provided scant and discordant data about the differences in tumor characteristics and prognoses between different ethnical groups (15). Several interesting results are disclosed in the current study: Chinese patients were diagnosed with ESCC at an earlier age and stage than Caucasians (Tables 2,6). Another interesting finding was that Chinese patients had similar overall survival rate with Caucasian by both univariate and multivariate analysis. The median survival time of male Chinese patients was significantly longer than that of Caucasians (Tables 3,6).

Compared to Caucasians, Chinese patients develop the disease at an earlier age and earlier stage for the entire population (Table 2) and for males-only (Table 6). This may be attributed to different causes of the disease between the populations. A familial aggregation tendency in high-risk areas suggests that genes may play a role in ESCC pathogenesis (16,17). As mentioned in Introduction, several genes have been considered to contribute to ESCC in Chinese, such as PLCE1 and C20orf54 (10), and ADH1B and ALDH2 in Japanese (18). This genetic susceptibility among Asian populations may partly explain the early onset in Chinese patients. There has been research concerning environmental factors as well. Some studies have demonstrated that smoking, alcohol consumption, and high body mass index (BMI) are more important risk factors of ESCC in western countries than in China (3,19,20). Thus, for the American patients, it would take longer to develop ESCC, reflecting the cumulative effects of these factors. On the other hand, for Chinese, nutritional imbalance, intake of pickled vegetables, nitrosamine-rich and mycotoxin-contaminated foods seem more important (21,22). Such factors may take less time to develop neoplasia.

We also noted that Chinese male patients lived longer than Caucasians (Tables 3,6). Younger patients usually have fewer comorbid diseases, less complications from treatment, may have more of an economic ability to afford treatment, and more willingness to invest in health. Thus, younger patients could have better outcomes if their diseases are not too aggressive (23,24). Besides, a considerable percentage of the western patients get ESCC after radiotherapy on mediastinum for their lymphoma. These tumors resulting from radiation grow with more invasive and malignant biological characteristics. This may be another explanation of the relatively poorer prognoses of Caucasians.

We also noticed the difference in distribution between males and females. In comparison with Chinese, Caucasians had a significantly higher proportion of females (Table 1). This difference may partly be attributed to higher smoking and drinking prevalence among Caucasian women.

The strength of this study is that the analysis of these characteristics and comparing Chinese resident patients and Caucasians living in the US, has not previously been done. However, our study was limited to available variables and comparable databases, so that not all possible factors affecting survival were considered. In addition, socio-economic status, family history of ESCC, and lifestyle factors, such as alcohol consumption and smoking, were also not studied. Further prospective studies are also needed to define the genetic susceptibility for ESCC, especially in western countries.