A 49-year-old female presented to the emergency department after stab injuries. She had multiple lacerations on the face, arm, and bilateral anterior chest wall. Extended focused assessment with sonography for trauma revealed a hemopneumothorax on the right thoracic cavity. First, we performed closed thoracostomy, central catheterization of the right subclavian vein, and workup for other injuries. Initial chest computed tomography (CT) revealed a left pneumothorax. Closed thoracostomy was also performed and the patient was transferred to the intensive care unit for close observation. Primary repairs including neurorrhaphy and tenorrhaphy were performed. Three days later, she was transferred to the general ward and started on a diet.

Triglyceride level was 46 mg/dL and cholesterol count was 28 mg/dL. Other laboratory findings were equivocal. The presence of chylomicrons on lipoprotein electrophoresis of pleural fluid confirms the diagnosis of pseudochylothorax, but this test is not available at our hospital. Instead, we attempted a provocative test with food and oil, which resulted in collection of 1,370 mL of milky fluid and oil from the drain after 3 hours (Figure 1). 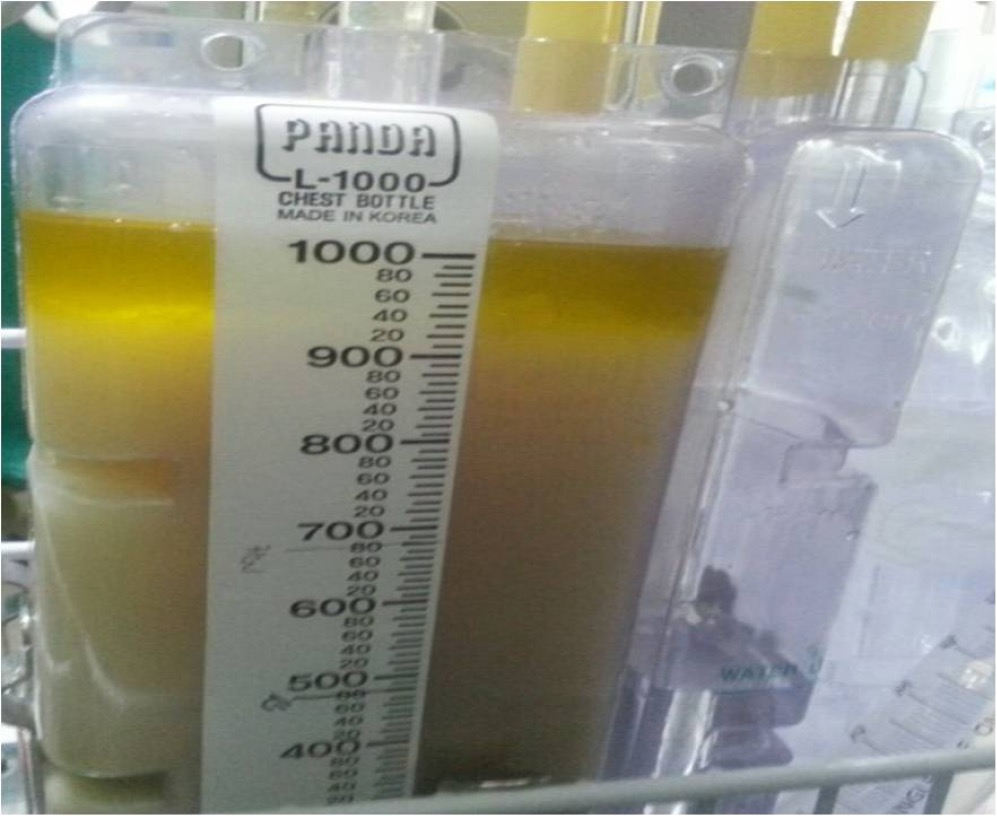 Figure 1 Photograph showing milky fluid in the bottom of the chest bottle and oil collection on the top.

The diagnosis of chylothorax was confirmed, and conservative management involving parenteral nutrition, restriction of oral intake, and octreotide injection was continued. Despite treatment for 2 weeks, however, 300-400 mL of fluid was drained daily. We decided to perform a thoracic duct ligation. However, the patient refused and the patient’s psychiatrist recommended that the procedure not be performed based on a diagnosis of post-traumatic stress syndrome (PTSD).

As an alternative, we decided to perform lymphangiography, which is a therapeutic option as well as a tool to diagnose the point of leakage. Both femoral lymph nodes were punctured with a 25-gauge spinal needle under ultrasound guidance and ethiodized oil (Lipiodol: Guerbet, Paris, France) was injected manually. The injection of lipiodol was stopped when the lymphatics at the third lumbar level were visualized. The injected volume was 6 mL per lymph node. Serial chest abdominal radiographs were obtained every 6 hours to evaluate the leakage site. However, there was no additional upward migration of lipiodol for 2 days. An additional lymphangiography was performed. Injection of 5 mL was continued until lipiodol was detected in the left subclavian vein. Again, there was no definite leakage site on fluoroscopy or immediate follow-up non-contrast chest CT scans.

After the procedure, thoracic drainage decreased to 100 mL, which stabilized even after the resumption of a regular and then a high fat diet. The chest tube was removed on post-lymphangiography day 3. After further psychiatric management, the patient was discharged on post-trauma day 42.

The thoracic duct commonly originates from the cisterna chyli, ascends into the thorax, and crosses posterior to the aorta into the left posterior mediastinum (3). It often travels as far as the cervical region, turning laterally before terminating in the subclavian vein. Traumatic chylothorax is most commonly iatrogenic secondary to operative procedures, or due to complications arising from central venous catheterization (4). Isolated thoracic duct injury as a result of penetrating chest trauma without vascular or tracheoesophageal injury is extremely rare (1,2).

However, anatomic variations of the thoracic duct are common. In this case, a right hemopneumothorax and left pneumothorax without vascular and tracheoesophageal injury were observed at admission. Three days later, a large amount milky fluid was drained after a regular diet. Pleural fluid from a chylothorax is typically milky, but the pleural effusion will not always be milky or white due to bleeding in a trauma patient (3). Furthermore, if the patient is in the fasting state, typical pleural fluid may not be observed. These factors delayed the diagnosis of chylothorax in this case. Clinical suspicion is therefore important for the diagnostic process.

Treatment of chylothorax has not been clearly defined. In general, conservative management is recommended as the initial treatment. However, conservative management should not continue for more than 2-3 weeks because a longstanding chylothorax can result in malnutrition, immunodepression, and metabolic derangements. Early surgical ligation of the thoracic duct can result in a better outcome in patients with isolated thoracic duct injuries (2). However, surgery was not an option in our case because of the patient’s refusal to undergo surgery and the psychiatrist’s recommendation that the patient not undergo surgery due to diagnosis of PTSD.

In summary, even if the injury site is in a different location from the expected course and direction of the thoracic duct, a chylothorax should be considered in patients who subsequently develop a pleural effusion after penetrating chest trauma. In case of unsuccessful conservative management or an inoperable situation, lymphangiography should be considered as a therapeutic option.