Spontaneous pneumomediastinum (SPM) is defined as the presence of interstitial air in the mediastinum. It is a benign disease entity, which rarely occurs but responds well to conservative treatment (1). SPM is diagnosed with presenting symptoms, physical signs with air in the mediastinum, radiologic confirmation, and the absence of specific pathologic causes that are present in secondary pneumomediastinum (2,3). SPM was first described by Louis Hamman in 1939 (4) and published reports have described the nature of SPM and its clinical significance in only a small number of cases and definite treatment modality is not clearly identified yet. The purpose of this study was to review our clinical experience and detail the clinical approach on the management of SPM according to the severity of the disease with a literature review.

From March 1996 to December 2012, we retrospectively reviewed the data of patients admitted for treatment of SPM as an initial primary diagnosis in two institutions. We analyzed demographic data, presenting symptoms and signs, radiologic and interventional evaluation studies, and treatment courses. A precipitating factor was defined as a related recent event, which could trigger the development of SPM. Secondary pneumomediastinum due to specific causes were excluded: including trauma, esophageal perforation, recent intervention or surgery involving aero-digestive organs, abnormal findings in tracheobronchial tree, intrathoracic infections by gas forming organisms, mechanical ventilator or tracheostomy related conditions, or combined pneumothorax or emphysematous lung disease.

Sixty-four cases were diagnosed with SPM who were older than 10 years of age. We classified the patients three groups according to the extent of disease (mild: presence of minimal air shadow from larynx to carina level plus restricted cervical subcutaneous emphysema; moderate: mild criteria plus involvement of peribronchial tree and pericardial area with subcutaneous emphysema; and severe: moderate criteria plus extensive chest wall subcutaneous emphysema) by initial radiologic evaluation (Figure 1) and clinical course, including lab findings were analyzed. Institutional Review Board approved this study and individual informed consents were waived. 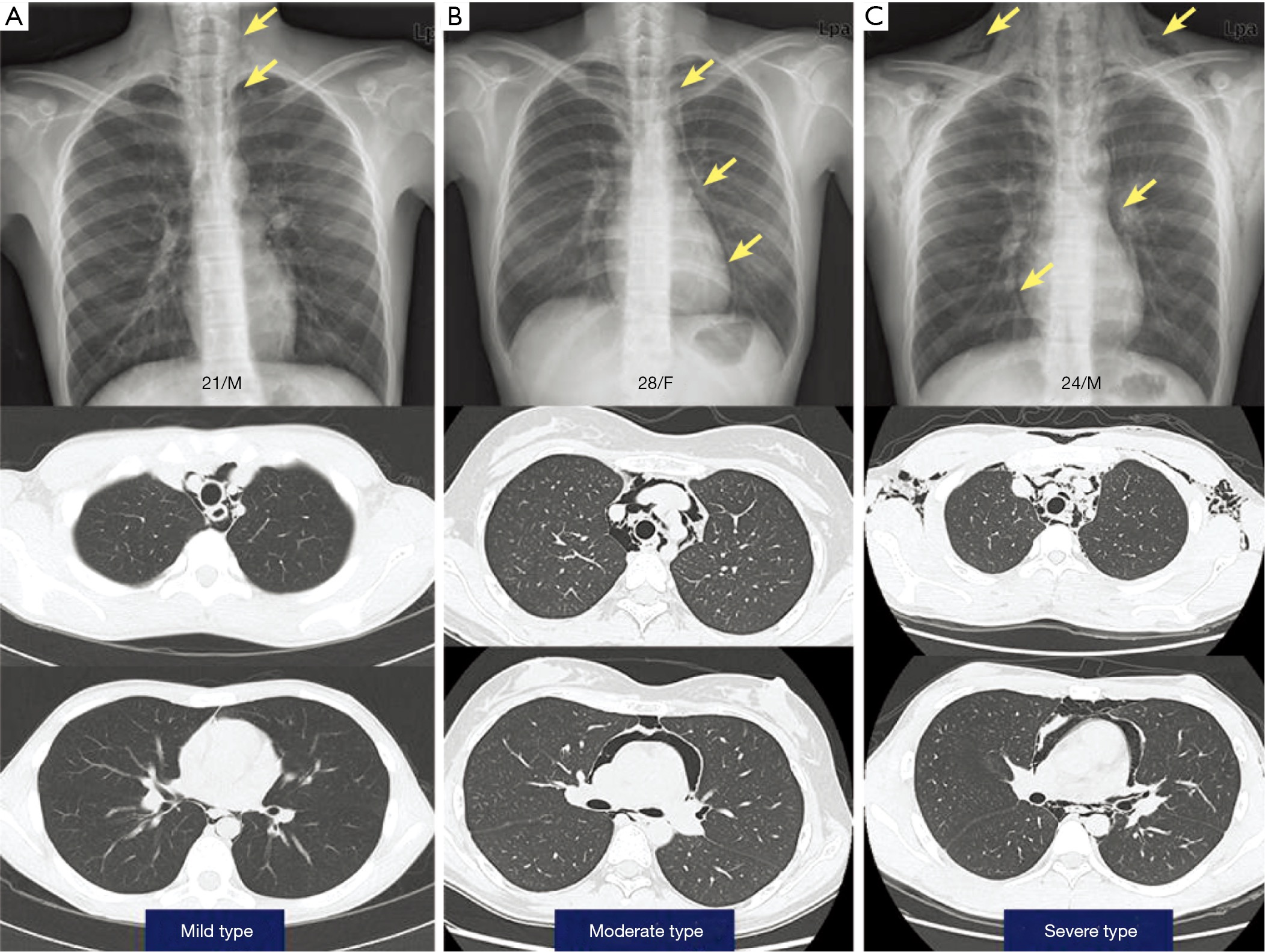 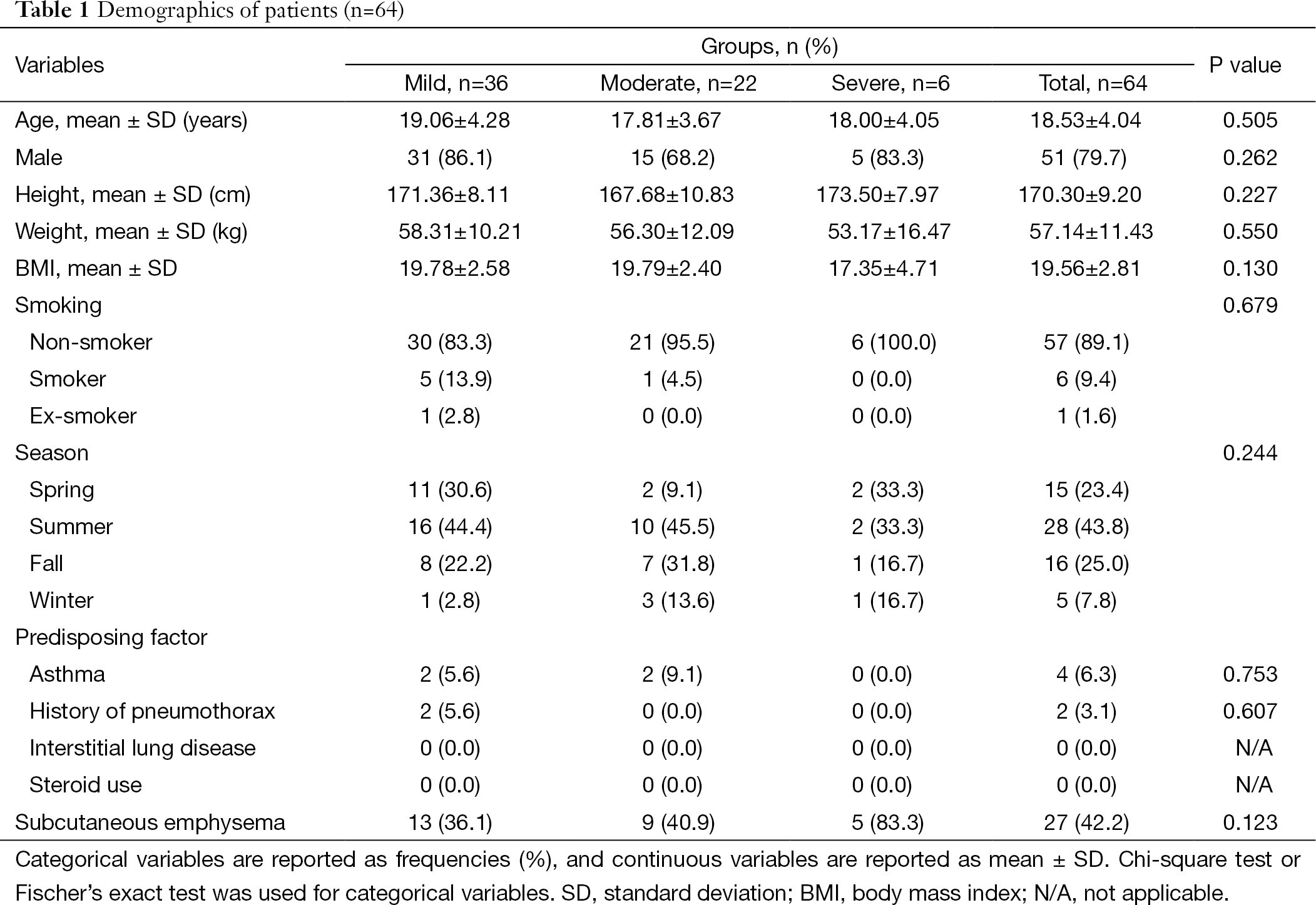 Plain chest radiography was initially done in all patients. The plain radiography of the neck was concomitantly checked in 37 (57.8%) patients. Fifty-four (84.4%) chest computed tomography (CT) and 7 (10.9%) neck CT scans were performed. Additional studies of 10 (15.6%) esophagograms, 4 (6.3%) endoscopies and 1 (1.6%) bronchoscopy was conducted; however, they revealed otherwise unremarkable findings. One patient with an abnormal endobronchial tumor was finally diagnosed as secondary pneumomediastinum and was excluded from the study. The mean duration between onset of symptoms and hospital presentation was 14.0±18.6 hours (range, 0.5-96 hours). Conservative management, consisting of bed rest with oxygen inhalation (64 patients; 100%), prophylactic antibiotics (57 patients; 89.1%), and analgesic medications (47 patients; 73.4%) were applied. The mean duration of hospitalization was 4.6±1.8 days (range: 1-10 days). Feeding restriction was conducted in 39 (60.9%) patients. There were no mortality or morbidity cases, such as mediastinitis, tension pneumomediastinum, or tension pneumothorax during hospitalization; furthermore, recurrence of SPM developed in only 1 (1.6%) patient in the moderate type after 12 months, which was also managed conservatively. Primary spontaneous pneumothorax developed 6 and 17 months later in 2 (3.1%) patients in the mild type who had no previous history of pneumothorax. There was no significant difference in clinical course and management between groups (Table 3). 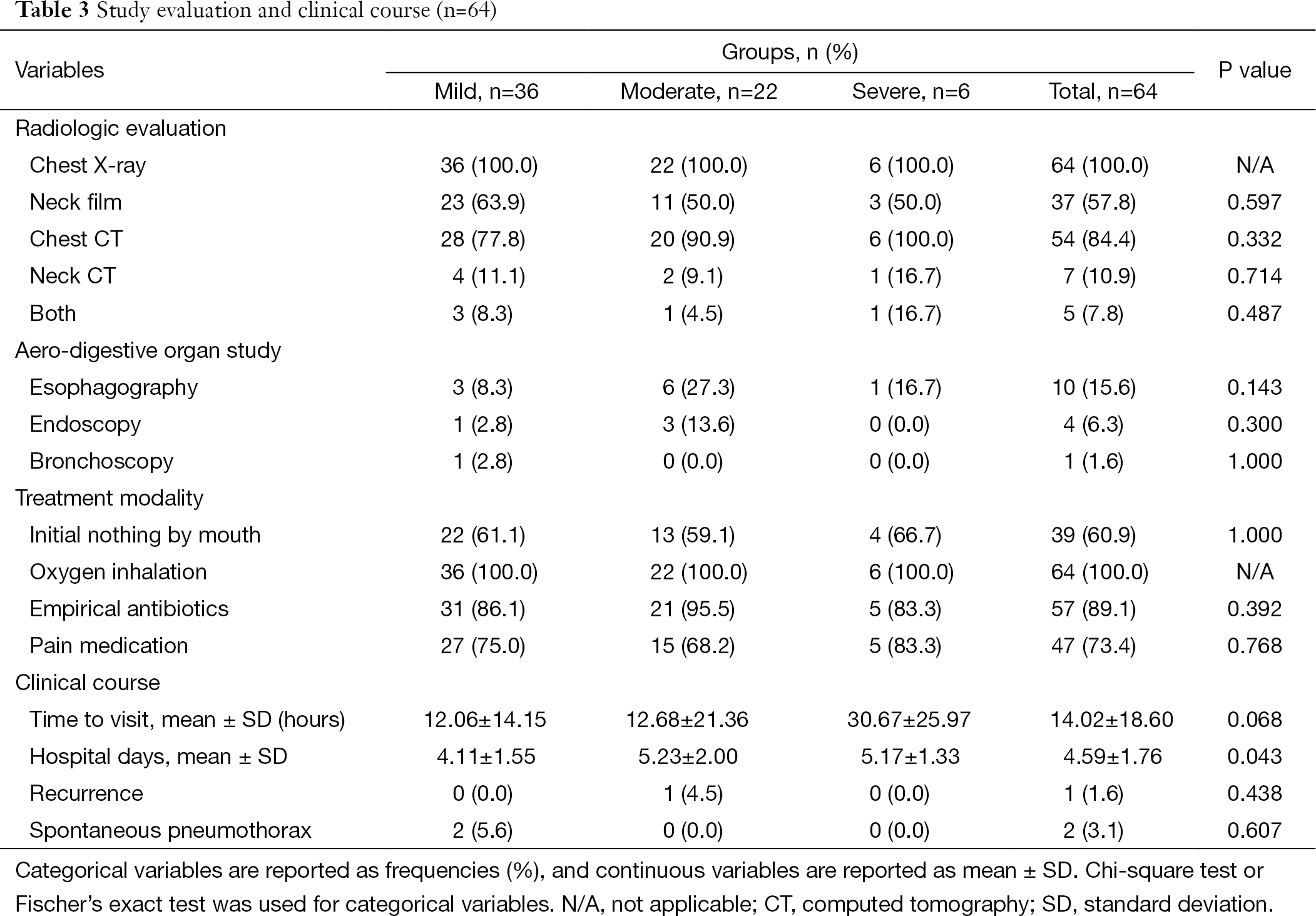 The most common symptom at presentation is chest pain, as it was found in our study. The other symptoms including dyspnea, sore throat or dysphagia were observed (5,9-13). Possible precipitating events include coughing, vomiting, defecation, parturition, or other physical activity that is associated with increased intrathoracic pressure (e.g., Valsalva maneuver, playing wind instrument); however, it can develop without a triggering event. Many western reports have described a relationship between smoking or drug abuse and the development of SPM. However, we found that the majority of patients were non-smokers (89%) and none used steroids or were drug abusers. According to the literature, precipitating events ranged from 39-100% (2,12). Our study also revealed that chest pain (78%) was the most common symptom; however, more than half of the patients did not experience a precipitating event.

Several studies reported that SPM occurs predominantly in young males, and that minimal, undetectable bulla can be the cause of the pneumomediastinum (2,9-14). Our results also revealed that SPM developed with high prevalence in young males, and it has an ectomorphic appearance similar to that of patients with pneumothorax. However, concomitant pneumothorax cases were excluded initially and definite bullae were not found in all patients who underwent a CT scan. This undefined relationship results in SPM being classified as a unique disease entity; thus, the treatment methodology should be different from that of spontaneous pneumothorax.

A simple diagnostic tool to detect SPM is either a plain chest radiograph or chest CT scan. Previous reports have noted that SPM can be confirmed by chest radiography alone in about 70% of cases; and the other 30% of patients can be diagnosed with a chest CT scan (9,14). In our study, all patients were suspected of suffering from a SPM by an initial chest X-ray; however, chest CT (84.4%) and neck CT (10.9%) scans were also conducted. We performed a CT scan to confirm the diagnosis as well as to exclude secondary pneumomediastinum; moreover, a diagnostic accuracy was achieved up to 100% with chest radiography, including additional CT scans. Further evaluation studies such as an esophagogram, bronchoscopy and endoscopy were performed in several cases to determine another obvious origins; however, as was the case in similar studies (15,16), all but one patient with an incidental endobronchial tumor, exhibited no abnormal finding. Thus, we demonstrated that a plain chest X-ray including a CT scan is an adequate evaluation procedure after a thorough history and physical examination to exclude secondary pneumomediastinum. Further invasive interventional studies such as bronchoscopy or esophagogram should be performed in highly suspicious cases of aero-digestive organ injury, such as Boerhaave’s syndrome or tracheobronchial tree rupture.

Oxygen therapy has been recommended in most previous reports because it is considered that the consumption of oxygen increases the diffusion pressure of nitrogen in the interstitium, promoting absorption of free air in the mediastinum. In our data, oxygen inhalation was applied in all 64 patients (100%). Although an elevated WBC (>10,000) was observed in 29 cases (45.3%) but most of patients (89.1%) were prescribed empirical antibiotics to prevent possible infection or disease aggravation such as mediastinitis. It remains debatable whether antibiotic treatment is essential. We suggest that empirical antibiotics should be minimized and applied in selected patients showing leukocytosis with fever and subsequent infection is likely. Moreover, oral feeding was restricted in 39 patients (60.9%) but a normal diet was given within 24-48 hours in most of cases. Neither evaluation nor clinical course documented digestive organ injury or abnormality in all cases including seven patients with a history of vomiting. We recommend that dietary restriction is unnecessary and early feeding is reasonable, except in the cases of highly suspected patient of Boerhaave’s syndrome. Discharge was determined by relief of subjective symptoms, with regressed pneumomediastinum on follow-up plain radiography. The duration of hospitalization was shorter in the mild type (P=0.043) and it is likely that the early disappearance of subjective symptoms and visible subcutaneous emphysema in a follow-up radiologic examination results in the clinical decision for early discharge without further evaluation.

Recurrence of SPM is rarely reported (5,12). One recurrence (1.6%) occurred in our study after 12 months but it responded well to conservative management. Two other male patients developed a spontaneous pneumothorax; one patient who developed blebs underwent thoracoscopic surgery 6 months later and another patient was managed with a closed thoracostomy 17 months later. We reviewed the chest CT scans in these recurrence and pneumothorax cases just after the SPM was diagnosed but we could not find any evidence of bulla lesion or emphysema. Most published reports demonstrated a very low incidence of recurrence, which responded well to conservative management; similar to our case in which routine outpatient follow-up was not recommended.

According to the literature, the presence of subcutaneous emphysema ranges from 40% to 100% (10,15); 27 cases (42.2%) showed subcutaneous emphysema in this study. There was no difference in demographics, evaluation studies, treatment modality and clinical courses between the groups (Tables 1-3). We also analyzed the relationship between disease groups by classification and laboratory markers of inflammation by test for linear trend. The trend analysis revealed significant result in time to visit only (P=0.023). Progression of the pneumomediastinum according to the increased time interval may show in a radiologic examination as a disease progression. However, there was no significant trend in hospital days, smoking history, WBC count, ANC count including ESR and CRP (Table 4)

Our retrospective review showed good results from conservative management, similar to that described by previous studies (13,17-21). Thus, we suggest that a chest X-ray and CT scan is adequate for diagnostic evaluation and that routine dietary restriction is unnecessary. Empirical antibiotics should be minimized and bed rest with oxygen inhalation or supportive pain control is adequate for the most of cases diagnosed with SPM.

SPM is adequately treated with conservative management regardless of the degree of severity of SPM. Thus, invasive evaluation studies and intensive treatment should be reserved for highly suspicious, selective cases of aero-digestive organ injury.

Funding: The statistical consultation was supported by a grant of the Korean Health Technology R&D Project, Ministry of Health & Welfare, Republic of Korea (HI14C1731).

Consents: Written informed consent was obtained from all the patients. A copy of the written consent is available for review by the Editor-in-Chief of this journal.