Surgical resection is the main treatment in local and locally advanced disease. Pneumonectomy (PN) and sleeve lobectomy (SL) are indicated when lung cancer is centrally located, invading the central bronchus and/or vasculature. PN is, however, associated with significant morbidity (1), mortality of 5.6% to 10% (1,2) and decrease in the health-related quality of life (HRQoL) (3). Furthermore, due to poor lung function, PN is not tolerated by a number of non-small cell lung cancer (NSCLC) patients. In our institution first SL in NSCLC was utilized in 1973 (4). In NSCLC bronchial SL has only recently gained greater acceptance as an alternative to PN. The main concerns with SL have been the possible increase in locoregional recurrence(5), complications related to the bronchial anastomosis (6), and the complexity of the operation. According to recent cohort studies (2,7-12) and meta-analyses (13,14) these concerns are not fully realized, and it has been presented that PN should only be implemented when SL is not feasible (5).

No randomized studies exist comparing PN and SL. Only one prospective short-term study evaluating quality of life after SL and PN has been performed by Balduyck et al. in 2008 (15). Because randomized trials that compare the SL and PN patients are difficult perform, we compared our own material with propensity matching. This gives more objective picture than pure retrospective evaluation (16).

Between February 2000 and March 2010, a total of 641 patients underwent surgery for NSCLC with curative intent at Helsinki University Central Hospital. From 107 patients with central lung cancer, 67 (10.5%) underwent PN and 40 SL (6.2%). The characteristics of the study patients and their clinical data were collected from patient records. For the study the immediate and basic cause of death and date was acquired from national registry. Preoperative data are presented in Table 1.

Each patient was preoperatively evaluated with pulmonary function tests (spirometry, diffusing capacity) and computed tomography of the chest and upper abdomen. The additional need for positron emission tomography-computed tomography (PET-CT), bronchoscopy, mediastinoscopy, CT-guided needle biopsy, the stair-climbing test, ventilation-perfusion scanning, and exercise testing was decided on an individual basis. For staging, the 6th edition of the TNM Classification was utilized (American Joint Committee on Cancer, 2002).

The status of comorbidity was objectively quantified based on the Charlson Comorbidity Index (CCI), which takes into account both the number and seriousness of the comorbid diseases and has been validated in lung cancer patients (17,18).

The sleeve lobectomies included 19 right upper lobes, 1 right lower lobe, 10 left upper lobes, and 8 left lower lobes. Furthermore, two patients underwent right upper sleeve bilobectomy. In seven patients, surgery also included pulmonary artery and in one superior vena cava resection and reconstruction. Of 67 pneumonectomies, 30 were right and 37 left. PN included pericardial resection (n=1), chest wall resection (n=4), and resection of the left atrium (n=1). The rate of PN decreased during the study period and that of SL increased. The death was considered as a cancer related if the immediate cause of death was cancer or the patient had a known metastatic disease (Table 2).

Table 2 Cause of death
Full table

In June 2011 all surviving patient [273] was send a generic and validated 15D HRQoL questionnaire (3,19), 230 patients (83%) responded, including 13 (32.5%) SL and 18 (26.9%) PN patients (Table 3). The 15D questionnaire has previously been used in operated NSCLC patients (3,19). The 15D HRQoL is a generic, 15-dimensional, standardized, self-administered HRQoL instrument that can serve as both a profile and a single index score measure (20). The 15D questionnaire consists of the following 15 dimensions: moving, seeing, hearing, breathing, sleeping, eating, speech, elimination, usual activities, mental function, discomfort and symptoms, depression, distress, vitality, and sexual activity. A set of utility or preference weights, elicited from the general public through a three-stage valuation procedure, is used in an additive aggregation formula to generate the utility score, i.e., the 15D score (single index number) overall dimensions. The maximum score is 1 (no problems on any dimension), and the minimum score 0 (deceased). A change <0.03 is considered clinically important (20).

Statistical analysis was performed using SPSS statistical software (version 21.0, Chicago, IL, USA). Results are reported as the median (range), and 15D as the mean ± standard deviation. The Student’s t-test was used to compare parametric values of groups, while the Mann-Whitney U-test was performed to compare nonparametric data between groups. Comparisons of survival were carried out using the log rank test. A P value less than 0.05 was considered as statistically significant, and 0.03 for the results of 15D. Consent was granted for the study by the Hospital ethics review board.

Seven SL patient and four PN patient didn’t return the questionnaire. Of these two SL patients had been re-operated (air-leak and empyema) and two PN-patients (empyema and hematoma). Non-responders had no major complications. 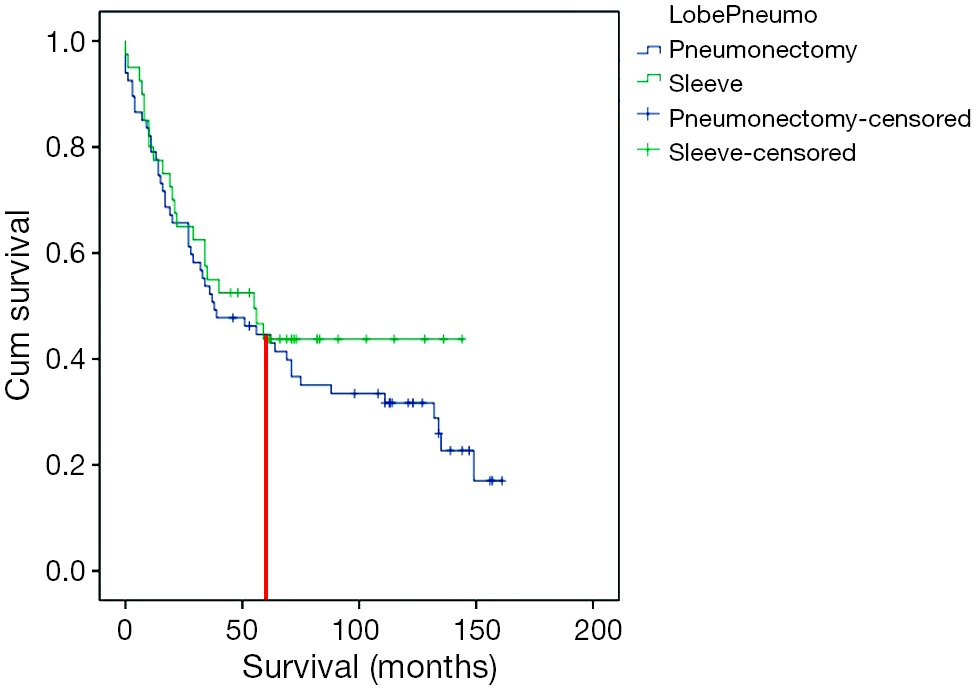 Postoperative HRQoL showed no significant difference between groups in the total score (P=0.545) (Figure 2). The only difference is seen for moving and breathing, but it was not statistical significant (P=0.263 and P=0.399). 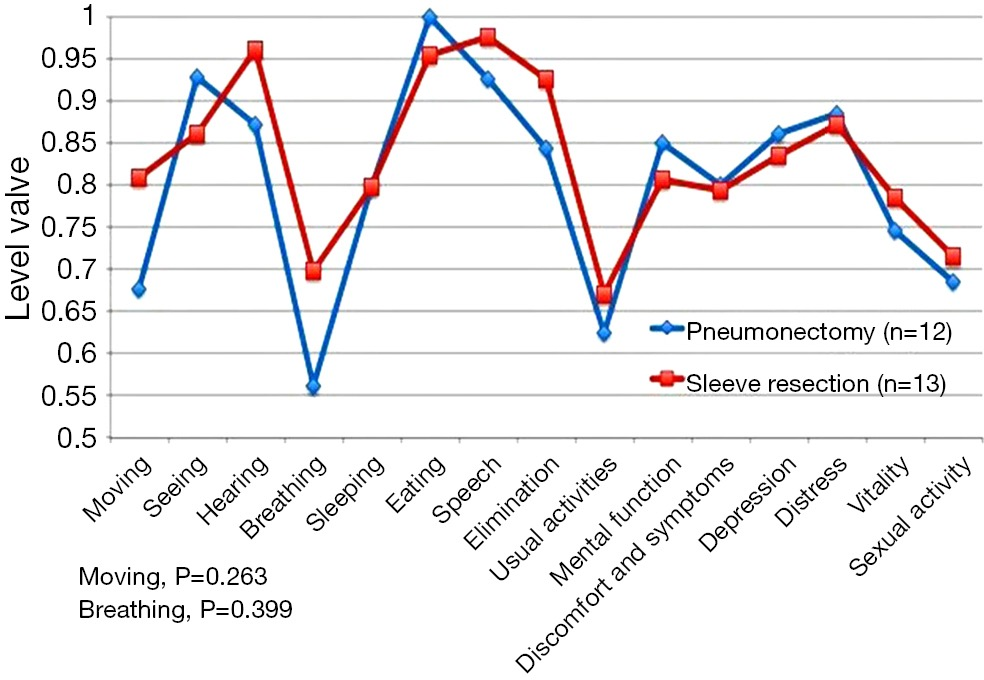 Figure 2 Postoperative quality of life. Comparison of 15D questionnaire scores in PN and SL patients. The only difference is seen for moving and breathing. SL, sleeve lobectomy; PN, pneumonectomy.

The main finding of this study was that the long-term results for PN and SL were comparable in terms of both survival and general HRQoL. In our series, the 5-year survival was similar between the groups. After 5 years of follow-up no deaths were observed among SL patients, but 43% of PN patients died and four patients (14%) cause of death was other than cancer.

A major concern regarding SL for lung cancer is the increased incidence of locoregional recurrence. A recent meta-analysis determined that the pooled locoregional recurrence in SL was 14.4% compared with 26.1% in PN, but there was no statistically significant difference (21). In our study, no differences were detected in the recurrence pattern between patient groups. More distant metastasis was observed in SL group than propensity-matched PN group, but the rate of locoregional recurrence was higher in PN group. In survival, no difference was noted in cancer-related death rate, which highlights the similarity in oncologic results between the two study groups. These findings are consistent with other studies showing a similar local recurrence rate between SL and PN, appearing similar after both procedures (5,8,22).

The overall 5-year survival following SL has ranged from 39% to 53% (2,4,5,8) and after PN from 27% to 49.8% (2). In our study, these figures were 45% for SL and 41.8% for PN (P=0.458). The survival trend appeared similar up to this point, but after 5 years, better survival was observed among SL patients. This finding may serve as an independent prognostic factor for long-term survival. However, further validated multi-center cohort studies are required to validate this finding.

Even with experience, SL is technically more challenging than PN. Ludwig reported that the incidence of bronchopleural fistula in PN patients was 3.6% and the incidence of anastomotic leakage in SL patients was 6.9% (2). In a recent meta-analysis by Shi et al., the pooled incidence of postoperative complications was 32.9% with SL and 27.1% with PN, but the difference was not statistically significant (21). At our institution, in the PN group we had 2/67 (2.9%) bronchopleural fistulas and 6/67 (8.9%) empyemas. No bronchial anastomotic short- or long-term complications occurred in the SL group. The amount of major postoperative complications was also less in SL group (P=0.009).

Pain and impairment of the functional health status can persist for 6-24 months after lung cancer resection (23). Similar morbidity and mortality is noted with SL when compared with PN (5,8,14,24). Better postoperative short term HRQoL (25,26) and better preservation of function have been reported in SL (5,8,14,24), when compared to PN patients. Moreover, SL is associated with better long-term overall survival (9,27). A prospective study by Balduyck et al. revealed that SL was characterized by a 1-month temporary decrease in physical and social functioning scores after surgery (15). Global quality of life, and symptom and pain scores approximated preoperative values 1 month after SL. In the 12-month follow-up period in PN patients, there was no return to the baseline in physical or role functioning (15). Goméz-Caro et al. demonstrated a negative impact of PN on global QoL, but recovery to the baseline did not differ between SL and PN (25). In 2011, Deslauriers et al. reported a follow-up of over 5 years among PN patients, concluding that most PN patients can adjust to living with one lung and can live a near normal life (28). In our study, no difference between SL and PN patients was noted in overall HRQoL. Between our study groups, we only noted non-significant differences were in dimensions of moving and breathing.

The surgery-to-questionnaire interval was shorter for SL patients and the time to recovery was shorter. This could have affected the results in favor of the PN group because of their longer time for adaptation, and the difference between PN and SL could have been more obvious if the time from operation to questionnaires had been equal. Thus, it can assumed that our PN patients may have adjusted to living with one lung, as also Deslauriers et al. reported 2004. If the study had been a prospective study, results might have differed.

In our institution, SL was carried out in 6.2% of all lung cancer patients. The relative frequency of PN decreased during the study period, and that of SL increased during the same interval. The main objective in surgery for NSCLC is to achieve good oncologic safety, which includes R0 resection of the tumor and radical lymphadenectomy.

In conclusion, PN is still a valid choice for central tumors when postoperative lung functions will remain reasonable and if with sleeve resection the surgical and oncological results may be compromised. This study was retrospective and lacked some serial data pre- and post-operatively. The relative frequency of PN decreased during the study period and that of SL increased. The small patient cohort could have introduced bias, but multi-center study with this operation type is difficult to organize. In addition patients did not complete the questionnaire at the same time from the operation, but of all operated patients 86% replied to the questionnaire, which is in the same range as in other inquiry studies.