Cardiac hypertrophy can be categorized into physiological hypertrophy and pathological hypertrophy (1). The former condition is induced by exercise training and adaptation to the special movement environment, accompanied by increased cardiac function (2). The latter, however, is usually developed as a response to pathological conditions such as valvular heart disease, hypertension, etc., and its main manifestations include thickened ventricular wall and increased heart weight (HW) and cardiac myocyte volume (3,4). In its early phase, pathological hypertrophy develops as a compensatory response that increases cardiac output and subsequently causes conditions such as cardiac dysfunction, energy metabolism impairment and electrophysiological damage. These conditions deteriorates in later stages and eventually could lead to heart failure, arrhythmia and sudden death (5,6). Up to now, the molecular mechanisms contributing to the development of cardiac hypertrophy are incompletely understood.

Asiatic acid (AA) is one of the triterpenoid compounds found in the centella asiatica. Many studies suggest that AA exhibits a variety of pharmacological effects, including anti-inflammatory (14), anti-hepatofibric (15), and neuroprotection benefits (16). Moreover, Huang et al. (17) recently reported that AA decreased the paw edema and inhibited inflammatory response in a mice model of paw edema, and the anti-inflammatory mechanisms of AA might be associated with the reduce in the level of IL-1β and NF-κB in the edema paw. In particular, it has been demonstrated that IL-1β is a potent modulator of cardiac hypertrophy, both in vitro and in vivo, through activating NF-κB signaling (12,13,18). Therefore, we hypothesized that AA may prevent cardiac hypertrophy by blocking IL-1β-activated NF-κB signaling. To test this hypothesis, an IL-1β-stimulated hypertrophic cardiomyocyte model and a pressure overload-induced cardiac hypertrophy model were used in the present study.

Animal handling and use is compliant with the “Guide for the Care and Use of Laboratory Animals” published by the US National Institutes of Health (NIH Publication No.85-23, revised 1996) and were approved by the Animal Care and Use Committee of Nanjing Medical University. The animals had free access to standard food and water and were housed on a 12 h light/dark cycle at 22 °C room temperature. The experiments were designed to minimize pain and the number of animals used.

Hearts were immediately removed from 1 to 2-day-old neonatal Sprague-Dawley rats anesthetized by diethyl ether under aseptic conditions and washed in Ca2+ and Mg2+ free phosphate-buffered saline (PBS). After the atria and aorta were discarded, the ventricles were minced and enzymatically digested with 0.1% collagenase type I (Sigma) and 0.125% trypsin (Gibco). The liberated cells were collected by centrifugation and incubated in 100-mm culture dishes (Corning) for 90 minutes at 37 °C in a humidified incubator with 5% CO2 air. Non-adherent cells were harvested as cardiomyocytes and seeded at a density 1×106 per well into 6-well culture plates (Corning). They were incubated in DMEM supplemented with 10% FBS, 1% penicillin/streptomycin and bromodeoxyuridine (BrdU, 100 µM, Sigma). After 48 h, the culture medium was replaced with DMEM containing 1% FBS. After 24 h of serum starvation, the cells were incubated with AA for 24 h prior to IL-1β (10 ng/mL) stimulation for 24 h. Untreated cells served as the controls. AA was freshly prepared as a stock solution in DMSO and diluted with sterile double-distilled water [0.1% (v/v) DMSO]. IL-1β was dissolved in sterile double-distilled water. There were five experimental groups: (I) control, (II) AA, (III) IL-1β, (IV) IL-1β + vehicle (DMSO-saline) and (V) IL-1β + AA.

Cell viability was monitored using a CCK-8 assay according to the manufacturer’s instructions. In brief, the cardiomyocytes were initially cultured at a density of 1×104 cells/well in 96-well plates. The cells were then pre-treated with various concentrations of AA (2.5-30 µM) for 24 h. CCK-8 solution (10 µL) was then added to each culture well followed by incubation for 4 h at 37 °C. The absorbance at 450 nm was measured using a microplate reader (Bio-Rad Laboratories, Hercules, CA, USA). All experiments were performed in triplicate, and cell viability was calculated as a percentage.

The cardiomyocytes were cultured on coverslips. Following IL-1β (10 ng/mL) stimulation for 24 h in the presence or absence of AA for 24 h, the cells were washed with PBS, fixed with 4% paraformaldehyde for 20 min and permeablized with 0.1% Triton X-100/PBS for 10 min. After blocking with 5% bovine serum for 30 min, the size of the cells was determined by staining the membranes with specific anti-sarcomeric α-actinin antibody (Sigma-Aldrich) and visualized under an inverted fluorescence microscope (Nikon, Tokyo, Japan). The size of the cardiomyocytes was determined using ImageJ software (NIH, Bethesda, MD, USA).

An animal model of pressure overload-induced cardiac hypertrophy was created by transverse aortic constriction (TAC) in male C57BL/6 mice [8-10 weeks of age, 20-30 g body weight (BW); Experimental Animal Center of Jiangsu Province, Nanjing, China]. To achieve constriction, a 7-0 suture was snugly tied twice around a blunt 27-gauge needle, which was positioned adjacent to the aorta between the right innominate and left carotid arteries and promptly removed following ligation. This produced a 60-70% constriction with an outer aortic diameter of approximately 0.4 mm. Acute and chronic mortality from the ligature procedure was <10%. Sham-operated controls consisted of age-matched littermates that underwent an identical surgical procedure, including the isolation of the aorta, only without placement of the ligature. Twenty-four hours after the operation, the mice subjected to TAC and the sham-operated mice were orally gavaged with AA 100 mg/kg/day or with the vehicle (DMSO-saline). After 2 weeks of TAC, the hearts were harvested and the ratio of heart weight to body weight (HW/BW) was calculated. The heart samples were frozen in liquid nitrogen and stored at −80 °C. AA was freshly prepared as a stock solution in DMSO and diluted with saline to yield a final AA concentration of 100 mg/kg BW [0.1% (v/v) DMSO] (based on our preliminary experiment). The vehicle control was administered a mixture of DMSO with saline [0.1% (v/v) DMSO]. There were five experimental groups:

All mice were anesthetized by a mixture of isoflurane (1.5%) and oxygen (0.5 L/min). Cardiac dimensions and functions were evaluated by echocardiography (Vevo 2100 equipped with a 30-MHz high-resolution phase array transducer, VisualSonics, Toronto, ON, Canada) after 2 weeks following TAC. The left ventricle (LV) was assessed in both parasternal long-axis and short-axis views. End-systole and end-diastole were defined as the phase in which the smallest and largest area of LV were obtained, respectively. Interventricular septum diastolic dimension (IVSD), left ventricular posterior wall thickness diastole (LVPWD), left ventricular end-systolic diameter (LVESD) and left ventricular end-diastolic diameter (LVEDD) were measured from the LV M-mode tracing with a sweep speed of 50 mm/s at the papillary muscle level. The percentage fractional shortening (%FS) was calculated using a standard formula: %FS = [(LVEDD − LVESD)/LVEDD] ×100. At each location, for each mouse, 6-10 beats were analyzed.

Nuclear proteins were isolated from LV samples and cultured cardiomyocytes, as described in a previous study (12). NF-κB binding activity was examined using an EMSA kit (Pierce Biotechnology, Inc.), according to the manufacturer’s protocols. For the competition assay, specific unlabeled NF-κB competitors (200-fold molar excess) were employed along with the binding reaction mixture. In brief, 2 µL of nuclear extract (at a concentration of 2 µg/µL) was incubated with 1 µL biotin-labeled probe containing the NF-κB binding domain (5'-AGTTGAGGGGACTTTCCCAGGC-3', 3'-TCAACTCCCCTGAAAGGGTCCG-5') at room temperature for 20 min. The reaction mixture was separated on 6.5% polyacrylamide gel electrophoresis, and transferred onto nylon membranes. The membranes were subjected to ultraviolet (UV) light cross-link for 1 min, and then incubated with blocking buffer containing stabilized streptavidin-horseradish peroxidase conjugate (1:2,000) for 15 min. The signals on the membranes were detected with the Chemiluminesent Nucleic Acid Detection Module (Pierce Biotechnology, Inc.). The NF-κB binding bands were scanned by G:BOX-CHEMI-XR5-E (Syngene, Frederick, MD, USA) and the relative intensities were analyzed with ImageJ software (NIH).

The hearts were fixed in 10% neutral formalin, dehydrated in 75%, 80%, 90% and 100% ethanol, transferred to xylene, embedded in paraffin and sectioned at a thickness of 4-5 µm, then stained with hematoxylin and eosin (H&E). The cardiomyocyte cross-section area (CSA) was measured using NIH ImageJ software (NIH). At least three different hearts with five separate fields of cells (total 50-70 cells for each heart), were quantified for cellular analysis.

Effects of AA (Figure 1A) alone on cardiomyocytes viability were first evaluated through the CCK-8 assay. As shown in Figure 1B, there was no noticeable change in the viability of cardiomyocytes treated with 2.5-30 µM AA for 24 h, but high concentrations of AA (40 and 80 µM) significantly decreased cell viability to 73.87% (P<0.05) and 15.99% (P<0.001), respectively. 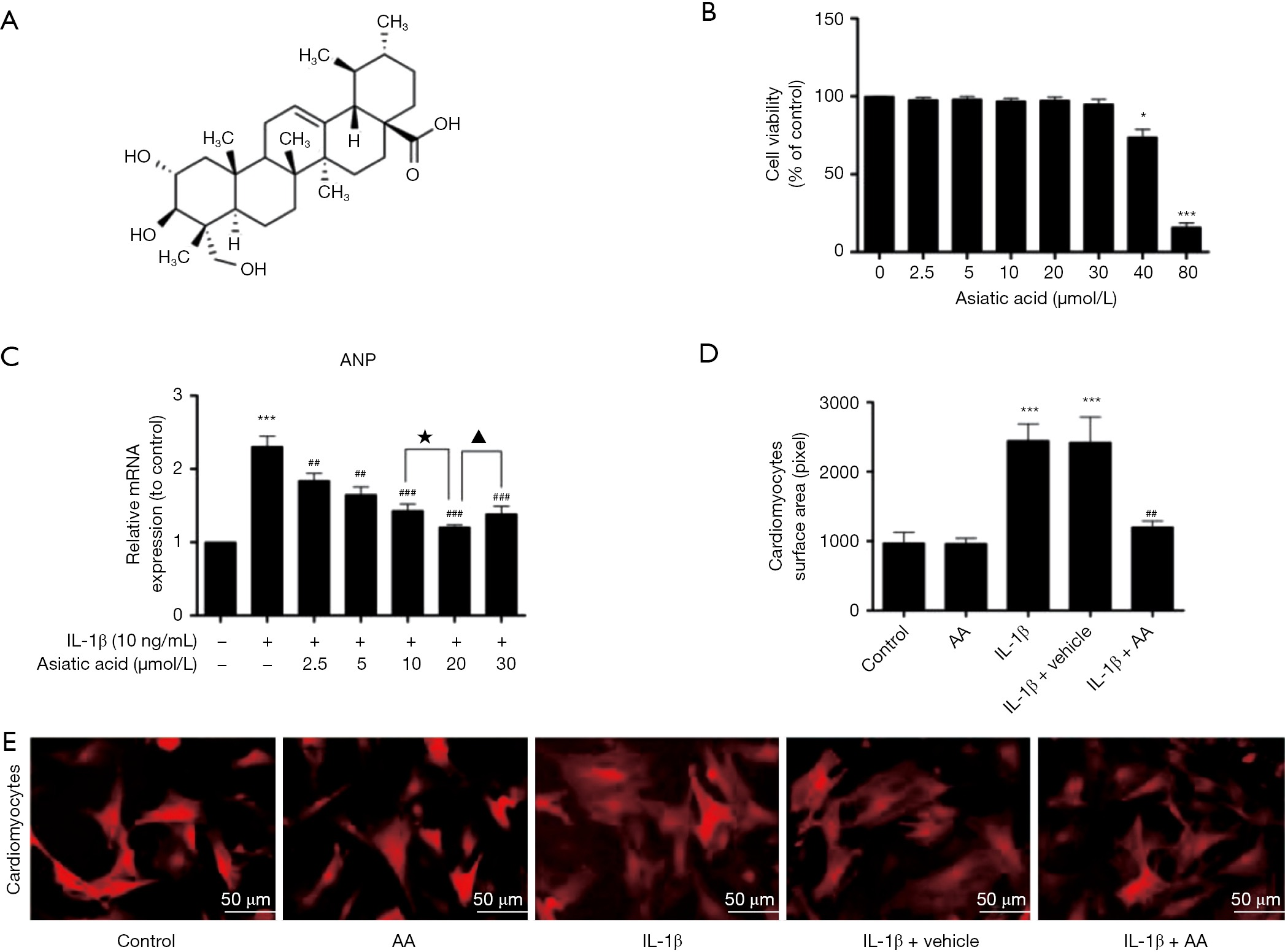 IL-1β has been reported to induce hypertrophic response in rat cardiomyocytes (19). To investigate whether AA can inhibit cardiomyocytes hypertrophy induced by IL-1β, the cells were treated with IL-1β (10 ng/mL) for 24 h in the presence or absence of AA (2.5-30 µM) for 24 h. The expression of ANP mRNA was examined by RT-qPCR. As shown in Figure 1C, IL-1β (10 ng/mL) stimulation remarkably increased the expression of ANP mRNA by 2.31 folds compared with the control group (P<0.001). AA (2.5-30 µM) pretreatment significantly decreased ANP mRNA expression, and the level of ANP mRNA in the AA (20 µM)-treated group was maximally reduced by 47.78% compared with IL-1β stimulated group (P<0.001). 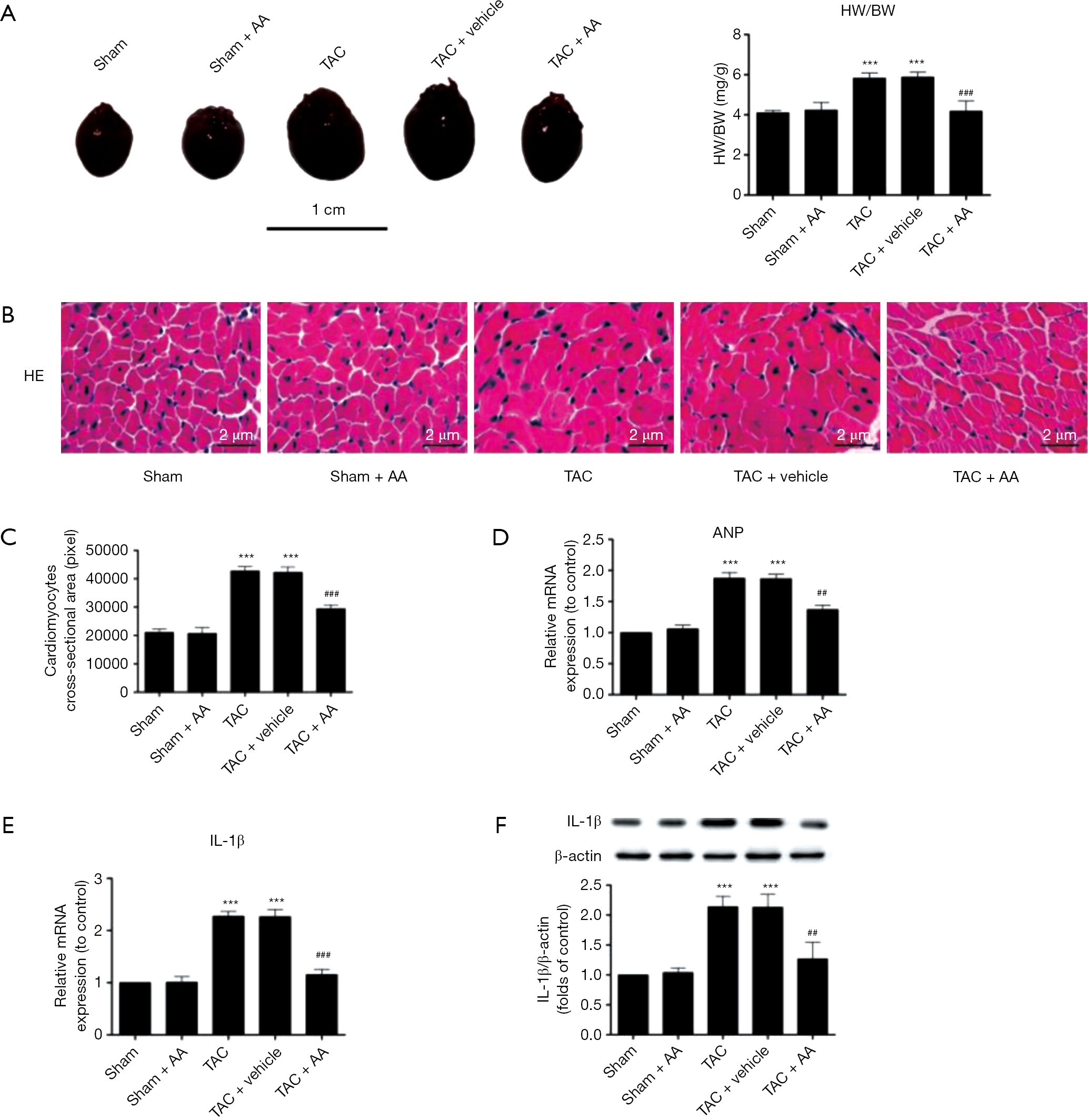 In addition, the heart sections were counterstained with H&E, pressure overload induced by TAC remarkably increased the cardiomyocytes CSA compared with the sham group (Figure 3B and C, P<0.001). In contrast, AA administration effectively reduced the TAC-induced increase in CSA (P<0.001).

As shown in Table 1, TAC mice displayed a remarkable increase in IVSD and LVPWD compared with the sham operated mice (P<0.001 and P<0.001 for IVSD and LVPWD, respectively). In contrast, AA administration effectively reduced the TAC-induced increases in IVSD and LVPWD by 22.24% (P<0.001) and 33.28% (P<0.001), respectively. LVEDD was decreased after 2 weeks of pressure overload (P<0.05), and AA administration prevented the TAC-induced decrease in LVEDD (P<0.05). In addition, %FS was significantly decreased by 22.25% at 2 weeks after TAC compared with the sham group (P<0.001). In contrast, AA treatment attenuated the TAC-induced decrease in %FS (P<0.001).

In the present study, we demonstrated that (I) IL-1β-activated NF-κB signaling was involved in the development of cardiac hypertrophy both in vivo and in vitro. (II) AA prevented not only the cardiomyocyte hypertrophic response induced by IL-1β, but also the upregulation of IL-1β levels and cardiac hypertrophy induced by TAC. (III) The anti-hypertrophic mechanisms of AA were found to be associated with the reduction in IL-1β expression and the inhibition of NF-κB binding activity. These findings support the conclusion that AA could be a promising strategy for the prevention and treatment of cardiac hypertrophy.

IL-1β is a cytokine playing a key role in inflammation and is mainly generated by activated mononuclear-macrophage. It has been previously demonstrated that IL-1β and its activated signaling pathway are involved in the pathogenesis of many cardiovascular diseases, including coronary atherosclerosis, myocardial infarction and myocardial remodeling, as well as heart failure (22,23). Furthermore, significantly increased expression of IL-1β accompanied with the progressive LV hypertrophy was observed in the pressure overload-induced hypertensive rats (24,25). Accordingly, our in vitro experiments demonstrated that neonatal cardiac myocytes stimulated with IL-1β had obvious hypertrophic response, manifesting as enlarged cardiac myocyte size and increased expression of embryonic marker gene ANP. Our in vivo experiments further addressed the role of IL-1β in the development of cardiac hypertrophy. After 2 weeks of TAC procedure, markedly enlarged heart as well as increased LVPWD and IVSD were observed in the TAC mice. And the expression of IL-1β and ANP were also significantly increased in the mice undergone TAC surgery. Taken together, these data suggested that IL-1β can induce a hypertrophic response in the pressure-overloaded heart.

In recent years, many studies have confirmed that AA can block the stimulation of cytokines such as IL-1β, tumor necrosis factor alpha (TNF-α), transforming growth factor beta 1 (TGF-β1) and their related signaling pathways, and relieve functional damage and fibrosis of liver cells (15,26). However, there is no relevant report on whether AA can prevent cardiac hypertrophy in response to pressure overload. Fortunately, our study revealed that AA significantly inhibited IL-1β-induced hypertrophic response of cardiomyocytes as reflected by reduction in the cardiomyocyte surface area and the inhibition of ANP expression. In TAC model mice, AA administration significantly attenuated pressure overload-induced cardiac hypertrophy and improved cardiac performance by reducing the dimensions of the left ventricular chamber. Furthermore, the expression levels of IL-1β and ANP in the pressure-overloaded myocardium were also reduced after AA treatment. Therefore, our results may be the evidence of AA’s ability to blunt the cardiac pathological hypertrophy by inhibiting IL-1β related signaling pathways.