Carinal resection and reconstruction in surgical treatment of bronchogenic carcinoma invading the carina still remains a challenge for thoracic surgeons because of technical difficulties and perioperative complications. Nevertheless, sleeve lobectomy is less damaging to the lung function and thus reduces operative mortality and improves the quality of life. With the development of video-assisted thoracoscopy surgery (VATS), locally advanced lung cancer, even with carina and/or distal trachea involvement, has been adapted for thoracoscopic lung resection and has obtained worldwide acceptance (1-7). This report describes a minimally invasive technique for VATS right upper lobe sleeve lobectomy combined with carinal resection and reconstruction.

The patient was a 51-year-old male, who was admitted into our hospital due to coughing and progressive dyspnea for over a month. He had a long history of heavy smoking, with a smoking index over 1,000 pack years. A PET-CT image revealed a 2.5 cm × 1.8 cm cauliflower-like tumor on the right main bronchus which involved the right anterior wall of the carina and distal trachea (Figure 1). Bronchoscopy demonstrated an intraluminal lesion obstructing the right main bronchus orifice which involved half of the carina and 1/3 of the left main bronchus. A biopsy returned a diagnosis of squamous cell carcinoma (Figure 2). Lung function was assessed via formal spirometry with a FEV1 of 1.26 (42% predicted), a FVC of 3.11 (85% predicted), and a FEV1/FVC ratio of 50%. The patient’s preoperative routine examinations did not reveal significant surgical contraindication (Figure 3).

Figure 1 (A) Coronal computed tomography showed a mass in the lower trachea; (B) the image of the cauliflower-like tumor. 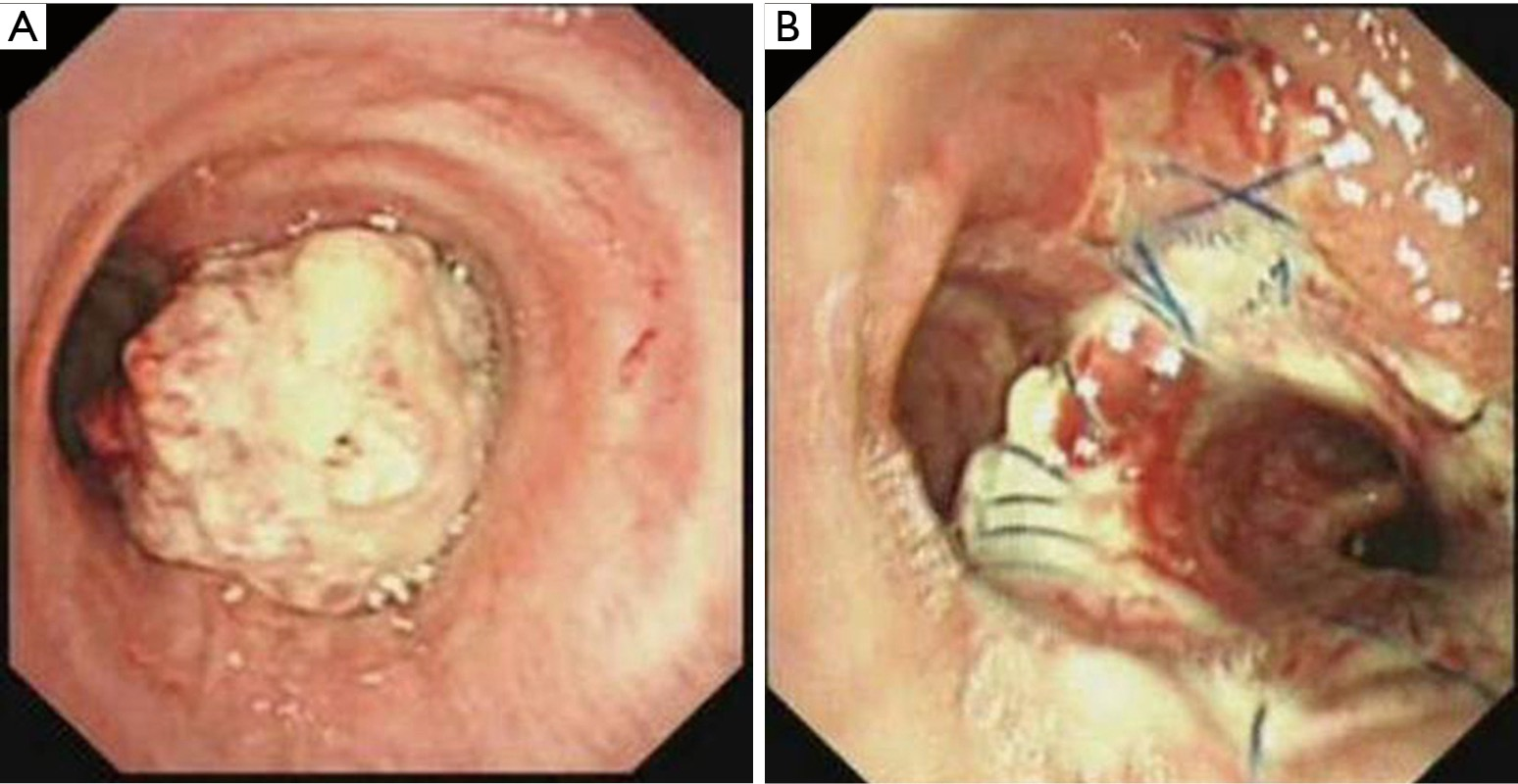 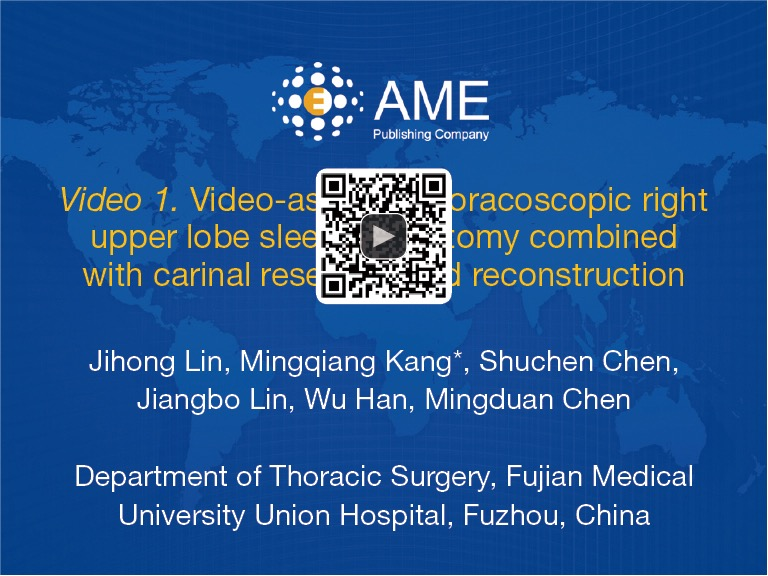 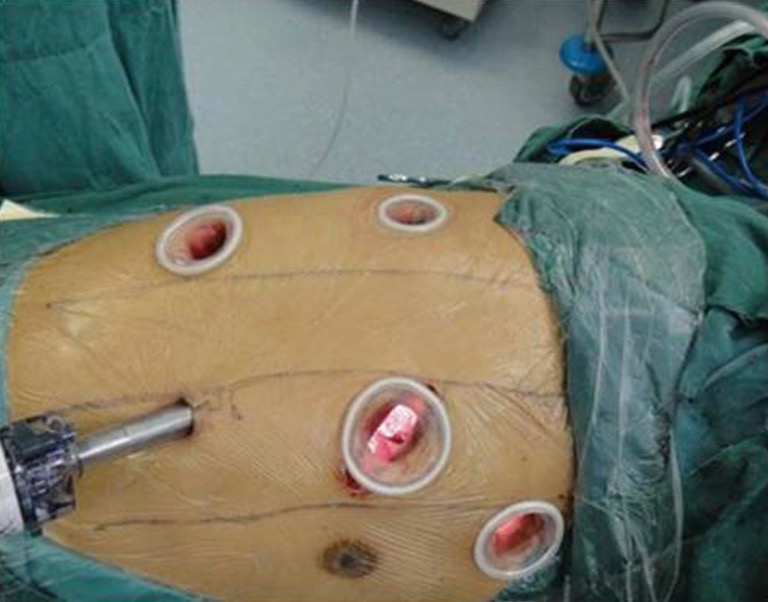 Figure 4 Location and size of the five access ports.

The first step in the procedure was to divide the inferior pulmonary ligament, and the entire right hilum was mobilized. The right upper lobe vein was dissected with a 30 mm vascular stapler while avoiding injury to the middle lobe vein. Two branches of the posterior ascending artery and the truncus anterior branch of the right pulmonary artery were then divided with a stapler. After divided the arterial supply of the right upper lobe, we identificated the arteries of the middle and lower lobes, then we used a 60 mm linear stapler to sever the major and minor fissures. The azygos vein was dissected and stapled. Following resection of the hilar lymph node and the No. 7, 4 and 2 lymph nodes, the bronchial sleeve resection and carinal resection and reconstruction began. The bronchus was divided, and the proximal and distal lengths for sleeve resection were designed according to the degree of tumor invasion. The distal trachea and both main bronchi were fully released to ensure adequate surgical exposure and to reduce unnecessary tensile force during anastomosis. Traction sutures were routinely placed on the lateral walls both above and below the anastomosis. The distal right intermediate bronchus was cut using a scalpel, and the proximal ends were dissected circumferentially by scalpel and scissors, to preserve the left posterior wall of the carina. The resected lobe was then extracted with a bag (Figure 5). 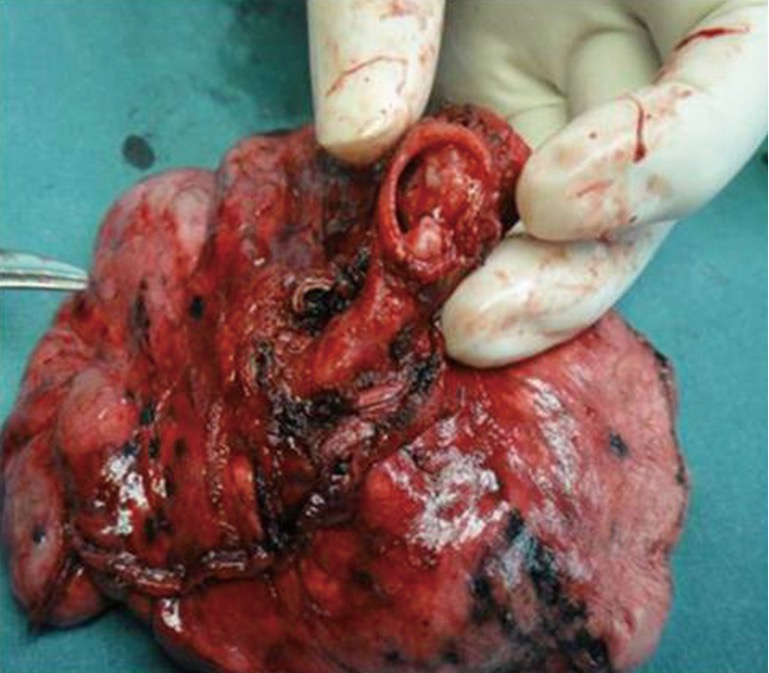 Figure 5 Photograph of the pathologic specimen.

After a negative margins confirmation by a pathological diagnosis of a frozen section, airway reconstruction was immediately initiated. The side of the lower segment of the trachea was first sutured with a single running 3-0 prolene suture to narrow the rim of the proximal trachea to better matched the distal right intermediate bronchus, and a nerve hook was used to prevent thread winding. A plan for intermittent left lung ventilation was then harnessed to allow the accurate placement of an anastomotic suture. This procedure was accomplished with the cooperation of the surgeon and the anesthesiologist. For the anastomosis between the membranous part and the right bronchus intermedius, we used single 3-0 prolene running sutures beginning at the deepest site. Two-thirds of the circumference received end-to-end anastomosis. The tracheal cartilage portion of the remaining one third of the opening was trimmed to create a circular shape. The right bronchus intermedius was anastomosed to this opening with continuous 3-0 prolene running sutures and was strengthened by 3-0 single-strand absorbable suture. After confirming that there was no air leak from the anastomosis, a pedicled intercostals muscle flap was used to circumferentially wrap each anastomosis. Two sets of thick securing sutures were applied from the chin to the chest, which forced the patient’s neck to be flexed and reduced tension on the anastomosis. There was no serious morbidity that occurred in the perioperative period (Figure 2), and the patient was discharged after 14 days.

It is difficult and rare for a carcinoma of the right upper lobe to involve the right main bronchus and lower trachea. Carinal resection and reconstruction are complicated, which are associated with high perioperative morbidity and mortality. With the development of VATS, a minimally invasive method may present a new alternative strategy for the treatment of tumors of the trachea or carina (1-5). In this case, there were many distinct challenges and careful coordination was required between the surgical and anesthesia teams. We used a double-lumen endotracheal intubation and left lung ventilation to facilitate the operation, and intermittent left lung ventilation was harnessed to allow the accurate placement of an anastomotic suture. This avoids the use of a second sterile endotracheal tube. Moreover, multiple interrupted sutures are preferred in bronchial anastomosis. Running sutures are proven to be safe, and sometimes interrupted sutures are needed to strengthen the anastomosis, and prevent any airway leakage. However, this demanding procedure should be performed by experienced thoracic surgeons and in selected patients.