Sleeve lobectomy achieves complete resection of the intratracheal tumor with parenchyma preservation, a standard treatment of central lung cancer in selected patients (1,2). Due to its complex procedure, video-assisted thoracic surgery (VATS) sleeve lobectomy was once considered a contraindication. However, thanks to the improvement of technique and equipment, it has now become a common approach for minimally invasive thoracic surgery (3). Generally, 3-4 ports are used, and it was not until 2013 that the single-incision VATS sleeve lobectomy was first finished by Gonzalez-Rivas et al. (4). Left lower lobectomy with sleeve bronchial resection is considered as one of the most complex thoracic surgical procedures (5). Description of left bronchial anastomosis by uniportal VATS approach is limited. Here we present a technical procedure for left lower lobectomy with a sleeve resection by single-incision VATS.

The technique of single-incision VATS sleeve lobectomy described here is currently employed in the unit of general thoracic surgery at the Second Affiliated Hospital of Zhejiang University, School of Medicine.

A 51-year-old male was hospitalized for weight loss and coughing for three months. Though a heavy smoker with 30-cigarette a day for 30 years, he had a healthy medical history and no co-morbidities were recorded. Computed tomography (CT) scan revealed a congestion in the left lower lobe bronchus, accompanied by atelectasis (Figure 1). Bronchoscopy indicated a neoplasm at the orifice of left lower lobe bronchus (Figure 2). Pre-operative pathology confirmed a poorly differentiated squamous cell carcinoma. Lung function was assessed via formal spirometry with a FEV1 of 2.83 (93.0% predicted), a FVC of 3.32 (89.2% predicted) and an FEV1/FVC ratio of 85.12%. 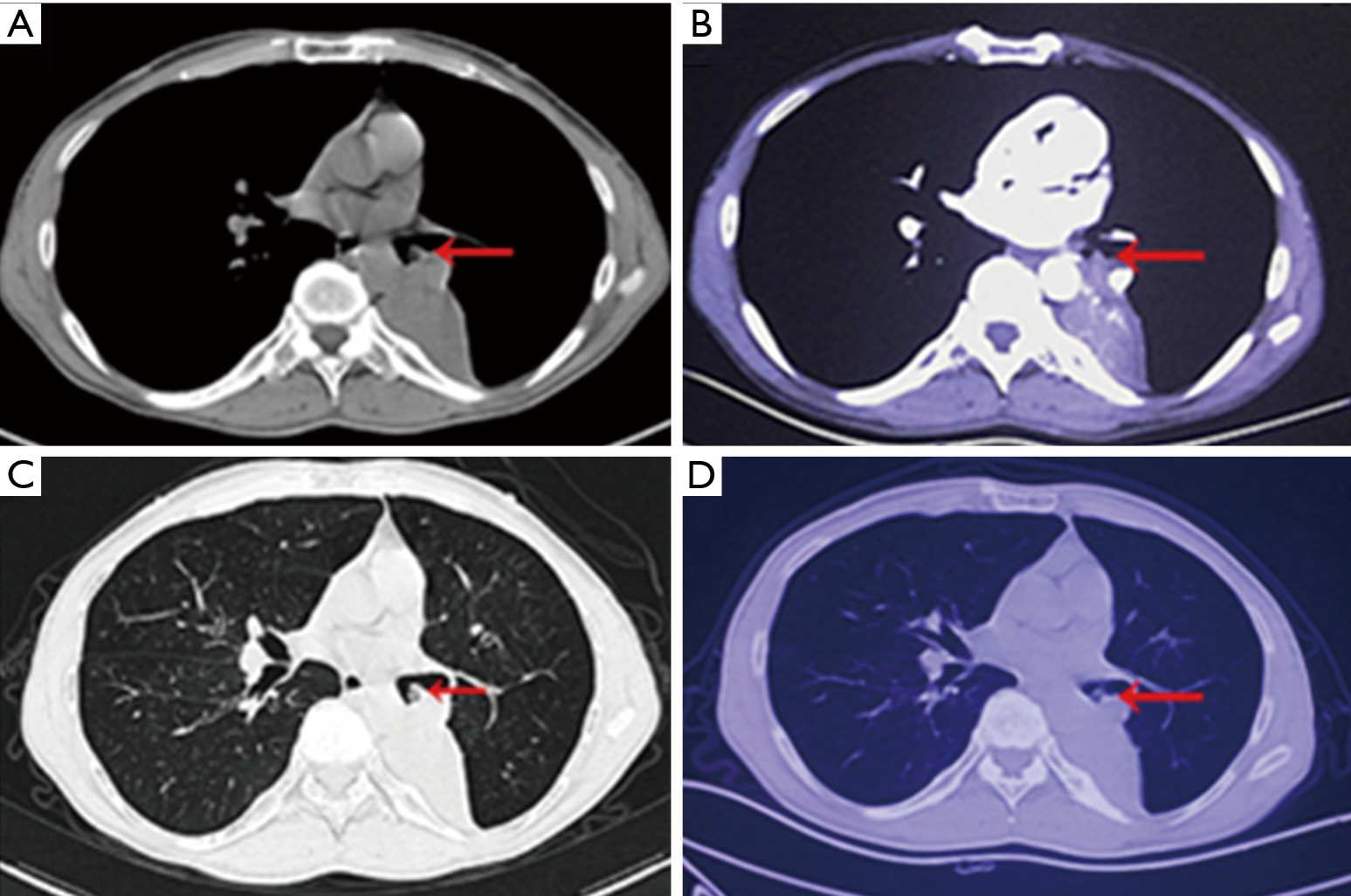 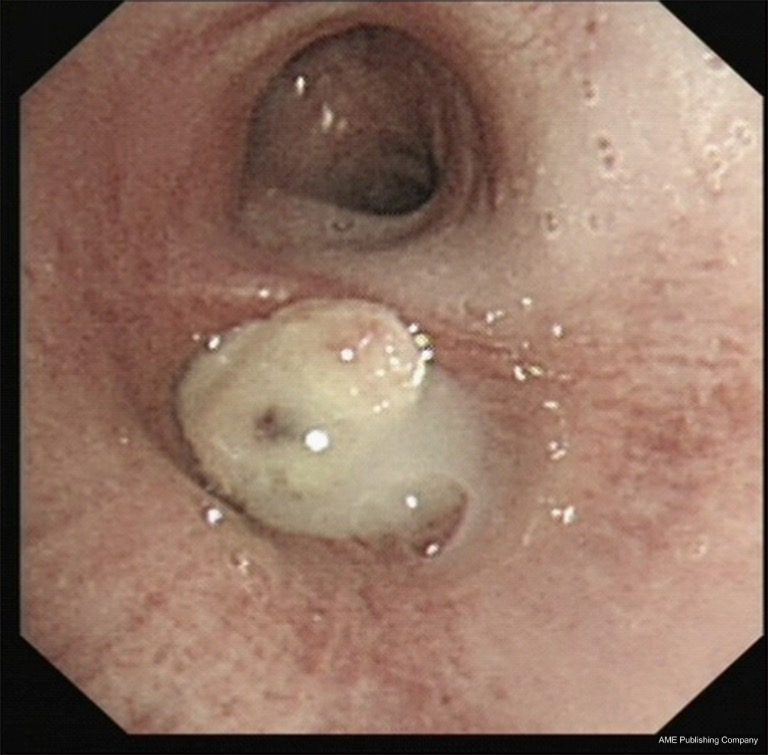 Figure 2 Bronchoscopy indicated a neoplasm at the orifice of left lower lobe bronchus. 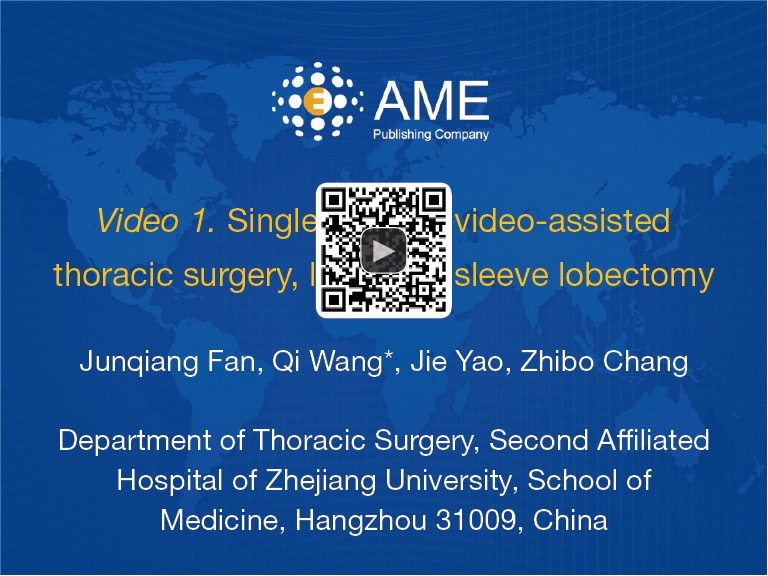 A 4-cm incision was made in the fifth intercostal space (Figure 4), posterior to the anterior axillary line. Skin and muscles were incised along the upper edge of the rib, and a wound protector was inserted to prevent contamination and tumor seeding. No rib retractor was used. The incision was made according to the texture of serratus anterior muscle and no muscle was transacted. 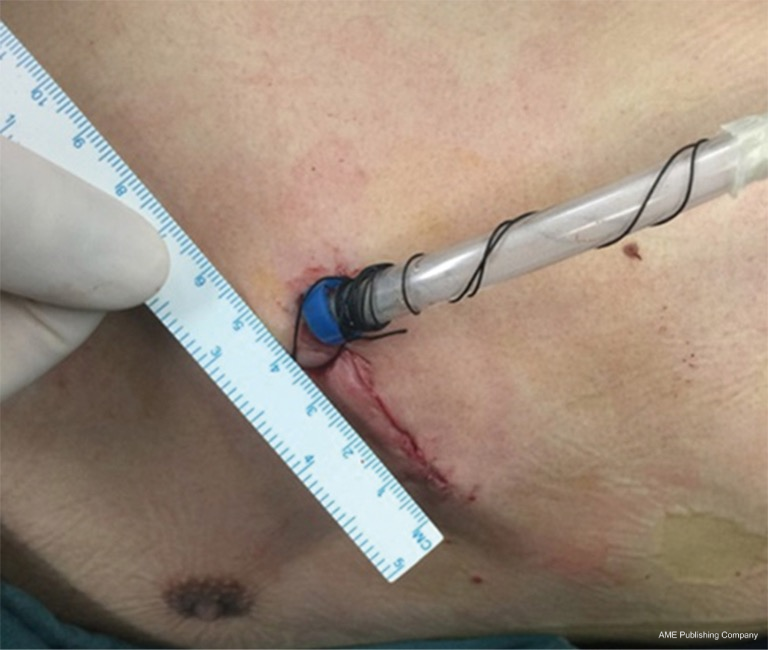 Figure 4 The incision was about 4 cm long, posterior to the anterior axillary line.

A 30° 10 mm high definition video thoracoscopy was placed at the posterior edge of the incision and fixed with a section of infusion tube to reduce assistant’s fatigue. After confirmation of tumor resectability, dissection was commenced in the oblique fissure by ultrasonic scalpel. The lower lobe branches of pulmonary artery were mobilized. The basal and dorsal segmental arteries were ligated and cut off. The remaining hypoplasia oblique fissure was separated by blue cartridge of Echelon SC60 (Johnson & Johnson, USA). The station 11 lymph nodes were then collected. The dissection was continued by the separation of the inferior pulmonary ligament, and stations 8 and 9 lymph nodes were excised. The lung was pulled forward to expose the posterior mediastinum. The inferior pulmonary vein was mobilized and stapled with white cartridge of Echelon SC60 (Johnson & Johnson, USA). Then the station 7 lymph nodes were completely removed. The small vessels between esophagus and sub-carinal lymph nodes were cauterized with ultrasonic scalpel and electrocautery hook.

We continued the procedure with bronchial anastomosis. The secondary carina and left main bronchus were completely transected by a scalpel. The left lower lobe was placed in a specimen bag, removed and sent for pathological frozen section. A negative bronchial margin was confirmed. The anastomosis was continuously sutured from posterior to anterior with a 4-0 prolene. We twined the prolene around a folded gauze to avoid the twisting and twining of the sutures, which would otherwise significantly prolong the procedure or even make the anastomosis started over again.

Then we pulled the lung backward to expose the superior mediastinum. The stations 5 and 6 lymphadenectomy were performed with special care to preserve the phrenic nerve and the left innominate vein. The left recurrent laryngeal nerve was ascertained and preserved during the station 4 lymphadenectomy.

Finally, to check the bronchial anastomosis, the thorax was lavaged with distilled water and the lung was inflated. No air leak was found. Intercostal nerve blockage was used for perioperative analgesia.

The total procedure took about 244 minutes, and estimated 50 mL blood loss was noted.

The patient was monitored at the intensive care unit after surgery for one day. Discharge to a general ward took place once hemodynamics and spontaneous respiration had stabilized. On postoperative day (POD) 1, the fluid drainage was around 150 mL, and the chest X-ray showed satisfied right lung inflation (Figure 5). The chest tube was removed on POD 2, and the patient was discharged on POD 3 uneventfully. Final pathology revealed a T2N0M0 squamous carcinoma. Postoperative adjuvant chemotherapy was implemented as planned. Two months later, no locoregional recurrence was found (Figure 6). 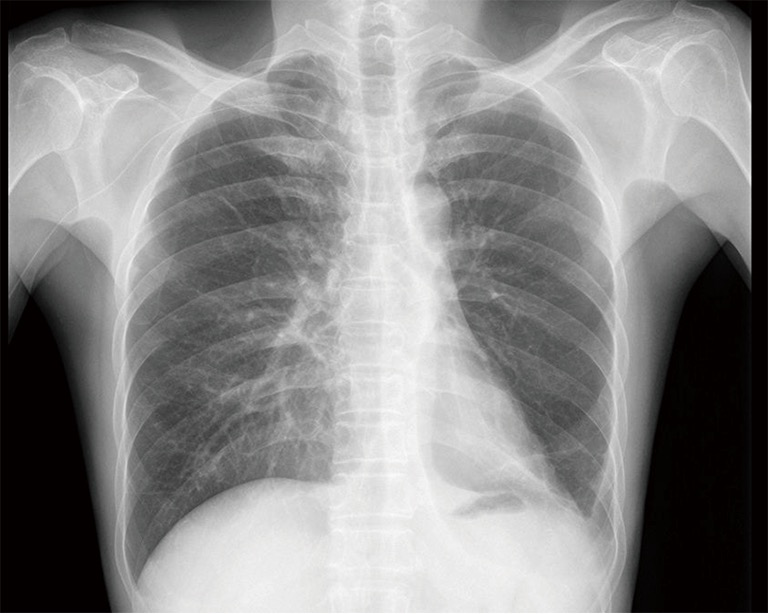 Bronchoplastic resections with preservation of parenchyma should be considered when treating endobronchial carcinoid tumors. Compared with pneumonectomy, sleeve lobectomy achieves comparable long-term survival with better postoperative quality of life (QOL) and fewer postoperative complications (7-9). Sleeve lobectomy is generally performed by thoractomy, which would induce severe trauma, slow recovery and great pain. As technique advanced and sophisticated skills accumulated, these operations can be completed by VATS. The number of incisions for thoracoscopic lobectomy varies: 3-4 ports are typical, but a single incision is also feasible (10).

The left lower sleeve lobectomy is difficult due to some anatomical factors such as the presence of the pulmonary artery, the atrium and upper lobe vein (11). There are some key points: first, the sub-carinal and interlobar lymphadenectomy (station 7 and 11) is imperative for sufficient exposure of bronchus; second, adequate mobilization of the secondary carina and left main bronchus is needed; third, continuous suture of anastomosis in proper order could shorten the procedure; fourth, great attention should be paid to the avoidance of the sutures twisting (5), which would remarkably prolong the anastomosis procedure. Based on our experience, to wind the prolene around a folded gauze could effectively avoid the twisting and twining.

The selection of the incision is crucial for the success of sleeve lobectomy and bronchial anastomosis single-incision VATS (5). In this case, we made a muscle sparing incision at the 5th intercostal space between the anterior and the posterior axillary line. A wound protector was used to reduce the damage caused by a trocar, and to keep off the errhysis of the incision which would blur the camera lens. The camera was placed at the posterior edge of the incision, which could provide a panoramic view of the whole chest. And the operation could be completed in a more familiar manner as in the traditional thoracotomy approach, which could be helpful for the surgeon to master the technique of uniportal VATS and shorten the learning curve.

The success in performing uniportal VATS sleeve lobectomy lies in the skills and experience accumulated over years of VATS surgery. According to our experience, we suggested that the transitional period of 2-ports may be not necessary, and the direct transition from 3-4 ports VATS to single-port VATS is safe and feasible. An experienced cameraman is also indispensable for a successful uniportal VATS operation. However, the demand of a steady camera holding arm would easily induce muscle soreness and fatigue, which suffers the cameraman and significantly influence the surgical safety. During the operation, the camera is mostly placed at the posterior part of the incision. So, we bind a section of infusion tube to the thoracoscope and fix the tube to surgical drape to relieve cameraman’s tiredness. For sleeve lobectomy, careful patient selection is essential, and it is better to choose cases with relatively small tumor.