A solitary fibrous tumor (SFT) is a rare mesenchymal tumor that mainly originates in the pleura. SFTs usually show a benign clinical course, but may recur and metastasize after surgical resection. Histological features of malignancy have also been described in some cases. We report a case of an SFT that exhibited repeated local recurrence with positive pleural lavage cytology (PLC) findings. 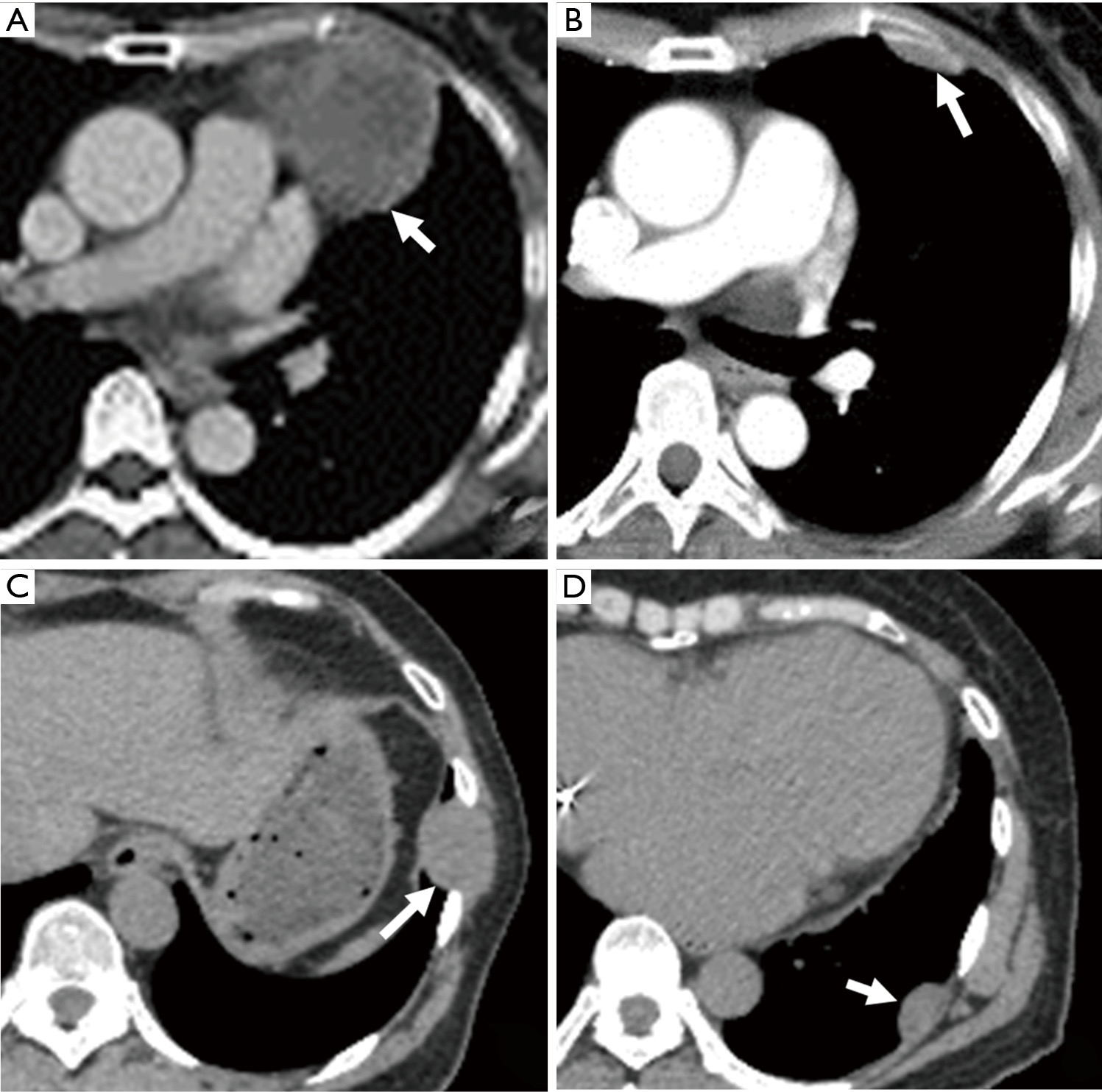 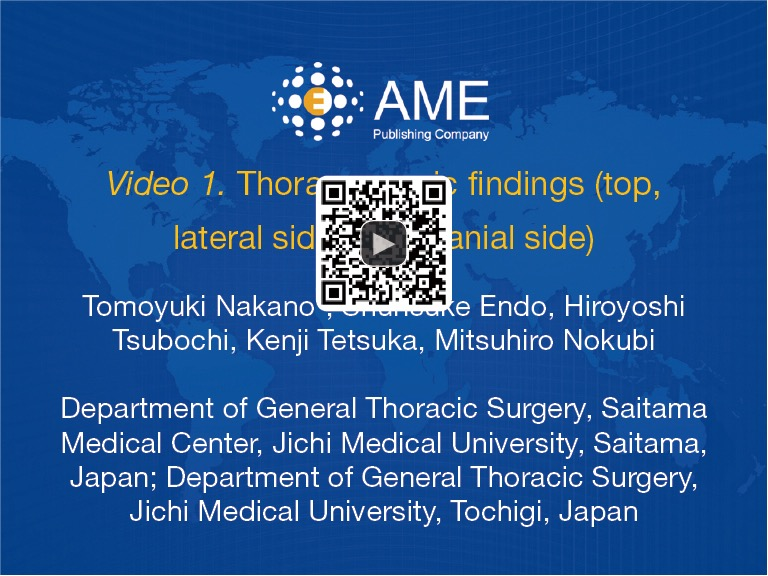 Figure 3 Thoracoscopic findings (top, lateral side; left, cranial side) (1). Exploratory left-sided thoracoscopy showed that two tumors arose from the parietal pleura in the eighth intercostal space with visceral pleural dissemination. The anterior tumor arose from the port site and was resected with the costal periosteum and intercostal muscle through an additional 7-cm-long mini-thoracotomy. Available online: http://www.asvide.com/articles/704

A pleural tumor was found on a routine chest X-ray of a 55-year-old woman. Chest computed tomography (CT) revealed that the tumor was located ventral to the pericardium in the left thoracic cavity and measured 7.0 cm × 6.0 cm × 5.0 cm (Figure 1A). Surgical findings via left-sided thoracoscopy revealed no pleural effusion, pleural dissemination, or invasion to adjacent organs. The tumor arose from the mediastinal pleura and was completely resected. The cut surface revealed a white edematous solid tumor. Histopathologically, the lesion mainly comprised non-atypical spindle-shaped tumor cells in a so-called “patternless pattern” (Figure 2A). Necrosis, hemorrhage, and pleomorphism were not significant. Immunohistochemical staining demonstrated that the tumor cells were positive for CD34 and bcl-2, and the local Ki-67 labeling index positivity was approximately 15%. Therefore, the tumor was diagnosed as an SFT.

Three years later, routine chest CT revealed pleural thickness in the left anterior thoracic cavity and a lesion measuring 3.0 cm × 2.5 cm × 1.5 cm (Figure 1B). Pleural dissemination and pleural effusion were not found intraoperatively, but intraoperative PLC suggested the presence of tumor cells. The tumor was resected by cutting into the intercostal muscle on the outside, performing lung parenchyma wedge resection via a stapler, and securing an adequate margin from the stalk of the visceral pleura on the inside. Complete resection was uneventful. The cut surface revealed a white lobulated solid tumor arising from the lung parenchyma and growing expansively to the visceral pleura side. Histopathological examination and immunohistochemical analysis revealed the same findings as the previous tumor. Postoperative PLC showed mildly atypical tumor cells (Figure 2B).

Seven years after the initial surgery, routine chest CT revealed a left intercostal tumor (2.5 cm × 2.5 cm × 1.0 cm) (Figure 1C) and a pleural tumor (3.0 cm × 3.0 cm × 2.5 cm) on the left lung (Figure 1D). Exploratory left-sided thoracoscopy showed that two tumors arose from the parietal pleura in the eighth intercostal space with visceral pleural dissemination (Figure 3). The anterior tumor arose from the port site placed during the previous thoracoscopic surgery. The tumor was resected with the costal periosteum, intercostal muscle, and peripheral parietal pleura through an additional 7-cm-long mini-thoracotomy in the 8th intercostal space. The posterior tumor was resected with only the peripheral parietal pleura. Many small nodules were found on the visceral pleura; the largest was present on the left S6 and removed by lung parenchyma wedge resection using a stapler. The cut surface of the specimens revealed white solid tumors. The anterior tumor did not exhibit invasiveness to the intercostal muscle. Histopathological examination and immunohistochemical analysis of both lesions revealed the same findings as the previous tumor; thus, recurrence or dissemination of the SFT was diagnosed.

An SFT is a rare neoplasm that typically develops in the pleural space, but has been reported in various locations. SFTs originating in the mediastinum have rarely been reported. In the present case, the initial tumor was present in the anterior mediastinum; it was traced to the pericardium and found to be encapsulated with intact pleura. SFTs of the pleura are generally slow-growing neoplasms with a favorable prognosis, but some exhibit malignant behavior. Benign pleural SFTs have a high cure rate and an 8% local recurrence rate that is usually amenable to curative re-excision. Malignant pleural SFTs have a 63% recurrence rate even with complete resection (2). However, cases of multiple recurrent SFTs and disseminated SFTs are relatively rare (3,4).

Histopathologically, the most characteristic feature of an SFT is the “patternless pattern” with non-atypical spindle-shaped tumor cells on a collagenous background. The pathological findings are not always predictive of the clinical outcome of SFTs, but the histologic features of malignant SFTs are high cellularity, high mitotic activity, pleomorphism, hemorrhage, and necrosis (5). In the present case, pathological examination did not reveal findings consistent with a malignant SFT.

We performed intraoperative PLC in the second and third surgeries because the lesion site differed from that of the primary lesion. PLC is not generally recommended during SFT resection, and no previous reports on PLC for SFT are available. In cases of primary lung cancer, PLC provides findings to evaluate subclinical pleural dissemination of cancer cells without pleural dissemination or pleural effusion. Kameyama et al. (6) reported that a positive PLC status was an independent factor for a poor prognosis of non-small cell lung cancer in their multivariate analysis. Positive PLC findings may be caused by oncologic characteristics such as lower cancer cell adhesiveness. In this case, the primary tumor arose from the mediastinum, but the recurrent lesion arose from the left upper lung lobe and parietal pleura, distant from the primary site. PLC positivity in second surgery might have suggested subsequent recurrence and dissemination.

Video-assisted thoracoscopic surgery (VATS) has become a useful procedure for the diagnosis and treatment of early-stage lung cancer, metastatic pulmonary tumors, mediastinal tumors, and benign or low-malignant intrathoracic tumors. Port site recurrence (PSR) is a rare complication after the performance of VATS for malignant tumors. Yim (7) reported that the mechanism of PSR was attributed to tumor implantation during the extraction procedure or deposition of cancer cells in the port site with manipulation of surgical instruments. In the last couple of surgery, an extraction bag was applied.

In conclusion, we experienced a case of an SFT with positive PLC findings. PLC for pleural SFTs is not performed as a routine examination; in this case, however, the PLC findings suggested that PLC positivity could be a prognostic factor even in patients who have undergone complete resection. Careful manipulation and the use of an extraction bag and trocar to protect the port site should be considered to prevent cancer cell spillage.