Inflammatory myofibroblastic tumors (IMT) were first reported in 1905 by Birch-Hirschfield (1). IMTs are rare mesenchymal neoplasms of intermediate biologic potential (2). Histologically composed of spindle cells and an infiltrate of inflammatory cells (3) they are typically seen in children and young, non-smoking adults, both sexes are affected equally and there are no significant racial or geographical differences (4). They usually present as a solitary mass often in the lung, retroperitoneum or abdominopelvic region. Most are asymptomatic but when symptoms occur they commonly consist of fever, cough, pain, hemoptysis, or weight loss their clinical behavior ranges from a benign entity to a malignant process with rapid recurrence and metastatic progression (5,6). A variant of IMT known as epithelioid inflammatory myofibroblastic sarcoma (EIMS), as described in our case, displays a malignant behavior with a high potential for recurrence and is associated with a poor prognosis (7,8).

A 71-year-old Caucasian male presented with dyspnea on exertion and a 20-pound weight loss over a 3-month time period. A chest X-ray initially showed a pleural effusion and he underwent thoracentesis during which two liters of serosanguineous fluid was removed. Cytology was non-diagnostic. The patient had return of his symptoms and a chest computed tomography (CT) showed a recurrent effusion (Figure 1) prompting surgical evaluation. With the concern for an underlying neoplastic process, the patient agreed to undergo a diagnostic and therapeutic surgical exploration. 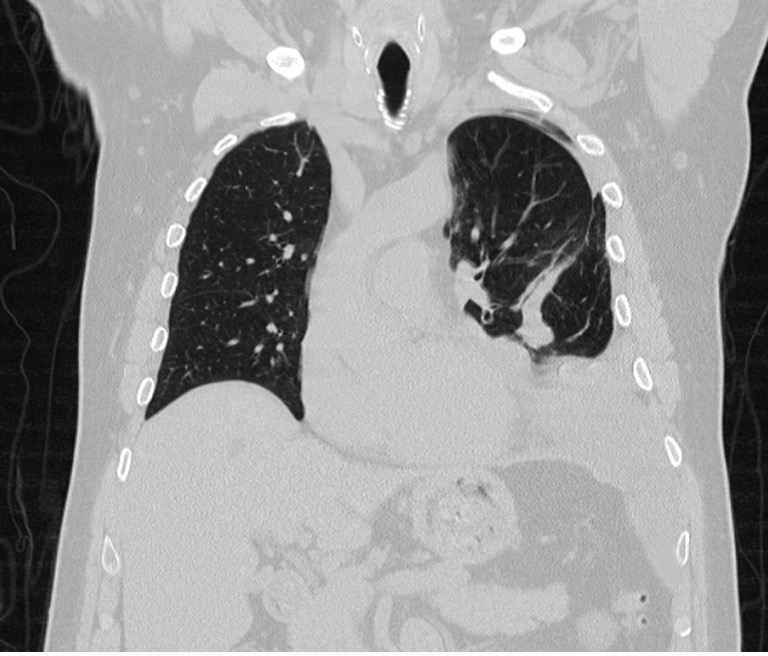 A video-assisted thoracoscopic surgical (VATS) procedure was performed and intraoperative findings included not only a pleural effusion, but a dominant, 12.5 cm × 12 cm × 8 cm, pleural-based mass arising from the lower lobe as well as multiple, 1-4 cm tumor implants throughout the thoracic cavity. The mass as well as many of the tumor implants were removed in an R2 resection. Pathologic examination determined that this was a malignant neoplasm with features consistent with an EIMS (findings discussed below). Molecular analysis revealed an anaplastic lymphoma kinase (ALK) gene rearrangement.

The patient clinically-improved postoperatively, but developed recurrent symptoms within one month. A CT scan showed dramatic progression of disease (Figure 2). After discussion at our multidisciplinary thoracic oncology tumor board, the patient underwent treatment with crizotinib and had a significant clinical response. However, after 2 months, the patient again developed recurrent symptoms. He was switched to a second-line ALK inhibitor with near-complete, radiologic resolution of disease (Figure 3). The patient is nearly 1 year from surgery and remains in clinical remission.

Microscopic features show a hypervascular tumor with myxoid stroma, focal necrosis and cartilaginous differentiation. Signet ring cells were present. Final interpretation was consistent with a malignant epithelioid neoplasm most suggestive of an EIMS. This tumor was found to have a 2p23 ALK gene rearrangement by immunohistochemistry and fluorescence in situ hybridization (FISH).

EIMS may present in different locations but there are common features shared by all described in table (Table 1).

ALK is a tyrosine kinase receptor predominately expressed in the central nervous system (9). Rearrangements involving the ALK locus on chromosome 2p23 have been documented in approximately 36-60% of IMT’s (10). While the correlation between the expression of ALK and the prognosis of IMT remains unknown, several case reports have suggested that IMTs with fusion between ALK and ran-binding protein 2 (RANBP2), usually exhibit a more aggressive clinical course with a recurrence rate of 88% and metastasis rate of 25%. Fewer than 10 cases of IMTs with genetically confirmed RANBP2-ALK fusion protein have been reported to date and only in males and tumors arising from abdominal organs (e.g., the peritoneum, mesentery, and omentum) (2).

The treatment of choice for IMT/EIMS is complete surgical resection when possible. However, recurrence is common after resection (8). Several reports suggest prolonged disease-free survival given that EIMTs frequently contain a rearranged ALK gene. While targeted tyrosine kinase inhibitors have been shown to be effective in certain non-small cell lung cancers and gastrointestinal stromal tumors, their role in EIMTs is still under investigation (8). Our patient with an ALK gene rearrangement has had a dramatic response to ALK targeted therapy, both clinically and now radiologically.

Little is known about the true incidence, natural history, or preferred treatment of this rare entity. The few case reports in the literature have described a combination of surgery and systemic therapy with ALK inhibitors when an ALK mutation is present. The effectiveness of alternative treatment modalities such as radiotherapy, chemotherapy, and steroids is uncertain.