A significant increase in the prevalence of allergic diseases has been an important public health problem in the world (1,2). House dust mites (HDMs) are globally important sources of indoor allergens (3), responsible for the sensitization of more than 50% of allergic patients (4,5). At present, antigen SIT (specific immunotherapy) with HDM extracts is the most efficient treatment for dust mite allergic diseases. However, the crude extracts of HDM not only contain inflammatory molecules, such as ceramides, kallikreins and the ever popular endotoxin, but also include allergens, which have been proved having side effects in the clinical treatment (6). Specific immunotherapy with HDM extracts is an efficient treatment but severe side-effects may occur in the course of treatment. Therefore, recombinant allergens have been regarded as a substitute for crude mite extracts used in clinical immunotherapy which may effectively improve the efficacy and safety of house dust-mites-specific immunotherapy.

A large number of studies have been conducted to understand the structural properties, chemical and biological of dust mite allergens. Two groups of mite allergens (group 1 and 2) have been proven to be the major allergens in dermatophagoides farinae. They are a cysteine protease and an epididymal protein, respectively. More than 80% of humans with HDM allergy have IgE antibody to the group 1 and more than 90% of the group 2Jeny (7-10). However, about 20% of patients do not have IgE antibody to the two group allergens (7). Close to 30 sub-allergens have been recognized and characterized in D. farina (7,11). Heat shock proteins are allergens in Hordeum vulgare, Malassezia globosa and HDM (12-15). Yet, the allergenicity of the heat shock proteins in D. farina has not been defined. Therefore, it is necessary to characterize the D. farinae-derived heat shock protein in the initiation of allergic responses.

In this study, we cloned, expressed and purified the heat shock proteins from HDM, which was nominated as Der f 28 according to the published series of subtypes of HDM allergens. The allergenicity of Der f 28 was tested with a mouse model. The results showed that the r-Der f 28 was capable of inducing allergic asthma in mice.

The sera of patients with allergic disorders were obtained from the First Affiliated Hospital of Guangzhou Medical University. The Sera from non-allergic individuals were used as normal controls. The using human sera in the present study was approved by the Human Ethic Committee at Shenzhen University.

Obtaining the encoding genes of Der f 28 and sequence analysis

Expression and purification of the recombinant Der f 28

The PCR products were ligated into pMD19-T vector (TaKaRa, Dalian, China), the constructed plasmids were transformed into E.coli top10. The positive clones were sequenced by BGI (Shenzhen, China). The pMD19-T vector with Der f 28 product was digested. Der f 28 fragments were recycled from the gel and ligated into the pET44-a expression vector. Initial cloning was performed with E.coli strain Top10. DNA extracted from positive clones was digested with the BamH I and Hind III restriction enzymes and followed by sequencing. The plasmids were transformed into E. coli BL21 cells for expression. The cells were grown in LB-medium supplemented with 50 µg/mL ampicillin to an absorbance of 0.6 at 600 nm. Expression of Der f 28 was induced by adding isopropyl-D-thiogalactopyranoside (IPTG) to LB medium at a final concentration of 0.1 mM and the incubation was continued for 4 h at 37 °C. Cells were harvested by centrifugation and resuspended in 50 mM Tris-HCl, 100 mM NaCl, pH7.5. The cells were sonicated at an amplitude of 38% for 5 min (1 second pulse on and 1 second pulse off) followed by centrifugation at 10,000 rev/min at 4 °C for 20 min. Finally the recombinant protein was purified by affinity chromatography using the Ni+ as a solid phase. After vigorous washing with a washing buffer (50 mM Tris, 40 mM imidazole and 0.5 M NaCl, pH8), the protein was eluted slowly using an elution buffer (50 mM Tris, 0.3 M imidazole and 0.2 M NaCl, pH8). The elution peak was collected and purified by molecular sieve chromatography.

Immunoblotting analysis with sera from allergic patients to dust mites

The r-Der f 28 protein was fractioned by SDS-PAGE (sodium dodecyl sulfate polyacryl-amide gel electrophoresis) and electro-transferred onto a nitrocellulose membrane (Bio-Rad, Hercules, CA, USA). The membrane was blocked for 2 hours with 3% bovine serum albumin (BSA) at room temperature, and then incubated with the sera from patients sensitized to dust mite. After washing three times with TBS-T (Tris-buffered saline containing triton X-100), the membrane was incubated with the secondary antibodies (mouse anti human IgE) for 60 minutes at room temperature. In the end, after washing with TBS-T for three times, the membrane was developed with a DAB kit (Invitrogen, Carlsbad, CA, USA).

Sera IgE antibodies specific to Der f 28 were measured by indirect ELISA. The microtiter plates were coated overnight at 4 °C with at 100 ng/well in Carbonate buffered solution (pH9.5). Then blocked at 37 °C with 200 μL 3% BSA in PBS for 120 min. The serum (diluted to 5 times) or BSA (using as a negative control) was then added to each well (100 μL/well) and incubated for 60 min at room temperature. The plates were then incubated with peroxidase-labeled goat anti-human IgE (1:2,000) for 60 min at 37 °C. Each incubating step was followed by three washes with PBST. The color was developed by adding tetramethylbenzidine (TMB) (100 μL/well) and stopped by the addition of 2M H2SO4 (50 μL/well). The plates were read by an ELx808 absorbance microplate reader (BioTek, Shanghai, China) at 450 nm.

Development of a mouse model of allergic asthma

Eighteen mice were divided into three groups: (I) HDM group; (II) Der f 28 group; (III) PBS group. In HDM group and Der f 28 group, mice were injected with 100 μg extracts from dermatophagoides farinae or r-Der f 28 group with 4 mg aluminum hydroxide as adjuvants, respectively. PBS was used in the control group. The sensitization was performed on day 0, 3 and 7. From day 14, the challenge was performed once a day for a week. HDM and Der f 28 group was challenged with 50 μg crude extract of dermatophagoides farinae or Der f 28 protein, respectively. Following the challenge, Airway hyperresponsiveness to methacholine was measured with the unrestrained whole-body plethysmography (WBP). The mice were subjected to progressively increasing doses of methacholine (0, 6.25, 12.5, 25, 50, 100 mg/mL), and the Penh value was recorded. Bronchoalveolar lavage (BAL) and different cell counts were performed as previously reported (16).

Analysis of IL-4 and specific IgE in serum

Blood samples were collected from the retrobulbar venous plexus of mice by removing eyeball after the last challenge. The serum was isolated by centrifugation at 5,000 rpm for 20 min. The IgE and IL-4 were detected by ELISA with commercial reagent kits according to the manufacturers’ instructions.

The lung tissue was fixed with 4% paraformaldehyde for 24 h. After dehydration, the lung tissue were embedded in paraffin. The tissues were cut into 4 µm thick sections, and then mounted onto glass slides, and stained with hematoxylin and eosin (HE), and observed under light microscope.

All data were expressed as mean ± standard deviation and processed with SPSS statistical software. One-way ANOVA was used for comparison of multiple groups and Student t-test was used to determine the differences between two groups. P value <0.05 was considered significant. 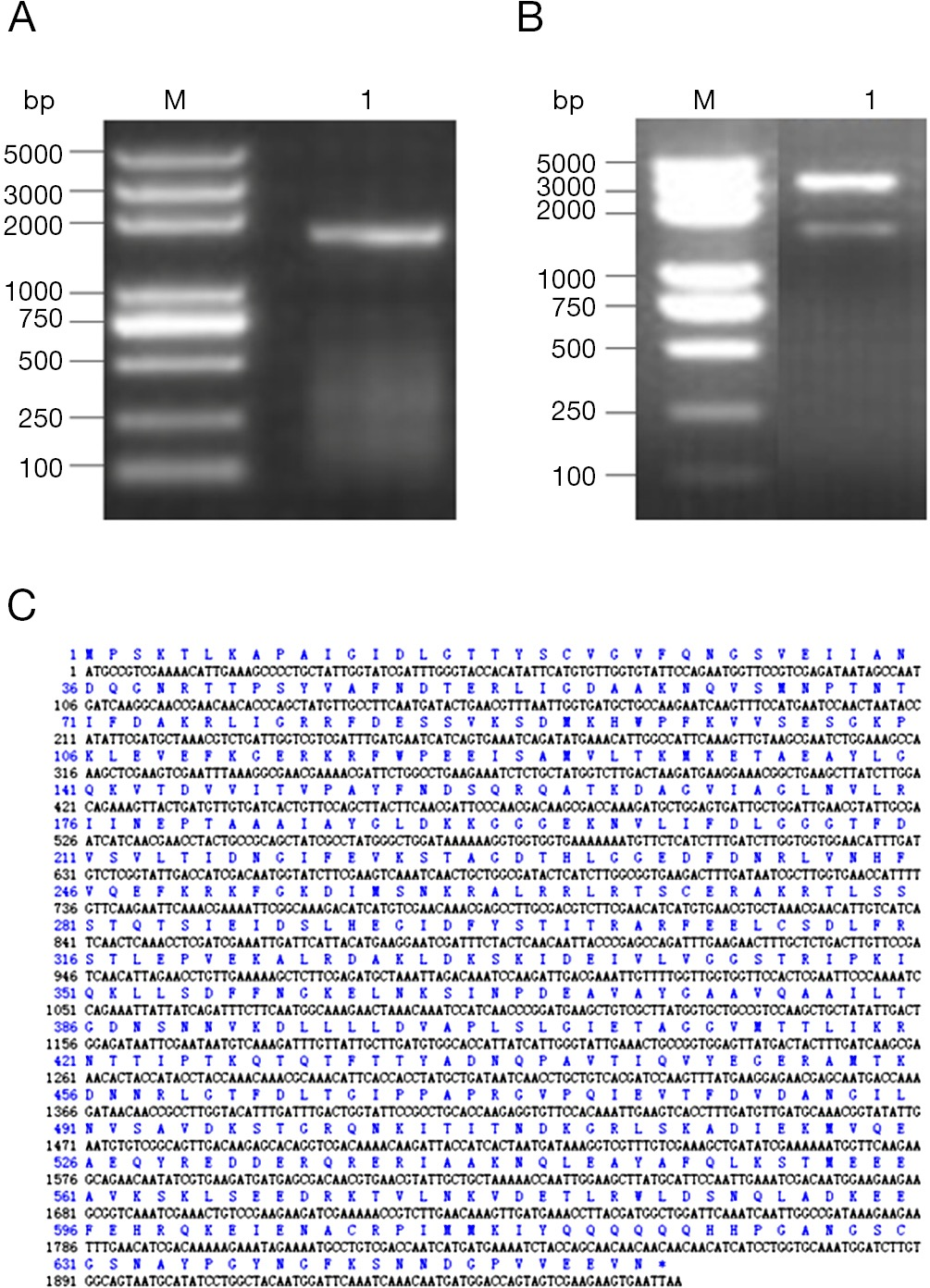 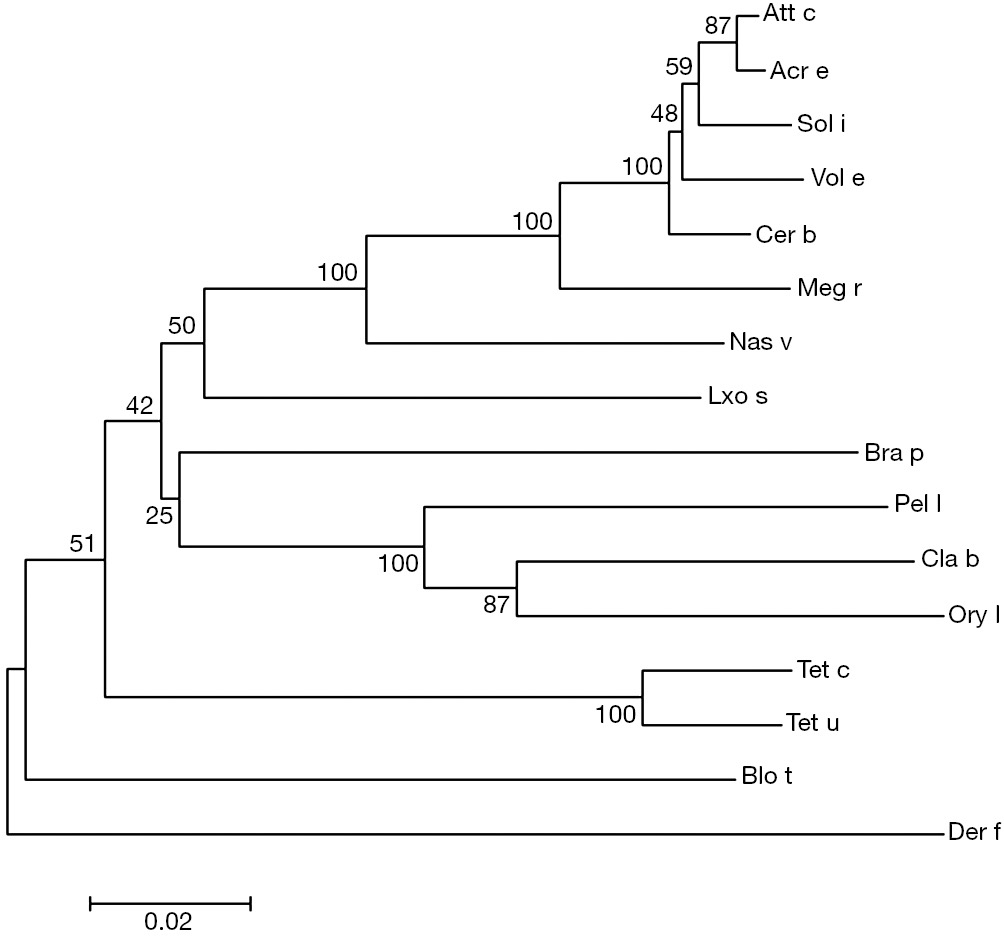 The expression and purification of recombinant Der f 28 protein

In order to obtain r-Der f 28 protein for the subsequent experiments, we cloned Der f 28 cDNA into pET-44a(+), expressed and purified r-Der f 28. After the His-tag Der f 28 were successfully expressed by induction with IPTG (Figure 3A), the high purity of r-Der f 28 was obtained after purification by affinity chromatography and molecular sieve chromatography (Figure 3B,C). 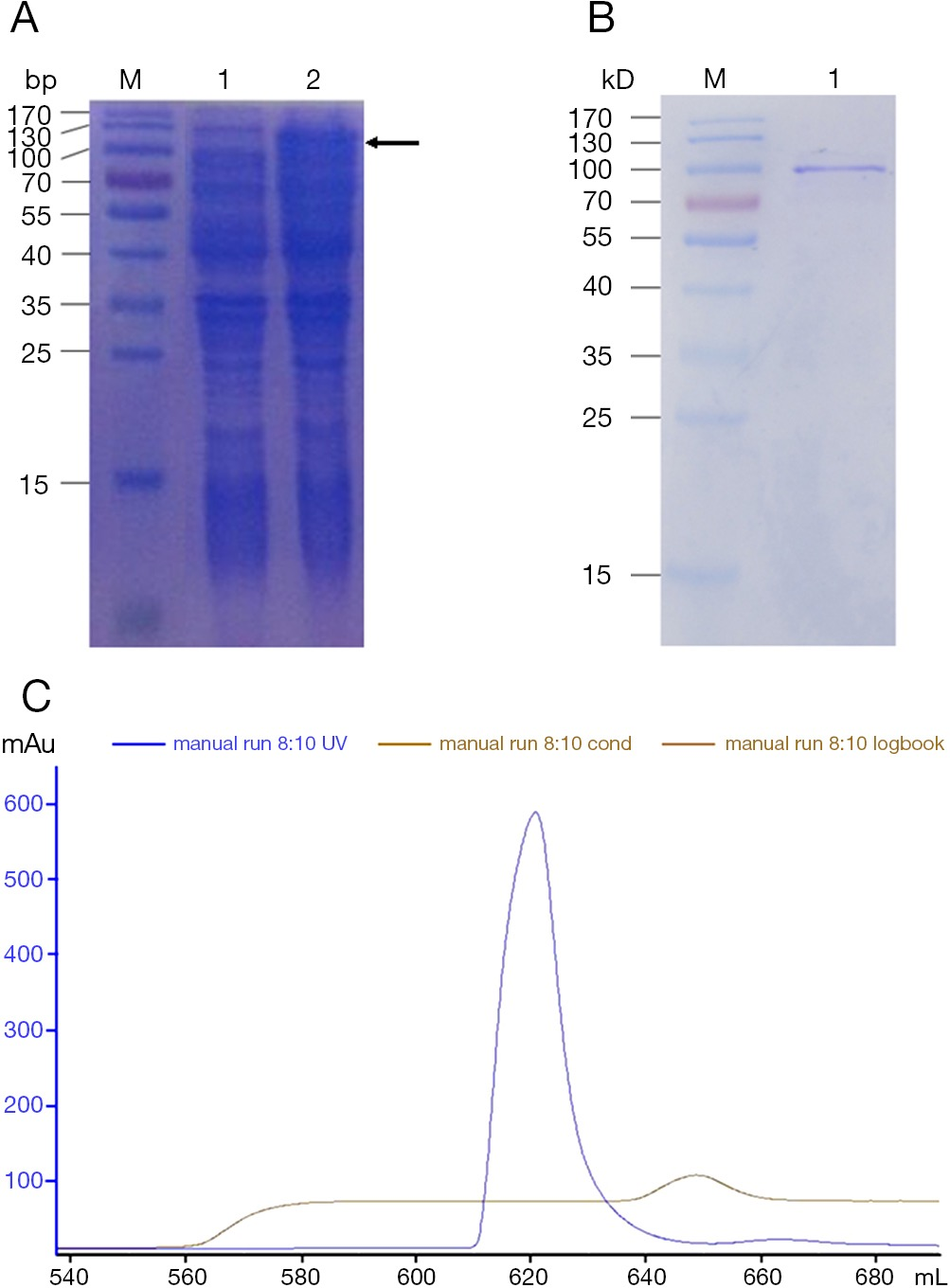 The allergic activity of r-Der f 28 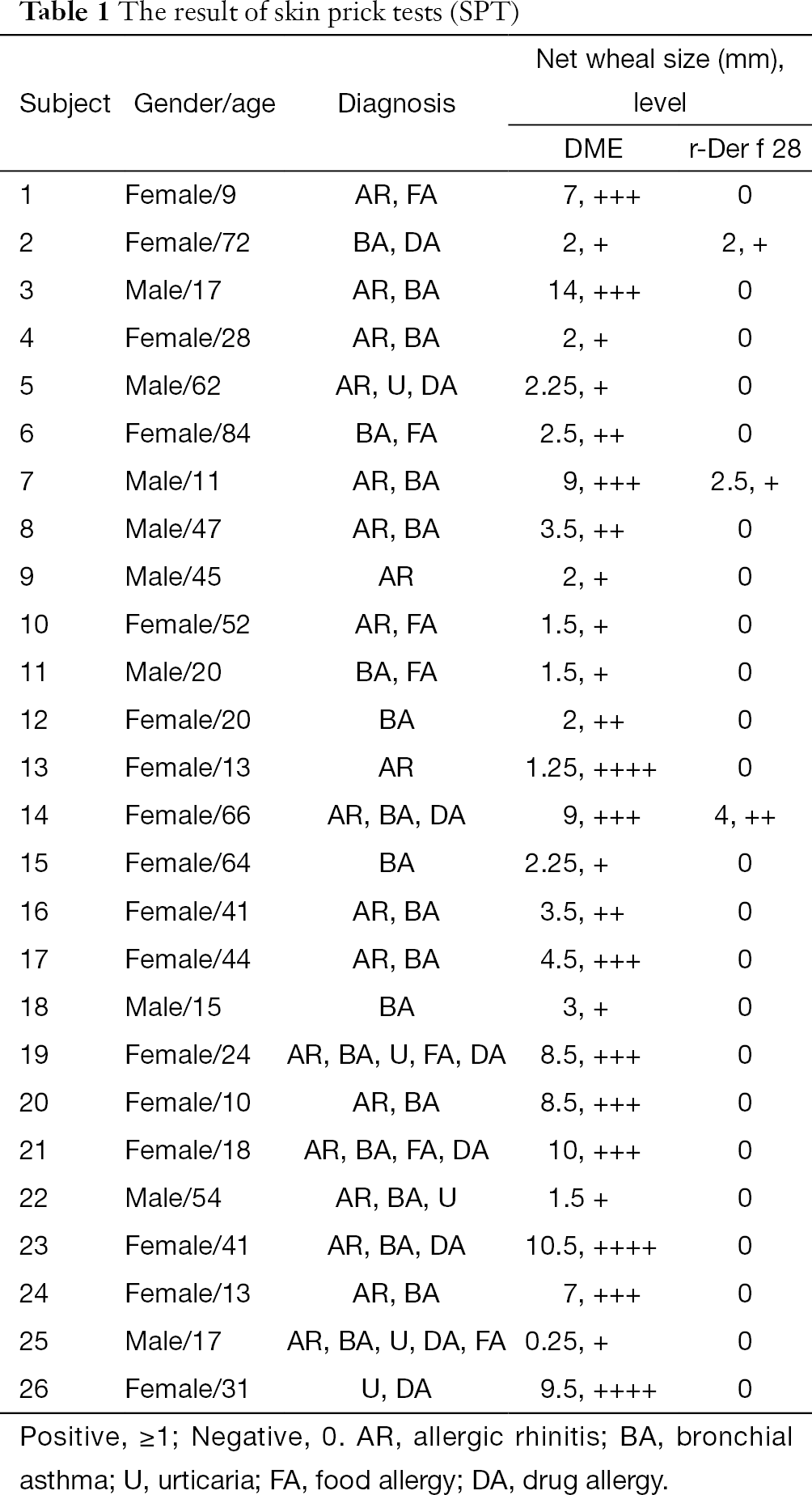 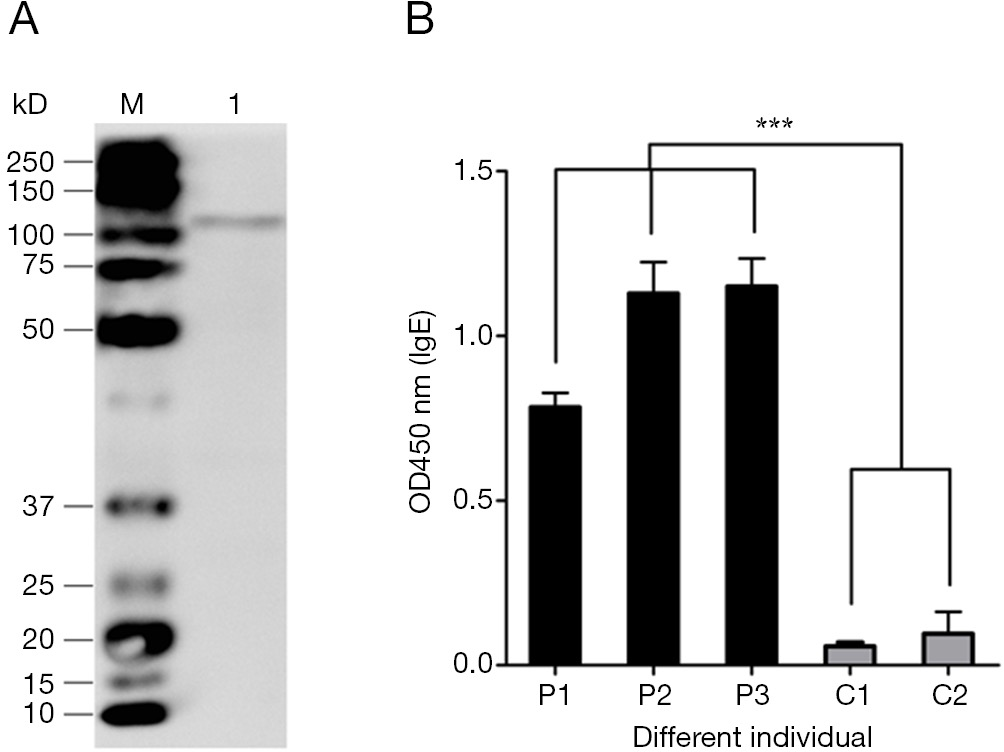 An r-Der f 28-induced mouse model of allergic asthma was developed in our study (Figure 5A). As an important diagnostic index of asthma, airway hyperresponsiveness was assessed by methacholine-induced airflow obstruction using the FinePointe Whole-body Plethysmograph. As shown by Figure 5B, the airway hyperresponsiveness of the mice in the r-Der f 28 group is weaker than that in the HDM group, while the PBS group showed the lowest reaction. As shown by Figure 5C,D, the r-Der f 28 specific IgE and IL-4 were produced by the sensitized mice. Comparing with the normal group, those in the HDM group and the r-Der f 28 (**P<0.01) group were significantly higher than that in the normal group. The total cells and eosinophils in BAL were observed and counted with Wright Giemsa staining under an optical microscope. The proportion of eosinophils in HDM group and r-Der f 28 group was higher than that in control group (Figure 5E). The result was further confirmed by the histopathologic examination. In normal lung tissue, the contour of bronchial tube was clear and there was few inflammatory cell infiltration around the bronchial submucosa. In HDM group and r-Der f 28 group, a plenty of exudate collections in the airway lumen; the structure of the bronchial mucosa was partially damaged and inflammatory cell infiltration was apparent (Figure 5F-H). The results indicate that HDM extract and r-Der f 28 induce allergic pulmonary inflammation. 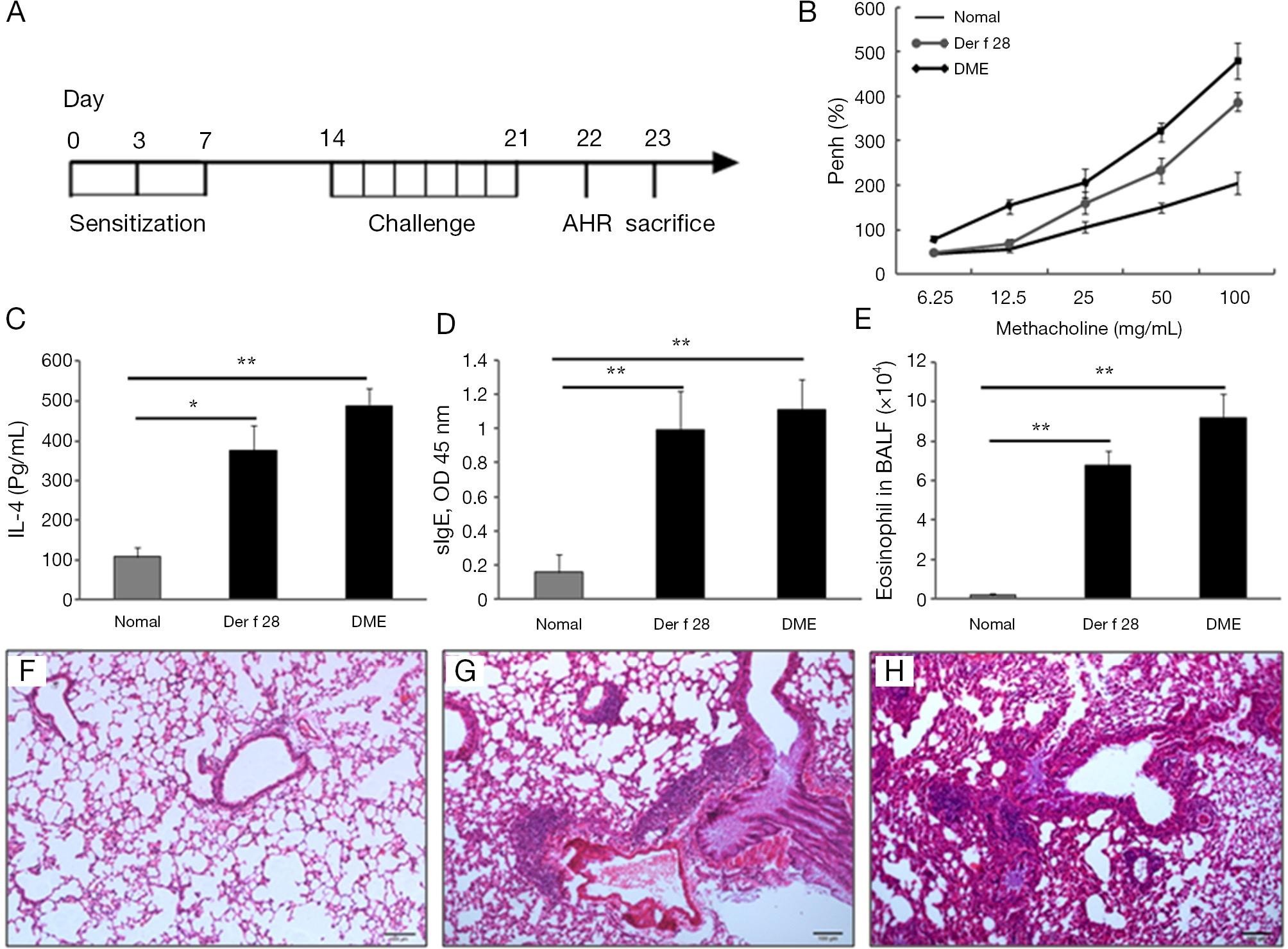 Figure 5 Establishment of mouse model of allergic asthma by induction with r-Der f28. (A) The protocol for mouse model of r-Der f 28-induce allergic asthma; (B) airway hyper-responsiveness were measured using the unrestrained whole-body plethysmography. The Penh values were recorded when the mice were stimulated with the increasing concentration of methacholine after the challenge; (C,D) the level of IL-4 and sIgE in Serum were detected by ELISA; (E) the number of eosinophil cell was counted in the BLAF; (F-H) the pathologic changes of pulmonary tissue (hematoxylin-eosin stain, 100×). F, the PBS group; G, the r-Der f 28 group; H, the DME group; ELISA, enzyme-linked immunosorbent assay.

Application of molecular biology technology to obtain recombinant allergens can provide new insight and new strategies for the development of specific immunotherapy for allergic diseases. Cumulative reports have demonstrated that it is diverse in the allergens of HDM, many mite allergens have not been identified and characterized (17). Heat-shock proteins (HSPs) are the most abundant and soluble intracellular proteins. In cell organisms, invertebrates and vertebrates, they perform a number of housekeeping functions that are essential for cell survival (18). In recent years, a growing number of studies have shown that HSPs play an important role in inflammatory processes of bronchial asthma, and has been reported to be an allergen in Hordeum vulgare, Malassezia globosa and so on (12-15).

In this study, through cloning, expression, and purification of full length recombinant heat shock protein (r-Der f 28), we identified that r-Der f 28 was an allergen in D. Farinae. Using SPT techniques, we proved that Der f 28 is an allergen of D. farinae. Der f 28 reacted to the sera from 11.5% of patients with D. farinae allergy (Table 1). The immunoblotting assays demonstrated that the serum IgE from allergic patients reacted to r-Der f 28 protein. The IgE reactivity of r-Der f 28 in the serum from the r-Der f 28 allergic patients increased by more than 8 folds compared with healthy subjects. Moreover, a well characterized mouse model of allergic airways disease induced by r-Der f 28 was developed successfully. Cytokines secreting by Th2 cells, such as IL-4, play an important role in the lung allergic inflammation (19). This study found that mice exposed to r-Der f 28 showed significantly higher levels of Th2 cytokine IL-4 and specific IgE. We also evaluated the effect of r-Der f 28 on AHR, a hallmark of asthma. Penh values were assessed with whole-body plethysmography 24 h after the last r-Der f 28 challenge. Our result showed that the airway hyperresponsiveness of the mice in the r-Der f 28 group is weaker than that in HDM group, while PBS group showed the lowest reaction. Histological study show r-Der f 28 in asthma group induced extensive infiltration of inflammatory cells such as eosinophils around the alveoli, central bronchi and blood vessels, and marked goblet cell metaplasia and mucin production in epithelial cells.

In summary, the present data provide the evidence that Der f 28 is a new sub-group of HDM allergen, which may be useful for HDM allergy diagnosis and therapy.