Malignant pleural mesothelioma (MPM) is a rare tumor with a poor prognosis, and presents a median survival from diagnosis of less than 7 months for untreated patients undergoing palliative care (1). With cytoreductive purpose, the current protocols are based on a multimodal management, involving perioperative chemotherapy, surgery and radiotherapy (2-5), which, if combined, improve postoperative outcomes and overall survival (6,7). The role of surgery as a forefront approach has been always debated, but a recent analysis reported an improved overall survival (32 vs. 10 months P<0.0001), comparing trimodality treatment including the lung-sparing surgery versus chemotherapy alone, based on a combination of platin and pemetrexed. (8). Since it is not possible to obtain a radical tumour clearance, the goal of surgery is to achieve the macroscopic complete resection (MCR) by reducing the tumour burden (9-11). Even though the optimal surgical strategy is still controversial, the lung-sparing procedures have been recognized as associated with lower postoperative morbidity and mortality (12-14). These benefits are related to the preservation of normal anatomy which improves the survival and allows patients to better cope with further treatments in case of relapse. Two lung-sparing procedures are defined: the pleurectomy/decortication (P/D) is described as the complete removal of the parietal and visceral pleural sheets and could be extended (EP/D) when the resection/reconstruction of diaphragm and pericardium is required. The EP/D has been the most recommended alternative to more invasive procedures and many surgeons are oriented towards the systematic resection of diaphragm and pericardium. The purpose of this report is to assess whether a conservative approach, through P/D, may affect the long-term outcomes such as overall survival (OS) and recurrence-free survival (RFS).

We present the following article in accordance with the STROBE reporting checklist (available at https://dx.doi.org/10.21037/jtd-21-691).

The study was conducted in accordance with the The Declaration of Helsinki (as revised in 2013). The study was approved institutional ethics committee of AULSS3 Serenissima of Venice-Italy (Prot. 0003576 of 11/01/2021) and individual consent for this retrospective analysis was waived. From 2009 to 2019 in the Thoracic Surgery Unit of the hospital of Venice Mestre, 207 consecutive lung-sparing procedures for MPM were performed. For all patients, the diagnosis was histologically proven after videothoracoscopic pleural biopsies and pleurodesis. Among these patients, 28 with biphasic histotype diagnosed after surgery, were excluded from the present analysis and 24 patients were lost in the follow-up. Data from 155 patients were retrospectively reviewed. The mean age was 64.3 years with a median of 66 years. The baseline characteristics (Table 1) confirmed occupational or environmental exposure to asbestos (85.2%) and predominance of the male gender (77.4%). Preoperative work-up included thoracic and abdominal CT scan with contrast and FDG-PET scan. In a few cases, infiltration of the thoracic wall and the diaphragm was evaluated by MRI. Operability criteria were determined by performance status, cardiopulmonary function, and clinical staging. The multimodal treatment was applied through induction chemotherapy in 101 patients (65.2%) and by adjuvant chemotherapy in 54 patients (34.8%). The recommendations proposed by the Third Italian Consensus Conference for MPM have been adopted (15) in our center since 2015. In all cases, chemotherapy was based on 3 to 6 cycles of pemetrexed + platinum-derived drugs regimens. After induction chemotherapy, the response to treatment was always evaluated by a FDG-PET scan, in accordance with the modified RECIST guidelines (16). The surgical patients were selected by performance status (ECOG 0-1), by age (<80 years) and by clinical TNM factors, following the eighth edition of TNM staging, according to the following FDG-PET results: from cT1 to cT3, no nodes or ipsilateral nodes and absence of distant metastases.

Baseline characteristics of the population

All of 155 patients underwent lung-sparing surgery. The surgical access was performed through a vertical thoracotomy, including the incision of the previous videothoracoscopy. Pleural thickening after the talc pleurodesis allowed the extrapleural dissection from the apex to the costophrenic angles. Through a blunt dissection on the extrapleural plane, the endothoracic fascia is separated from the parietal pleura. When mediastinal surface is explored,he phrenic nerve is entirely isolated and secured. The decision to carry out a pleurectomy or an extended pleurectomy is taken when the pericardium and the diaphragm are approached. The pleural layer is cleaved to be easily peeled off from the underlying structures. If infiltration was present and the detachment was hindered, a full thickness resection was performed. When the infiltration was doubtful and the diaphragmatic and/or pericardial involvement was focal, a frozen section was required. Depending on the surgeon choice, the amount of tissue to remove was related to the frozen sample results and in case of partial resection, the direct closure was the preferred option. Pericardial effusion was investigated with specimen for cytology. On the diaphragm, the total detachment of the pleura, saving as much muscle as possible, was always attempted. When a full-thickness involvement of the diaphragm imposed the resection and the prosthetic reconstruction, specimen from peritoneum was harvested for frozen section analysis. The decortication of the visceral pleura was performed with completely deflated lung. The detachment from parenchyma is carried out through a blunt dissection with cotton balls or fingers, following all reflections of the pleura, notably in the fissure and around pulmonary vessels at hilum. Depending on surgeon’s choice, Argon beam coagulation was applied on small residues of normal pleura and to control the bleeding. Lymphadenectomy was always accomplished, exploring the hilar and mediastinal stations. The lymph nodes from paravertebral, internal mammary, diaphragmatic chains were accurately harvested, when present. A postoperative intensive care admission was scheduled for all patients. According to the IASLC/IMIG recommendations (17), EP/D was defined for procedures involving large resections requiring a prosthetic reconstruction of pericardium or diaphragm or both. P/D, defined by the preservation of pericardium and diaphragm, included the cases in which a direct suture was needed for accidental tears or small tears without infiltration at frozen section. For all procedures the goal was to achieve the MCR. Whenever the complete tumor removal was not possible, due to the intraoperative finding of mediastinal and/or chest wall infiltration, subtotal pleurectomy was labelled as R2 and staged IIIB. All histopathologic reports were reviewed according to the eighth edition of TNM staging system (18-20).

Data were retrospectively collected from the clinical records. Following data were reviewed for the statistical analysis: gender, type of surgery, TNM descriptors, pathological staging, recurrence and survival. Starting from the date of surgery, the long-term outcomes and the prognostic factors were evaluated in terms of OS and RFS. Descriptive statistics were used for exploratory data analysis. The difference in OS and RFS curves were estimated with the Kaplan-Meier method. Median survival times with 95% confidence intervals (CIs) and a log-rank test were conducted to determine the variation in the survival distribution for the different variables. Cox proportional hazard regression models were adopted to establish hazard ratios. Tests of Model Coefficients were run to evaluate the adequacy of variables to explain the events. Both OS and RFS multivariate analysis were performed with adjustment for Type of surgery, R2 surgery, pN. All P values were based on a 2-sided hypothesis, and those <0.05 were considered statistically significant. Statistical analysis was performed with IBM SPSS Statistics, Version 25.0. Armonk, NY: IBM Corp.

A total of 68 P/D (43.87%) and 87 EP/D (56.12%) were performed. Air leaks >7 days were the most frequent postoperative complication (54.8%) and hemotransfusion for Hb <9 g/dL was needed for 50 patients (32.3%). Cardiovascular events, including cardiac arrhythmia, ischemic attack and pulmonary embolism, occurred in 11 patients (7.1%). Other complications as chylothorax, bowel obstruction and perforation were recorded for 5 patients (3.2%). Sepsis and hemothorax requiring surgery, occurred in 8 cases (5.2%). Complication rate was similar in the two groups of surgery. In one patient a cardiac tamponade related to a direct suture on the pericardium, was recorded after P/D (Table 2). Thirty- and ninety-day postoperative mortality was 0.64% and 3.2% respectively. All patients were followed up by a CT scan every 4–6 months and, in case of suspected recurrence, by FDG-PET scan. Adjuvant therapy was administered to those who did not receive induction treatment. In case of recurrence, a second-line chemotherapy was discussed in the multidisciplinary team and, for limited or localized relapse, intensity-modulated radiotherapy or redo-surgery were considered. Pathological staging was as follows: stage IA: 32 (20.6%), IB: 67 (43.2%), II: 12 (7.7%), IIIA: 23 (14.8%), IIIB: 21 (13.5%). The different stages were equally represented for each type of surgery and the patients distribution was balanced in the two groups (chi-square test P=0.189). The IIIB stage included locally advanced and technically unresectable tumors in which the MCR was not obtained. The R2 cytoreduction was performed as a combined result of the following intraoperative findings: multifocal infiltration of the chest (n=5); adhesion/infiltration of mediastinal structures such as aorta, esophagus, superior cava vein, spine (n=13); invasion of the peritoneum (n=3), invasion of the thoracic inlet (n=2); transmural infiltration of the pericardium with positive cytology in pericardial effusion (n=7). Patients R2 with incomplete tumour resection were 8 (11.76%) in P/D and 13 in EP/D (14.94%), showing an equal distribution between groups (P=0.64 by chi-square test). 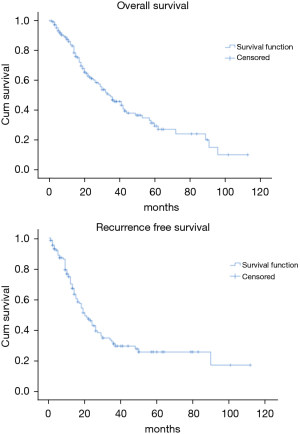 Univariate analysis for OS and RFS 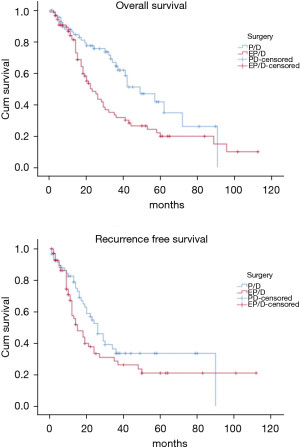 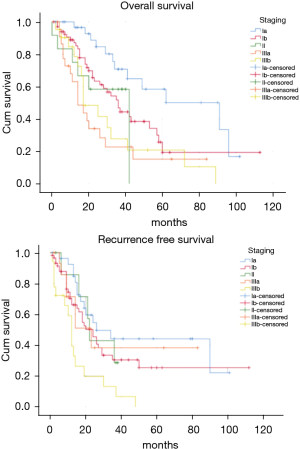 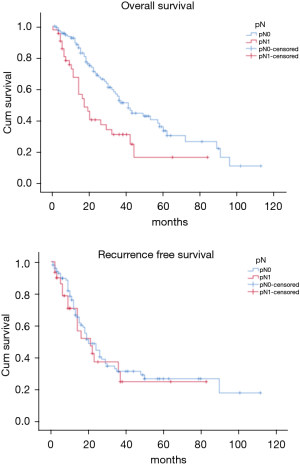 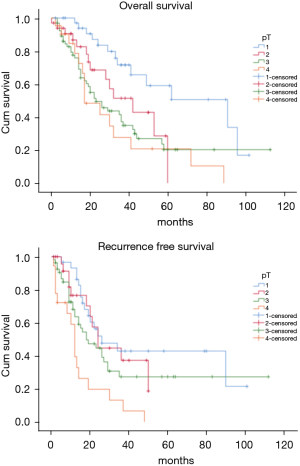 Multivariate analysis for OS and RFS

This study was designed as a retrospective analysis conducted over 10 years in a single high-volume center for the treatment of MPM. This might be a source of bias for the changes that occurred over the years in treatment strategy, in TNM grouping and in guidelines recommendations. A possible risk of bias might derive from the pathological staging which is defined by the surgeons during pleurectomy.

A cohort of patients with epithelial MPM undergoing lung-sparing surgery was analyzed. Benefits for survival were observed when diaphragm and pericardium were preserved. TNM variables were evaluated according with the eighth edition of the TNM staging system. Whether the N factor is determinant for OS, it appeared to be less involved in the development of initial relapse. The recurrence-free survival seemed to be not affected by the type of surgery. These data need to be sustained by further studies, to confirm if the systematic substitution of the diaphragm and pericardium might be avoided, in case of absence of tumor infiltration.

Funding: All authors are grateful to Redax® S.p.A. for funding the article processing charges.

Reporting Checklist: The authors have completed the STROBE reporting checklist. Available at :...--

Conflicts of Interest: All authors have completed the ICMJE uniform disclosure form (available at :...--). All authors report funding from Redax S.p.A. for the article processing charges.

Ethical Statement: The authors are accountable for all aspects of the work in ensuring that questions related to the accuracy or integrity of any part of the work are appropriately investigated and resolved. The study was conducted in accordance with the Declaration of Helsinki (as revised in 2013) The study was approved by institutional ethics committee of AULSS3 Serenissima of Venice-Italy (Prot. 0003576 of 11/01/2021) and individual consent for this retrospective analysis was waived.