History of pneumonia is a strong risk factor for chronic obstructive pulmonary disease (COPD) exacerbation in South Korea: the Epidemiologic review and Prospective Observation of COPD and Health in Korea (EPOCH) study

About 65 million people around the world find it distressingly difficult to breathe due to chronic obstructive pulmonary disease (COPD) (1). COPD is a major cause of morbidity and mortality worldwide (2) and is one of the ten leading causes of death in South Korea. The epidemiologic study carried out by the South Korean National Health and Nutritional Examination Survey (KNHANES) in 2008 showed that COPD prevalence in the population over the age of 40 was 19.4% among men and 7.9% among women, respectively (3).

COPD is characterized by persistent airflow limitation. As the disease progresses, there are a greater dependence on health care utilization, more frequent hospital admissions and higher costs (4). Also, several studies have indicated that exacerbations ought to be considered when examining the progression of COPD (5,6), since exacerbation data can be used to predict disease progression.

Patients eligible for this study were over 40 years of age and were diagnosed with COPD as defined by the GOLD criteria at least 1 year prior to enrollment, and had been assessed at the investigational site for at least 1 year. The exclusion criteria excluded patients who were currently involved in any other interventional studies and those diagnosed with cancer. All patients submitted their written informed consent. The study was approved by Institutional Review Board (IRB) and conducted in accordance with the Declaration of Helsinki and Good Clinical Practice guidelines. This paper represents the results of our study covering a 24-month retrospective and prospective analysis.

Data was collected on the COPD exacerbation events from a period of 1 year preceding the enrollment date and 1 more year following the enrollment and was also collected on the results of pulmonary function tests over the 2 years. Our analyses also included other data such as demographic information, medical history, COPD phenotype, COPD Assessment Test (CAT) score (11), comorbidity and COPD medication at enrollment.

The pulmonary function test and medical history were investigated together to verify the correlation between the exacerbation rate and the physical condition of the patients. ‘Moderate exacerbation’ was defined as an event requiring treatment with a systemic corticosteroid and/or antibiotics, ‘severe exacerbation’ was an event requiring hospitalization, and ‘other exacerbation’ included visits to primary-care physicians or a change in the use of regular medication (12). In addition, CAT was performed at visit 2 to assess COPD status. The detail procedures followed in this study are presented in Figure 1. Descriptive data are reported in terms of mean ± standard deviations (SD) or the number of patients (percentages), as appropriate. For comparisons of patients’ characteristics, analysis of variance (ANOVA) (Kruskal-Wallis test, when appropriate) was used for continuous variables and Chi-square tests (Fisher’s exact test, when appropriate) were used for the categorical variables between patient groups by GOLD spirometry classification. The change of disposition for COPD exacerbations during the 2 years was carried out by Bowker’s test. Logistic regression was used to examine parameters potentially associated with COPD exacerbation occurrence. All variables in the multivariate regression model were considered as univariate logistic regression models for demographics or clinically meaningful variables such as forced expiratory volumes in 1 second (FEV1), CAT, body mass index (BMI), and phenotypes. The difference of dispositions between the enrollment and the prospective based on the GOLD revised 2011 were assessed by Bowker’s test. P values less than 0.05 were considered significant. No adjustments for multiple comparisons were made. All analyses were conducted using SAS software, version 9.2 [SAS® 9.2 (SAS Institute Inc., Cary, NC, USA) software]. 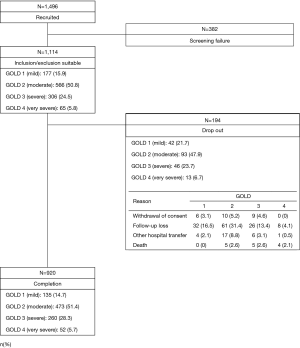 Table 1 presents the demographic information and characteristics of the 1,114 subjects who participated in the study. Approximately 90% of the subjects were male, and the majority of the subjects were aged 60 or older and less than 80. The total CAT scores were found to be statistically different between the groups, as 13.4±7.3 in GOLD 1, 15.2±7.7 in GOLD 2, 19.5±8.1 in GOLD 3, and 25.2±7.4 in GOLD 4, indicating that the score increased as the pulmonary function worsened (P<0.001).There was no tendency for comorbidity to be correlated to a change in the spirometry classification. The majority of the subjects used a long acting muscarinic antagonist (LAMA) or a combination of inhaled corticosteroid (ICS) and long acting beta agonist (LABA). Also, a short acting beta 2 agonist (SABA) was administered pro re nata (PRN) in all subjects. As regards the frequency of use, LAMA was used on 106 subjects (59.9%) in GOLD 1, 444 subjects (78.4%) in GOLD 2, 264 subjects (86.3%) in GOLD 3, and 60 subjects (92.3%) in GOLD 4, which was more frequent than the use of other medications. 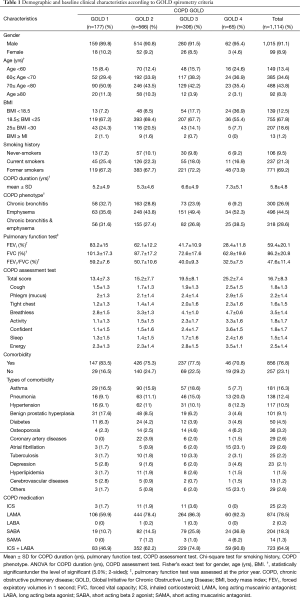 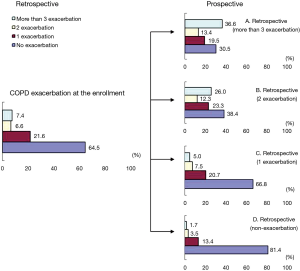 Classification according to the revised GOLD diagnostic criteria

When patients were grouped based on GOLD spirometry classifications, the exacerbation rate increased with disease severity, as has been demonstrated in Evaluation of COPD Longitudinally to Identify Predictive Surrogate Endpoints (ECLIPSE) study (15).

The exacerbation rate was 18.09 times greater among patients who had experienced pneumonia in the retrospective analysis than among those who did not have pneumonia. This indicated that among COPD patients, history of pneumonia is an important predictor of the risk of COPD exacerbation. In the UK National COPD Resources and Outcomes Project of 2008, COPD exacerbations were associated with worse outcomes among patients with a history of pneumonia. In patient mortality was 11% and 7% and 90-day mortality was 17% and 13% for pneumonia and non-pneumonia patients, respectively (P<0.001) (16). In addition, the exacerbation rate was 1.79 times greater among cases in which the total CAT score was 10 or higher in the retrospective analysis than among those in which the score was less than 10. This suggested that a total CAT score of 10 or higher is associated with COPD exacerbations.

The distribution of subjects has been reclassified according to the new 2011 GOLD criteria, which additionally includes CAT scores and frequency of exacerbation. As time progressed from enrollment to the prospective results, 156 subjects (17.0%) became more symptomatic and/or high risk, but 137 subjects (15.0%) became less symptomatic and/or low risk. A further study will be required to investigate this difference.

The strengths of this study are that it included a large sample size, used relatively broad inclusion criteria and the used observational data which better reflected the actual current epidemiological situation in South Korea. Even though this non-interventional study succeeded in generating a large body of data, there were limitations inherent in the study design, in regards to potential bias, the study’s effects and the lack of a control group. Nevertheless, our results suggested that the possibility of exacerbation occurrence was higher among COPD patients who had history of pneumonia, a high CAT score and two or more exacerbations than among subjects who did not have these features. It must be acknowledged, however, that these findings will need to be established more clearly by an extended study capable of confirming the effect of the frequency, management and treatment of pneumonia on COPD exacerbation occurrence. 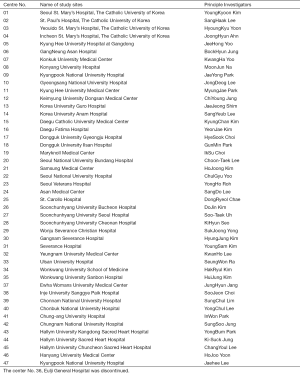