Although the long-term outcome of mechanical value replacement have improved significantly with the progress of materials, design, manufacturing and surgical techniques, prosthetic valve dysfunction remains a very serious complication after mechanical valve replacement with high mortality and morbidity (1). Numerous studies have been carried out to identify the risk factors for prosthetic valve dysfunction (2-13). An algorithm for management of obstructive thrombosed prosthetic heart valve has been developed recently (4).

Between October 1996 and June 2011, a total of 16,893 cases of mechanical heart valve replacement were performed in our institute. Among these there were 48 (0.28%) cases of reoperations for mechanical heart valve dysfunction. In this retrospective study, we seek to report our experience with surgical management of this group of patients with emphasis on etiology, surgical strategy and early outcomes.

The Ethics Committee of Fu Wai Hospital and Cardiovascular Institute approved this retrospective study and waived the need for individual patient consent for this study. 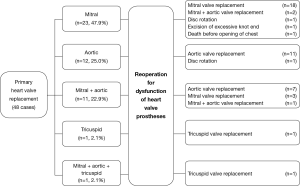 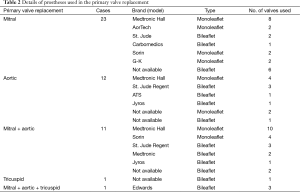 The clinical presentation varied considerably from dyspnea and palpitation with changes in valve clicks on auscultation to sudden onset of ventricular fibrillation immediately following the primary valve replacement. Electrocardiogram was abnormal in 37 cases (77.1%), including atrial fibrillation in 23 (47.9%), ventricular hypertrophy in 10 (20.8%) and ventricular premature beat in 4 (8.3%). Chest roentgenograph showed a cardiothoracic ratio >0.55 in 17 patients (35.4%). Echocardiography showed that the free mobility of the prosthetic disc or leaflet was interfered, which resulted in obstruction or regurgitation of the prosthetic valve. The preoperative New York Heart Association (NYHA) functional class was II in 17 patients (35.4%), III in 18 (37.5%) and IV in 13 (27.1%) (Table 1).

The reoperation was done under moderate hypothermic cardiopulmonary bypass with cold potassium cardioplegia. There were 21 (43.8%) emergency and 27 (65.2%) elective operations. In 46 patients, the operation was performed via a repeat median sternotomy with cannulation of the ascending aorta and vena cava or right atrium. Left thoracotomy and femoral artery cannulation was used in one patient who sustained cardiac arrest after induction of general anesthesia.

The causes for mechanical valve dysfunction were thrombosis in 19 patients (39.6%), pannus formation in 12 (25.0%), pannus formation with thrombosis in 11 (22.9%), improper disc orientation in 2 (4.1%), missing leaflet in 1 (2.1%), excessively long knot end in 1 (2.1%), endogenous factor in 1 (2.1%) and unidentifiable in 1 (2.1%). In one patient who had an aortic valve replacement 10 years ago and suffered from dyspnea for 2 months, one leaflet of the previously implanted bileaflet prosthesis was found to be missing during reoperation.

Seven patients expired (14.6%, 7/48), six of whom (85.7%) died after an emergency reoperation. The mortality rate was significantly higher in emergency (28.6%, 6/21) than in elective patients (3.7%, 1/27; P=0.03). The cause of death was low cardiac output in three cases (6.3%), multi-organ failure in two (4.2%) and intractable ventricular fibrillation in two (4.2%). One female patient expired intraoperatively due to refractory ventricular fibrillation before opening of the chest and the etiology was not identified. Extracorporeal membrane oxygenation was used in one patient who could not wean from cardiopulmonary bypass but failed to save his life.

The clinical presentation varied from no symptoms to acute heart failure even sudden cardiac arrest. On auscultation, valve clicks may be diminished or absent with additional systolic or diastolic murmurs. Detection of the “double click” may be useful for early diagnosis of dysfunction of bileaflet prostheses. Although transthoracic echocardiography (TTE) is the most commonly utilized imaging modality (4), it is less sensitive in detecting the reduced prosthetic disc/leaflet motion than cinefluoroscopy. Transesophageal echocardiography (TEE) (14,16) especially 3-dimensional TEE (17) may be the best diagnostic tool, which can define the causes better and helps in guiding therapy, risk stratification and monitoring follow-up outcomes (18). In cases when it is difficult to differentiate pannus from thrombosis (14,19), Doppler study can help in the diagnosis by measuring hemodynamic parameters (8). Besides, multidetector-row computed tomography can identify causes of prosthetic valve dysfunction that constitute surgical indications but are missed at echocardiography or fluoroscopy (20). In this series, the diagnosis was confirmed by Doppler echocardiography in all patients.

Mechanical valve dysfunction can be classified as endogenous and exogenous according to the etiology. Endogenous dysfunctions are caused by valve damage or defect, which has become extremely rare with the improvement of design, materials, manufacture and detection methods in vitro (21). Exogenous causes include inappropriate selection of prosthesis, technical issues or other complications, such as thrombosis, excessive pannus overgrowth into the prosthetic rim, excessively long knot end, residual chordae tendineae stuck in the prosthetic sewing ring, extremely long residual papillary muscles in left ventricle or calcified tissues under the prosthesis hampering leaflet mobility. The most common causes of mechanical valve dysfunction are thrombosis and pannus formation, which was present in 87.5% of patients in this series.

Thrombosis is usually due to inadequate anticoagulation (22) and associated with atrial fibrillation (9) and low cardiac function. However, Maribas et al. reported that valve thrombosis occurs with similar frequency in patients with bioprosthetic valves and in those with mechanical valves who are receiving adequate anticoagulant therapy (23). In this series, thrombosis was seen in 62.5% (30/48) of patients; among them 16 (33.3%) developed atrial fibrillation and 21 (43.7%) were in NYHA functional class III or IV preoperatively. This high incidence of thrombosis highlights the need for adequate anticoagulation and regular follow-up after initial prosthetic valve replacement. Owing to the low pressure of the right heart, the incidence of tricuspid valve dysfunction (almost all caused by thrombosis) is as high as 20% (11). In this series, there were two cases (4.2%) of tricuspid valve dysfunction caused by thrombosis; at reoperation tissue valves were chosen to reduce the risk of recurrent thrombosis.

Pannus formation was found in 47.9% of patients in this series, including 11 (22.9%) with concomitant thrombosis. A study of 87 cases with mitral valve obstruction has found that pannus formation is more frequent than thrombus formation, but thrombosis is of earlier onset than pannus formation (13). Pannus is an overgrowth of fibrous tissue invading the valve orifice and may result from an non-immune inflammatory reaction (13), which is evidenced by elevated levels of plasma transforming growth factor beta 1 (24), protein C and protein S (25). Histologically the pannus tissue incorporates collagen and elastic tissues containing endothelial cells, chronic inflammatory cells and proliferation of myofibroblasts (26). Several studies reported that pannus formation causing prosthetic aortic valve stenosis occurred mainly in female patients with a small body surface area (12,14,24,27). This is corroborated by the 70.8% of female patients in our series. Pannus formation has been identified as the second cause of reoperation for mechanical valve (9). Although mitral valve replacement with partial or complete chordal sparing offers the advantage of preserving left ventricular geometry and function, the unresected mitral valve leaflets may exacerbate the host tissue response to the prosthesis and increase the risk of thrombus and/or pannus formation (28). In our practice, we routinely excise the mitral valve about 2.5 mm from the annulus and trim the residual edge neatly.

For patients with mechanical valve dysfunction, surgical decision-making should be based on the cause of valve dysfunction. For endogenous causes, the only effective option is a redo valve replacement. One patient in this series developed acute valve dysfunction after aortic valve replacement, and TEE showed moderate regurgitation. Immediate inspection ruled out thrombosis, excessive knot end or residual papillary muscles and other exogenous factors. Cardiac activity was not restored after the valve orientation was adjusted twice. Decision was made to use another mechanical valve, which restored cardiac activity and achieved stable hemodynamics. This case suggested that the dysfunction might result from endogenous factors, such as intrinsic defect of the valve. Exogenous factors, such as excessively long knot end or residual chordae tendineae, should be avoided in the initial procedure. To prevent small chordae tendineae from interfering with the free mobility of the prosthetic disc or leaflet, normal saline can be injected to fill the ventricular cavity repeatedly to float the slender chordae and to guarantee complete resection. After the knots are tied, the mobility of discs and length of knot ends should be checked routinely. In three patients of this series with improper disc orientation and excessive knot end, prosthetic valve dysfunction was successfully treated with disc rotation and excision of the excessive knot end. Our experience shows that redo valve replacement may not be necessary in cases with certain exogenous causes, such as improper disc orientation or excessive knot end.

For patients with thrombosis, controversy exists regarding the optimal management. Some believe it is enough to debride the thrombosis instead of prosthetic valve replacement owing to the relatively short surgical duration (5,29), and debridement may have lower risk and mortality than valve replacement. Albeit there are reports that valve function could be normal after debridement, it should be noted that the thrombus usually adheres firmly to the prosthetic valve disc, which makes complete removal difficult (3,9). Any slight damage of the disc surface is likely to cause the recurrence of thrombosis. Although the rate of recurrent thrombosis following clot removal and debridement has been shown to be higher than after valve replacement, the difference in recurrent thrombosis between redo valve replacement and clot debridement was not statistically significant (7,30). Therefore, thrombus removal might be considered in patients with high surgical risks. Deviri and associates argue that the decision to replace or debride the valve should be left to the surgeon, based on anatomic and technical factors at the time of surgery (2). In addition, pannus formation is the result of an exuberant healing process in response to a foreign body and takes longer time to become clinically manifest, often in combination with thrombosis. Because the fibrotic overgrowth generally occurs on both the prosthetic and natural valve surfaces, prosthetic valve replacement is preferred to debridement in patients with pannus (13). Nevertheless, some believe that redo valve replacement might be advisable only in patients with extensive, circumferential pannus (12,27). On the other hand, more recent studies have shown that thrombolysis can restore adequate function of the thrombosed prosthetic valve with high success rate and lower mortality and morbidity rates (22,31,32). In literature, thrombolysis has achieved a success rate of 64–89%; the incidence rate was 5–19% for systemic embolism and 5–8% for major bleeding. But the incidence rate of recurrence was as high as 15–31% with a mortality of 6–12.5% (4,33-37). Based on this, thrombolysis is recommended as the first-line treatment for all patients with left-sided prosthetic valve thrombosis in the Society for Heart Valve Disease guidelines and for patients with low thrombus burden (<0.8 cm2) regardless of NYHA functional class in the American College of Chest Physicians guidelines (35). It is believed that thrombolysis has a higher chance of success if the thrombus is younger than 14 days (22,33).

No matter what treatment would be taken, the mortality rate of prosthetic dysfunction was significantly higher than the primary valvular disease. It was reported that the overall operative mortality was 10.8–15% and 20–40% in emergency operations (2,5,23,38) and as high as 62.5% in early series (39). In this series the overall mortality was 15.2% and 6 of 7 (85.7%) deaths occurred after emergency reoperation. The high mortality of 28.6% in emergency patients may be due to the poor general conditions, worsened cardiac function and lack of sufficient preoperative preparation. While emergency reoperation may be the only life-saving therapy for emergency cases, prompt and sufficient preoperative preparations should be made for patients with chronic prosthetic dysfunction to improve their general conditions and cardiac function, so as to achieve better surgical outcomes.

The retrospective study has several limitations, such as the relatively small number of patients and the lack of late follow-up after the reoperation. Specifically, information was not available about the surgical techniques and valve prostheses used in initial valve replacement. Details of anticoagulation management after the initial procedure were also missing, such as the target international normalized ratio (INR), frequency of INR measurements and especially the INR values prior to the occurrence of valve dysfunction.

The results of this study show that thrombus and pannus are two major causes for dysfunction of mechanical valve prosthesis and surgical management is associated with significant mortality and morbidity. Earlier identification and prompt reoperation are vital to achieving better clinical outcomes. The high incidence of thrombosis in this series highlights the need for adequate anticoagulation and regular follow-up after initial mechanical valve replacement. Further study is warranted to determine the long-term outcome of reoperation in patients with mechanical valve dysfunction.