The MIE with intrathoracic anastomosis (Ivor-Lewis) is increasingly used for the treatment of mid and lower esophageal cancers. Nguyen et al. preferred the operative approach is the laparoscopic/thoracoscopic Ivor Lewis resection (4). Other studies have also shown that the MIE Ivor-Lewis is safe and effective (5-8), particularly in reducing perioperative complications such as RLN injury, lung infection, and anastomosis fistula (3,9). However, Walther et al. (10) found that the additional esophageal resection of 5 cm in the neck group did not increase tumor removal and survival; on the other hand, it did not adversely influence morbidity, anastomotic diameter or eating. However, Bruno Walther’s conclusions are based on the thoracotomy and esophagogastric manual anastomoses in the neck. Whether these conclusions are suitable for new technologies?

This paper tried to compare the safety, feasibility, and short-term outcomes between MIE Ivor-Lewis approach and MIE McKeown approach for the treatment of middle and lower thoracic esophageal cancer.

This was a retrospective study. The ethics committee of our institution approved the study protocol. All the patients collected after the research begun had clear indications and clinical purpose for MIE and provided written informed consents.

The data of 72 consecutive patients with esophageal cancer who underwent MIE McKeown or MIE Ivor-Lewis was retrospectively analyzed. All patients were diagnosed as esophageal cancer by pathological criteria using upper endoscopy and biopsy specimen analysis. Simultaneously, every patient had a comprehensive pre-operative evaluation consisting of clinical presentation, physical examination, pulmonary function tests, electrocardiography, cardiac echocardiography, contrast-enhanced computed tomography (CT) scans of the chest and abdomen, and barium meal assessment. Based on clinical assessments, the inclusion criteria of this study were as follows:

The exclusion criteria of this study were as follows:

After general anesthesia and endotracheal intubation, the patient was placed in the left lateral decubitus position. The surgeon and thoracoscopic technician standed on ventrally part of the patient. Three ports were made: a 1 cm optical port was placed in the 7th intercostal space at mid-axillary line; the utility port, a 2 cm incision expanded with a protection sleeve, was placed in the 5th intercostal space at the anterior axillary line; the other port was 1.5 cm incisions placed in scapular line at the 8th intercostal space. First, the right RLN lymph nodes were dissected and the mediastinal pleura were exposed at the level of the inferior pulmonary vein to commence esophageal mobilization. The azygos venous arcade was ligated using silk to expose the esophagus. After mobilizing the thoracic esophagus from the hiatus to the thoracic inlet, an aggressive mediastinal regional lymphadenectomy was carried out. If necessary, the thoracic duct was mobilized and ligated above the diaphragm.

After completing the thoracoscopic procedure, the patient was rotated to a dorsal decubitus, with the neck extended and turned toward the right. The surgeon stood at right side of the patient, with surgical assistance positioned to the right (camera) and the left side of the patient. Pneumoperitoneum was established with 12−15 mmHg with CO2, following which, five abdominal trocars were inserted, a forcep is placed through the 5 mm trocar below the xiphoid process to grasp the gastrohepatic ligament for liver retraction. The procedure of laparoscopic abdominal exploration was described in detail by Dr. Tan (13).

An approximate 5 cm oblique incision was made over the anterior border of the left sternocleidomastoid muscle. The mobilization of neck esophagus, left neck lymphadenectomy and construction of gastric conduit (diameter 3−5 cm) was described in detail by Dr. Zhu (11) and Dr. Tan (13). With the control and skill of the technique, a lot of surgical refinements were added to the knowledge on technology. Ultimately, the gastric conduit was pulled up to the left neck through the posterior mediastinum, assisted by the rubber tube to enable esophagogastric mechanical anastomosis. Nasogastric feeding was performed in MIE McKeown Group.

The laparoscopic portion of the MIE Ivor-Lewis approach was first performed and the thoracoscopic procedure was similar to the MIE McKeown approach. The only difference was that the adipose tissue of lesser curvature need to be cleared in abdominal cavity.

After completing the laparoscopic procedure, the patient was rotated to the left lateral decubitus position. The surgeon and thoracoscopic technician stood on ventrally part of the patient. Three ports were made: a 1 cm optical port was placed in the 7th intercostal space at mid-axillary line; the utility port, a 2 cm incision expanded with a protection sleeve, was placed in the 5th intercostal space at the anterior axillary line; the other incision was 3 cm incisions placed in scapular line at the 8th intercostal space. The mobilization of the thoracic esophagus and mediastinal regional lymphadenectomy was similar to the MIE McKeown. The hand-sewn purse string suture for esophagus was performed close to superior aperture of thorax (Figure 1). An incision was made 2−3 cm distal to the purse string. An anvil was placed into the esophagus and the purse string was tied and tightened. The esophagus was transected 5−10 mm distal to the purse sting. The gastric fundus was firstly resected using 1-2firings of Echelon 60 stapler (Ethicon Endo-Surgery, Cincinnati, Ohio, USA). A 3 cm incision was made in the lesser curvature and the body of the circular stapler (CDH stapler, Ethicon Endo-Surgery, USA) was connected to the anvil through the incision. An end-to-side gastroesophageal anastomosis was completed in the right thoracic cavity (Figure 2). The esophagus and lesser curvature were resected and the incision was blocked using 1-2firings of Echelon 60 stapler. The staple line of the gastric conduit was embedded with gastric muscular and serosa layers using prolene suture (Ethicon, Somerville, NJ, USA) (Figure 3) running suture. Nasogastric feeding was performed by interventional radiologic procedure if the post-operative potential or definite anastomotic leak was discovered.

Figure 1 The hand-sewn purse string suture for esophagus is performed (A) and the anvil is placed through the half cut of esophagus and then the string is tensed (B).

Clinical data, including patient demographics, tumor characteristics, operative features and the complications of perioperative period of the two groups, were collected. Medical charts were reviewed to identify complications as per the Society of Thoracic Surgeons National Database. Clinical information was recorded in Microsoft EXCEL for further processing. Statistical analyses were performed using the SPSS software (version 17.0) and using the Student’s t-test, and χ2 test. A two-sided P value of less than 0.05 was considered to be statistically significant.

This retrospective study included a total of 72 patients who received either MIE Ivor-Lewis or MIE McKeown. There were no significant differences in demographic and pathologic characteristics of patients (Table 1). 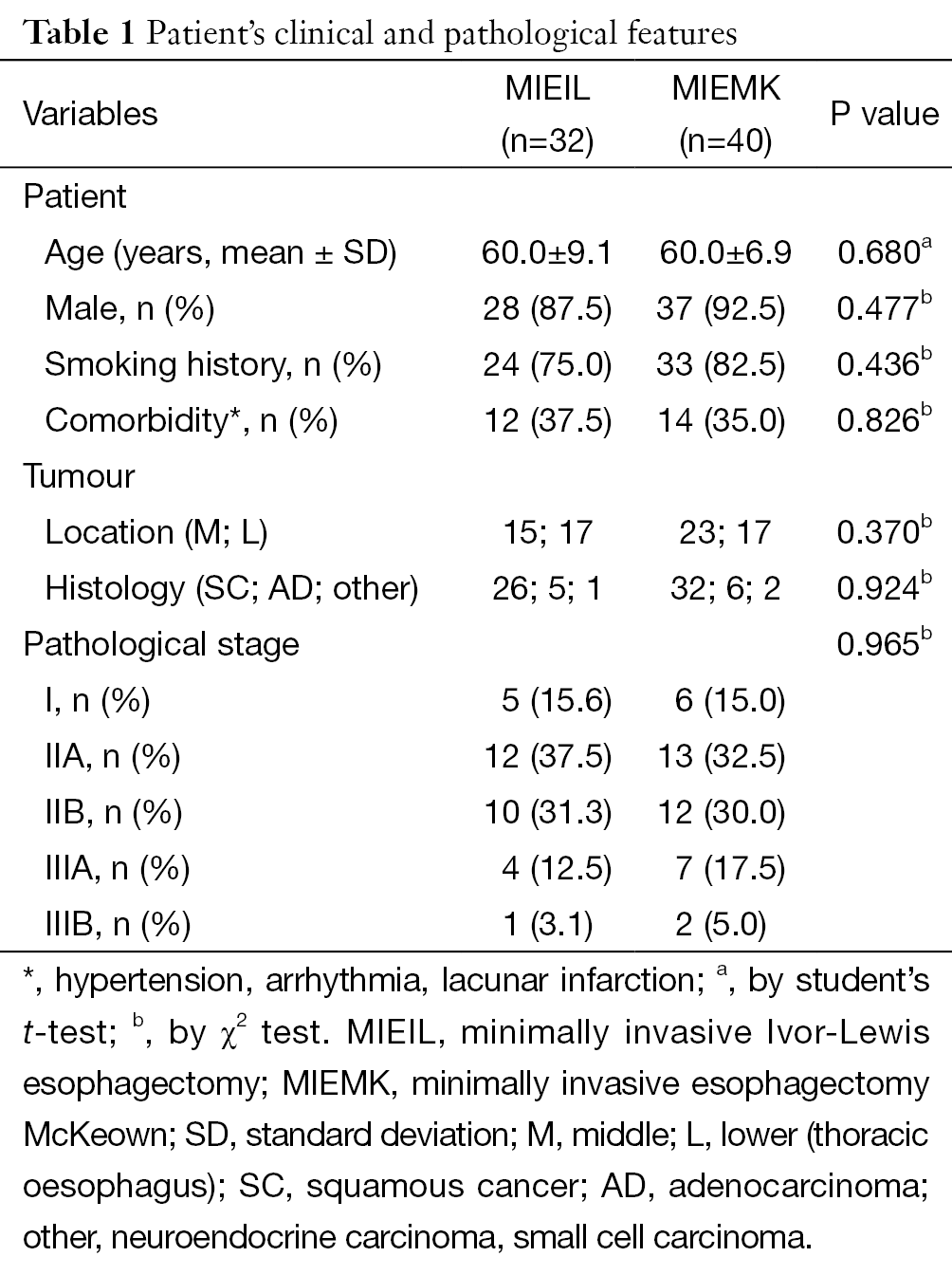 The intraoperative and postoperative outcomes are shown in Table 2. The mean operative time is 312.6±82.0 vs. 339.4±80.0, respectively (P>0.05). The mean number of lymph nodes harvested is 19.3rves vs. 20.2rves, respectively (P>0.05). One (3.1%) patient of MIE Ivor-Lewis group and three (7.5%) patients of MIE McKeown group required reoperations because of chylothorax. Four (10%) patients of MIE McKeown group required sending to ICU as a consequence of complications. There was no statistical significance with the mean hospital stay between two groups. 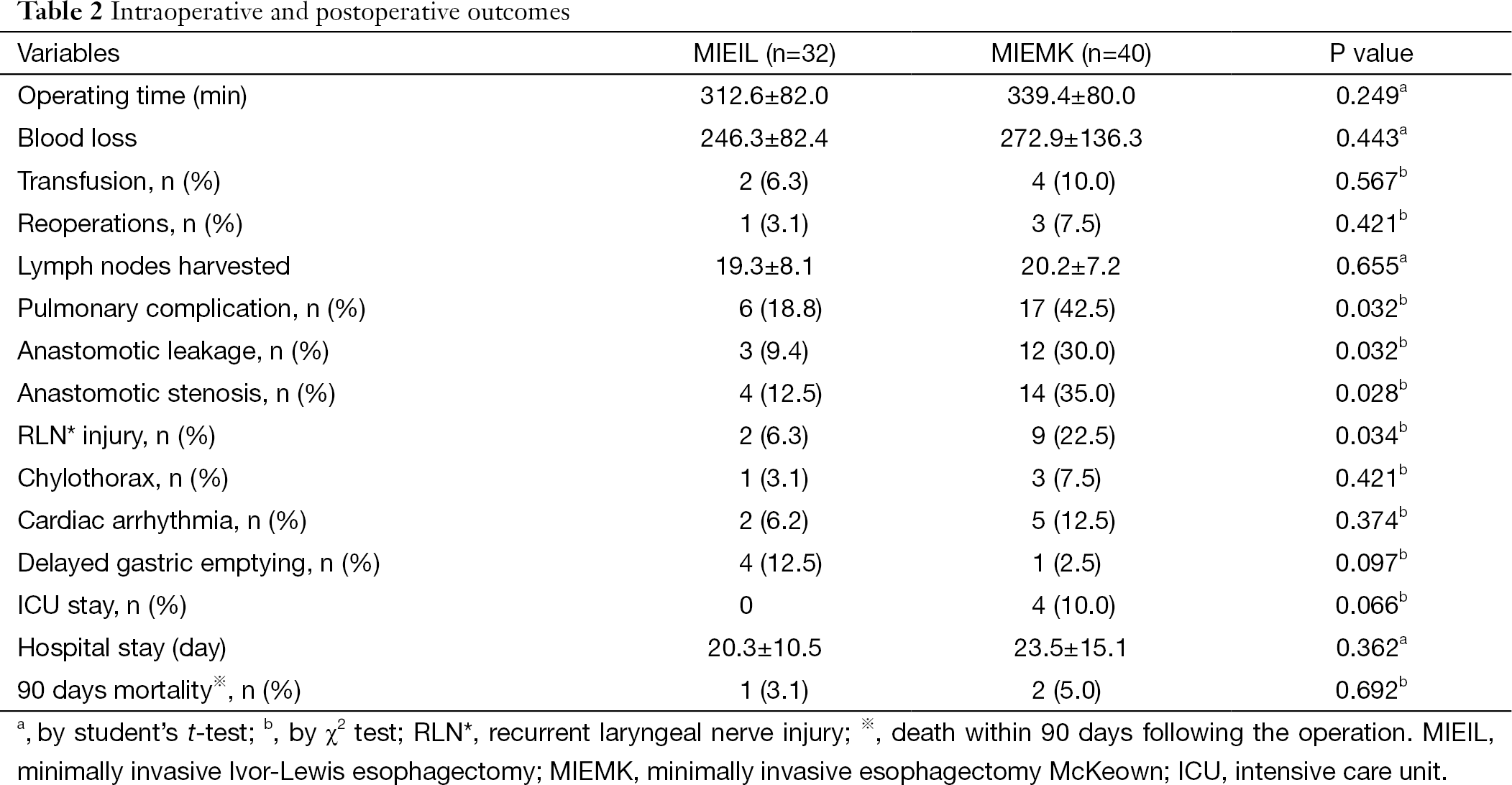 In the current study, the blood loss, morbidity, surgical outcomes and the 90-day mortality were not significantly different between the MIE Ivor-Lewis and the MIE McKeown groups, and this showed that the MIE Ivor-Lewis approach was safe and feasible. The number and location of lymphadenectomy, the location of tumor and the residual tumor of cutting edge were not significantly different between the two groups, and so the oncologic outcomes were equivalent. These findings are consistent with other reported studies (3,9) except for operative time. In the current study, the operative time was not significantly different between two groups because the intrathoracic anastomosis and the embedding of the staple line in the MIE Ivor-Lewis group were more complex and wasted more time.

However, there are some disadvantages for this kind of MIE Ivor-Lewis approach as such pleural pollution, not standard gastric conduit. During esophagogastric anastomosis, gastric contents would inevitably pollute thoracic cavity, and so the douching of thoracic cavity with massive disinfection fluid and physiologic saline was necessary. In the present study, the incidence of delayed gastric emptying and sour regurgitation in MIE Ivor-Lewis group was higher in compared with MIE McKeown, although there was no significant difference. The non-standard gastric conduit may be the potential reason. Lee et al. (15) described that a narrow gastric tube improved gastric emptying in a flow-visualization model. Shen et al. (16) reported that narrow gastric tubes were longer and less interfered in perfusion, which contributed to lower incidence of anastomotic leakage following minimally invasive esophagectomy.

The open Ivor-Lewis esophagectomy has been the classical operation for patients with mid and lower esophageal cancer. Owing to the technically demanding nature of this procedure, access to MIE Ivor-Lewis has been limited to select specialized centers (17,18). The MIE McKeown procedure is more convenient and easy to grasp for the beginners. However, perioperative complications such as RLN injury, lung infection, and anastomotic fistula with the MIE McKeown is more and more reconstructed. With the development of operative technic, the MIE Ivor-Lewis has become increasingly prevalent and showed preliminarily good outcomes (19-23).

However, Ivor-Lewis MIE is technically demanding. It requires extensive experience in both open and minimally invasive surgery. We gained some valuable lessons from the operations: (I) the adipose tissue of lesser curvature should be cleared in abdominal cavity to increase the length and decrease the width of gastric conduit; (II) if the gastric fundus was firstly resected using 1-2firings of Echelon 60 stapler before esophagogastric anastomosis, the gastric conduit will be easy to shape; (III) it is necessary to obtain a tight seal of the esophageal tissue around the anvil to avoid potential anastomotic leakage that an extra silk was tied and tightened around the anvil after the purse-string suture; (IV) the anastomotic site should be close to the vascular arcus, meanwhile, the blood vessels should be avoid to embedding the anastomotic stoma to prevent bleeding of anastomotic stoma.

In conclusion, the incidence of respiratory complications, anastomotic leakage and RLN lesion were found to lower in the MIE Ivor-Lewis group, meanwhile, the operative time, blood loss, perioperative mortality, the 90-day mortality and oncological outcomes were not significantly different. This suggests that the kind of MIE Ivor-Lewis approach is safe and feasible and seems to superior outcomes. The limitations of our study were its retrospective design and lack of exploration of the long-term effects, especially on quality of life. Therefore, a randomized controlled trial has been designed for expansion on our initial findings of following MIE Ivor-Lewis.

The authors would like to express their thanks to Dr. Lijie Tan for his comment on this work.