Lung cancer is a leading cause of death in Japan and other developed countries (1). More than 60% of patients with lung cancer, especially those with non-small cell lung cancer (NSCLC), are inoperable at the time of diagnosis and need to receive chemotherapy containing cisplatin (2). Recently, the percentage of adenocarcinomas among cases of NSCLC has been increasing (3), therefore, regimens containing cisplatin and pemetrexed are expected to be more frequently used (4). Cisplatin is one of the most active and widely used drugs, and still remains a standard component of combination chemotherapy for lung cancer (5). However, nephrotoxicity is a well-known side effect of cisplatin treatment (6). The logistic regression analyses have shown that the risk factors for the development of nephrotoxicity include older age, female gender, current smoking, and hypoalbuminemia (7). The nephrotoxic damage appears to be a clinical problem in 28-42% of patients who receive cisplatin (8). Therefore, many researchers have sought less toxic methods for administering cisplatin. It has been reported that hydration with magnesium supplementation can reduce the nephrotoxocity induced by cisplatin (8,9). In contrast, the protective effect of furosemide against nephrotoxicity is still controversial (10). In fact, Lehane et al. reported that high doses of furosemide cause nephrotoxicity, and it has been suggested that its use with cisplatin may aggravate the nephrotoxicity (11). To the best of our knowledge, there have been no studies that have examined the protective effect of hydration using saline lacking furosemide supplemented with magnesium and mannitol on the nephrotoxicity induced by cisplatin and pemetrexed in patients with advanced non-squamous NSCLC.

We recently established a new hydration method using 2,700 mL of saline supplemented with magnesium and mannitol without furosemide, and examined the effect of this hydration protocol on the protection against the nephrotoxicity induced by cisplatin and pemetrexed in non-squamous NSCLC patients.

Fifty patients with NSCLC who received cisplatin (75 mg/m2) plus pemetrexed (500 mg/m2) from May 2009 to March 2012 were retrospectively analyzed in this study. Chemotherapy was repeated every three weeks unless otherwise noted. Until July 2010, the old hydration protocol, comprising 3,100 mL of normal saline with mannitol (300 mL) and furosemide (20 mg), was used for 30 patients (old group). Because of the relatively high incidence of renal toxicity for old hydration group, the old hydration protocol was replaced with a new protocol, which contained 2,700 mL of normal saline lacking furosemide with mannitol (200 mL) and magnesium sulfate (8 mEq), and was given to 20 patients (new group). Both regimens are shown in Figure 1. Nephrotoxicity was evaluated by the both serum creatinine level and creatinine clearance (Ccr) and were compared between patients treated with the old and new protocols. The serum creatinine level was measured by an enzymatic method. The Ccr was calculated with Cockcroft & Gault’s formula (12). Hematological toxicities and non-hematological toxicities except renal toxicity were defined according to the Common Terminology Criteria for Adverse Event (CTCAE) version 4.0. The efficacy of chemotherapy was evaluated based on the response rate, disease control rate and overall survival according to the RECIST criteria, version 1.1. Comprehensive informed consent was obtained from all patients. 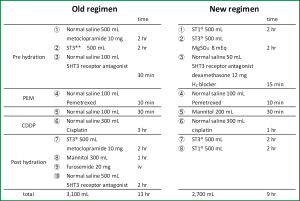 To evaluate the differences in the patients’ characteristics, toxicities, and chemotherapeutic responses, the chi-square test was used. The differences in the nephrotoxicity (evidenced by the ⊿serum creatinine and ⊿Ccr) between the old regimen and new regimen were analyzed with Mann-Whitney’s U test. To analyze the overall survival (OS), survival curves were drawn by the Kaplan-Meier method. The OS was calculated from the date of initiation of chemotherapy to the date of death. The OS rates were compared using the log-rank test according to the regimen (old regimen vs. new regimen). The univariate and multivariate analyses using a multiple regression analysis were performed to identify the independent factors associated with protection against nephrotoxicity in patients with non-squamous NSCLC who received cisplatin plus pemetrexed using the SPSS (IBM, USA, New York), software program, version 19. P values <0.05 were considered to be statistically significant.

The characteristics of all patients, the patients in the old regimen group and those in the new regimen group are shown in Table 1. The median age of all patients was 61 years old (range, 38-74 years old). Of the total of 50 patients, 30 patients were males (60%), 47 patients had adenocarcinoma (94%). The clinical stage was I and II in two, III in seven, IV in 33 and postoperative recurrence in eight patients. The ECOG performance status was 0 in 32 patients and 1 in 18 patients. As a co-morbidity related to the renal toxicity, 12 patients had hypertension (HT) and seven had diabetes mellitus (DM). There were no significant differences in the patient age, gender, performance status, histology, administered lines of treatment or incidence of DM between the groups. With regard to HT, patients in the new regimen group tended to less frequently have HT than those in the old group. However, there were no significant differences between the groups. In contrast, the old regimen group included more advanced stage patients compared to the new regimen group. 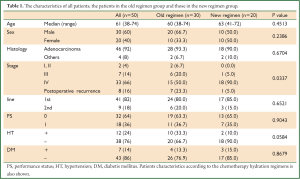 Table 1 The characteristics of all patients, the patients in the old regimen group and those in the new regimen group.
Full table

We also compared other toxicities, besides renal dysfunction, between the groups. Both groups demonstrated similar toxicity profiles, and there were no significant differences in any of the other toxicities between the groups (data not shown). Of note, the response rate and disease control rate in the two groups were also not significantly different (Table 2). Even though the overall survival in the new regimen group did not reach the median survival time, the overall survival in the new regimen group appears to be equivalent to that in the old regimen group (Figure 3). 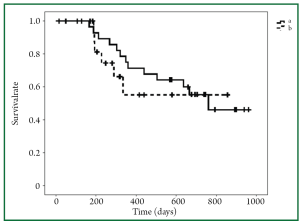 Figure 3 Overall survival. A comparison of the overall survival of patients with advanced non-squamous NSCLC between those treated using the old regimen group (a) and new regimen (b). There were no significant differences between the groups (P=0.4722).

We next performed a univariate analysis to identify the factors influencing renal toxicity. As shown in Table 3, renal toxicity was more frequently observed in males and in the old regimen group than in females and in the new regimen group. Interestingly, there were no differences in nephrotoxicity based on the patient age, histology, stage, performance status, or co-morbidities (HT and DM) in the two groups. According to the multivariate analysis (Table 4), only the new chemotherapy regimen was an independent factor predicting the protection of renal toxicity caused by cisplatin and pemetrexed. 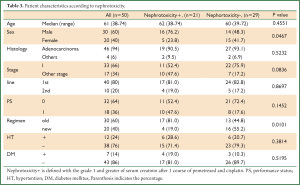 Table 4 Predictive factors of nephrotoxicity caused by pemetrexed and cisplatin according to the Multivariate analysis.
Full table

In this study, we clearly demonstrated that a new regimen utilizing 2,700 mL of saline lacking furosemide supplemented with magnesium and mannitol with rapid cisplatin infusion (300 mL of saline containing 75 mg/m2 cisplatin in 1 hour) would be useful to avoid the renal toxicity caused by cisplatin and pemetrexed, without any reduction in the efficacy of the regimen in patients with advanced non-squamous NSCLC. To exclude the possibility that the patient background, such as age, gender, stage and co-morbidities, would affect the renal toxicity induced by cisplatin and pemetrexed, a multivariate analysis using a multiple regression method was performed, and revealed that the new regimen was an independent predictive factor for the protection against the nephrotoxicity induced by cisplatin and pemetrexed.

Mannitol causes osmotic diuresis. Hayes and Frick revealed that mannitol decreased cisplatin nephrotoxicity (14,15). Clinically, mannitol reduces the urine concentration of cisplatin, and this effect is considered to be the mechanism underlying the amelioration of renal toxicity. Since most of the previous reports supported its effect on nephroprotection, except one controversial paper in which hydration with saline + mannitol was not nephroprotective compared to saline alone, mannitol was included in our new regimen (16).

It has been reported that supplementation with magnesium would affect in vitro and in vivo tumor growth (18). In fact, Parsons et al. have suggested that magnesium depletion decreases tumor growth (19). However, there were no statistically significant differences in the chemotherapeutic response or overall survival between the groups in our study, although the clinical outcomes appeared to be a little bit better in patients treated using the old regimen compared to those treated with the new regimen. Our results are supported by the report by Willox et al., in which the supplementation with magnesium did not modify the chemotherapeutic response or prognosis for patients with testicular cancer (9).

There are several limitations in this study, which need to be addressed. Our study population was relatively small and retrospective, large scale and prospective studies are needed to confirm the utility of this protocol. In addition, there are several differences between the old regimen and the new regimen besides magnesium and furosemide. For instance, dexamethasone is contained in the new regimen, while it is not contained in the old regimen. We could not exclude the possibility that addition of dexamethanose in the new regimen was useful to prevent cisplatin-induced nehrotoxicity.

In conclusion, we clearly demonstrated that saline hydration without furosemide, supplemented with magnesium and mannitol, with rapid cisplatin infusion ameliorated the nephrotoxicity caused by cisplatin and pemetrexed in patients with advanced non-squamous NSCLC.

We thank all of the collaborators involved in this study in our department at Jutendo University.