Contemporary role of minimally invasive thoracic surgery in the management of pulmonary arteriovenous malformations: report of two cases and review of the literature

Pulmonary arteriovenous malformations (PAVM) are direct fistulas between the pulmonary arteries and veins that bypass the normal intervening capillary bed. Although 80% are congenital, some can be acquired from trauma, thoracic surgery, mitral stenosis, amyloidosis and metastatic disease (1). Common clinical presentation includes dyspnea, epistaxis and hemoptysis. Treatment is recommended in virtually all patients to prevent paradoxical embolization and subsequent stroke or brain abscesses. Surgical resection with lobectomy through a thoracotomy was historically the mainstay of therapy (2), but has been replaced by percutaneous transcatheter embolization with coils or balloons. This technique is less morbid and has an overall success rate of 75% (3). Surgery is still however indicated in cases of failure of embolization or ensuing complications, as we illustrate in the following two cases.

A 38-year-old female with history of Osler-Weber-Rendu syndrome and multiple prior coil embolization of left upper and lower lobe PAVMs presented with recurrent severe hemoptysis, syncope, epistaxis and periodical TIAs. Computed tomography (CT) angiography of the chest demonstrated diffuse pulmonary hemorrhage in the left upper lobe parenchyma and a slight increase in the size of a 2.1-cm lingular AVM, despite embolization of the lingular artery just 2 months prior (Figure 1). A brain MRI was unremarkable and a pulmonary angiogram did not show any active source of hemorrhage and no evidence of a recanalized or new AVM. After a multidisciplinary discussion, we felt the patient was no longer suitable for repeat embolization. A ventilation perfusion scan was performed and showed a matched defect in the left upper lobe parenchyma. Therefore, the consensus was to proceed with a left upper lobectomy. Surgery was performed thoracoscopically and the patient was discharged home on post-operative day 3 without any complications. She remained completely asymptomatic at a 9-month follow up. Pathology showed vascular malformation lesions with aneurysmal dilatation and associated hemorrhage. 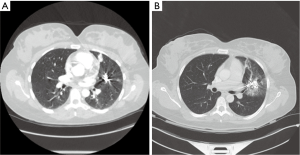 Figure 1 Computed tomography (CT) of the chest showing an arteriovenous malformation described as an enhancing 2.1×1.5 cm2 nodule in the lingula (A) with associated hemorrhage in the left upper lobe parenchyma (B).

A 67-year-old female with history of pulmonary AVMs and multiple prior embolizations presented with worsening and debilitating chest pain after embolization on the left side. CT of the chest showed evidence of a new consolidated area in the left lower lobe very close to the tip of the scapula and distal to the most recent coil (Figure 2). We felt she may benefit from resection of the infarcted area, in view of the close anatomic correlation, the pleuritic nature of her pain and a prior temporary response to local-regional blocks. The patient underwent a left thoracoscopy with wedge resection of the consolidated area that was adherent to the chest wall. Post-operatively, the patient had a complete resolution of her chronic pleuritic pain without any respiratory compromise. Pathology showed arterio-venous malformation associated with pulmonary hemorrhage and small foci of elastotic scarring, parenchymal atelectasis and necrosis.

Figure 2 Computed tomography (CT) of the chest showing a new consolidated area in the left lower lobe parenchyma, close to the tip of the scapula (white arrow) (A), with the coil evident a few cuts below (black arrow) (B).

Pulmonary AVM are rare with an estimated incidence of 2–3 per 100,000 in the general population (1). Treatment is necessary in symptomatic cases and to prevent potentially catastrophic neurologic complications. Embolization has become the first line of treatment since the first report by Porstmann in 1977 (4). Eligibility criteria for embolization include: symptomatic PAVMs, neurological complications and asymptomatic lesions with a feeding vessel > 3 mm in diameter (3). Besides being less morbid than traditional surgical approaches, this modality can be repeated in patients with progressive disease, which is common in the setting of hereditary hemorrhagic telangiectasia (3). However, the advent of thoracoscopy has triggered a renewed interest in the surgical treatment of PAVMs (5). This therapeutic modality is particularly attractive when percutaneous embolization is not feasible (severe contrast allergy, central PAVM), not successful (recanalization of feeding vessel and recurrence of fistula), and in cases of ensuing procedural complications (intrapleural rupture, pulmonary infarction). Resection can even be considered early on in the management of solitary peripheral malformations, as it provides definitive treatment with minimal morbidity.

In the first case we report a successful lobectomy in a patient with persistent and severe symptoms despite multiple embolizations at a North American center of excellence. To our knowledge this is the first report of a thoracoscopic lobectomy in this patient population. We performed a lobectomy as we did not think a wedge resection of the lingular AVM or a lingular segmentectomy would be technically feasible or enough to prevent recurrent symptoms. Factors to be considered in these cases include the importance of dividing the veins first to prevent intraoperative embolization, and avoidance of stapling across previously placed coils.

The second case illustrates the role of thoracoscopy in treating non life-threatening complications of PAVM embolization. Thoracoscopic wedge resection of persistent PAVM has been well described (5). The aim of surgery in our case was to relieve a debilitating chronic pain, which resulted from pleuritic irritation of an embolized PAVM. We believe that surgery in these cases should be a last resort option, and used in select patients with good anatomical and clinical correlation.

In conclusion, thoracoscopic surgery is safe, feasible and still has a role in the management of PAVM. A sublobar resection (wedge or segmentectomy) is preferred to lobectomy whenever technically feasible, in view of its lung conserving property and the progressive nature of the disease.