Since 2009, extracorporeal membrane oxygenation (ECMO) has been used as a successful rescue treatment for severe acute respiratory distress syndrome (ARDS) in patients failing conventional therapy (1). Recent advances in ECMO technology, and improved outcomes (2,3), have resulted in a renewed interest in the use of this therapy for various clinical problems. Recent studies have suggested that ECMO can be an alternative ventilator tool (4,5). Awake ECMO without mechanical ventilation has been attempted actively for various ARDS patients in several centers (6-13). However, it is difficult to maintain respiratory function using only awake ECMO during the aggravated phase of severe ARDS. Thus, a selective indication is necessary rather than targeting all patients with ARDS. We assessed whether an awake ECMO strategy would increase the successful weaning rates from ECMO and ventilator in patients with severe postoperative ARDS.

We conducted the Awake ECMO strategy in adults with postoperative ARDS except who had a high risk of failure for awake ECMO between August 2012 and May 2015. The patients who had a high risk of failure based upon clinical assessment were included if they (I) had the acutely impaired mental status (Glasgow coma score <8 or delirious); (II) had a high aspiration risk (absence of airway protective reflexes or inability to clear secretions); (III) had a hemodynamic instability requiring vasopressor therapy. These decisions to use awake ECMO were made by a multidisciplinary team including intensivists, pulmonologists and cardio-thoracic surgeons. According to the Extracorporeal Life Support Organization (ELSO) guidelines, ECMO was initiated in cases of hypoxic respiratory failure which is when partial arterial pressure of oxygen (PaO2)/fraction of inspired oxygen (FiO2) (P/F) ratio is <80 or FiO2 is >90% and the Murray score is 3–4. Data were retrospectively extracted from a prospectively updated registry of patients who had undergone ECMO and those in the intensive care unit (ICU) clinical database of our center. This analysis was approved by our local institutional review board.

The practice of ECMO has been implemented according to the ELSO general guidelines (14). We used veno-venous (VV) ECMO. Because the large double lumen cannula was not available in South Korea, in most cases, the right femoral vein was used for venous drainage, and the internal jugular vein was used for venous return, with the exception of two cases of subclavian return. If additional heart support was necessary during VV ECMO, we added a return cannula to the femoral artery and changed the mode from VV ECMO to veno-venoarterial (VVA) ECMO. After ECMO was initiated, the ECMO flow and gas flow were controlled to achieve PaO2 ≥70, PaCO2 ≤50, oxygen saturation (SpO2) ≥95 at an FiO2 of 1.0, positive end-expiratory pressure of 10 mmHg, tidal volume of 6 mL/kg, and a respiratory rate of 12/min. To minimize use of the ventilator, we decreased the ventilator mode to lung protective ventilation (LPV) under ECMO support (15). We did not decrease ECMO or the gas flow during weaning from the ventilator. We weaned the patient from the ventilator as soon as possible if PaO2 ≥70, PaCO2 ≤50, and SpO2 ≥95 was maintained under a fixed ECMO blood and gas flow. After weaning from the ventilator, we maintained awake ECMO without intubation (Figure 1). If arterial blood gases were maintained within target levels, ECMO weaning was started slowly according to the patient’s condition. We first reduced flow to 2,000 mL/min and maintained flow for sequential weaning if PaO2 and PaCO2 were maintained. Then, we slowly decreased sweep gas FiO2 until room air (21%) and gas flow were stopped, and PaO2 was maintained. If after more than 12 h after stopping sweep gas flow we confirmed a normal arterial blood gas analysis (ABGA), we removed the ECMO cannula. During all weaning procedures, we did not proceed to the next weaning step if the ABGA and radiological findings were not maintained within target levels (Figure 2). Analgesia-based regimen was used in combination with sedative drugs, and further sedative drugs including neuromuscular blocker were given for deeper sedation. During the weaning period of ventilator, sedative drugs were titrated to reach a Ramsay score of 2 or above. To control the agitated or anxious patients during the weaning periods, antipsychotics (eq haloperidol) or alpha-2 agonist (dexmedetomidine) was intermittently used. 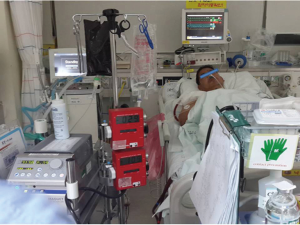 Figure 1 The patient was not intubated and was breathing spontaneously. 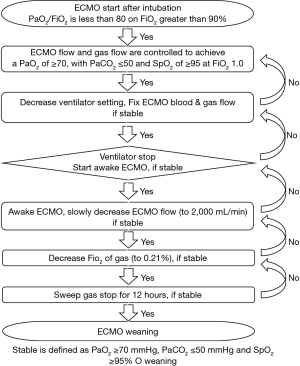 A total of 56 adult patients underwent ECMO due to ARDS during the study period. Eleven patients developed ARDS after surgery. Of those, 1 patient was excluded because the patient was delirious and had a high aspiration risk. He was impossible to maintain self- respiration without a ventilator during ECMO support. In all, 10 patients underwent awake ECMO for postoperative ARDS (7 males and 3 females; mean age, 52.1±7 years; range, 14 years; r, Table 1). All patients developed immediately ARDS after surgery; 7 had thoracic surgery (6 lung cancer and 1 huge mediastinal mass excision) and 3 had other surgeries (caesarean section, clavicle fixation, and Whipple operation). The causes of postoperative ARDS were four cases of postoperative pneumonia, three cases of massive hemoptysis, three cases of transfusion related acute lung injury, and one major surgery. All patients were candidates for ECMO according to the ELSO guidelines. The mean P/F ratio after intubation and mechanical ventilation was 59.0±14.6 (range, 28–78). This post-intubation value satisfied the ECMO insertion criteria in all patients. VV mode ECMO was used in eight patients, and VVA ECMO was required to maintain blood pressure in two patients.

Seven patients (70%) were weaned from ECMO without difficulty; one patient failed to maintain awake ECMO and was re-intubated after 2 days of awake ECMO. We re-tried this patient on awake ECMO after 4 days of ventilator care, and weaned the patient from ECMO 2 days later. We weaned a total of eight patients (80%) from awake ECMO. The ECMO duration of surviving patients was 9.13±2.2 days (range, 6–12 days), and mean ventilator use duration was 6.8±4.7 days (range, 2–16 days) in the successfully weaned group. The mean duration of awake ECMO was 3.6±1.7 days (range, 1–6 days) in the successfully weaned group. The duration of stay in the ICU was 14.6±6.8 days (range, 11–31 days), and the mean number of hospitalized days was 50.3±31.5 days (range, 23–105 days). Mean follow-up duration was 9.0±8.4 months (range, 1–27 months). Two cases failed awake ECMO and died due to disease aggravation. One patient had weak respiratory muscles and progressed due to long duration pneumonia and 8 days of ventilator care before receiving awake ECMO. Although the patiente to long dO2 and PaCO2 were stably maintained at normal levels without mechanical ventilation, the patient could not maintain self-respiration under ECMO support due to respiratory muscle fatigue and aggravation of underlying lung disease, even after ECMO flow was increased. The patient was re-tried on a mechanical ventilator after 3 days of awake ECMO. A second trial of awake ECMO was attempted after 2 days of additional ventilator care, but failed. He died due to multiple organ failure (MOF) caused by pneumonia and ventilator-induced lung injury (VILI) at 37 days post-intubation. Another patient had idiopathic pulmonary fibrosis (IPF) and underwent a lobectomy due to lung cancer. Pneumonia and acute exacerbation of the IPF occurred after postoperative bleeding and a massive transfusion. Weaning from the ventilator was possible 3 days post-intubation under ECMO support. However, despite blood PaO2 and PaCO2 were stably maintained by ECMO, pneumonia and IPF became aggravated during awake ECMO. The patient was re-tried on mechanical ventilation 4 days after awake ECMO; he could not be weaned from the ventilator and ECMO. Eventually, he died of MOF caused by pneumonia and VILI 33 days post-intubation. ECMO related adverse events such as hemorrhagic complication and ischemia did not occurred in all patients. Awake ECMO was comparatively safe.

Awake ECMO has been applied experimentally as a ventilator alternative in various clinical fields. In particular, it has gained general acceptance as an effective bridge treatment modality for patients awaiting lung transplantation (11). ECMO replaces mechanical ventilation and eliminates the risk of ventilator-associated complications. Furthermore, patients receiving aggressive physical therapy during ECMO support may be able to increase their pre-transplant conditioning (5). Thus, awake ECMO has become increasingly conducted to overcome the disadvantages of mechanical ventilation during the bridge to lung transplantation.

However, awake ECMO is not actively used during in treatment for severe ARDS. To date, because ECMO is used in patients refractory to conventional mechanical ventilation, it is difficult to maintain respiratory function using awake ECMO alone without mechanical ventilation. Although the first successful use of awake ECMO was reported by Hannover’s group, awake ECMO has not gained general acceptance as an alternative to conventional treatment (21,22). The first clinical results of Hannover’s group were poor, it were reported as 50% failure and 33% mortality. Considering the initial results, this strategy appeared not to be feasible in all patients with severe ARDS, who require full support of both a ventilator and ECMO during ARDS. Appropriate patient selection is essential to success. We decided that patients with postoperative ARDS would be the most appropriate group for the first trial of awake ECMO. Most surgical originating cases of ARDS are acute onset and most patients are not on long duration mechanical ventilation before ARDS onset, so the patients did not progress to respiratory muscle dystrophy. As well, because most causes of ARDS are bleeding or surgery-related complications, the cause can often be corrected within a short time. However, applying awake ECMO as a ventilator alternative is impossible in the disease-aggravated phase of severe ARDS because the patient’s condition is too poor to maintain respiration using ECMO monotherapy. Therefore, we applied awake ECMO strategy in a recovery period for safety issues. Several conditions related failure were also assessed prior to the initiation of awake ECMO. Awake ECMO was typically avoided in patients with impaired mental status, difficulty handling secretions, or need for airway protection and hemodynamic instability. As well, younger and muscular patients tended to show better outcomes after trial of awake ECMO. Thus, we suggest a trial of awake ECMO for hemodynamically stable patients without failure risk.

In conclusion, awake ECMO was a useful weaning strategy after severe postoperative ARDS, as it might safely decrease ventilator duration. Additionally, awake ECMO made it possible for patients to breathe spontaneously and might prevent the respiratory muscle dystrophy. However, excess application of awake ECMO did not increase the success rate of weaning in cases of severe ARDS. Thus, careful patient selection, the patient’s ability to tolerate the awake ECMO, and proper support of ECMO are essential to the successful use of awake ECMO. It is difficult to determine the factors related awake ECMO success in this cases because of the small number of cases. Further clinical research and trials should be performed.