Pannus formation after prosthetic valve replacement is fibro connective tissue overgrowth from the sewing cuff (1). It progresses slowly and is observed at a rate of 0.17–0.24% per patient per year for reoperation after mechanical valve replacement (2,3). Here, we report a unique case with repeated cerebral infarctions due to a clot-forming dome-shaped pannus.

A 52-year-old female with rheumatic aortic and mitral stenosis was treated by double valve replacement with mechanical prostheses (a 19-mm SJM Regent (St Jude Medical Inc., St Paul, MN, Brazil) and a 27-mm CarboMedics (CarboMedics Inc., Austin, TX, USA), respectively). She was followed up with normal sinus rhythm and with adequate anticoagulation therapy using warfarin combined with aspirin. However, she suffered from cerebral infarction caused by cardiac thrombus at 7 months after surgery. Even after switching aspirin to ticlopidine to strengthen anticoagulation therapy, she was repeatedly hospitalized for recurrent episode of cerebral infarctions. Transthoracic and transesophageal echocardiography had been performed repeatedly and demonstrated normal prosthesis function and thick tissue on the mitral annulus (pannus formation) without detectable thrombus.

At 56 years of age, she was referred to our hospital due to a fourth instance of cerebral infarction. Transesophageal echocardiography revealed floating masses around the mitral prosthesis as well as pannus formation, and confirmed prosthetic function within normal limits. To evaluate the patient-specific condition causing recurrence of stroke, we screened for the presence of lupus anticoagulant and anti-cardiolipin antibody for anti-phospholipid syndrome, and both were confirmed to be negative. We scheduled a redo surgery to prevent further stroke occurring by cardiac thrombus. Redo-operative findings revealed that the whole sewing cuff of the mitral prosthesis was entirely surrounded by a ‘dome-shaped’ white pannus, but without ingrowth into the orifice (Figure 1). A relatively fresh thrombus was hidden inside the dome (Figure 1A,B). Following complete excision of pannus (Figure 1C,D), endoscopic exploration of left ventricular cavity confirmed absence of pannus on ventricular side of the prostheses. There was no other structure that might hinder leaflet motion. The normal function of the aortic prosthesis without excess fibromatous tissue was also confirmed via an aortotomy. We decided that there was no need to replace the mechanical valves. 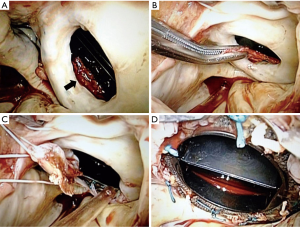 At three years after the redo surgery, normal prosthetic function without pannus formation and normal flow velocity have been confirmed by repeated transthoracic and transesophageal echocardiography, and there has been no recurrence of cerebral infarction.

Although the etiology of pannus formation has not been fully demonstrated, it is generally recognized to be associated with persistent inflammation caused by the prosthesis (1,2,4). Various factors such as surgical techniques, prosthesis structural design, inadequate anticoagulation, infection, and wall shear stress have also been reported to be associated with pannus formation (1,2,4). Teshima et al. studied the resected pannus after aortic valve replacement and reported that pannus formation is related to persistent neointimal development by protracted chronic inflammatory response via the expression of transforming growth factor-beta 1 (TGF-β1) (1). Although pannus formation can cause serious thrombotic valvular obstruction, pannus overgrowth can also be asymptomatic, without developing a transvalvular gradient (2).

The mechanism of thrombus formation in the present case seems unique, as a dome-shaped pannus was the cause of recurrent stroke. A narrow space between the leaflet and the pannus seemed to cause a turbulent blood flow pattern from the large left atrium into the ventricle through the prosthesis (5). Turbulent flow in the systolic phase as well as leakage flow including hinge occurring in the diastolic phase inside the dome-shaped pannus may trigger platelet activation, probably leading to clot formation (2,5). For such an environment, a small fragment of thrombus could cause infarction, and a large thrombus could not pass through the prosthesis but could become sandwiched between the pannus and the leaflet, potentially interfering with prosthesis function. It was also a unique point of this case that the pannus did not cause significant mitral stenosis in hemodynamics, nor did it interfere with the movement of the leaflets, thus preserving normal cardiac function. Therefore, despite the large pannus formed in the vicinity of the prosthesis leaflets, the only clinical manifestation was the repeated cerebral infarctions.

There is a concern regarding re-growth of the pannus. To prevent fibrous tissue overgrowth, we have administered tranilast, N-(3,4-dimethoxycinnamoyl) anthranilic acid, an anti-allergic drug with multiple effects, including the inhibition of TGF-β1 and the prevention of fibrosis in various pathophysiological settings, as an adjunctive therapy (6). We believe that the older a patient becomes, the less bio-reaction against the prosthesis is likely to be demonstrated. Moreover, preserving the prosthesis is probably better than re-replacement in order to minimize invasion and reduce bio-reaction because re-replacement requires many maneuvers around the mitral annulus.