Approximately 1 million people in the United States are diagnosed with a myocardial infarction annually, of which 30–50% will develop ischemic mitral regurgitation (MR) (1,2). Ischemic MR is the result of progressive left ventricular remodeling and dilatation, and is associated with worsening heart failure and a 2-fold increase in cardiovascular mortality (3). In patients with ischemic or viable myocardium and severe ischemic MR, coronary artery bypass graft surgery may reverse left ventricular remodeling, improve the function of the ventriculo-mitral complex, and ameliorate the MR (4,5). However, up to 40–50% of patients with moderate or greater ischemic MR will have persistence or worsening of the MR after revascularization alone, and mitral valve surgery is recommended in this population (6-8).

Mitral valve surgery for ischemic MR is centered on mitral valve repair utilizing a restrictive annuloplasty, or valve replacement with preservation of the subvalvular apparatus (9,10). Retrospective and observational data have reported a lower perioperative morbidity, preservation of the native mitral apparatus, and avoidance of long-term prosthesis deterioration and anticoagulation, as the benefits of valve repair over replacement (11,12). Conversely, a chordal-sparing valve replacement may provide a more durable correction of ischemic MR, as a restrictive annuloplasty has been associated with a greater than 50% recurrence of moderate or greater MR at long-term follow-up, which leads to progressive left ventricular remodeling and poor long-term survival (13).

In the first randomized trial to compare the efficacy of mitral valve repair versus replacement for ischemic MR, the CSTN randomized 251 patients with severe ischemic MR to valve repair utilizing a restrictive annuloplasty (n=126), or chordal-sparing valve replacement (n=125), and concomitant coronary artery bypass grafting, if clinically indicated (repair =74%; replacement =75%) (14). The valve repairs were performed with downsized complete rigid or semi-rigid annuloplasty rings, with the type of ring chosen left at the discretion of the surgeon. Severe ischemic MR was defined as an effective regurgitant orifice area (EROA) ≥0.4 cm2. All patients were treated with guideline-directed medical and cardiac resynchronization therapy. The primary endpoint of the trial was the degree of left ventricular reverse remodeling at 1 and 2 years post-operatively, as measured by the left ventricular end-systolic volume index (LVESVI).

In summary, the randomized CSTN trial revealed that for severe ischemic MR, there is no difference in mid-term survival or left ventricular reverse remodeling between a restrictive annuloplasty repair versus a chordal-sparing valve replacement, with a greater incidence of recurrent MR and heart failure complications observed with repair. Placed in the appropriate context, the trial results greatly expand our knowledge and provide the substrate for a new treatment paradigm for this complex disorder.

Insights from the CSTN randomized study

After a myocardial infarction, there is often progressive left ventricular remodeling and dilatation that ensues. In addition to annular dilatation, this leads to a loss of papillary muscle systolic shortening, increased interpapillary muscle distance, and displacement of the papillary muscles posteriorly, laterally, and apically (3,16,17). Tethering of the mitral leaflets from these geometric perturbations leads to a decreased zone of coaptation and leaflet malapposition, and ultimately, the development of ischemic MR (Figure 1). 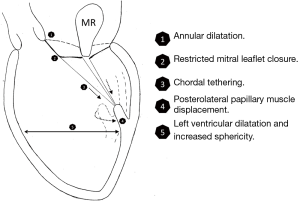 In this setting, a restrictive annuloplasty corrects the annular dilatation and flattening by reducing its septolateral diameter, however, it does not address the concomitant subvalvular dysfunction. Due to a sufficiently redundant anterior leaflet and active leaflet remodeling processes, almost a doubling in annular size can be tolerated before MR develops (18). Furthermore, an annuloplasty displaces the posterior annulus anteriorly, and augments posterior leaflet tethering by increasing its distance to the papillary muscles (19). These factors contribute to the development of recurrent MR due to insufficient leaflet mobility that is necessary for proper leaflet coaptation and valve competence (13).

An adjunct subvalvular procedure performed at the time of annuloplasty may improve the outcomes of mitral valve repair for ischemic MR, by supporting: (I) a reduction in septolateral annular dilatation; (II) movement of the anterolateral papillary muscle towards the annulus; (III) correction of the lateral displacement of the posteromedial papillary muscle; and (IV) decreased apical restriction of the posterior mitral leaflet (20,21). A recent meta-analysis compared the outcomes of 301 patients who underwent annuloplasty only, and 231 who had a combined annuloplasty and subvalvular repair, for moderate to severe functional MR. The subvalvular procedures included papillary muscle approximation or relocation, or secondary chordal cutting. At mid-term follow-up, when compared with an annuloplasty only, the addition of a subvalvular repair was associated with a 41% reduced risk of mortality (P=0.03), a 56% reduced risk of recurrent moderate or greater MR (P=0.001), and significant left ventricular reverse remodeling (22).

Of note, in the CSTN trial 11.9% of patients in the repair group underwent a combined annuloplasty and subvalvular repair. However, the surgical techniques utilized were not described, and the outcomes of these particular patients were not specifically analyzed.

Quantifying the severity and hemodynamic burden of ischemic MR

The severity of ischemic MR can be technically difficult to quantify, and the EROA may be underestimated by Doppler echocardiography. This is primarily due to the sensitivity of MR to left ventricular loading conditions, dynamic changes of leaflet tethering and valve closing forces within the cardiac cycle, and the assumption of a circular regurgitant orifice, when in fact, the orifice in ischemic MR is asymmetric and elliptical (23). Furthermore, significantly worse clinical outcomes have been reported for patients with ischemic MR at a lower EROA of ≥0.2 cm2, and this threshold is now recommended as the cutoff to define severe ischemic MR in the valvular heart disease guidelines (6,7,24).

The mean EROA in the CSTN trial was 0.4 cm2 in the repair group, and 0.39 cm2 in the replacement group, which is twice the EROA at which patients with ischemic MR experience a significant excess of adverse cardiovascular outcomes, and at which surgical treatment may be considered. Additionally, the baseline LVESVI in the two groups represented significantly remodeled and dilated left ventricles. Thus, it can be hypothesized that the CSTN data represented a population with advanced heart failure, in whom a restrictive annuloplasty alone would not suffice in treating the severe hemodynamic burden imparted by the MR, as was evidenced the high rate of MR recurrence in the repair group.

Previous studies have observed that in positive responders with left ventricular reverse remodeling after valve repair for ischemic MR, which has been defined as ≥15% reduction in LVESVI, the freedom from late moderate to severe recurrent MR is greater than 90% (25,26). Conversely, the persistence or progression of left ventricular remodeling increases the odds of moderate or greater MR recurrence by 6.7-fold (25). In patients randomized to mitral valve repair in the CSTN trial, the 1 and 2-year LVESVI was significantly smaller in patients who did not experience recurrent MR (47 cc/m2 and 43 cc/m2), as compared with patients who developed moderate or greater MR (64 cc/m2 and 63 cc/m2), P<0.001.

Functional predictors of continued left ventricular remodeling after valve repair include a wall motion score index >1.5, indicating advanced regional myocardial abnormalities, and a myocardial performance index >0.9, signifying global systolic and diastolic dysfunction (25). Prolonged heart failure symptoms for >18 months also predicts a poor post-operative response (26). While it was not applied in the CSTN trial, the concept of predicting reverse remodeling responders versus non-responders is intriguing, and may help identify patients in whom a restrictive annuloplasty alone would result in suboptimal outcomes.

Several pre-operative echocardiographic parameters have been shown to predict MR recurrence after mitral valve repair. In an analysis of the CSTN trial, the presence of a basal aneurysm and/or dyskinesis was observed in 62.1% of patients with recurrent moderate or greater MR versus 20.5% in those with no or mild MR (P<0.001), and was shown to be an independent predictor of MR recurrence in a multivariable model (area under the receiver operating characteristic curve =0.82) (27). Additionally, the presence of an increased left ventricular end-systolic diameter (LVESD) and left ventricular/mitral ring mismatch, which was defined as the LVESD/mitral annuloplasty ring size (LVESD/ring), directly correlated with the development of recurrent MR. For every 10 mm increase in LVESD, or 10% increase in the LVESD/ring, the odds of MR recurrence increased 70% (P=0.02) and 72% (P=0.01), respectively (28).

Measuring the pre-operative perturbations in the geometry of the mitral valve and subvalvular apparatus is also valuable is assessing the potential response to mitral valve repair (29). An interpapillary muscle distance >20 mm, measured from the tips of the papillary muscle heads at end-systole, has a sensitivity and specificity of 96% and 97% for the prediction of recurrent MR after restrictive annuloplasty (30). A mid-systolic mitral valve tenting height ≥11 mm (distance from the annular plane to the leaflet coaptation point) and tenting area ≥2.5 cm2 (area enclosed by the annular plane and valve leaflets) have also been reported as useful parameters, with a sensitivity and specificity of 81% and 84%, and 64% and 90%, respectively (31,32).

The American College of Cardiology/American Heart Association and the European Society of Cardiology/European Association for Cardiothoracic Surgery valvular heart disease guidelines recommend performing mitral valve surgery for severe ischemic MR at the time of coronary artery bypass graft surgery, and intervention may be considered in patients with severe symptoms that are refractory to guideline-directed medical therapy (6,7). A pathophysiologic-guided strategy incorporating subvalvular repair techniques may be preferable, in order to optimize the outcomes in patients at high-risk of recurrent MR (29).

In patients with limited left ventricular remodeling and dilatation, and preserved mitral valve apparatus geometry, a restrictive annuloplasty is a reasonable surgical approach to restore leaflet coaptation and valve competence. The addition of a subvalvular procedure to an annuloplasty repair may be considered in the presence of advanced left ventricular remodeling, basal aneurysm/dyskinesis, or anatomical perturbations of the mitral valve and subvalvular apparatus. These procedures include papillary muscle approximation or relocation utilizing graft and suture based techniques, and secondary chordal cutting. Alternatively, in cases of severe valve tethering or complex regurgitant jets, a chordal-sparing mitral valve replacement can be performed, with good peri-operative outcomes (Figure 2). 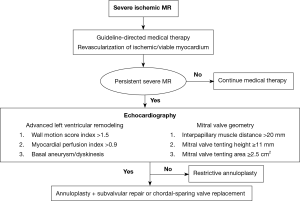 The CSTN trial has provided cardiovascular surgeons and physicians with valuable prospective data, and further insight into the treatment and subsequent natural history of ischemic MR. Importantly, it underscores the limitations of mitral valve repair in this population, and the necessity to expand the armamentarium of repair techniques to include procedures aimed at restoring the anatomical geometry of the mitral valve apparatus. Future randomized trials focused on a pathophysiologic-guided strategy for selection of patients who are candidates for combined annuloplasty and subvalvular repair, as opposed to conventional restrictive annuloplasty or mitral valve replacement, are paramount.