Esophageal cancer is one of the most malignant tumors threatening people’s lives and radical esophageal resection is one of the most effective means for the treatment of esophageal cancer (1,2). In traditional surgery, resection of the esophagus is conducted under direct vision, followed by dissection of the lymph nodes around the esophagus and reconstruction of the digestive tract. But the traditional Ivor-Lewis surgery or Mckeown procedure is associated with wider range of operation wound (3). The invasive esophageal cancer surgery also carries a high incidence of complications, and high morbidity still occurs although improvements have been made in surgical maneuvers and perioperative care (4). So the efforts to decrease the incidence of complications have stimulated interest in minimally invasive esophagectomy (MIE). The MIE approach shows the advantages of less discomfort, shorter length of stay and a faster recovery to baseline status than open approaches. As the experience and skills for thoracoscopic and laparoscopic surgery improve, thoracoscopic and laparoscopic esophagectomy has attracted increasing attention and become an alternative to open esophagectomy with fewer complications (5). The technique of thoracoscopic and laparoscopic radical esophagectomy described here is currently employed in the department of thoracic surgery at the First Affiliated Hospital of Zhengzhou University.

A 50-year-old female presented with progressive dysphagia for 3 months was admitted in our institute. Gastroscopic examination revealed a tumor with irregular erosion in the esophagus 27–32 cm away from the incisor teeth. Histological examination of the biopsy specimens led to a diagnosis of moderately differentiated squamous cell carcinoma. CT scan revealed the middle of the esophageal wall was thickening and mediastinal lymph nodes were not enlarged. The preoperative workup was standardized for the staging and consisted of barium swallow and bone scintigraphy. Formal spirometry showed a forced expiratory volume in 1 second (FEV1) of 3.12 (110.3% predicted), a forced vital capacity (FVC) of 3.68 (109% predicted) and a FEV1/FVC ratio of 83.15%. The preoperative clinical diagnosis was stage II esophageal squamous cell carcinoma. 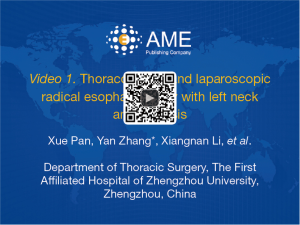 The surgeon stood at the patient’s left side, and the first assistant and camera operator at the patient’s right. Esophageal mobilization and dissection was performed essentially in the same manner as in open surgery. The first thing in the procedure was to explore the esophageal carcinoma, if it was resectable, sequential operation would be performed. The second step was thoracic operation: performing anatomical esophageal resection completely. Electric coagulation hook and ultrasonic scalpel were used in esophageal isolation from the top of the chest cavity to the diaphragmatic hiatus. After endoscopic separation, the azygos vein was isolated and dually clamped with Hem-O-Lok mechanisms, and cut. Paraesophageal lymph nodes, including subcarinal lymph nodes, lymph nodes along right and left recurrent laryngeal nerve, etc. were dissected routinely during the operation. Intraoperative care was required to avoid inadvertent injury to the vagus, phrenic, recurrent laryngeal nerves and membranous part of trachea. A chest tube was inserted through the observation port, and a mediastinal drainage tube from the secondary working port. The operation ports were then closed one after another.

The surgeon and camera operator stood at the patient’s right side, and the first assistant at the patient’s left. The next step was gastric dissociation: assisted by laparoscopy, the entire greater curvature of the stomach was mobilized by dividing the gastrocolic ligament with the Harmonic scalpel, preserving the right gastroepiploic vessels. The short and posterior gastric vessels were then divided along the greater curvature of the stomach. The left gastric vessels were isolated and divided with the Harmonic scalpel before doubled ligated with hemoclips. The lesser omentum was then incised, and the esophageal hiatus was isolated. Lymph nodes around the left gastric vessels, common hepatic vessels and celiac trunk were dissected during division of left gastric vessels.

A 3-cm incision was made to the leading edge of the left sternocleidomastoid neck. Then the cervical esophagus was separated, exposed, and divided. A 5-cm incision was made to the ventral midline to retract the esophagus and the stomach. The distal esophageal stump was sutured with long silk suture. The esophageal and gastric specimen was then pulled out of the upper midline incision. Gastric tube (3–4 cm in diameter) was then constructed from the distal lesser curve to preserve the right gastric vessels using the linear cutting staplers (Ethicon Endosurgery, Cincinnati, OH, USA). With the stomach lifted to the neck level, routine gastroesophageal anastomosis was performed. A nasogastric tube and nasointestinal tube were then passed into the gastric conduit and duodenum. The gastrotomy was then closed with one linear stapler. The abdominal tube was placed for drainage of the abdomen and the incisions were then closed to end the surgery. Total surgery time was 190 min and blood loss was 100 mL. Postoperative pathological exam suggested squamous cell carcinoma, without evidence of lymph node metastasis in any station (T2N0M0 stage IIb). The patient was discharged home on the 12th postoperative day.

Esophagectomy remains effective for patients with localized esophageal carcinoma. However, esophagectomy for cancer is considered to be one of the most extensive and traumatic oncological surgeries, which is associated with marked perioperative morbidity and mortality (7). Combined thoracoscopic and laparoscopic MIE is a safe and reliable option for esophageal carcinoma with smaller trauma, shorter hospital stay, less blood loss, less pain and better appearance, especially for the elderly and those with poor lung function (8).

The key to successful video-assisted radical thoracoscopic and laparoscopic surgery, as presented in our video, lies in smooth and safe division, separation and bleeding control under the endoscope. The adoption of Harmonic scalpel effectively avoids intraoperative bleeding, especially for those with rich vascularity. For omentum or mesenteric vessels in the size of 3 mm or below, Harmonic scalpel can be used to directly cut them off. For larger vessels, the Hem-O-Lok mechanism provides more secure and reliable approach to clamping any artery or vein in a diameter of 7 mm or below. In this case, CO2 pressure of pneumothorax at 8 mmHg can retract the right lung and stretch the mediastinum and avoid serious acidosis. During the procedure of esophageal mobilization, our experience is that one gauze is used to guide the mobilization of esophagus rather than pulling esophagus with traction belt. Hoarseness may occur as a complication due to injury to either of the recurrent laryngeal nerves during lymph node dissection. In our surgery, blunt dissection is preferred in this procedure, and the nerves should be clearly identified before lymph node dissection.